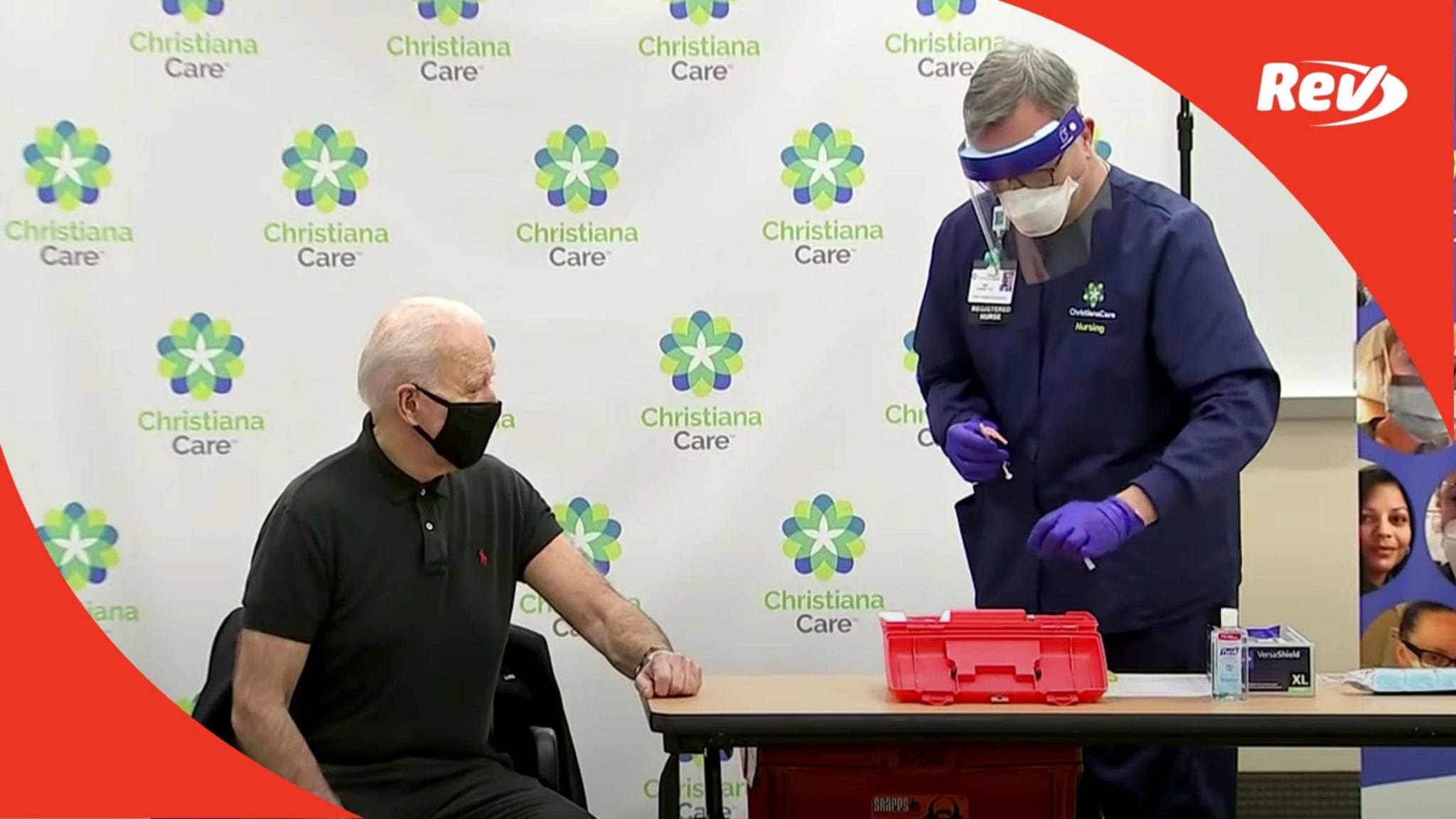 On January 11, Joe Biden got his second dose of the coronavirus vaccine. He also spoke to the press, saying he is not afraid to take the oath of office at the U.S. Capitol after the deadly riot. Read the transcript here.

Speaker 2: (00:50)
Mr. President-elect, do you still have confidence in your COVID team that they will be able to vaccinate 50 million Americans in the first 100 days?

Joe Biden: (00:57)
I do. Let me make a couple of brief statements. Number one, my number one priority is getting vaccine in people’s arms. Like we just did today, as rapidly as we can. And we’re working on that program now. I’ll be meeting on a Zoom call with my team a little later this afternoon. And I put together, which I’ll be announcing on Thursday, laying out the plan, the cost of how I want to proceed, the cost of what we have to do to be able to get the entire COVID operation up and running. 3,000 to 4,000 people a day dying is just beyond the pale. It’s just wrong. And we can do a lot to change it, number one. It’s going to be hard, it’s not going to be easy, but we can get it done.

Joe Biden: (01:54)
And secondly, wearing this mask, socially distancing, and making sure people are washing their hands on a regular basis is critically important. I was appalled when I saw, as a matter of fact, it was the distinguished Congresswoman from the State of Delaware, was when they showed the folks when they were in hiding, in effect, from the mob, she was going around trying to hand out masks for everybody. And the Republican colleagues wouldn’t take the masks. They think it’s irresponsible. And so we all have to make sure it’s not a political issue. It’s an issue of public safety and it’s going to get worse before it gets better in the mean time. I’m confident we can get done what we have to get done. I’ve been speaking with some of my Republican colleagues about being able to move on a second package sooner than later, but I’ll be making further presentation to you all on Thursday as exactly how much I’m looking for and the process by which [inaudible 00:03:01].

Speaker 2: (03:02)
Sir, are you all at all afraid of taking your oath outside given what happened?

Joe Biden: (03:16)
Wait, wait, wait. I can, because I haven’t seen these guys in a long time. I’m not afraid of taking the oath outside. We’ve been getting brief, but I am… I think it’s critically important that there be a real serious focus on holding those folks who engaged in sedition and threatened people’s lives, defaced public property, caused great damage, that they be held accountable. And I think that’s a view that is held by the vast majority of Democrats and Republicans in the Congress.

Speaker 2: (03:50)
Sir, are you aware that impeachment could potentially delay trying to pass the stimulus bill you’re about to propose?

Joe Biden: (03:58)
Well, look, my priority is to get first and foremost, the stimulus bill passed and secondly, begin to rebuild the economy in a way that I’ll be laying out on Thursday. I had a discussion today with some folks in the House, in the Senate. And the question is whether or not, for example, if House moves forward, which they obviously are, with the impeachment and send it over to the Senate, whether or not we have [inaudible 00:04:28] can bifurcate this? Can you go half day on dealing with impeachment, and half day getting my people nominated and confirmed in the Senate, as well as moving on the package? That’s my hope and expectation.

Joe Biden: (04:56)
I think President Trump should not be in office.