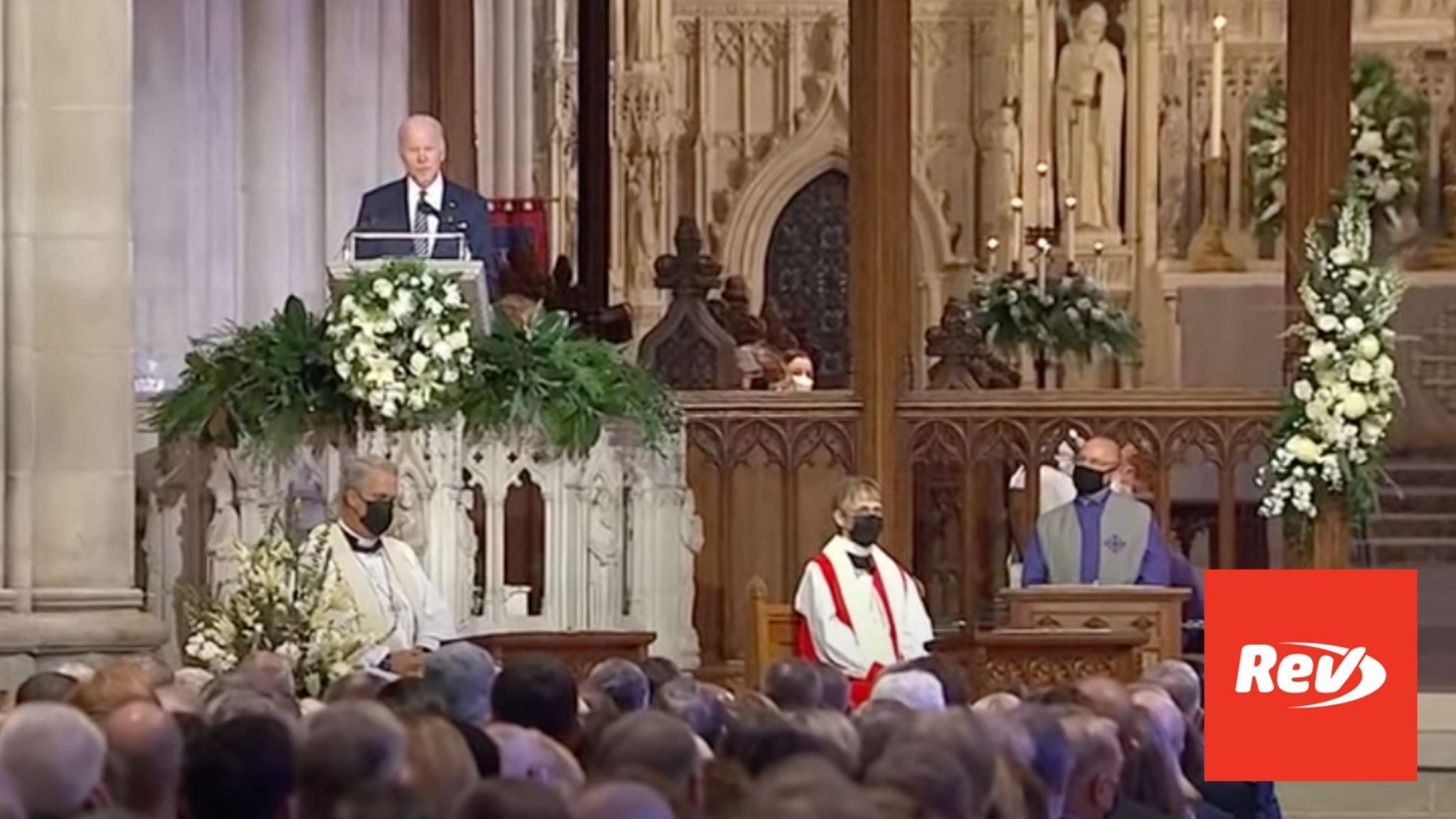 President Joe Biden gave a eulogy for former Senator Bob Dole at his funeral on December 10, 2021. Read the transcript of the speech here.

Joe Biden: (00:32)
Reverend clergy, distinguished guests. Among the many memories from 50 years of friendship, there is one that especially captures what Bob Dole was as a man and, in my view, as a patriot.

Joe Biden: (00:53)
We were on our way to the 50th anniversary of D-Day in Normandy, but we started in Italy, in Anzio. Much has been written about his time in Anzio, but to be there with him felt significantly different. He was on a mission in the mountains. Nazi gunfire and mortar fire was thick. A man was dying, men were dying. Facing a hail of bullets, Second Lieutenant Robert Joseph Dole hurled a grenade into an empty gun nest. He was trying to help a fallen comrade, his platoon radioman, when everything changed. And I mean, everything changed.

Joe Biden: (01:53)
His spine was damaged because fire tore across the hills, shattering his body. Grievously wounded. He was paralyzed. Dragged behind a wall, Bob would pass in and out of consciousness, dreaming of home as he lay bleeding in the foxhole for nearly nine hours. He was 21 years old.

Joe Biden: (02:23)
Nearly eight decades on, we gather here in a world far different from the mountainous battlefield in 1945. But there’s something that connects that past and present, wartime and peace, then and now: the courage, the grit, the goodness, and the grace of a Second Lieutenant named Bob Dole, who became Congressman Dole, Senator Dole; a statesman, husband, father, friend, colleague, and a word that’s often overused, but not here, a genuine hero; Bob Dole.

Joe Biden: (03:14)
Dean and the clergy officiating today’s service, President Clinton, Vice President Harris, Vice President Pence, and Cheney, and Quayle, Speaker Pelosi, Leader Schumer, Leader McConnell, members of Congress of both parties, past and present, members of the Cabinet, General Milley and leaders of our military, distinguished guests, and most of all, the Dole family. Elizabeth, it’s been said that, “Memory is the power to gather roses in winter.” Bob left you with 45 years’ worth of roses, of a life built and a love shared that’s going to guide you through the difficult days ahead.

Joe Biden: (04:39)
Bob Dole’s story is a very American one. Born and raised in a three-room house through the Dust Bowl and the Great Depression. Shipped out as a young man to World War Two. Wounded in battle on the same weekend that Franklin Delano Roosevelt was being mourned by millions. Bob came home, rebuilt his life, painful hour by painful day by painful week by painful month by painful year. Hearing he and Danny Inouye, who was wounded on a mountain not far from where he was, talk about the recovery they spent together for all those, literally, several years, it was astounding.

Joe Biden: (05:37)
God, what courage Bob Dole had. He then went to school on the G.I. Bill, came to Washington with the New Frontier, bravely voted for civil rights and voting rights in the years of the Kennedys, Lyndon Johnson, and Martin Luther King Jr. Ran for President on the ticket with Gerald Ford. And through the ages of Nixon, Carter, Reagan, Bush the elder, and Clinton, Bob was literally the master of the senate.

Joe Biden: (06:17)
We served together for 25 years. We disagreed, but we were never disagreeable with one another, not one time that I can think of. I found Bob to be a man of principle, pragmatism, and enormous integrity. He came into the arena with certain guiding principles that began with devotion to country, to fair play, to decency, to dignity, to honor, to literally attempting to find the common good. That’s how he worked with George McGovern to fight hunger in America, particularly as it affected children, and around the world.

Joe Biden: (07:08)
He worked with Teddy Kennedy and Tom Harkin to bring down the barriers of Americans living with disabilities; a profound change and profound act of grace. He worked with Daniel Patrick Moynihan to literally save Social Security because Bob believed every American deserved to grow old with their basic dignity intact. And over the opposition of many in his own party, and some in mine, he managed the bill that created the federal holiday in the name of Martin Luther King, Jr. Bob Dole did that.

Joe Biden: (08:55)
During the Depression, Bob’s parents moved into the basement of their three-room, not three-bedroom, their three-room home in Russell, Kansas, so they could rent out, “the upstairs.” Bob understood hardship. He had known hardship, and he never forgot it. He never forgot the people as well who sent him to Washington, people from Russell and from Kansas.

Joe Biden: (09:26)
Bob was a man who always did his duty, who lived by a code of honor. Almost seems strange to say that today, but he lived by a code of honor, and he meant it. Just as his colleagues, Republican and Democrat, looked at him, I think they saw him the same way I did. Just ask any who served with him at the time. Bob Dole fit my dad’s description. He said, “You must be a man of your word. Without your word, you’re not a man.” And Bob Dole was a man of his word.

Joe Biden: (10:09)
He loved his country, which he served his whole life. The Bible tells us, “To whom much is given, much is expected.” And Bob Dole, for all his hardship, believed he’d been given the greatest gift of all. He was an American. He was an American, and he felt it.

Joe Biden: (10:40)
Let’s be honest. Bob Dole was always honest, sometimes to a fault. He once endured the wrath of his fellow Republicans when there was a legitimate fight going on to defund Amtrak. Now, I’ve traveled over 1,200,000 miles on Amtrak because I commuted every single day. It came time for, literally, the deciding vote on whether we were going to defund Amtrak. And he cast the vote against his party, deciding to keep funding Amtrak. And obviously, you might guess, he was asked why, “Why would you do that?” He said, “It’s the best way to get Joe Biden the hell out of here at night so he’s not here in the morning.” Excuse my language. True story. Absolutely true story. God, I loved the guy.

Joe Biden: (11:47)
As I said, he was always honest. But Bob relished a good political fight, as much as anybody I’ve ever served with in the 36 years I was in the Senate. And Bob gave as good or better than he got. He was a proud Republican. He chaired his party. He led its caucus in the United States Senate, and he bore the banner as its nominee for Vice President and President of the United States.

Joe Biden: (12:19)
He could be partisan, and that was fine. Americans have been partisan since Jefferson and Hamilton squared off in George Washington’s cabinet. But like them, Bob Dole was a patriot. He was a patriot. And here’s what his patriotism teaches us, in my view, as Bob Dole himself wrote at the end of his life, and I quote him, “I cannot pretend that I’ve not been a loyal champion of my party, but I always served my country best when I did so first and foremost as an American.” End of quote. “First and foremost as an American.” That was Bob Dole. Liddy, that was your husband, that was your dad. Always as an American.

Joe Biden: (13:23)
He understood that we’re all part of something bigger than ourselves. And he really did, I felt. He really understood it, and that compromise isn’t a dirty word, it’s the cornerstone of our democracy. Consensus is required in a democracy to get anything done. That’s how you get things done. Again, listen to Bob Dole’s words, not mine. I’m quoting him again, “I learned that it is difficult to get anything done unless you can compromise. Not your principles, but your willingness to see the other side. Those who suggest that compromise is a sign of weakness, misunderstand the fundamental strength of democracy.” End of quote.

Joe Biden: (14:23)
In his final days, Bob made it clear that he was deeply concerned about the threat to American democracy, not from foreign nations, but from the division tearing us apart from within. And this soldier reminded us, and I quote, “Too many of us have sacrificed too much in defending that freedom from foreign adversaries to allow our democracy to crumble under a state of infighting that grows more unacceptable day by day.” Grows more unacceptable day by day. He wrote this when he knew his days were numbered, in small numbers.

Joe Biden: (16:29)
For Bob will be with us always, cracking a joke, moving a bill, finding common ground. In his final message to the nation, Bob said that whenever he started a new journey, whenever he started a new journey, the first thing he would do, and I quote, “is sit back and watch for a few days, then start standing up for what he thought was right.” End of quote. Bob has taken his final journey. He’s sitting back now, watching us. Now, it’s our job to start standing up for what’s right for America.

Joe Biden: (17:25)
I salute you, my friend. Your nation salutes you. And I believe the words of the poet R.G. Ingersoll, when he described heroism, better fit you than anyone I know. And Ingersoll wrote the following, “When the will defies fear, when duty throws the gauntlet down to fate, when honor scorns to compromise with death, that is heroism.” May flights of angels sing thee to thy rest, Bob. God bless Bob Dole. God bless America. And may God protect our troops.