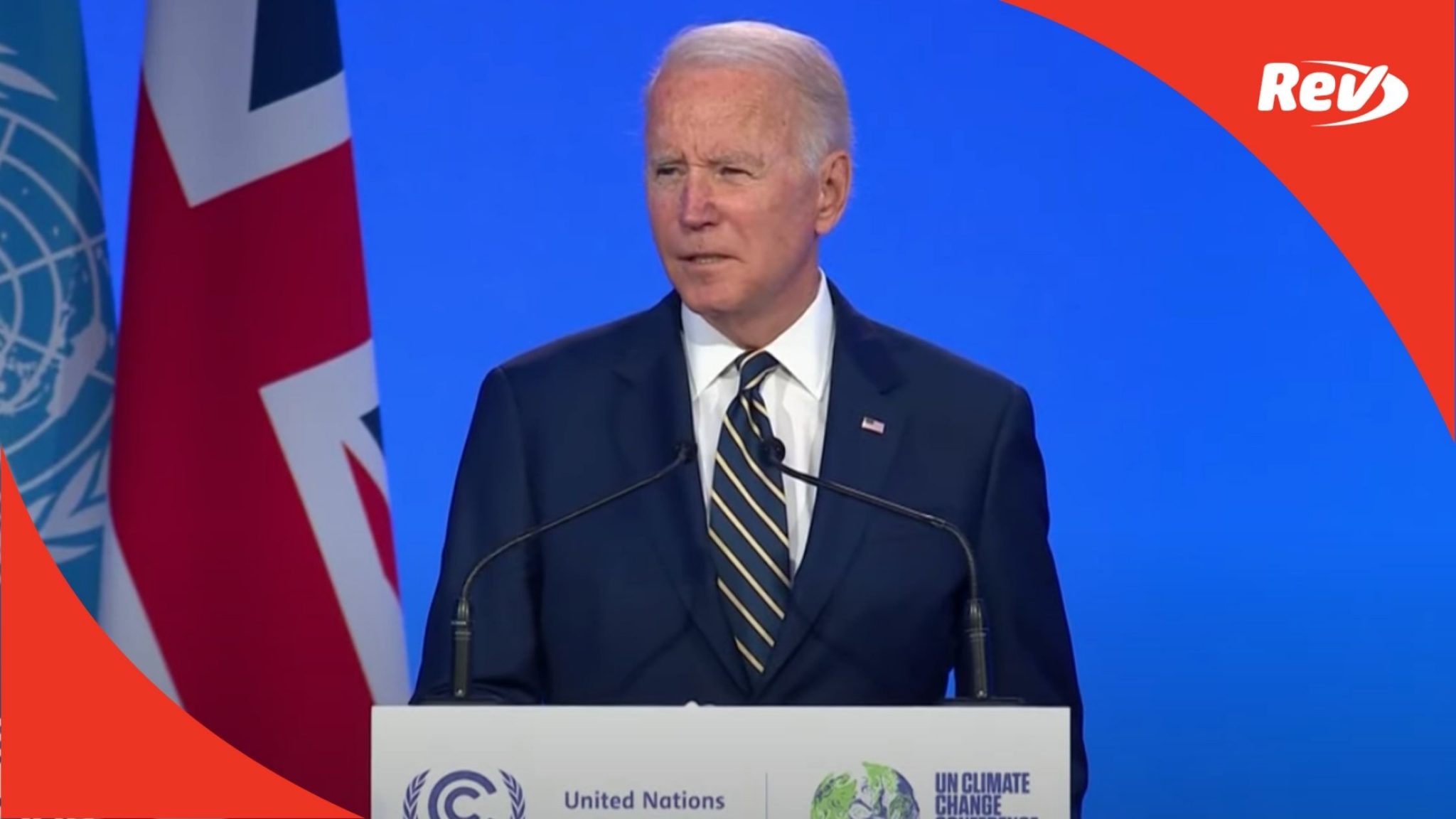 President Joe Biden spoke at the COP26 climate summit in Glasgow on November 1, 2021. Read the transcript of the speech here.

President Biden: (00:01)
To state the obvious, we meet with the eyes of history upon us and the profound questions before us. It’s simple, will we act, will we do what is necessary? Will we seize the enormous opportunity before us or will we condemn future generations to suffer? This is the decade that will determine the answer. This decade. The science is clear, we only have a brief window left before us to raise our ambitions and to raise to meet the task that’s rapidly narrowing. This is a decisive decade in which we have an opportunity to prove ourselves. We can keep the goal of limiting global warming to just 1.5 degree celsius within our reach, if we come together, if we commit to doing our part of each of our nations with determination and with ambition. That’s what COP26 is all about.

President Biden: (01:06)
Glasgow must be the kickoff of a decade of ambition and innovation to preserve our shared future. Climate change is already ravaging the world, we’ve heard from many speakers. It’s not hypothetical. It’s not a hypothetical threat. It’s destroying people’s lives and livelihoods and doing it every single day. It’s costing our nations trillions of dollars, record heat and drought, fueling more widespread and more intense wildfires in some places and crop failures in others, record flooding, and what used to be once in the century storms are now happening every few years.

President Biden: (01:51)
In the past few months the United States has experienced all of this and every region of the world can tell similar stories. And in an age where this pandemic has made so painfully clear that no nation can wall itself off from borderless threats, we know that none of us can escape the worst that you to come if we fail to seize this moment. But ladies and gentlemen, within the growing catastrophe, I believe there’s an incredible opportunity. Not just for the United States, but for all of us. We’re standing at an inflection point in world history, we have the ability to invest in ourselves and build an equitable clean energy future. And in the process create millions of good paying jobs and opportunities around on the world. Cleaner air for our children, more bountiful oceans, healthier forest and ecosystems for our planet.

President Biden: (02:54)
We can create an environment that raises a standard of living around the world. And this is a moral imperative, but it’s also an economic imperative. If we fuel greater growth, new jobs, better opportunities for all our people, and as we see current volatility and energy prices rather than cast it as a reason to back off our clean energy goals, we must view it as a call to action. High energy prices only reinforce the urgent need to diversify sources, double down on clean energy development and adapt promising new clean energy technology so we can not only remain overly reliant on one source of power to power our economies and our communities. It’s in the self interest of every single nation, and this is a chance in my view, to make a generational investment in our economic resilience and in our workers and our communities to throughout the world. That’s what we’re going to do in the United States.

President Biden: (04:04)
My Build Back Better framework will make historic investments in clean energy, the most significant investment to deal with the climate crisis that any advanced nation is made ever. We’re going to cut US greenhouse gas emissions by well over a gigaton by 2030, while making it more affordable for consumers to save on their own energy bills with tax credits for things like installing solar panels, weatherizing their homes. Lowering energy prices will also deliver cleaner air and water for our children, electrifying fleets of school buses, increasing credits for electric vehicles and addressing legacy pollution. It will incentivize clean energy manufacturing, building the solar panels and the wind turbines that are growing energy markets of the future. Which will create good paying union jobs for American workers and something that none of us should lose sight of.

President Biden: (05:03)
When I talk to the American people about climate change I tell them it’s about jobs. It’s about workers who will lay thousands of miles of transmission lines of clean, modern, resilient power grid. The auto workers who will build the next generation of electric vehicles and electricians who will install a nationwide network of 500,000 vehicle stations to power them throughout my country. The engineers who will design new carbon capture systems and the construction workers who will make them a reality. The farmers will not only help fight global hunger, but also use the soil to fight climate change. The communities that were vitalize in themselves around new industries and opportunities. And because we are taking all these actions, the United States will be able to meet the ambitious target I set in the leader summit and climate back in April, reducing US emissions by 50 to 52% below 2005 levels by 2030. We’ll demonstrate to the world, the United States is not only back at the table but hopefully leading by the power of our example. I know it hasn’t been the case, and that’s why my administration’s working over time to show that our climate commitment is action not words.

President Biden: (06:26)
On my very first day in office, I took action and returned the United States to the Paris Agreement. Since then, our administration has been hard at work on locking clean energy breakthroughs to drive down the cost of technologies that will require us to achieve net zero emissions and working with the private sector on the next generation of technologies that will power clean economy of the future.

President Biden: (06:50)
Over the next several days, the United States will be announcing new initiatives to demonstrate our commitment to providing innovative solutions across multiple sectors from agriculture to oil and gas, to combating deforestation, to tackling hard and to abate industries. We’re planning for both short term sprint to 2030, that will keep 1.5 degree celsius in reach and for a marathon that will take us to the finish line and transform the largest economy in the world into a thriving, innovative, equitable, and just clean energy engine of net zero for a net zero world.

President Biden: (07:30)
That’s why today I’m releasing the US long term strategy, which presents a vision of achieving the United States goal of net zero emissions economy wide by no later than 2050, and reinforces an absolutely critical nature of taking bold action with the decisive decade. We’re also going to try to do our part when it comes to helping the rest of the world take action as well. We want to do and more to help countries around the world, especially developing countries, accelerate their clean energy transition, address pollution, and ensure the world we all must share a cleaner, safer, healthiest planet. We have an obligation to help.

President Biden: (08:13)
At the United in September, I announced that my administration is working with Congress to quadruple our climate finance support for developing countries by 2024, including significant increase in support for adaptation efforts. This commitment is made possible to each of our collective goals and mobilizing a hundred billion annually for climate finance, but mobilizing finance at the scale necessary to meet the incredible need is an all hands on deck effort. As other speakers today mentioned, governments in the private sector and multi-lateral development banks must also do the work to go from millions to billions to trillions the necessary effect of this transition.

President Biden: (09:03)
Today, I’m also submitting a new adaptation communication laying out how we’ll implement the global goal of adaptation as well as announcing our first ever contribution to the adaptation fund. But our commitment is about more than just financing, that’s a critical piece of it, but we’re also going to support solutions across the board. In lead up to this gather in the United States, joined our G7 partners to launch a Build Back Better World Initiative. We also reconvened the major economies forum on energy and climate to launch transformative actions and to raise ambition. And together with the European Union, we’re launching a Global Methane Pledge to collectively reduce methane emissions, one of the most potent greenhouse gases, by at least 30% by the end of the decade. More than 70 countries have already signed a up to support rapid reduction in methane pollution, and I encourage every nation to sign on. It’s the simple most effective strategy we have the slow global warming in the near term.

President Biden: (10:07)
My friends, if we’re to recognize that a better, more hopeful future, every nation has to do its part with ambitious targets to keep 1.5 degrees in reach and specific plans of how to get there, especially the major economies. It’s imperative we support developing nations so they can be our partners in this effort. Right now we’re still falling short. There’s no more time to hang back or sit the of the fence or argue amongst ourselves. This is a challenge of our collective lifetimes, the existential threat to human existence as we know it. And every day we delay the cost of inaction increases. So let this be the moment that we answer history’s call, here in Glasgow. Let’s this be the start of a decade of transformative action that preserves our plan and raises the quality of life for people everywhere. We can do this, we just have to make a choice to do it. So let’s get to work and thank you. Those of us who are responsible for much of the deforestation and all the problems we have so far have overwhelming obligations in the nations, who in fact were not there, have not done it, and we have to help much more than we have thus far. God bless you all, and may God save the planet. Thank you.