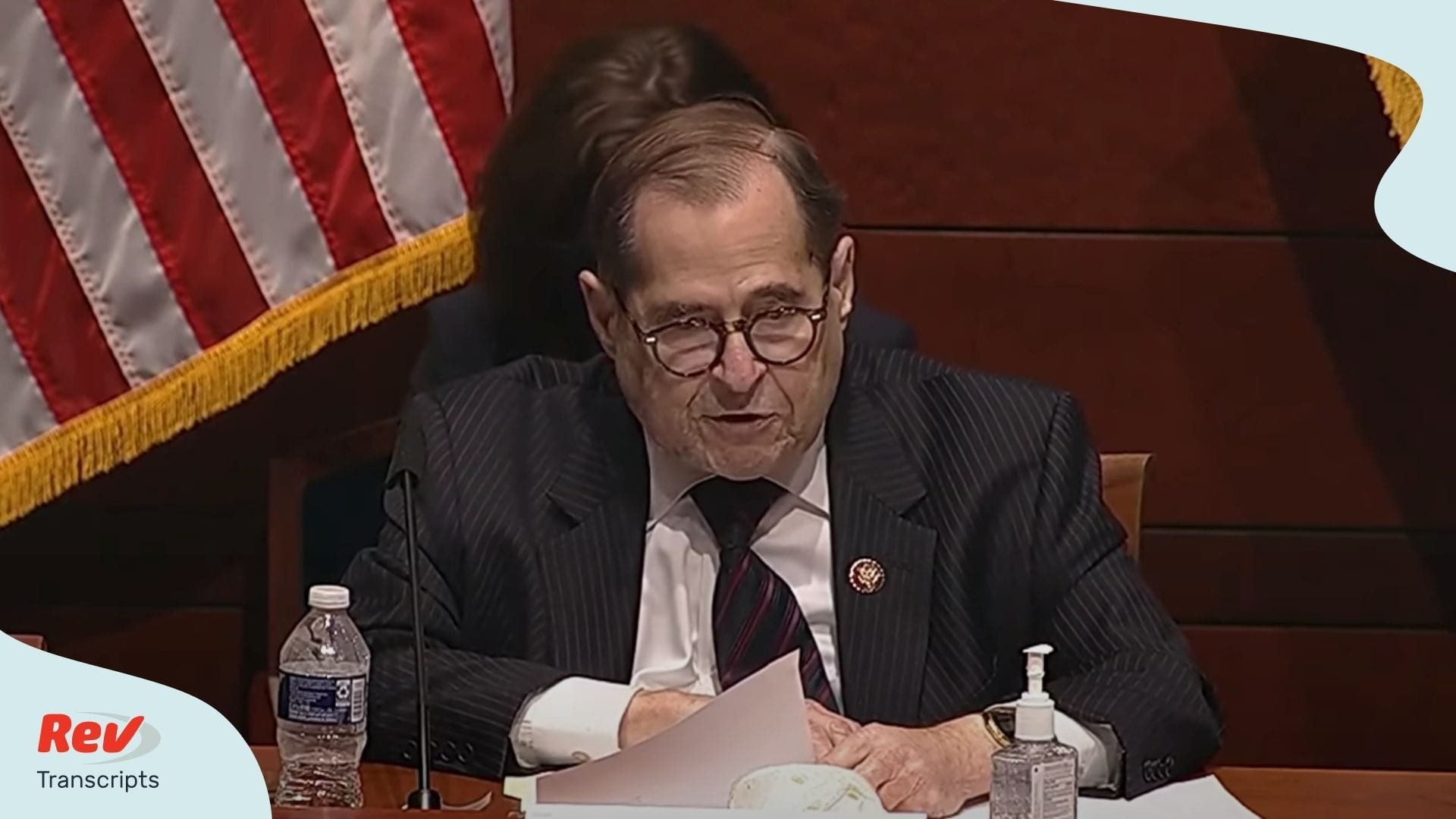 Jerry Nadler: (00:00)
Thank you for your testimony. We will now proceed under the five minute rule with questions, and I will recognize myself for five minutes. On July 22nd, you joined the president as he announced the expansion of Operation Legend, a initiative…

Jerry Nadler: (00:20)
Let me start that again. On July 22nd, you joined the president as he announced the expansion of Operation Legend, an initiative to combat violent crime in Kansas City with approximately $61 million in DOJ grants. I am confused, however, as to the purpose of launching Operation Legend at this moment in time. In December of last year, you announced that the department would divert over $70 million in grants to seven US cities under an initiative called Operation Relentless Pursuit, correct?

Jerry Nadler: (00:59)
At the same July 22nd press conference, you initially claimed that over 200 arrests had been made under Operation Legend, correct?

Jerry Nadler: (01:13)
The US Attorney’s Office for the Western District of Missouri later confirmed that only a single arrest had been made under the auspices of Operation Legend, correct?

Jerry Nadler: (01:24)
And the 199 other arrests were made under Relentless Pursuit or other programs. Well, that was correct. I think you could be forgiven for being confused. Operation Legend appears to be little more than a repackaging of existing operations in these cities. So why all the drama? Why join the president, the White House to announce a bold new operation that appears to be neither bold nor new? Understandably, Americans are very suspicious of your motives here. There are those who believe you are sending federal law enforcement into these cities, not to combat violent crime, but to help with the president’s reelection efforts. The president has made clear that he wants conflict between protesters and police to be a central theme of his campaign. So let me ask you directly, Mr. Barr. Yes or no. Yes or no. Did you rebrand existing projects under the [inaudible 00:02:21] Legend in order to assist the president in an election year?

Jerry Nadler: (02:26)
Mr. Attorney General, would you agree with me at least on principle that it is improper for the Department of Justice to divert resources and law enforcement personnel in an effort to assist the president’s reelection campaign?

William Barr: (02:38)
No. Mr. Chairman, in the fall, we did inaugurate an anti-crime initiative because we were concerned about increasing violent crime in a number of cities, and we call that Relentless Pursuit. Unfortunately, COVID intervened and our agents who were detailed for these assignments could not perform the operation. So the operation was squelched by COVID, so we couldn’t complete or make much progress on Relentless Pursuit. However, in the intervening time, we saw violent crime continuing to rise, and a lot of that was triggered by the events after the death of George Floyd. So we did reboot the program after COVID started breaking and we could commit the law enforcement resources to actually accomplish the mission, which is to reduce violent crime. Now I regret that COVID interrupted our law enforcement activities, but it doesn’t obviate the fact that there is serious violent crime in these cities, these police departments and mayors have been asking us for help, and we have put in additional federal agents and investigators to help deal with it.

Jerry Nadler: (04:00)
Now, yes or no, have you discussed the president’s reelection campaign with the president, or with any White House official, or any surrogate of the president?

William Barr: (04:10)
Well I’m not going to get into my discussions with the president.

William Barr: (04:20)
I’m a member of the Cabinet and there’s an election going on. Obviously the topic comes up.

William Barr: (04:24)
Well, the topic comes up in Cabinet meetings and other things.

William Barr: (04:28)
It shouldn’t be a surprise that the topic of the election comes up.

Jerry Nadler: (04:31)
I didn’t say I was surprised. I just asked if you’d done that. So as part of those conversations with the president or his people about the reelection campaign, have you ever discussed the current or future deployment of federal law enforcement?

Jerry Nadler: (04:47)
In connection with what you just said, in connection with your discussions with the president or with other people around him of his reelection campaign, have you discussed the current or future deployment of federal law enforcement?

William Barr: (05:00)
Well, as I say, I’m not going to get into my discussions with the president, but I’ve made it clear that I would like to pick the cities based on law enforcement need and based on neutral criteria.

William Barr: (05:11)
No, I’m not going to discuss what I discussed with the president.

Jerry Nadler: (05:13)
Can you commit today that the department will not use federal law enforcement as a prop in the president’s reelection campaign?

William Barr: (05:20)
We are not using federal law enforcement-

Jerry Nadler: (05:20)
I just want to close with this thought. You really can’t hide behind legal fictions this time, Mr. Barr. It’s all out in the open where the people can see what you are doing for themselves. The president wants footage for his campaign ads, and you appear to be serving it up to him as ordered. In most of these cities, the protests had begun to wind down before you marched in and confronted the protestors. And the protestors aren’t mobs. They are mothers, and veterans, and mayors. In this moment, real leadership would entail deescalation, collaboration, and looking for ways to peaceably resolve our differences. Instead you use pepper spray and truncheons on American citizens. You did it here in Washington. You did it in Lafayette Square. You expanded to Portland. And now you are projecting fear and violence nationwide in pursuit of obvious political objectives. Shame on you, Mr. Barr.