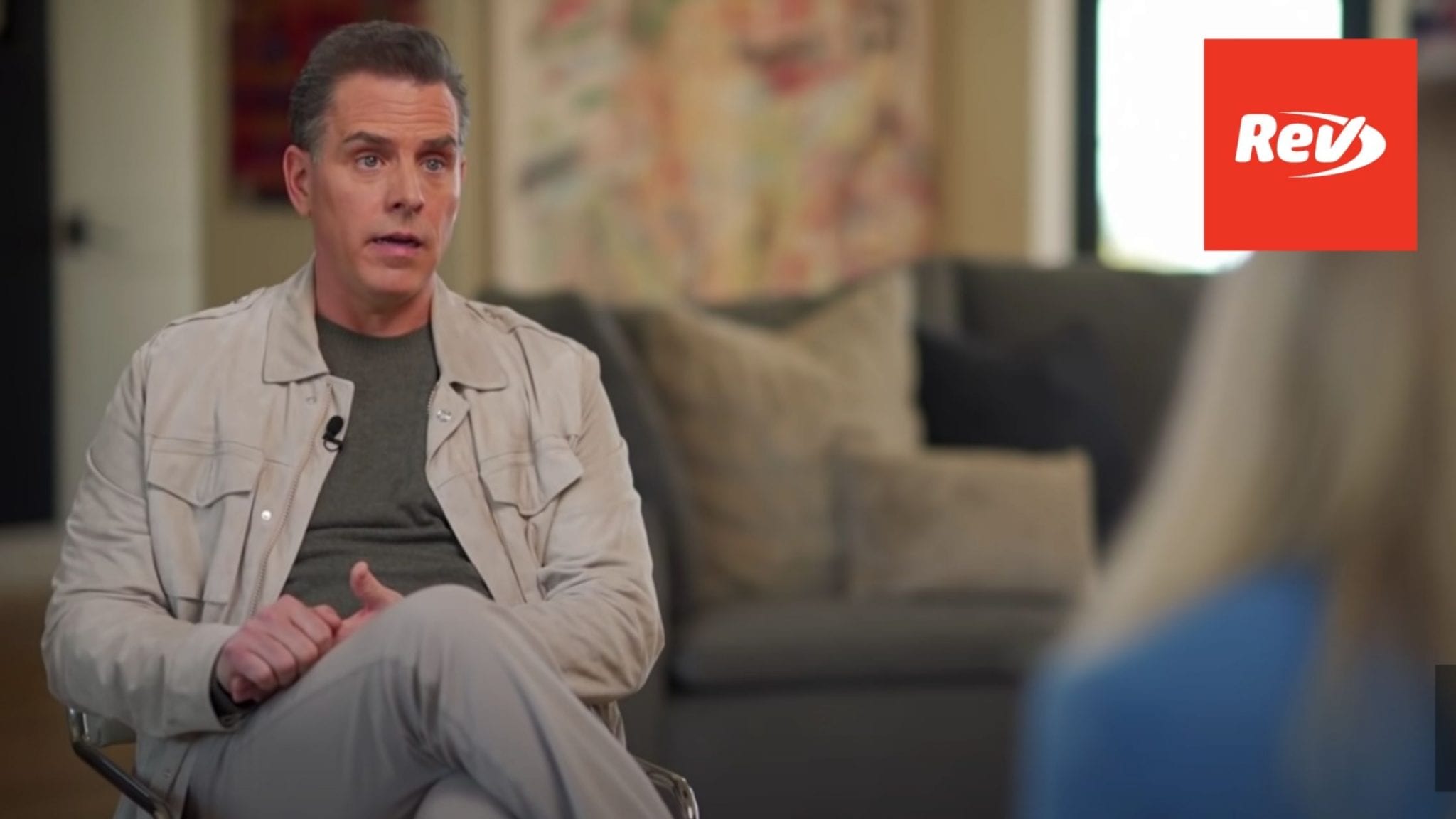 President Joe Biden’s son, Hunter Biden, sat down for an interview with CBS that aired on April 4, 2021. He discussed his struggles with addiction and his memoir “Beautiful Things.” Read the transcript of the interview here.

Tracy Smith: (00:00)
Hunter Biden, the son of President Joe Biden, has known no shortage of controversy in recent years, which means there was plenty to discuss when we sat down to chat not long ago.

Tracy Smith: (00:13)
You’ve said your dad always saw the good in you through all of this. Was there ever a time when you thought, “Okay, there’s no way. He’s going to give up on me. I’ve done it now.”

Tracy Smith: (00:27)
Hunter Biden is the president’s second son, a Yale trained lawyer and a lobbyist who’s well-publicized drug problems, personal scandals, and business dealings seem to have kept him in the headlines for all the wrong reasons.

Tracy Smith: (00:41)
There’s a current Department of Justice investigation into your finances.

Hunter Biden: (00:49)
I can’t, but I can say this, is I’m cooperating completely, and I am absolutely certain, 100% certain that at the end of the investigation, that I will be cleared of any wrongdoing.

Tracy Smith: (01:09)
From the time he was a toddler, Hunter Biden and his older brother Beau were fixtures in Joe Biden’s public life. When they were both hurt in the 1972 car crash that killed their mother and sister, their dad, a newly elected US senator, took his oath of office in a hospital room.

President Joe Biden: (01:29)
If in six months or so there’s a conflict between my being a good father and being a good senator, which I hope will not occur, we can always get another senator but they can’t get another father.

Tracy Smith: (01:37)
But as the Biden sons got older, their paths diverged. Beau was a war veteran and Delaware attorney general with his sights set on higher office. But Hunter, who was kicked out of the Navy Reserve after failing a drug test, grappled with substance abuse for years. After Beau died of brain cancer in 2015, Hunter says he was binge drinking vodka so heavily that his father intervened.

Hunter Biden: (02:05)
He came to my apartment one time, and this was when he was still in office as vice-president, and so he kind of ditched his secret service, figured out a way to get over to the house. I said, “What are you doing here?” He said, “Honey, what are you doing?” I said, “Dad, I’m fine.” He said, “You’re not fine.”

Tracy Smith: (02:23)
He sought and got help in rehab. But, in time, he fell off the wagon and deeper into the abyss.

Tracy Smith: (02:31)
You would wake up some mornings, I shouldn’t even say some mornings because you slept for like 15 minutes at a time, and be looking for crack and just smoke whatever was there?

Hunter Biden: (02:43)
Yeah. I spent more time on my hands and knees picking through rugs, smoking anything that even remotely resembled crack cocaine. I probably smoked more Parmesan cheese than anyone that you know, I’m sure, Tracy.

Hunter Biden: (03:09)
Yeah. Yeah. I went one time for 13 days without sleeping, and smoking crack and drinking vodka exclusively throughout that entire time.

Tracy Smith: (03:21)
Hunter Biden’s struggle with his personal demons is a big part of his new book, from an imprint of Simon & Schuster, a Viacom CBS company. The title, Beautiful Things, is a phrase he and his brothers shared to remind each other of the good in life.

Tracy Smith: (03:53)
Beau’s death shook the entire Biden family. But the way Hunter dealt with his grief made headlines when he began dating his brother’s widow.

Tracy Smith: (04:03)
After Beau died, you started a romantic relationship with Hallie, his widow.

Hunter Biden: (04:14)
I think people were confused by it, and I understand that. I really do. To me, it’s not something that is difficult to explain because it came out of a real overwhelming grief that we both shared. We were together and trying to do the right thing, and that grief turned into a hope for a love that maybe could replace what we lost, and it didn’t work. It didn’t work.

Tracy Smith: (04:57)
You said you lost clients over this, you lost business over this.

Tracy Smith: (05:03)
You had to step down from the World Food Program.

Hunter Biden: (05:05)
Yeah. Yeah. Well, I made a lot of decisions that I probably shouldn’t have made. There was a lot more compassion and understandings for the people that knew me, but it was a horrible time, too.

Tracy Smith: (05:17)
And then there’s this. In 2014, the younger Biden took a job on the board of a Ukrainian energy company, Barisma Holdings. At a time when his father, who was then vice-president, had an active role in US policy toward Ukraine. It raised eyebrows at the time, but by the 2020 elections, Hunter Biden was the center of a political firestorm.

Donald Trump: (05:40)
Hunter got thrown out of the military. He was thrown out, dishonorably discharged for cocaine use.

Donald Trump: (05:52)
… he made a fortune in Ukraine, in China, in Moscow, and various other places.

Tracy Smith: (05:58)
Looking back, did you make a mistake taking a spot on that board?

Tracy Smith: (06:14)
But you must have seen the optics. Even back then, you must have… How could you not have foreseen that this was going to look bad?

Hunter Biden: (06:22)
Because I really didn’t. I’m being as honest with you as I possibly can. All I know is that not one investigative body, not one serious journalist has ever come to the conclusion that I did anything wrong or that my father did anything wrong.

Tracy Smith: (06:38)
But the rumors lived on. In October, 2020, a New York Post article said that emails purportedly showing shady dealings in Ukraine by Hunter Biden were found on a laptop computer that he supposedly left in a Delaware repair shop in 2019. The details were sketchy at best. Last month, a declassified intelligence report said that before the election the Russians had launched a smear campaign against Joe Biden and his family.

Tracy Smith: (07:07)
It does not specifically talk about your laptop. Was that your laptop?

Hunter Biden: (07:15)
I really don’t know what the answer is. That’s the truthful answer.

Tracy Smith: (07:34)
And you didn’t drop off a laptop to be repaired in Delaware?

Hunter Biden: (07:43)
Usually he calls me right before he goes to bed just to tell me that he loves me.

Tracy Smith: (07:50)
Hunter Biden says he’s rebuilding now and sober since he married South African film producer, Melissa Cohen, in May, 2019. If his story means anything, he told us, it’s that the only thing more powerful than a monstrous addiction or eviscerating grief is a family’s love.

Hunter Biden: (08:33)
Yeah. Yeah. But, by the way, he’s always done that. Always. He talks to each one of us. But I’ll tell you why. Because he’s lost… Because he, like me, knows what it’s like not to be able to pick up the phone and talk to your son.