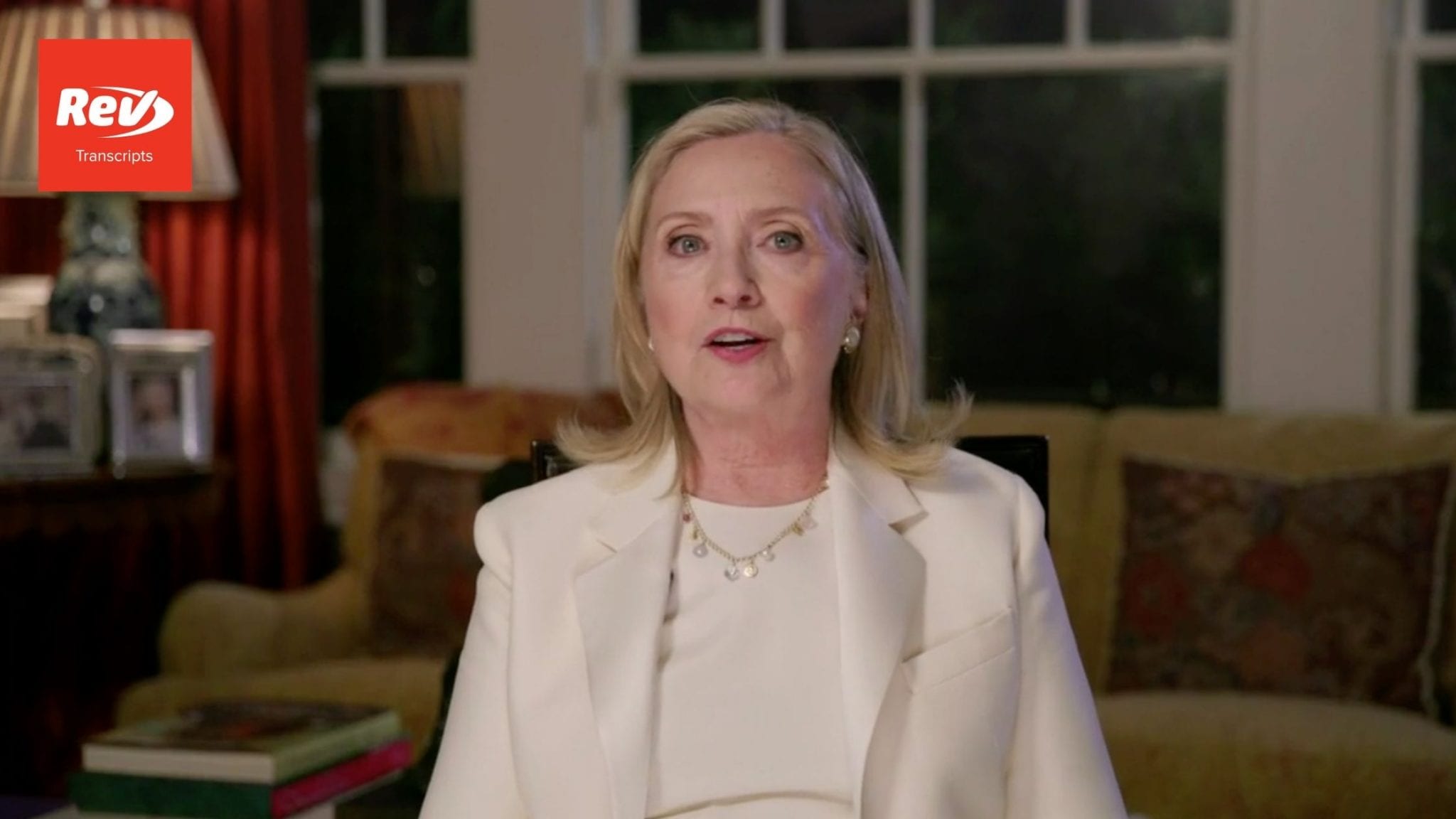 Hillary Clinton: (00:01)
The morning after the last election, I said, “We owe Donald Trump an open mind and the chance to lead.” I meant it. Every president deserves that. And Trump came in with so much set up for him, a strong economy, plans for managing crises, including a pandemic. Yes, we Democrats would have disagreed with him on many things, but if he had put his own interests and ego aside, seeing the humanity in a child ripped from her parents at the border, or a protestor calling for justice or a family wiped out by natural disaster, that would have been a good thing for America and the world. I wish Donald Trump knew how to be a president because America needs a president right now. Throughout this time of crisis Americans, keep going, checking on neighbors, showing up to jobs as first responders, hospitals, grocery stores, nursing homes. Yes, it still takes a village and we need leaders equal to this moment of sacrifice and service. We need Joe Biden and Kamala Harris.

Hillary Clinton: (01:10)
Everyone has a story about Joe’s caring and empathy. I remember him calling after my mother Dorothy died and we talked about being raised by strong women. The best testament to Joe is how he’s cared for his family. And how great is it that Dr. Jill Biden plans to keep teaching as First Lady? And Joe picked the right partner in Kamala. She’s relentless in the pursuit of justice and equity. And she’s kind. When her press secretary Tyrone Gail was dying of cancer, she dropped everything to be with him in his final moments. I know something about the slings and arrows she’ll face and believe me, this former district attorney and attorney general can handle them all. So this is the team to pull our nation back from the brink, but they can’t do it without us. For four years, people have told me, “I didn’t realize how dangerous he was. I wish I could do it all over.” Or worst, “I should have voted.”

Hillary Clinton: (02:15)
Look, this can’t be another woulda, coulda should have election. If you vote by mail, request your ballot now and send it back right away. If you vote in person, do it early. Become a poll worker. Most of all, no matter what, vote. As Michelle Obama and Bernie Sanders warned us, if Trump is reelected, things will get even worse. That’s why we need unity. Now more than ever remember, back in 2016, when Trump asked, “What do you have to lose? Well, now we know our healthcare, our jobs, our loved ones, our leadership in the world, and even our post office.

Hillary Clinton: (03:01)
But let’s set our sights higher than getting one man out of the White House. Joe Biden and Kamala Harris are going to give us so much to vote for let’s vote for the jobs that Joe’s plan will create. Clean energy jobs to fight climate change. Caregiving jobs with living wages. Vote for emergency relief that lifts small businesses and saves hardworking people from foreclosures and evictions. It’s wrong that billionaires got $400 billion richer during the pandemic while millions lost their $600 a week in extra unemployment.

Hillary Clinton: (03:41)
Vote for the parents and teachers struggling to balance children’s education and safety. And for healthcare workers fighting COVID-19 with little help from the White House. Vote for paid family leave and healthcare for everyone. For Social Security, Medicare and Planned Parenthood vote for DREAMers and their families. Vote for law enforcement purged of racial bias that keeps all our streets safe. Vote for justice for George Floyd, Breonna Taylor, and Ahmaud Arbery because Black Lives Matter. Vote for honest elections, so we, not a foreign adversary, choose our president. Vote for the diverse, hopeful America we saw in last night’s roll call. And don’t forget, Joe and Kamala can win by three million votes and still lose. Take it from me.

Hillary Clinton: (04:43)
So we need numbers overwhelming, so Trump can’t sneak or steal his way to victory. Text vote30330 to get started. A hundred years ago yesterday, the 19th Amendment to the constitution was ratified. It took seven decades of suffragists marching, picketing, and going to jail to push us closer to a more perfect union. 55 years ago, John Lewis marched and bled in Selma because that work was unfinished. Tonight, I’m thinking of the girls and boys who see themselves in America’s future because of Kamala Harris, a black woman, the daughter of Jamaican and Indian immigrants, and our nominee for Vice President. This is our country story, breaking down barriers and expanding the circle of possibility.

Hillary Clinton: (05:38)
And to the young people watching, don’t give up on America. Despite our flaws and problems we’ve come so far. We can still be a more just, equal country with opportunities previous generations could never have imagined. There’s a lot of heartbreak in America now, and the truth is many things were broken before the pandemic. But as the saying goes, the world breaks everyone and afterward many are strong at the broken places. That’s Joe Biden. He knows how to keep going, unify, and lead because he’s done that for his family and country. So come November, if we’re strong together, we’ll heal together. We’ll redeem the soul and the promise of our country led by President Joe Biden and Vice President Kamala Harris.