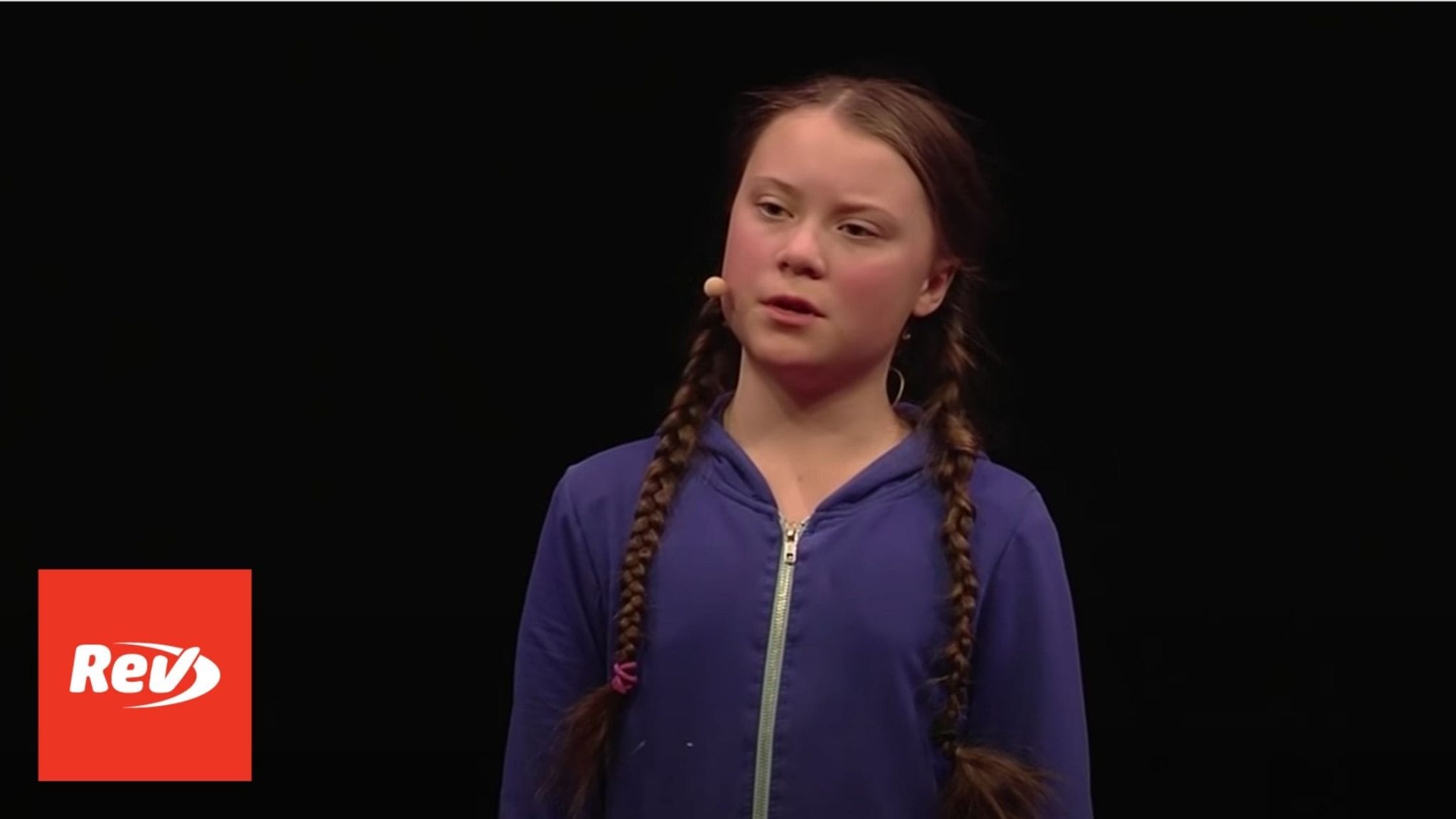 Climate activist Greta Thunberg gave a Ted Talk speech titled “School strike for climate – save the world by changing the rules” on December 12, 2018. Read the transcript of her speech here.

Greta Thunberg: (00:07)
When I was about eight years old, I first heard about something called climate change or global warming. Apparently that was something humans had created by our way of living. I was told to turn off the lights to save energy and to recycle paper to save resources. I remember thinking that it was very strange that humans who are an animal species among others could be capable of changing the earth’s climate. Because if we were and if it was really happening, we wouldn’t be talking about anything else. As soon as you turn on the TV, everything would be about that; headlines, radio, newspapers. You would never read or hear about anything else as if there was a world war going on. But no one ever talked about it. If burning fossil fuels was so bad that it threatened our very existence, how could we just continue like before? Why were the no restrictions? Why wasn’t it made illegal?

Greta Thunberg: (01:25)
To me that did not add up. It was too unreal. So when I was 11, I became ill. I fell into depression. I stopped talking and I stopped eating. In two months, I lost about 10 kilos of weight. Later on, I was diagnosed with Asperger syndrome, OCD and selective mutism. That basically means I only speak when I think it’s necessary. Now is one of those moments. For those of us who are on the spectrum, almost everything is black or white. We aren’t very good at lying and we usually don’t enjoy participating in the social game that the rest of you seem so fond of. I think in many ways that we autistic are the normal ones and the rest of the people are pretty strange, especially when it comes to the sustainability crisis where everyone keeps saying that climate change is an existential threat and the most important issue of all and yet they just carry on like before. I don’t understand that because if the emissions have to stop, then we must stop the emissions.

Greta Thunberg: (02:53)
To me that is black or white. There are no gray areas when it comes to survival. Either we go on as a civilization or we don’t. We have to change. Rich countries like Sweden need to start reducing emissions by at least 15% every year. And that is so that we can stay below a two degree warming target. Yet as the IPCC have recently demonstrated, aiming instead for 1.5 degrees Celsius would significantly reduced the climate impacts, but we can only imagine what that means for reducing emissions. You would think the media and every one of our leaders would be talking about nothing else, but they never even mention it. Nor does anyone ever mention the greenhouse gases already locked in the system, nor that air pollution is hiding a warming so that when we stop burning fossil fuels, we already have an extra level of warming, perhaps as high as 0.5 to 1.1 degrees Celsius. Furthermore does hardly anyone speak about the fact that we are in the midst of the sixth mass extinction with up to 200 species going extinct every single day.

Greta Thunberg: (04:16)
That the extinction rate is today between 1000 and 10,000 times higher than what is seen as normal. Nor does hardly anyone ever speak about the aspect of equity or climate justice clearly stated everywhere in the Paris Agreement, which is absolutely necessary to make it work on a global scale. That means that rich countries need to get down to zero emissions within six to 12 years with today’s emission speed. And that is so that people in poorer countries can have a chance to heighten their standard of living by building some of the infrastructure that we have already built, such as roads, schools, hospitals, clean drinking water, electricity, and so on. Because how can we expect countries like India or Nigeria to care about the climate crisis if we who already have everything don’t care even a second about it, or our actual commitments to the Paris Agreement.

Greta Thunberg: (05:26)
So why are we not reducing our emissions? Why are they in fact still increasing? Are we knowingly causing a mass extinction? Are we evil? No, of course not. People keep doing what they do because the vast majority doesn’t have a clue about the actual consequences of our everyday life and they don’t know what the rapid changes required. We will think we know and we will think everybody knows, but we don’t because how could we. If there really was a crisis, and if this crisis was caused by our emissions, you would at least see some signs, not just flooded cities, tens of thousands of dead people, the whole nations leveled to piles of torn down buildings. You would see some restrictions, but no, and no one talks about it.

Greta Thunberg: (06:34)
There are no emergency meetings, no headlines, no breaking news. No one is acting as if we were in a crisis. Even most climate scientists or green politicians keep on flying around the world, eating meat and dairy. If I live to be 100, I will be alive in the year 2103. When you think about the future today, you don’t think beyond the year 2050. By then I will, in the best case, not even have lived half of my life. What happens next? The year 2078 I will celebrate my 75th birthday. If I have children or grandchildren, maybe they will spend that day with me. Maybe they will ask me about you, the people who were around back in 2018. Maybe they will ask why you didn’t do anything while there was still time to act.

Greta Thunberg: (07:47)
What we do or don’t do right now will affect my entire life and the lives of my children and grandchildren. What we do or don’t do right now, me and my generation can’t undo in the future. So when school started in August of this year, I decided that this was enough. I sat myself down on the ground outside of the Swedish parliament. I school striked for the climate. Some people say that I should be in school instead. Some people say that I should study to become a climate scientist so that I can solve the climate crisis. But the climate crisis has already been solved. We already have all the facts and solutions, all we have to do is to wake up and change.

Greta Thunberg: (08:44)
And why should I be studying for a future that soon will be no more when no one is doing anything whatsoever to save that future? And what is the point of learning facts in the school system when the most important facts given by the finest science of that same school system clearly means nothing to our politicians and our society? Some people say that Sweden is just a small country and that it doesn’t matter what we do. But I think that if a few children can get headlines all over the world just by not going to school for a few weeks, imagine what we could all do together if we wanted to.

Greta Thunberg: (09:30)
Now we’re almost at the end of my talk and this is where people usually starts talking about hope, solar panels, wind power, circular economy, and so on. But I’m not going to do that. We’ve had 30 years of pep talking and selling positive ideas. And I’m sorry, but it doesn’t work because it you would have the emissions would have gone down by now, they haven’t. And yes, we do need hope. Of course, we do. But the one thing we need more than hope is action. Once we start to act, hope is everywhere. So instead of looking for hope, look for action. Then, and only then hope will come. Today we use 100 million barrels of oil every single day. There are no politics to change that. There are no rules to keep that oil in the ground. So we can’t save the world by playing by the rules because the rules have to be changed. Everything needs to change and it has to start today. Thank you.