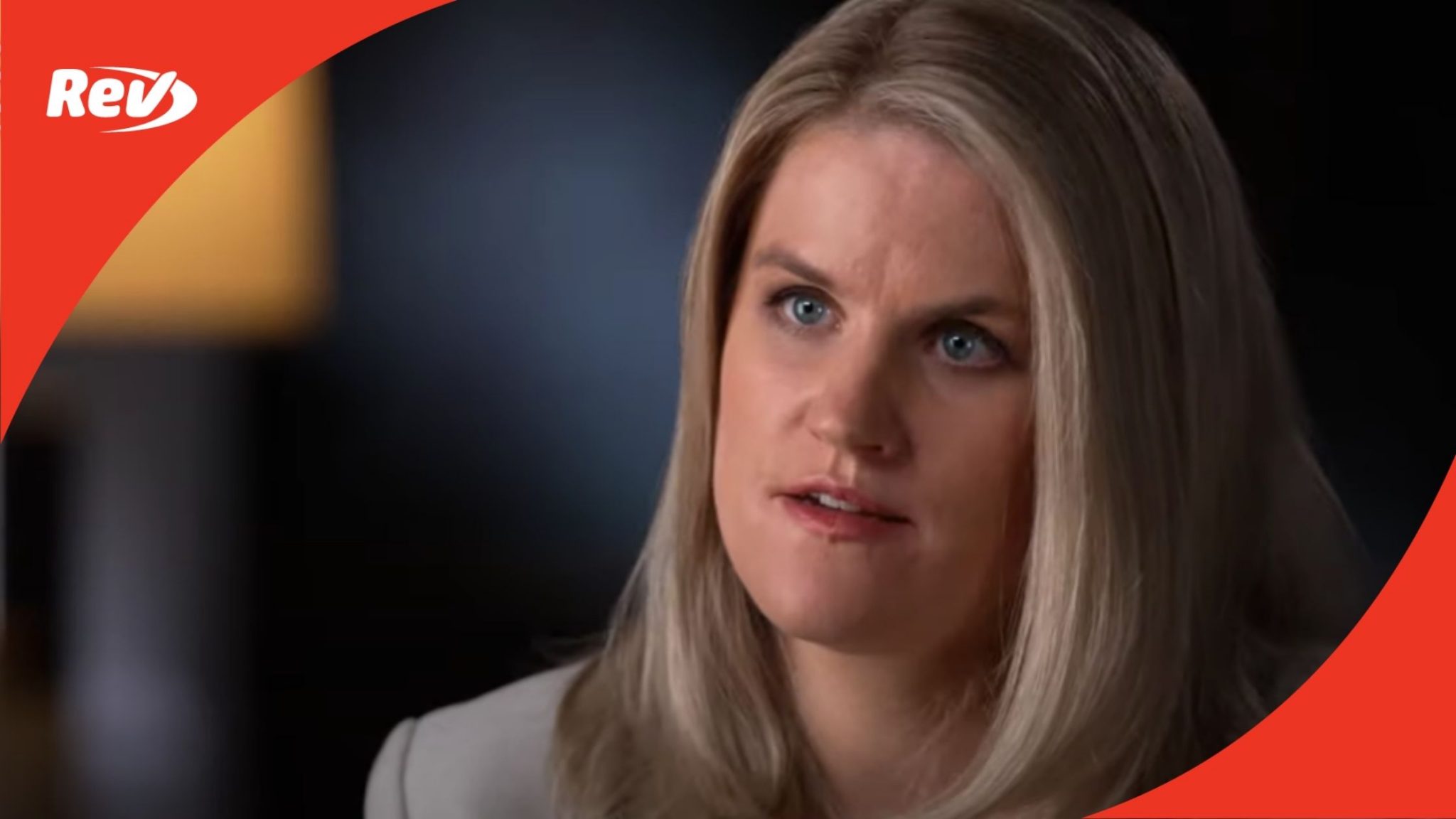 Facebook whistleblower Frances Haugen was interviewed on 60 Minutes on October 3, 2021. Read the transcript of the full interview remarks here.

Scott Pelley: (00:01)
Her name is Francis Haugen, that is a fact that Facebook has been anxious to know since last month when an anonymous former employee filed complaints with federal law enforcement. The complaints say Facebook’s own research shows that it amplifies hate, misinformation and political unrest, but the company hides what it knows. One complaint alleges that Facebook’s Instagram harms teenage girls.

Scott Pelley: (00:31)
What makes Haugen’s complaints unprecedented is the trove of private Facebook research she took when she quit in May. The documents appeared first last month in The Wall Street Journal, but tonight Francis Haugen is revealing her identity to explain why she became the Facebook whistleblower.

Scott Pelley: (01:13)
Francis Haugen is 37, a data scientist from Iowa with a degree in computer engineering and a Harvard master’s degree in business. For 15 years, she’s worked for companies including Google and Pinterest.

Frances Haugen: (01:29)
You’ve seen a bunch of social networks and it was substantially worse at Facebook than anything I’d seen before.

Scott Pelley: (01:35)
You know, someone else might’ve just quit and moved on. And I wonder why you take this stand?

Scott Pelley: (01:55)
When and how did it occur to you to take all of these documents out of the company?

Scott Pelley: (02:11)
She secretly copied tens of thousands of pages of Facebook internal research. She says evidence shows that the company is lying to the public about making significant progress against hate, violence and misinformation. One study she found from this year says, “We estimate that we may action as little as three to 5% of hate and about six tenths of 1% of violence and incitement on Facebook, despite being the best in the world at it.”

Scott Pelley: (02:45)
To quote from another one of the documents you brought out, “We have evidence from a variety of sources that hate speech, divisive political speech and misinformation on Facebook and the family of apps are affecting societies around the world.”

Frances Haugen: (03:03)
When we live in an information environment that is full of angry, hateful, polarizing content, it erodes our civic trust, it erodes our faith in each other, it erodes our ability to want to care for each other. The version of Facebook that exists today is tearing our societies apart and causing ethnic violence around the world.

Scott Pelley: (03:25)
Ethnic violence, including Myanmar in 2018, when the military used Facebook to launch a genocide.

Scott Pelley: (03:35)
Frances Haugen told us she was recruited by Facebook in 2019. She says she agreed to take the job only if she could work against misinformation because she had lost a friend to online conspiracy theories.

Frances Haugen: (03:50)
I never wanted anyone to feel the pain that I had felt and I had seen how high the stakes were in terms of making sure there was high quality information on Facebook.

Scott Pelley: (04:00)
At headquarters, she was assigned to Civic Integrity, which worked on risks to elections, including misinformation. But after this past election, there was a turning point.

Frances Haugen: (04:13)
They told us we’re dissolving Civic Integrity. They basically said, “Oh good, we made it through the election, there wasn’t riots, we can get rid of Civic Integrity now.” Fast forward a couple of months, we got the insurrection and when they got rid of Civic Integrity, it was the moment where I was like, “I don’t trust that they’re willing to actually invest what needs to be invested to keep Facebook from being dangerous.”

Scott Pelley: (04:38)
Facebook says the work of Civic Integrity was distributed to other units. Haugen told us the root of Facebook’s problem is in a change that it made in 2018 to its algorithms, the programming that decides what you see on your Facebook newsfeed.

Frances Haugen: (04:58)
So, you have your phone, you might see only a hundred pieces of content if you sit and scroll on it for five minutes, but Facebook has thousands of options they could show you.

Scott Pelley: (05:09)
The algorithm picks from those options based on the kind of content you’ve engaged with the most in the past.

Frances Haugen: (05:17)
And one of the consequences of how Facebook is picking out that content today is it is optimizing for content that gets engagement, a reaction, but its own research is showing that content that is hateful, that is divisive, that is polarizing, it’s easier to inspire people to anger than it is to other emotions.

Frances Haugen: (05:45)
Yes. Facebook has realized that if they change the algorithm to be safer, people will spend less time on the site, they’ll click on less ads, they’ll make less money.

Scott Pelley: (05:56)
Haugen says Facebook understood the danger to the 2020 election, so it turned on safety systems to reduce misinformation. But many of those changes, she says, were temporary.

Frances Haugen: (06:09)
And as soon as the election was over, they turned them back off or they changed the settings back to what they were before to prioritize growth over safety. And that really feels like a betrayal of democracy to me.

Scott Pelley: (06:20)
Facebook says some of the safety systems remained, but after the election, Facebook was used by some to organize the January 6th insurrection. Prosecutors cite Facebook posts as evidence, photos of armed partisans and text, including, “By bullet or ballot, restoration of the Republic is coming.” Extremists used many platforms, but Facebook is a recurring theme. After the attack, Facebook employees raged on an internal message board, copied by Haugen. “Haven’t we had enough time to figure out how to manage discourse without enabling violence?” We looked for positive comments and found this, “I don’t think our leadership team ignores data, ignores dissent, ignores truth.” But that drew this reply, “Welcome to Facebook. I see you just joined in November, 2020. We have been watching wishy washy actions of company leadership for years now. Colleagues cannot conscience working for a company that does not do more to mitigate the negative effects of its platform.”

Frances Haugen: (07:41)
It’s one of these unfortunate consequences, right? No one at Facebook is malevolent, but the incentives are misaligned, right? Facebook makes more money when you consume more content. People enjoy engaging with things that elicit an emotional reaction and the more anger that they get exposed to, the more they interact and the more they consume.

Scott Pelley: (08:02)
That dynamic led to a complaint to Facebook by major political parties across Europe. This 2019 internal report obtained by Haugen says that the parties, “Feel strongly that the change to the algorithm has forced them to skew negative in their communications on Facebook, leading them into more extreme policy positions.”

Scott Pelley: (08:26)
The European political parties were essentially saying to Facebook, the way you’ve written your algorithm is changing the way we lead our countries.

Frances Haugen: (08:36)
Yes. You are forcing us to take positions that we don’t like, that we know are bad for society. We know if we don’t take those positions, we won’t win in the marketplace of social media.

Scott Pelley: (08:54)
One of the Facebook internal studies that you’ve found talks about how Instagram harms teenage girls.

Frances Haugen: (09:16)
And what’s super tragic is Facebook’s own research says as these young women begin to consume this eating disorder content, they get more and more depressed and it actually makes them use the app more and so they end up in this feedback cycle where they hate their bodies more and more. Facebook’s own research says it is not just that Instagram is dangerous for teenagers, that it harms teenagers, it’s that it is distinctly worse than other forms of social media.

Scott Pelley: (10:41)
What is the legal theory behind going to the SEC? What laws are you alleging have been broken?

John Ty: (10:48)
As a publicly traded company, Facebook is required to not lie to its investors or even withhold material information. So, the SEC regularly brings enforcement actions alleging that companies, like Facebook and others, are making material misstatements and omissions that affect investors adversely.

John Ty: (11:16)
The Dodd-Frank Act, passed over 10 years ago at this point, created an Office of the Whistleblower inside the SEC. And one of the provisions of that law says that no company can prohibit its employees from communicating with the SEC and sharing internal corporate documents with the SEC.

Frances Haugen: (11:36)
I have a lot of empathy for Mark and Mark has never set out to make a hateful platform, but he has allowed choices to be made where the side effects of those choices are that hateful, polarizing content gets more distribution, more reach.

Scott Pelley: (11:52)
Facebook declined an interview, but in a written statement to 60 minutes, it said, “Every day our teams have to balance protecting the right of billions of people to express themselves openly with the need to keep our platform a safe and positive place. We continue to make significant improvements to tackle the spread of misinformation and harmful content. To suggest we encourage bad content and do nothing is just not true. If any research had identified an exact solution to these complex challenges, the tech industry, governments and society would have solved them a long time ago.”

Scott Pelley: (12:33)
Facebook is a $1 trillion company. Just 17 years old, it has 2.8 billion users, which is 60% of all internet connected people on earth. Frances Haugen plans to testify before Congress this week. She believes the federal government should impose regulations.

Frances Haugen: (12:57)
Facebook has demonstrated, they cannot act independently. Facebook, over and over again, has shown it chooses profit over safety. It is subsidizing, it is paying for its profits with our safety. I’m hoping that this will have had a big enough impact on the world that they get the fortitude and the motivation to actually go put those regulations into place. That’s my hope.