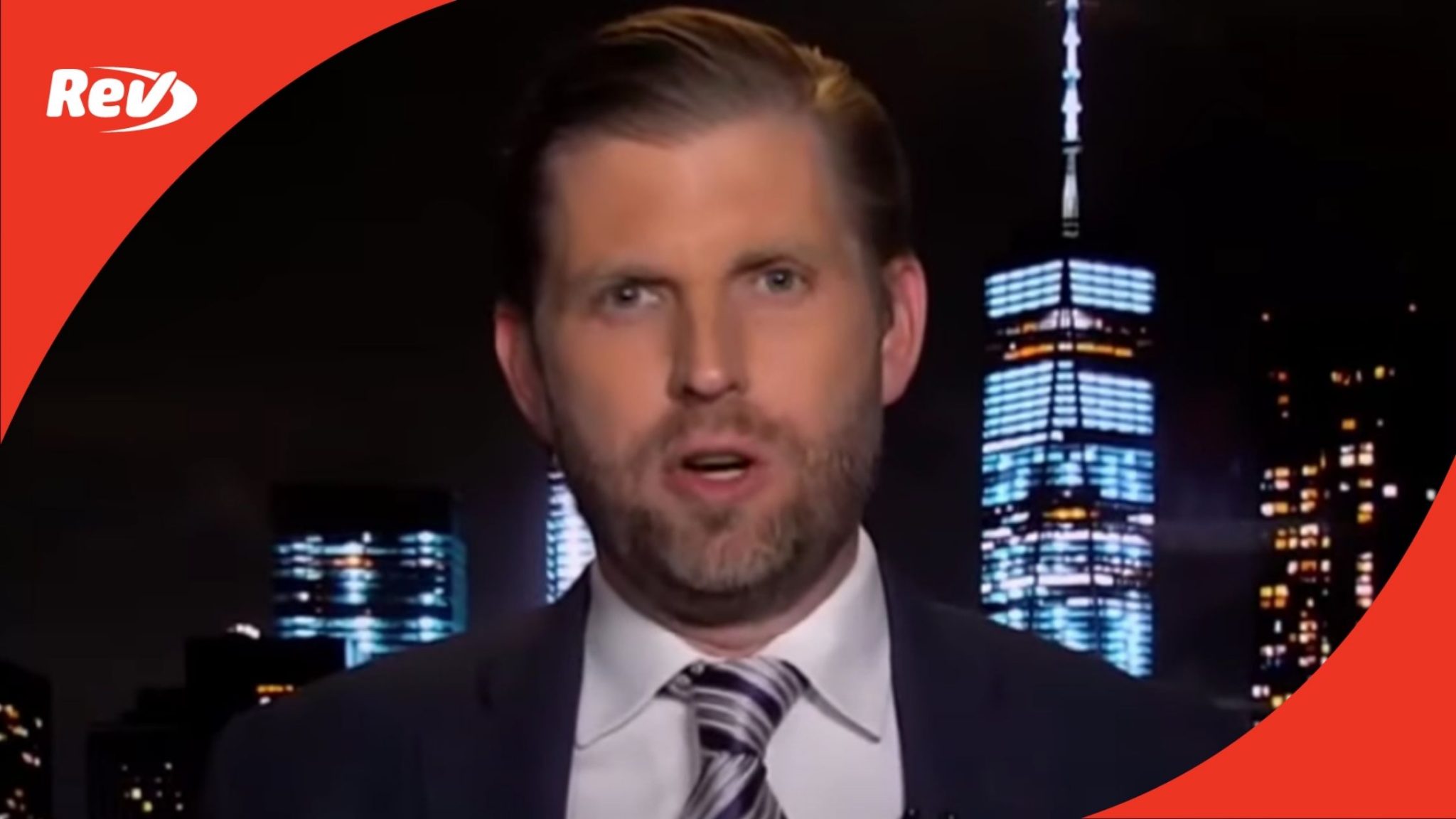 Eric Trump was interviewed on Sean Hannity’s Fox News show on October 18, 2021. Eric Trump criticized Joe Biden for being in Delaware, away from the White House. Read the transcript of the interview here.

Sean Hannity: (00:00)
… used cars, 24 new cars if you can find them, eight propane 27, appliances seven, and US wholesale prices are up a record whopping 8.6%. To make matters worse, the supply chain, which we were referring to is in chaos. Trump Organization’s Eric Trump is with us. You know, you really can’t screw it up any more than this. Okay. I can afford to fill my car and I can afford another $1,000 dollars to heat my home this winner. Who’s getting impacted? Poor Americans, middle-class Americans. The people that least can afford it, but the people that Democrats claim they have the most compassion for.

Eric Trump: (00:40)
Yeah, well, I think that’s right, Sean. I mean, you literally have Buttigeig out there saying this is a supply and demand problem. This is basic economics. And there is so much demand and we can’t keep up with supply and I’m sitting there saying, why didn’t you tell Cuba that? Why don’t you tell Venezuela that? Why don’t you tell Somalia that? The reason that their shelves have no product on them is because their economies are so wonderful, that they’re doing so great. And I think that really bothers Americans because they just know it’s fundamentally dishonest.

Eric Trump: (01:07)
And the other thing that really bothers me, Sean, about this situation is where is everybody during these crisis? Every crisis that Biden has. And every single day, there’s another one, whether it be Afghanistan or the border, right? The leaders leave. So Pete Buttigieg during this whole crisis is nowhere to be found. He’s on paternity leave, right?

Eric Trump: (01:24)
But then you have Kamala Harris when you have this massive border crisis and where does she go? She goes nowhere near the border. In fact, she goes to South America to not solve that problem. And she goes overseas to Asia to, again, not work on that problem. When Afghanistan is falling, guess what? You have President Biden, who is in Delaware, not solving that problem. Why is it that every person in the Biden cabinet flees and runs away every single time there’s a problem as opposed to actually putting their head down, getting to work, and solving the damn problem.

Sean Hannity: (01:53)
All right. So these are all preventable problems. And I think the good news for politics in the country is you can see the difference between America first, America last, and a strong president that might occasionally offend with a mean tweet and a guy that doesn’t know what day of the week it is. I think I’ll choose the guy that knows what day of the week it is. And occasionally puts out a mean tweet, but fights like hell for the country. I’ll take that guy.

Eric Trump: (02:22)
Yeah. I will take that guy too. Especially listen, I think the speaker said it perfectly. Look at oil prices. Look at gas prices right now. I mean, literally the Biden administration, Sean, is begging OPEC. Please, please release more gas. Now, if you actually go back in time, if you go back eight months ago, the first order of business for Biden, the day he came into office was you remember it, canceling the XL pipeline and preventing all drilling on all public lands and everything else. So he does that day one and now they go out to OPEC and they beg them please produce more oil. I mean, what do you think that does for the price of oil? It is absolute incompetence. If you were to do the exact opposite of every single thing that this guy does, you’d actually have good policy, but unfortunately they’re going down rabbit holes with every single political decision. They’re on the wrong side of every single political decision and Americans are paying because of it. And it’s really horribly sad, Sean.

Sean Hannity: (03:14)
Okay. All that preventable, $1.50 more gallons, we pay more for everything. We buy. More people dead from COVID this year than last year. All I heard during 2020 was attacks against your father. Your father left Joe Biden three vaccines and monoclonal antibodies that apparently Joe Biden didn’t hear about till three weeks ago.

Eric Trump: (03:34)
Yeah, that’s right. I mean, absolutely. Sean, I mean, my father was producing the vaccine. By the way, people were taking it in record numbers. And one of the things I think Biden has just done just terrible at by shoving things down American’s throats. He’s actually scared America about the vaccine, which hadn’t happened under my father. People were getting the vaccine in record numbers, but you see these mandates and you see them just jamming it on Americans. And you know, don’t push something on Americans, educate them, but don’t force things on Americans. Americans are not that society. They want to live a free life. It’s never worked, Sean. It’s just never worked.

Sean Hannity: (04:13)
And it’s not going to work, but it’s going to become a disaster. People will seem to have made up their mind for whatever reason. We’ve already debated vax, don’t vax, but they made up their minds and we were going to lose thousands of workers. Eric Trump, thanks for being with us as always. When we come back, under Biden’s leadership, America’s standing in the world is deteriorating quickly. Hear about the hypersonic weapon from China? Well, we’ll deal with that next.