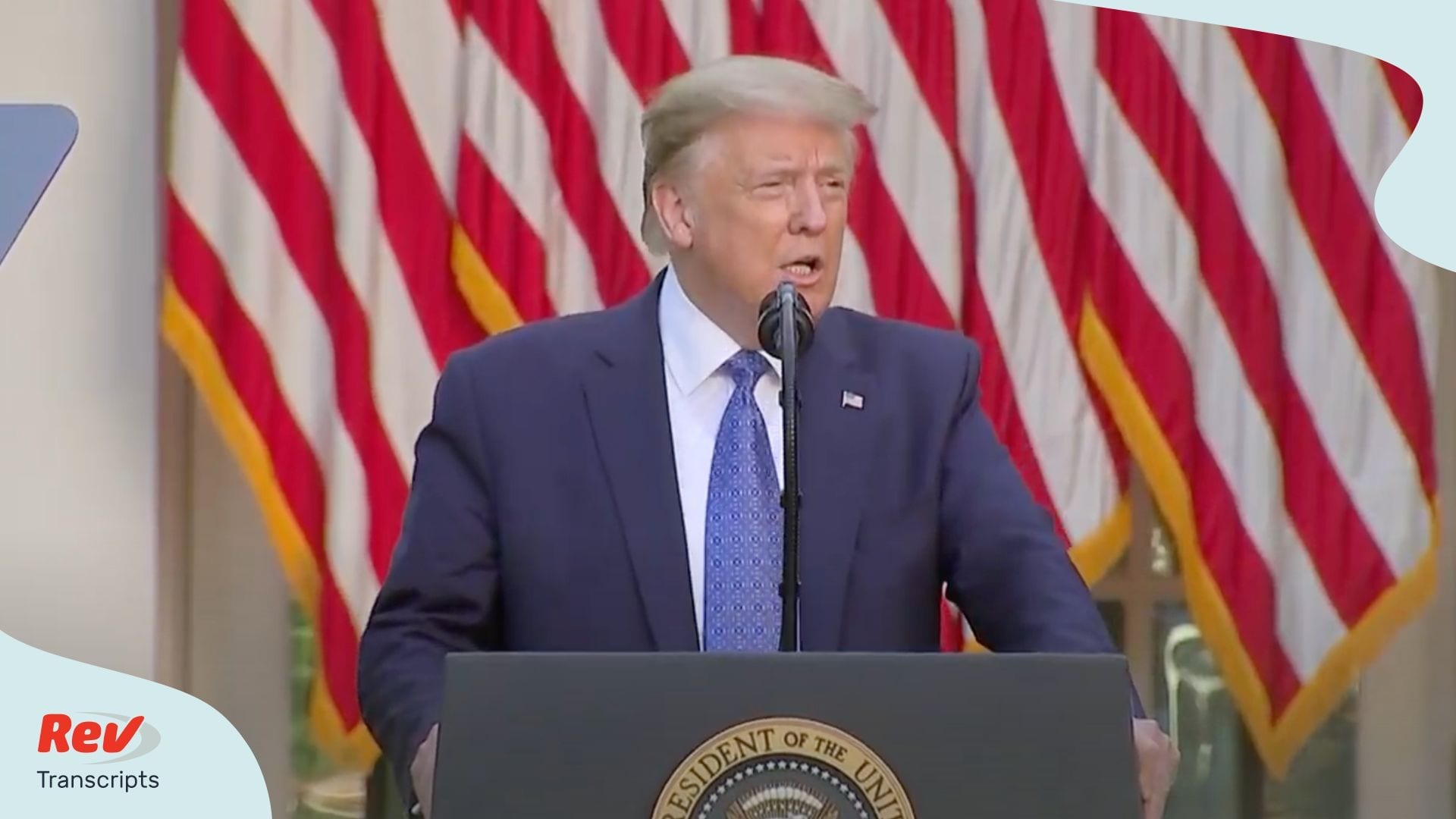 Donald Trump gave a June 1 speech in the Rose Garden amid George Floyd protests. He said he wants mayors and governors to establish “an overwhelming law enforcement presence until the violence has been quelled,” and if not he will, “deploy the United States military, and quickly solve the problem for them.” This is would be part of the Insurrection Act of 1807. Read the full transcript here:

Donald Trump: (00:00)
Thank you very much. My fellow Americans, my first and highest duty as president is to defend our great country and the American people. I swore an oath to uphold the laws of our nation and that is exactly what I will do. All Americans were rightly sickened and revolted by the brutal death of George Floyd. My administration is fully committed that for George and his family, justice will be served. He will not have died in vain, but we cannot allow the righteous cries and peaceful protestors to be drown out by an angry mob. The biggest victims of the rioting are peace loving citizens in our poorest communities and as their president, I will fight to keep them safe. I will fight to protect you. I am your president of law and order and an ally of all peaceful protesters. But in recent days, our nation has been gripped by professional anarchists, violent mobs, arsonists, looters, criminals, rioters, Antifa and others.

Donald Trump: (01:24)
A number of state and local governments have failed to take necessary action to safeguard their residents. Innocent people have been savagely beaten like the young man in Dallas, Texas, who was left dying on the street or the woman in upstate New York, viciously attacked by dangerous thugs. Small business owners have seen the dreams utterly destroyed. New York’s finest have been hit in the face with bricks, brave nurses who have battled the virus are afraid to leave their homes. A police precinct has been overrun here in the nation’s Capitol, the Lincoln Memorial and the World War II Memorial have been vandalized. One of our most historic churches was set a blaze. A federal officer in California, an African American enforcement hero was shot and killed. These are not acts of peaceful protest, these are acts of domestic terror. The destruction of innocent life and the spilling of innocent blood is an offense to humanity and a crime against God.

Donald Trump: (02:42)
America needs creation not destruction, cooperation not contempt, security not anarchy, healing not hatred, justice not chaos. This is our and we will succeed 100% we will succeed. Our country always wins. That is why I am taking immediate presidential action to stop the violence and restore security and safety in America. I am mobilizing all available, federal resources, civilian and military, to stop the rioting and looting to end the destruction and arson and to protect the rights of law abiding Americans, including your second amendment rights. Therefore, the following measures are going into effect immediately. First, we are ending the riots and lawlessness that has spread throughout our country. We will end it now. Today I have strongly recommended to every governor to deploy the national guard in sufficient numbers that we dominate the streets, mayors and governors must establish an overwhelming law enforcement presence until the violence has been quelled.

Donald Trump: (04:09)
If a city or state refuses to take the actions that are necessary to defend the life and property of their residents, then I will deploy the United States military and quickly solve the problem for them. I am also taking swift and decisive action to protect our great Capitol Washington DC. What happened in this city last night was a total disgrace. As we speak, I am dispatching thousands and thousands of heavily armed soldiers, military personnel, and law enforcement offices to stop the rioting, looting, vandalism assaults and the wanton destruction of property. We are putting everybody on warning our seven o’clock curfew will be strictly enforced. Those who threatened innocent life and property will be arrested, detained and prosecuted to the fullest extent of the law. I want the organizers of this terror to be on notice that you will face severe criminal penalties and lengthy sentences in jail.

Donald Trump: (05:25)
This includes Antifa and others who are leading instigators of this violence. One law and order and that is what it is. One law, we have one beautiful law and once that is restored and fully restored, we will help you, we will help your business and we will help your family. America is founded upon the rule of law. It is the of our prosperity, our freedom and our very way of life, but where there is no law, there is no opportunity, where there is no justice there is no Liberty, where there is no safety there is no future. We must never give in to anger or hatred if malice or violence rains, then none of us is free. I take these actions today with firm resolve and with a true and passionate love for our country by far our greatest days lie ahead. Thank you very much and now I’m going to pay my respects to a very, very special place. Thank you very much.