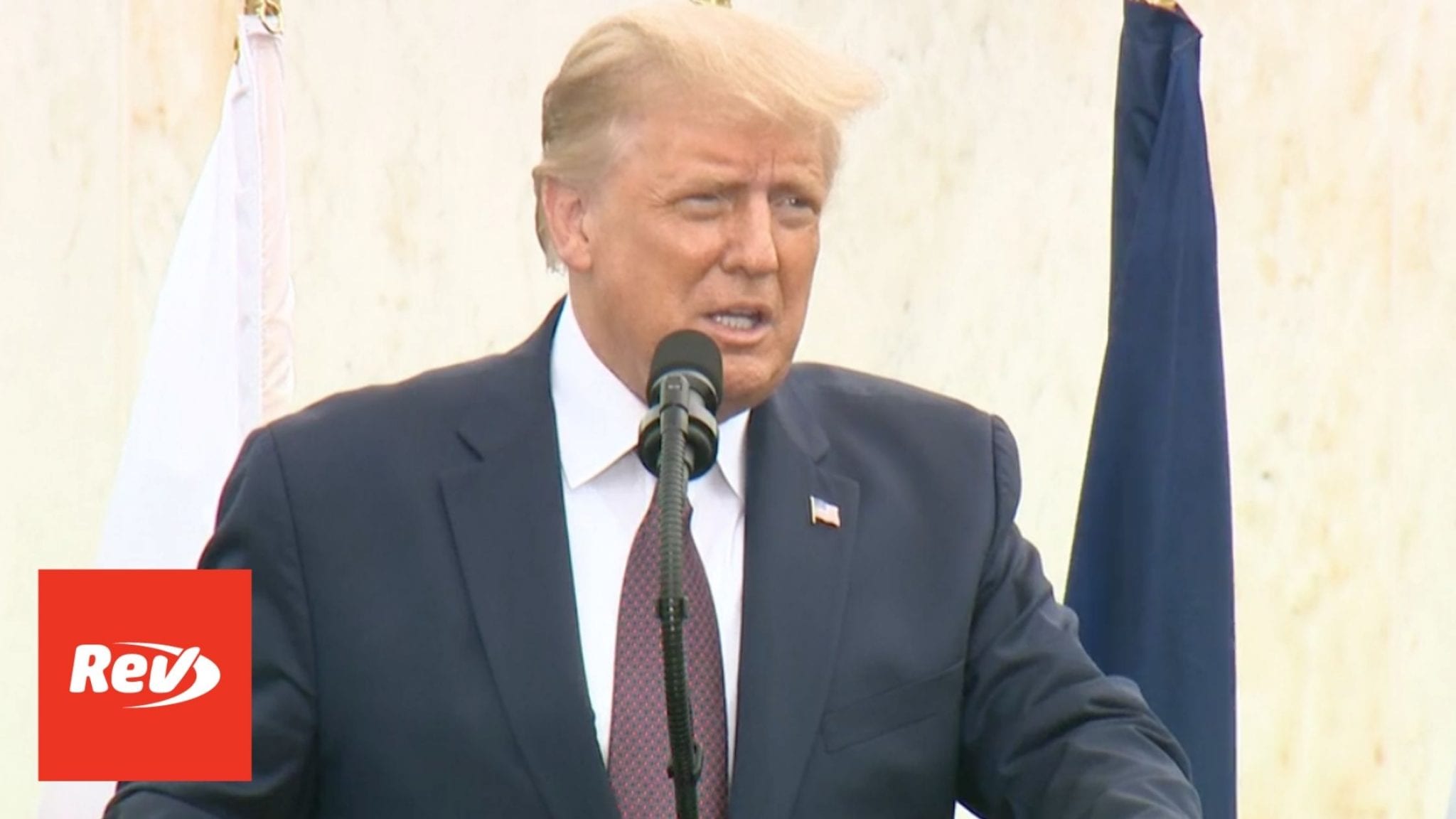 Donald Trump: (00:00)
Thank you. Thank you very much. Thank you, David, very much. It’s a great honor to be with you. 19 years ago on this day, at this very hour on this field, 40 brave men and women triumphed over terror and gave their lives in defense of our nation. Their names and their stories are forever inscribed on the eternal roll call of American heroes.

Donald Trump: (00:31)
Today, we pay tribute to their sacrifice and we mourn deeply for the nearly 3000 precious and beautiful souls who were taken from us on September 11th, 2001.

Donald Trump: (00:47)
To the family members of Flight 93, today, every heartbeat in America is wedded to yours. Your pain and anguish is the shared grief of our whole nation. The memory of your treasured loved ones will inspire America for all time to come. The heroes of Flight 93 are an everlasting reminder that no matter the danger, no matter the threat, no matter the odds, America will always rise up, stand tall, and fight back.

Donald Trump: (01:25)
To every 9/11 member all across this nation, the First Lady and I come to this hollowed ground deeply aware that we cannot fill the void in your heart or erase the terrible sorrow of this day. The agony renewed, the nightmare relived, the wounds reopened, the last treasured words played over and over again in your minds.

Donald Trump: (01:53)
But while we cannot erase your pain, we can help to shoulder your burden. We promise that unwavering love that you so want and need, support, devotion, and the very special devotion of all Americans.

Donald Trump: (02:15)
On that September morning when America was under attack, the battle turned in the skies above this field. Soon after taking off from Newark, New Jersey, radical Islamic terrorists seized control of United 93. Other hijacked planes struck the North tower of the World Trade Center, and then the South tower, and then the Pentagon. The terrorists on Flight 93 had a fourth target in mind, it was called our nation’s capitol.

Donald Trump: (02:58)
They were just 20 minutes away from reaching their sinister objective. The only thing that stood between the enemy and a deadly strike at the heart of American democracy was the courage and resolve of 40 men and women. The amazing passengers and crew of Flight 93.

Donald Trump: (03:23)
Donald and Jean Peterson were grandparents traveling to vacation in California. Deora Bodley was a student headed back to college. Richard Guadagno was returning from celebrating his grandmother’s 100th birthday. Lauren Caruzzi Grandcolas was three months pregnant with her first child.

Donald Trump: (03:52)
Every passenger and crew member on the plane had a life filled with love and joy, friends and family, radiant hopes and limitless dreams. When the plane was hijacked, they called their families and learned that America was also under attack. Then they faced the most fateful moment of their lives. Through the heartache and the tears, they prayed to God, they placed their last calls home, they whispered the immortal words, I love you. Today, those words ring out across these sacred grounds and they shine down on us from Heaven above.

Donald Trump: (04:41)
When terrorists raised to destroy the seat of our democracy, the 40 of Flight 93 did the most American of things. They took a vote, and then they acted. Together, they charged the cockpit. They confronted the pure evil. And, in their last act on this earth, they saved our capital. In this Pennsylvania field, the 40 intrepid souls of Flight 93 died as true heroes. Their momentous deeds will outlive us all.

Donald Trump: (05:22)
In the days and weeks after 9/11, citizens of all faiths, background, colors, and creeds, came together, prayed together, mourned together, and rebuilt together. The song, God Bless America became a rallying cry for the nation. We were united by our conviction that America was the world’s most exceptional country, blessed with the most incredible heroes, and that this was a land worth defending with our very last breath.

Donald Trump: (06:00)
It was a unity based on love for our families, care for our neighbors, loyalty to our fellow citizens, pride in our great flag, gratitude for our police and first responders, faith in God, and a refusal to bend our will to the depraved forces of violence, intimidation, oppression, and evil.

Donald Trump: (06:28)
In New York, Arlington, and Shanksville people raced into the suffocating smoke and rubble. At ground zero, the world witnessed the miracle of American courage and sacrifice. As ash rained down, police officers, first responders, and firefighters ran into the fires of hell. On that day, more than 400 first responders gave their lives, including 23 New York City police officers, 37 port authority workers, and 343 New York City firefighters. Today, we honor their extraordinary sacrifice and every first responder who keeps America safe.

Donald Trump: (07:23)
With us today is David D’Amato, a retired Chicago police officer and a current officer of the Navy reserves. On 9/11, he drove from Chicago to ground zero. As David says, “While the sights and smells of working at ground zero will forever be etched in my mind, what is more profound is the way this country came together afterwards. The police officers and firemen were revered as the heroes they truly are. The military was appreciated in a manner not seen in decades. Common people found new meaning in values like friendship, kindness, and selflessness.”

Donald Trump: (08:11)
Thank you, David, for such beautiful words. Thank you to every member of law enforcement who risks their lives to ensure our safety and uphold our peace.

Donald Trump: (08:23)
This morning, we also remember the 183 people who were killed in the attack on the Pentagon and the remarkable service members who crawled straight through the raging blaze to rescue their comrades. We express our undying loyalty to the nearly 6 million young men and women who have enlisted in the United States Armed Forces since September 11th, 2001. More than 7,000 military heroes have laid down their lives since 9/11 to preserve our freedom. No words can express the summit of their glory or the infinite depth of our gratitude, but we will strive every single day to repay our immeasurable debt and prove worthy of their supreme sacrifice.

Donald Trump: (09:17)
America will never relent in pursuing terrorists that threaten our people. Less than one year ago, American warriors took out the savage killer and leader of ISIS, al-Baghdadi. Soon after, our warriors ended the brutal reign of the Iranian butcher who murdered thousands of American service members. The world’s top terrorist, Qasem Soleimani, is dead.

Donald Trump: (09:48)
Here in Shanksville, this community locked arms and hearts in the wake of tragedy. With us today is Chuck Wagner, a heavy equipment operator who lives just a few miles away. Very soon after the attack, Chuck helped search for the black box. He was so changed by what he experienced, that he joined with several members of his church to become what they call ambassadors for the 40 men and women on Flight 93. Chuck and his neighbors learned about each person, cared for their families, and each day, rain or shine, they took shifts standing vigil over their final resting place. Long before this place was a National Memorial, back when it was marked by a simple wooden cross, Chuck and his fellow ambassadors were always here waiting to tell visitors about those we lost.

Donald Trump: (11:53)
Also, with us is Marine veteran Jason Thomas, from long Island. On September 11th, Jason had just retired from the Marines, but he immediately put back on his uniform and raced into the nightmare of ash and debris. At ground zero he found a fellow Marine, Dave Carnes. Together, they began to call out, “United States Marines. United States Marines. If you can hear us yell, tap, do whatever you can do. We’re the United States Marines.”

Donald Trump: (12:29)
Soon, they heard a shout for help. Two police officers were trapped beneath 20 feet of rubble. Jason and Dave dug for hours on end, knowing that at any moment the wreckage could come down on them, crushing them alive. At one point, someone told Jason to stop, Jason replied, “I’m a Marine. I don’t go back. I go forward.”

Donald Trump: (12:53)
That day, Jason helped save the lives of those two officers. For years Jason said nothing about what he did on 9/11. He did not even tell his five children, but when he saw the rescue recounted on TV, he decided to meet those officers. One of them gave him a gift, a steel cross made from a beam that Jason helped lift to free them from the hell on earth.

Donald Trump: (14:06)
The men and women of Flight 93 were mothers and fathers, sons and daughters, husbands and wives. Nothing could have prepared them for the dreadful events of that morning, but when the moment came, when history called, they did not hesitate, they did not waver. 40 towering patriots rose up, took charge, made their stand, turned the tide, and changed the course of history forever.

Donald Trump: (14:34)
Our sacred task, our righteous duty, and our solemn pledge is to carry forward the noble legacy of the brave souls who gave their lives for us 19 years ago. In their memory, we resolve to stand united one American nation to defend our freedoms, to uphold our values, to love our neighbors, to cherish our country, to care for our communities, to honor our heroes, and to never ever forget. Thank you. God bless you. God bless the heroes of Flight 93. God bless all of the families. 9/11, we’ll never forget. God bless you all. God bless America. Thank you very much. Thank you very much.

Speaker 2: (15:47)
Mr. President, thank you so very much for those moving and inspirational words. As we conclude here this day together, we do indeed remember and honor the 40 passengers and crew members of Flight 93 in this special and unique ceremony. As we go our separate ways, may we carry the memory of how they came together on that day to make our nation and world a better place for all.

Speaker 2: (16:26)
At this time, I would like to ask all attendees to remain in their seats as we prepare for the ceremonial wreath laying. I would ask that the Flight 93 ambassadors and dignitaries remain seated immediately following the wreath laying ceremony, to allow time and space for the families of Flight 93 to walk to the wall of names and through the ceremonial gate, to the sacred ground.

Speaker 2: (16:58)
Once again, thank you all for joining us today to honor the memory of the passengers and crew of Flight 93. Thank you.