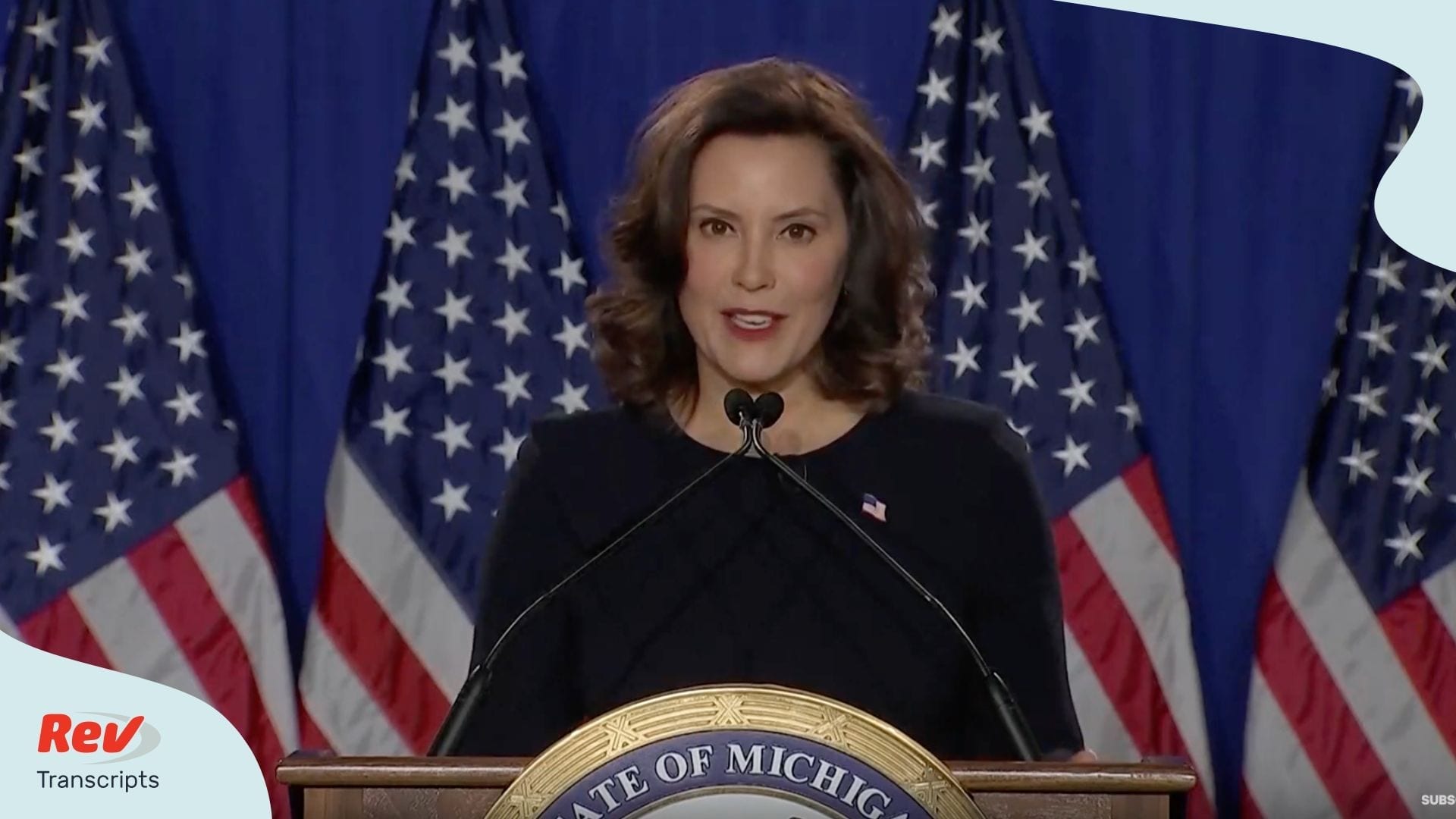 Gretchen Whitmer: (00:00)
Good evening. I’m honored to be here and grateful that you’re tuning in. I’m Gretchen Whitmer, the 49th governor of the great state of Michigan. Tonight, I’m at my daughter Sherry and Sydney’s public school, East Lansing High School. We’re here today with families and parents, teachers, and most importantly students. I want to thank you all for coming, but tonight I’m going to talk to those of you who are watching at home. I’d need a lot more than 10 minutes to respond to what the President just said. So instead of talking about what he is saying, I’m going to highlight what Democrats are doing. After all, you can listen to what someone says, but to know the truth, watch what they do. Michiganders are no different from Americans everywhere. We love our families and want a good life today and a better life tomorrow for our kids. We work hard and we expect our government to work hard for us as well.

Gretchen Whitmer: (01:01)
We have grit and value loyalty, and we still root for the Detroit Lions. We and all Americans might be weary of today’s politics, but we must stay engaged. Our country, our democracy, our future demand it. We’re capable of great things when we work together. We cannot forget that despite the dishonesty and division of the last few years and that we heard tonight from the President of the United States, together we have boundless potential. And young Americans are proving that every day, by taking action. That’s what I want to focus on tonight. Monte Scott is 13 years old and lives in Muskegon Heights, Michigan. Monte’s street was covered in potholes. They were ankle deep and he got tired of waiting for them to get fixed, so he grabbed a shovel and a bucket of dirt and filled them in himself. During my campaign, people told me to fix the damn roads because blown tires and broken windshields are down right dangerous.

Gretchen Whitmer: (02:10)
And car repairs take money from rent, childcare or groceries. And we, the Democrats are doing something about it. In Illinois, Governor J.B. Pritzker passed a multibillion dollar plan to rebuild their roads and bridges. Governor Phil Murphy is replacing lead pipes in New Jersey. All across the country, Democratic leaders are rebuilding bridges, fixing roads, expanding broadband and cleaning up drinking water. Everyone in this country benefits when we invest in infrastructure. Congressional Democrats have presented proposals to keep us moving forward, but President Trump and the Republicans in the Senate are blocking the path. When it comes to infrastructure, Monte has tried to do more with a and a pile of dirt than the Republicans in D.C. have with the Oval Office and the U.S. Senate. Bullying people on Twitter doesn’t fix bridges, it burns them. Our energy should be used to solve problems. And it’s true for healthcare too. For me, for so many Americans, healthcare is personal, not political.

Gretchen Whitmer: (03:23)
When I was 30, I became a member of the sandwich generation. That means I was sandwiched between two generations of my own family for whom I was the primary caregiver. I was holding down a new job, caring for my newborn daughter as well as my mom at the end of her brain cancer battle. I was up all night with the baby and during the day I had to fight my mom’s insurance company when they wrongly denied her coverage for chemotherapy. It was hard. It exposed the harsh realities of our workplaces, our healthcare system, and our childcare system, and it changed me. I lost patience for people who are just talk and no action. So as a state senator, I worked with a Republican governor and legislature to expand healthcare coverage to more than 680,000 Michiganders under the Affordable Care Act. Today, Democrats from Maine to Montana are expanding coverage and lowering costs.

Gretchen Whitmer: (04:22)
In Kansas, Governor Laura Kelly’s working across the aisle to bring Medicaid coverage to tens of thousands. In New Mexico, Governor Michelle Lujan Grisham enshrined ACA protections into law. Every Democrat running for president has a plan to expand healthcare for all Americans. Every one of them has supported the Affordable Care Act with coverage for people with preexisting conditions. They may have different plans, but the goal is the same. President Trump, sadly, has a different plan. He’s asking the courts to rip those lifesaving protections away. It’s pretty simple, Democrats are trying to make your healthcare better, Republicans in Washington are trying to take it away. Think about kids like 17 year old Blake Carroll from Idaho, who organized a fundraiser to pay for his mom’s colon cancer treatment. Or 19 year old Ebony Myers from Utah, who sells art to help pay for her own rare genetic disorder treatment. No one should have to crowdsource their healthcare, not in America. But the reality is not everyone in America has a job with healthcare and benefits.

Gretchen Whitmer: (05:34)
In fact, many have jobs that don’t even pay enough to cover their monthly expenses. Doesn’t matter what the President says about the stock market. What matters is that millions of people struggle to get by or don’t have enough money at the end of the month after paying for transportation, student loans or prescription drugs. American workers are hurting. In my own state, our neighbors in Wisconsin and Ohio, Pennsylvania and all over the country, wages have stagnated while CEO pay has skyrocketed. So when the President says the economy is strong, my question is, strong for whom? Strong for the wealthy, who are reaping rewards from tax cuts they don’t need. The American economy needs to be a different kind of strong. Strong for the science teacher spending her own money to buy supplies for her classroom. Strong for the single mom picking up extra hours, so she can afford her daughter’s soccer cleats. Strong for the small business owner who has to make payroll at the end of the month.

Gretchen Whitmer: (06:39)
Michigan invented the middle class, so we know if the economy doesn’t work for working people, it just doesn’t work. Who fights for hardworking Americans? Democrats do. In the U.S. House Speaker Nancy Pelosi and Democrats pass a landmark bill on equal pay. Another bill to give 30 million Americans are raise by increasing the minimum wage. And groundbreaking legislation to finally give Medicare the power to negotiate lower drug prices for America’s seniors and families. Those three bills and more than 275 other bipartisan bills are just gathering dust on Senate Majority Leader Mitch McConnell’s desk. Senator McConnell, America needs you to move those bills. Meanwhile, Democrats across the country are getting things done. Pennsylvania’s Governor Tom Wolf is expanding the right to overtime pay. Michigan is too. Because if you’re on the clock, you deserve to get paid. Nevada Governor Steve Sisolak, North Carolina Governor Roy Cooper are working to give hardworking teachers a raise. And speaking of the classroom, Wisconsin Governor Tony Evers unilaterally increased school funding by $65 million last year.

Gretchen Whitmer: (07:59)
In Colorado, Governor Jared Polis has enacted free all day kindergarten. And in 29 states, we’ve helped pass minimum wage hikes into law, which will lift people out of poverty and improve lives for families. That’s strength. That’s action. Democracy takes action and that’s why I’m so inspired by young people. They respond to mass shootings, demanding policies that make schools safer. They react to a world that’s literally on fire with fire in their bellies to push leaders to finally take action on climate change. They take on a road filled with potholes with a shovel and some dirt. It’s what gives me great confidence in our future and it’s why sometimes it feels like they’re the adults in the room. But it shouldn’t have to be that way. It’s not their mess to clean up, it’s ours. The choices we make today create their reality tomorrow. Young people, I’m talking to you and your parents and grandparents.

Gretchen Whitmer: (09:07)
Democrats want safe schools. We want everyone to have a path to a good life, whether it’s through a union apprenticeship, a community college, a four year university without drowning in debt. We want your water to be clean. We want you to love who you love and to live authentically as your true selves. And we want women to have autonomy over our bodies. We want our country welcoming and everyone’s vote counted. 2020 is a big year. It’s the year my daughter, Sherry will graduate from high school. It’s also the year she’ll cast her first ballot along with millions of young Americans. The two things are connected because walking across a graduation stage is as important as walking into the voting booth for the first time. Her future, all our kids’ futures will be determined not just by their dreams, but by our actions.

Gretchen Whitmer: (10:04)
As we witness the impeachment process in Washington, there are some things each of us, no matter our party should demand. The truth matters, facts matter, and no one should be above the law. It’s not what those senators say tomorrow, it’s about what they do that matters. Remember, listen to what people say but watch what they do. It’s time for action. Generations of Americans are counting on us. Let’s not let them down. Thank you for listening. God bless America. Good night.