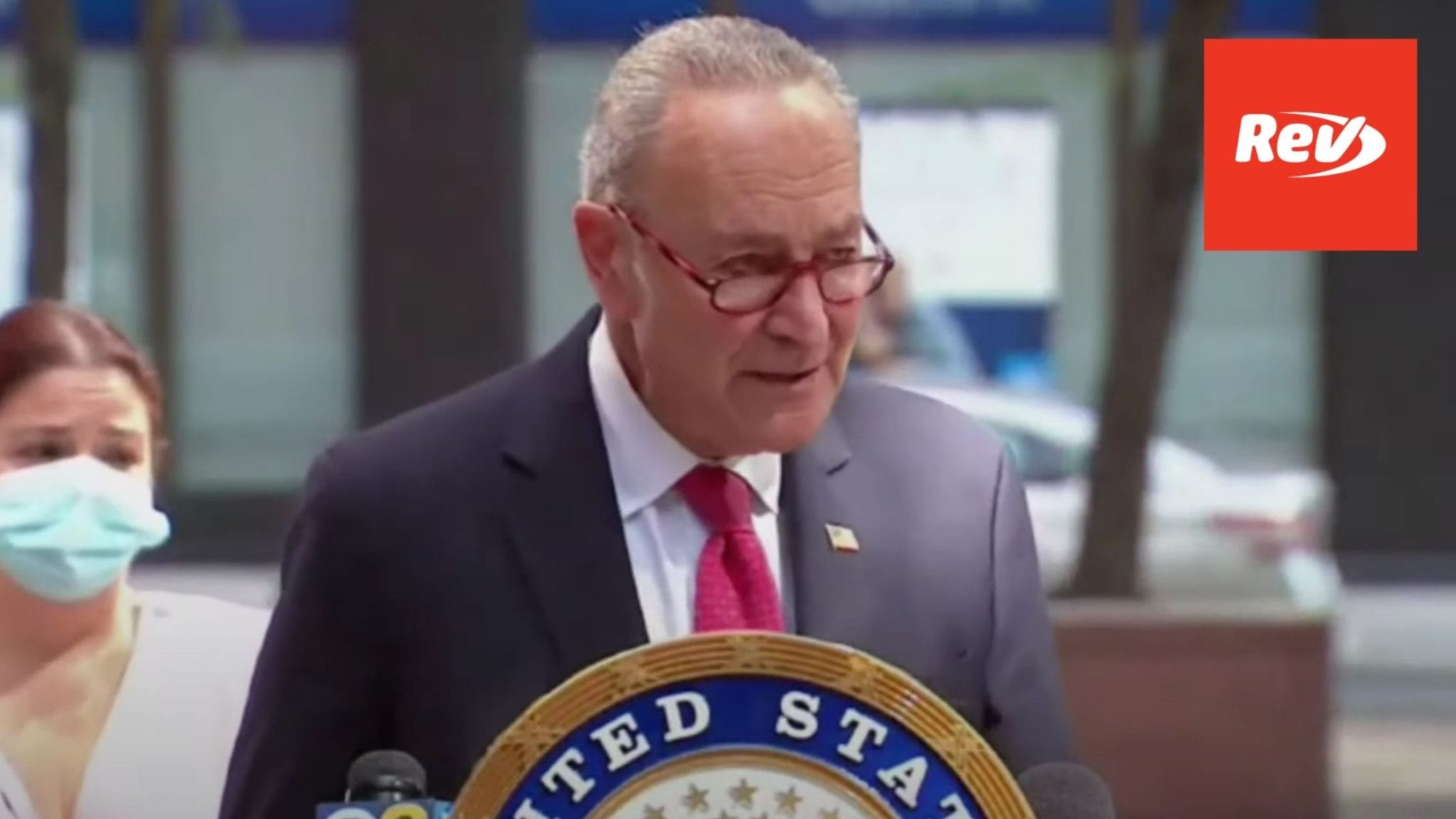 Senator Chuck Schumer held a press conference on September 27 to discuss concerns about Trump’s SCOTUS nominee Amy Coney Barrett. He focused on Barrett’s stance on the Affordable Care Act, saying “if she gets on the court, it’s a virtual certainty that over 150 million Americans health care will be hurt dramatically.” Read the transcript of Schumer’s remarks here.

Chuck Schumer: (00:14)
Good morning, everybody. Thank you for being here. And I have joining me some speakers who are very worried about the fate of healthcare in America, as it affects their families and all Americans. They are Renee Saltzman and her daughter, Emily, and Jeremy right here. And Josh Feiman, Penny’s dad. Penny couldn’t be with us today, but Josh is, and he’ll tell their story. We’ll hear their stories in a minute. But let me say a few things. Once again, the loss of Ruth Bader Ginsburg touches all of us. She was an amazing lady. She fought against all odds, brought equality for women, got on the court and brought equality for everybody. She will be missed. And as I mentioned to put someone on the court whose views are the exact opposite of Ruth Bader Ginsburg, at a time when she asked as her dying wish that we wait until the next election to choose somebody is just appalling, that Donald Trump would go ahead and do that. And that Mitch McConnell would follow him to do it. But he’s done that.

Chuck Schumer: (01:28)
And now we want to talk about the nomination of Amy Coney Barrett. This is probably news for hundreds of millions of Americans and their healthcare. Amy Coney Barrett has said that ACA is wrongly decided. She will be the swing vote on that court. And if she gets on the court, it’s a virtual certainty that over 150 million Americans health care will be hurt dramatically. A vote for Amy Coney Barrett is a vote to decimate the health care that so many Americans need. There are 130 million Americans who have preexisting conditions. We’ll hear from two families whose kids have them, but you could be a senior. You could be somebody with diabetes who’s 55 years old. You could be somebody with asthma who’s 28 years old. In Amy Coney Barrett’s world, if she gets on the court, it will be virtually impossible for you to get insurance.

Chuck Schumer: (02:35)
And once the protections for preexisting conditions are eliminated, if you have a child who has a serious illness, no insurance company will take you and you’ll have to watch your child suffer the outrage. There’re also over 30 million seniors who get reduced costs for very expensive prescription drugs, lost if Obamacare is repealed, which is what Amy Coney Barrett wants to do. And there are close to 10 million Americans whose only healthcare is through the ACA. They will lose their healthcare as well. Donald Trump as recently as this morning said, one of the reasons he’s putting Coney Barrett on the court is to get rid of America’s healthcare, to get rid of the ACA. That should not stand. And we are asking New Yorkers and Americans to call senators all over the country and say, “Do not let this happen.”

Chuck Schumer: (04:07)
Kids like Emily are in the cross hairs unfortunately with this appointment. Americans don’t want this appointment. The vast majority of Americans say, wait for the next president and then make the appointment. The overwhelming majority of Americans want to keep their health care and not have it dramatically slashed. And that’s why Coney Barrett does not belong on the court. We are here today to say that there are so many reasons she should not be added to the court. At the top of the list is healthcare. But we also know there are so many other issues where she’s against the American people.

Chuck Schumer: (04:58)
She’s claimed if justices read the law the way she does, they would quote, have to invalidate the entire healthcare law. That word sends shivers down the spine of these families and millions of others. Her record also makes clear that she will work hard to eliminate Roe v. Wade and a woman’s right to choose, that she will at the very least so cut it back to that we won’t even know it existed. Her views are so far out of the mainstream on health care above all, but on so many other issues as well.

Chuck Schumer: (05:45)
This is a reprehensible power grab. It’s a cynical attack on the legitimacy of the court engineered by Mitch McConnell and Donald Trump. And we are going to do everything, everything, everything we can to fight it. But the best way people, when they say, what can they do to help, call senators across the country, especially Republican senators and let them know you want to keep your healthcare. If you’re a woman, you want to keep your freedom and reproductive freedom. If you care about the globe, that you want to keep us fighting global warming. If you care about working people, you want to keep labor rights. Call, call, call. We can stop this nomination if the American people rise up and say no, and put heat on Republican senators who are now bowing to Donald Trump’s awful wishes to get rid of your healthcare and so much else.

Chuck Schumer: (06:47)
I am now going to call on Renee Saltzman and Jeremy Saltzman and Emily who will talk a little bit about their situation, right? Are you going to do that, Emily? Okay, great. This shows this is a bipartisan issue. Emily is wearing an elephant on her shirt.

Jeremy Saltzman: (08:21)
It’s never been more important. Get out and vote.

Chuck Schumer: (08:27)
And let me just say, every American, every American, whether they’re two years old or 90 years old is one diagnosis away from a preexisting condition. And under the Trump world with Coney Barrett on the court, you will never be able to get insurance and your health will suffer dramatically. We now have Mr. Feiman who will talk about his daughter. Mr. Feiman will talk about his daughter, Penny. T.

Mr. Feiman: (08:59)
Thank you, Senator. Yes. I just want to talk. So my daughter also, she couldn’t be here today, she actually lives in a assisted care facility and under COVID hasn’t been able to get out. Thank God for that facility and the care they’re giving her. And that wouldn’t be possible without so many of the protections that we get under a number of our laws, both Medicaid, which she has, and also private health insurance. And I know that the Saltzmans spoke very eloquently about pre-existing conditions and how quickly that can put you in trouble with insurance if that protection isn’t there. Another one that’s come up with Penny is lifetime caps, which is in danger. And as the Senator said, everybody is one diagnosis away from having a preexisting condition for the rest of your life. Anybody is one diagnosis or one accident, one illness away from hitting a lifetime cap. You can run through, believe me, I’ve seen it. You can run through hundreds of thousands of dollars in medical bills in a single year, sometimes less than that.

Mr. Feiman: (10:02)
And to think that if that protection is taken away and her private insurance, and she still needs private insurance for a lot of her care, if that’s taken away, she would have hit even the most generous caps within a year or two. I know for the Saltzmans as well for me, this is an issue that really does transcend politics. This is something that we really need to look out for our fellow Americans and even for ourselves. I mean, this can really happen to anybody. And so I’m here to speak for Penny. She can’t do it for herself. And also to tell everybody that these are your rights as well that we need to all protect.

Chuck Schumer: (10:39)
And lifetime caps are also protected in the ACA, which Judge Coney Barrett wants to eliminate. And let me just say, we’re one vote away. The vote was five, four in the court with Ruth Bader Ginsburg upholding ACA. If she’s replaced by Judge Coney Barrett, that will be flipped and all these things will go away. Again, a vote for Coney Barrett, let me just finish what I’m saying. A vote for Coney Barrett is a vote to strip away healthcare from over a hundred million Americans. It will happen if she’s on the bench. So once again, New Yorkers, Americans, raise your voices. Yes, sir.

Chuck Schumer: (11:47)
No, because I believe first that the whole process has been illegitimate. And second, because she’s already stated that she is for overturning the ACA. I will not meet with her.

Chuck Schumer: (12:08)
Look. We will use every tool in the toolkit to slow things down. But Mitch McConnell has so commandeered the Senate, has so defiled the Senate, there are fewer tools and they are less sharp, but what is there we will use. Other questions? Thank you everybody.

Chuck Schumer: (12:33)
Should play no role, no role. It’s the issues. The fact that she will repeal ACA, she will hurt a woman’s right to choose. And repealing ACA, no matter what an executive president does will not restore it. Period. You need the law to do it. Can’t hear you. Yes. Okay. Thank you everybody.