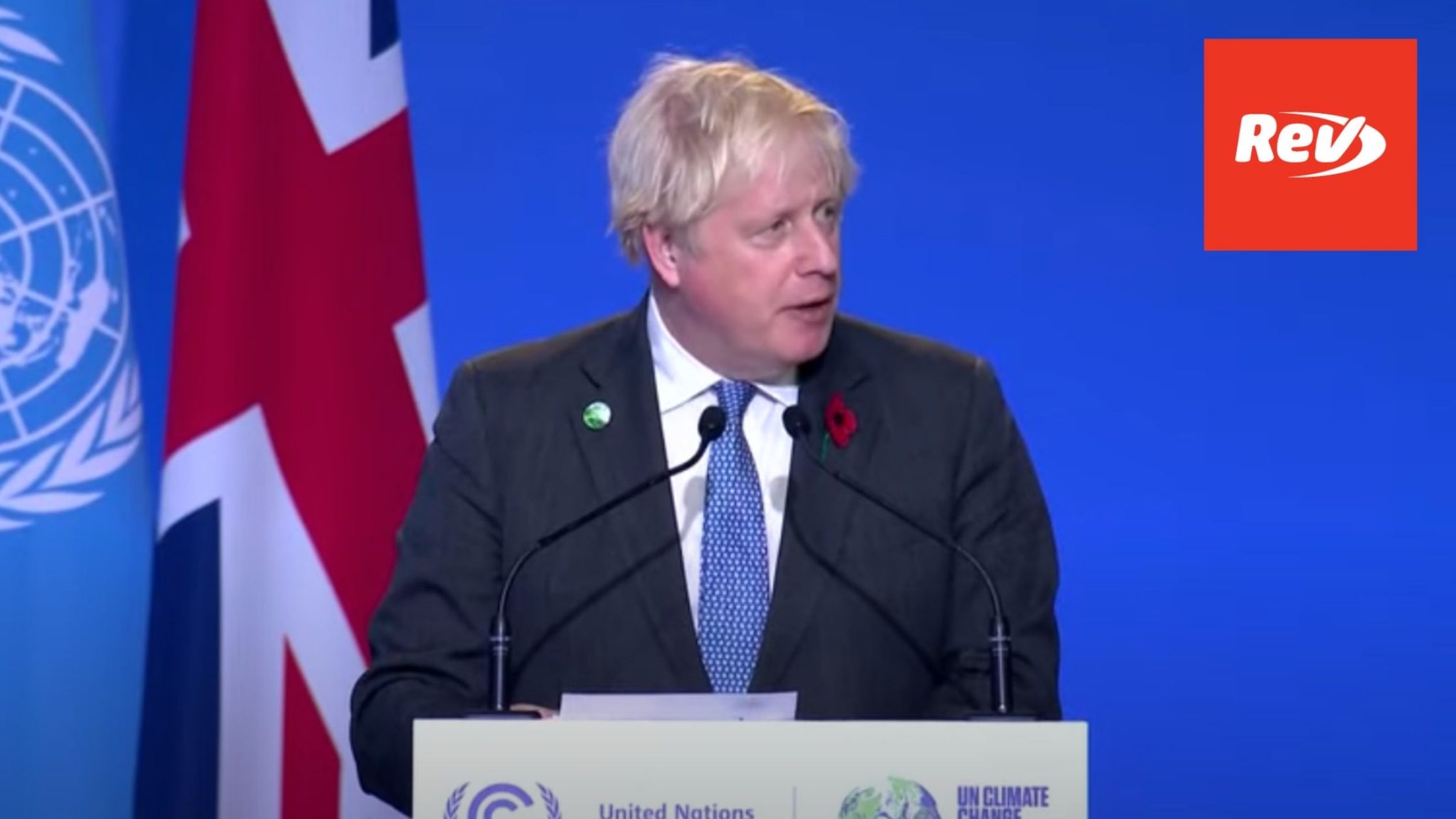 UK Prime Minister Boris Johnson spoke about climate action at the COP26 climate summit in Glasgow on November 1, 2021. Read the transcript of the speech here.

Boris Johnson: (00:13)
Good afternoon, everybody. Welcome to COP. Welcome to Glasgow and to Scotland, whose most globally famous fictional son is almost certainly a man called James Bond, who generally comes to the climax of his highly lucrative films, strapped to a doomsday device, desperately trying to work out which colored wire to pull to turn it off, while a red digital clock ticks down remorselessly to a detonation that will end human life as we know it. And we are in roughly the same position, my fellow global leaders, as James Bond today. Except that the tragedy is this is not a movie, and the doomsday device is real. And the clock is ticking to the furious rhythm of hundreds of billions of pistons and turbines and furnaces and engines with which we are pumping carbon into the air faster and faster, record outputs, and quilting the earth in an invisible and suffocating blanket of CO2, raising the temperature of the planet with a speed and an abruptness that is entirely man-made. And we know what the scientists tell us, and we have learned not to ignore them.

Boris Johnson: (01:48)
Two degrees more, and we jeopardize the food supply for hundreds of millions of people as crops, wither locusts swarm. Three degrees and you can add more wildfires and cyclones, twice as many, five times as many droughts, and 36 times as many heat waves. Four degrees, and we say goodbye to whole cities. Miami, Alexandria, Shanghai, all lost beneath the waves. And the longer we fail to act, the worse it gets and the higher the price when we are eventually forced, by catastrophe, to act. Because humanity has long since run down the clock on climate change. It’s one minute to midnight on that doomsday clock, and we need to act now. If we don’t get serious about climate change today, it will be too late for our children to do so tomorrow.

Boris Johnson: (02:55)
I was there with many of you in Copenhagen 11 years ago, when we acknowledged we had a problem. I was there in Paris six years ago when we agreed to net zero, and to try to restrain the rise in the temperature of the planet to 1.5 degrees. And all those promises will be nothing but “blah, blah, blah,” to coin a phrase, and the anger and the impatience of the world will be uncontainable unless we make this COP26 in Glasgow the moment when we get real about climate change.

Boris Johnson: (03:37)
And we can. We can get real on coal, cars, cash, and trees. We have the technology to deactivate that ticking doomsday device. Not all at once. I’m afraid it’s too late for that. But one by one, and with ever greater speed and efficiency, we can begin to close down those billions of hydrocarbon combustion chambers that you find currently in every corner of the planet.

Boris Johnson: (04:06)
We can phase out the use of cars with hydrocarbon internal combustion engines by 2035. We can do that. We in the UK are leading, by ending new sales by 2030. We can end the use of coal-fired power stations. We can do it by 2040 in the developing world, 2030 in the richer nations. We can plant hundreds of millions of trees, a trillion, it’s not technologically difficult, and halt and reverse deforestation by 2030. Not just because it’s a spiritually uplifting and beautiful thing to do, but because that is the way to restore the balance of nature and to fix carbon in the air. And as we look at the green industrial revolution that’s now needed around the world, we in the developed world must recognize the special responsibility we have to help everybody else to do it. Because it was here in Glasgow, 250 years ago, that James Watt came up with a machine that was powered by steam, that was produced by burning coal. And yes, my friends, we’ve brought you to the very place where the doomsday machine began to tick. And even though for 200 years, the industrialized countries were in complete ignorance of the problem that they were creating, we now have a duty to find those funds: a hundred billion a year that was promised in Paris by 2020, but which we won’t deliver until 2023, to help the rest of the world to move to green technology.

Boris Johnson: (05:56)
But we cannot and will not succeed by government spending alone. We in this room can deploy hundreds of billions. No question. But the market has hundreds of trillions. And the task now is to work together to help our friends to decarbonize, using our funds, the funds we have in development assistance, and working with all the multilateral development banks so that, in the key countries that need to make progress, we can jointly identify the projects that we can help to de-risk, so that the private sector money can come in, in just the same way that it was the private sector that enabled the UK to end our dependence on coal, become the Saudi Arabia of wind.

Boris Johnson: (06:51)
We have the technology. We can find the finance, and we must, and the question for us all today is whether we have the will. And my fellow leaders, as I look around this room, I don’t want to put too fine a point on it, but we all talk about what we’re going to do in 2050 or 2060. I don’t think it will escape the notice of the crowds of young people outside, the billions who are watching around the world, half of the population of the world under 30, that the average age of this conclave of world leaders, I’m afraid to say, is over 60. I fully intend to be alive in 2060. I will be a mere 94 years old, even if I’m not still in Downing Street. But you never know.

Boris Johnson: (07:45)
But the children, the children who will judge us, are children not yet born. And their children. And we are now coming center stage before a vast and uncountable audience of posterity, and we mustn’t fluff our lines or miss our cue. Because if we fail, they will not forgive us. They will know that Glasgow was the historic turning poin when history failed to turn. They will do judge us with bitterness and with a resentment that eclipses any of the climate activists of today. And they will be right. COP26 will not, and cannot, be the end of the story on climate change.

Boris Johnson: (08:36)
Even if this conference ends with binding global commitments for game-changing real-world action, two weeks from now, smoke stacks will still belch in industrial heartlands. Cows will still belch in their pastures, even if some brilliant Kiwi scientists are teaching them how to be more polite. Cars powered by petrol and diesel will still choke congested roads in the world’s great cities. No one conference could ever change that. If summits alone solved climate change, then we wouldn’t have needed 25 previous COP summits to get where we are today. But while COP26 will not be the end of climate change, it can, and it must, mark the beginning of the end.

Boris Johnson: (09:37)
In the years since Paris, the world has slowly, and with great effort and pain, built a life boat for humanity. And now is the time to give that life boat a mighty shove into the water, like some great liner, rolling down the slipways of the Clyde. Take a sextant sighting on 1.5 degrees and set off on a journey to a cleaner greener future.

Boris Johnson: (10:07)
So let us, therefore, in the next days, devote ourselves to this extraordinary task so that we not only continue with a program that is a green industrial revolution that is already creating millions of high-wage, high-skilled jobs in power and technology, taking our economies forward, let us also do enough to save our planet and our way of life. And as we work, let us think about those billions of beady eyes that are watching us around the world, increasingly edgy and disenchanted. And let us think of the billions more of the unborn, whose anger will be all the greater if we fail. We cannot let them down. We have the ideas. We have the technology. We have the bankers. We have the corporations and the NGOs. We have the interpreters. We have the meeting rooms. If all else fails, we have the unbeatable hospitality and refreshment of Glasgow.

Boris Johnson: (11:09)
We may not feel much like James Bond. Not all of us necessarily look like James Bond. But we have the opportunity, and we have the duty, to make this summit the moment when humanity finally began, and I stress “began,” to defuse that bomb, and to make this the moment when we began irrefutably to turn the tide, and to begin the fight back against climate change. Yes, it’s going to be hard. But yes, we can do it.

Boris Johnson: (11:52)
And so let’s get to work with all the creativity and imagination and goodwill that we possess. Thank you very much, and good luck to all of us. Thank you.