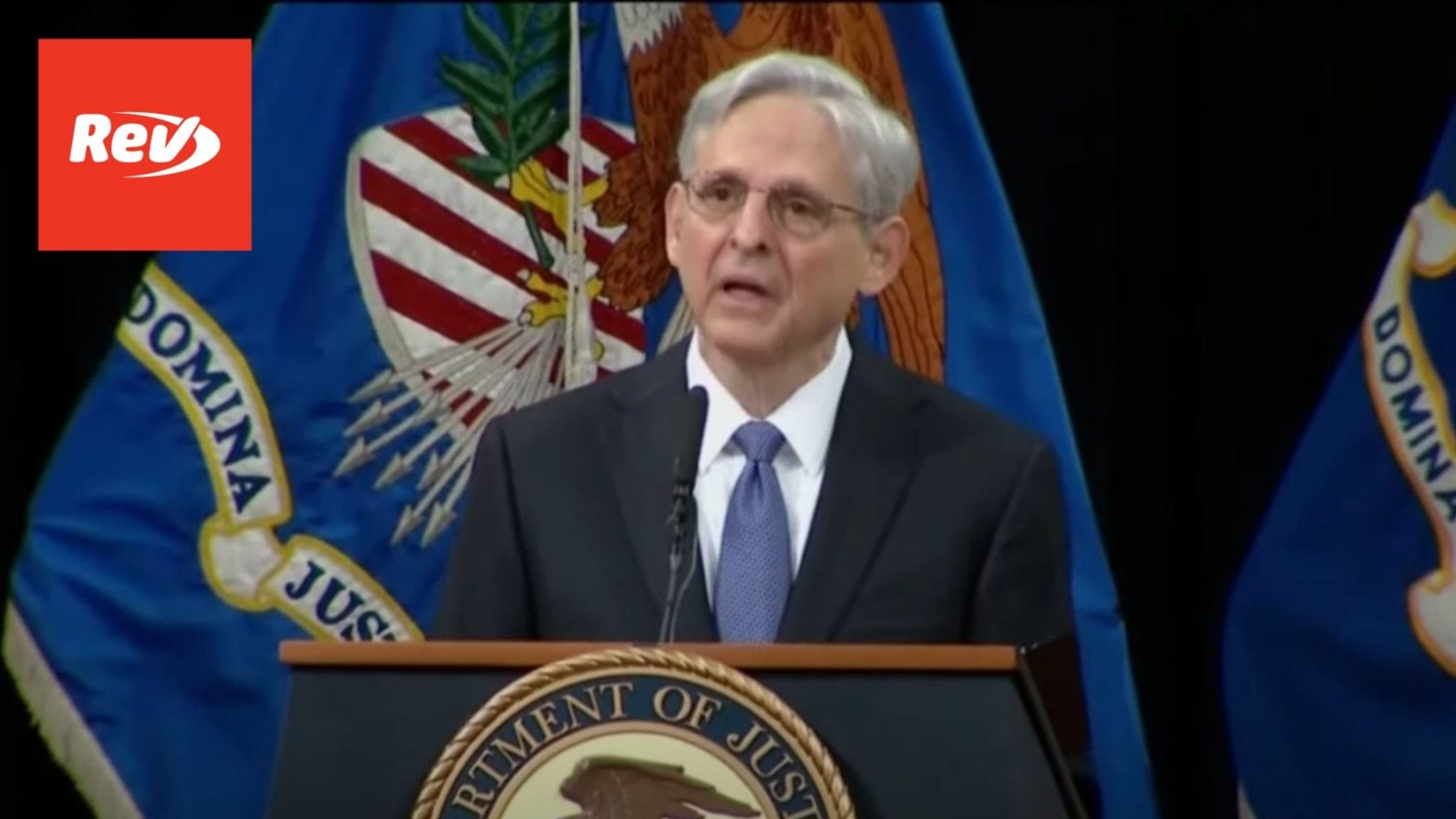 US Attorney General Merrick Garland gave his first address on March 11, 2021 after being confirmed by the Senate. Read the transcript of his full speech remarks here.

Monty Wilkinson: (00:00)
It’s my honor to welcome Merrick Garland back to the Department of Justice as the 86 attorney general Of the United States. I’d also like to recognize the attorney general’s wife Lynn, his brother-in-law Mitchell and his nieces, Laura and Andrea. In many respects, this is a welcome home ceremony for the attorney general. Before his appointment to the US Court of Appeals for the District of Columbia Circuit, he served with distinction in a number of positions here at Main Justice and as an assistant US attorney in the District of Columbia.

Monty Wilkinson: (00:45)
I first met the attorney general approximately 25 years ago when he was the principal associate deputy attorney general. I have always admired his intellect, his integrity, his commitment to public service and his humility. He recognizes the traditions of the department and trust and respects its career civil servants. He sees his role as being the lawyer for the people of the United States and making decisions that are based on the law and the facts, devoid of political considerations. During his confirmation hearing a few weeks ago, Attorney General Garland said, “It is a fitting time to reaffirm that the role of the attorney general is to serve the rule of law and to ensure equal justice under the law”. As he further noted, “This is a moment too, for recognizing the employees of the department and its law enforcement agencies and their commitment to serve the cause of justice and protect the safety of our communities”.

Monty Wilkinson: (01:54)
This is an important period in the history of our venerated institution. And we are grateful to you, Mr. Attorney General, for your willingness once again to answer the call to duty. We look forward to continuing to serve in the Department of Justice under your leadership. Thank you very much.

Merrick Garland: (02:26)
Thank you so much for those kind words, Monty. As Monty said, we first met when I was working for the deputy attorney general. Monty was an assistant US attorney. Initially a prosecutor and then a supervisor of prosecutors, Monty later jumped to the department’s offices that make everything work. First to the Executive Office for US Attorneys and then to the Justice Management Division. And for the past seven weeks, Monty has ensured that the department continued to work and to honor its proud traditions during the leadership transition between new administrations. I am deeply grateful.

Merrick Garland: (03:09)
On January 7th of this year, when the president elect announced his intention to nominate me for attorney general, I spoke to the American people. On February 22nd, when my Senate Judiciary Committee hearing began, I spoke to the United States Congress. Today, I want to speak to you. The more than 115,000 employees of the United States Department of Justice. Now I had hoped to be standing before more of you today in this great hall, but the circumstances of the ongoing pandemic will not permit it. That however is a small disappointment compared to the hardships that many of you have suffered and the additional burdens you have borne as a consequence of the pandemic.

Merrick Garland: (04:01)
I have to tell you, then when I walked in the door of Main Justice this morning, it really did feel like I was coming home. I first walked into this building when I was 26 years old. I was here for a job interview and I was awestruck. This is a beautiful hall, and this is a beautiful building built in the midst of the Great Depression. But it was the ideal of justice to which it is a monument that was truly awe-inspiring. Everywhere I looked there were serious people pursuing the cause of justice. I left the interview wanting the job, badly. The way I’m sure each of you felt after your DOJ interview, the way we want everyone who interviews at DOJ to feel. I know that was how I felt every time I came back to interview for another justice department position and after leaving my first position for private practice, I did come back many times to serve in a variety of positions, both career and non-career.

Merrick Garland: (05:15)
Along the way I worked with DOJ attorneys, agents, and staff in every component of the department and across the width and breadth of this country. Altogether, I served under five attorneys general, appointed by four presidents. I know that some of you have notched up plenty more. The Department of Justice has also been a large part of the lives of people who are close to me. My younger sister followed me to DOJ, where she served as a career attorney in the Civil Division. More than 35 of my former law clerks went on to serve at the justice department in both career and non-career positions. Many of my closest friends are veterans of the department with both career and non-career service. For all of you and for me, public service is more than a job, it is a calling. All of you have chosen the Department of Justice over other places where you might have used your skills and where you might have earned a higher salary. I am grateful beyond words for your service to this country.

Merrick Garland: (07:23)
As I said at the announcement of my nomination, those norms require that like cases be treated alike. That they’re not being one rule for Democrats and another for Republicans. One rule for friends and another for foes. One rule for the powerful and another for the powerless. One rule for the rich and another for the poor. Or different rules, depending upon one’s race or ethnicity. At his swearing in, Attorney General levy said, “If we are to have a government of laws and not of men, then it takes dedicated men and women to accomplish this through their zeal and determination and also through fairness and impartiality. And I know that this department always has had such dedicated men and women”. I too know that this department has and always has had such dedicated people. I am honored to work with you once again. Together, we will show the American people by word and deed that the Department of Justice pursues equal justice and adheres to the rule of law. Thank you.