Highlights from the Script-Based Editing Webinar 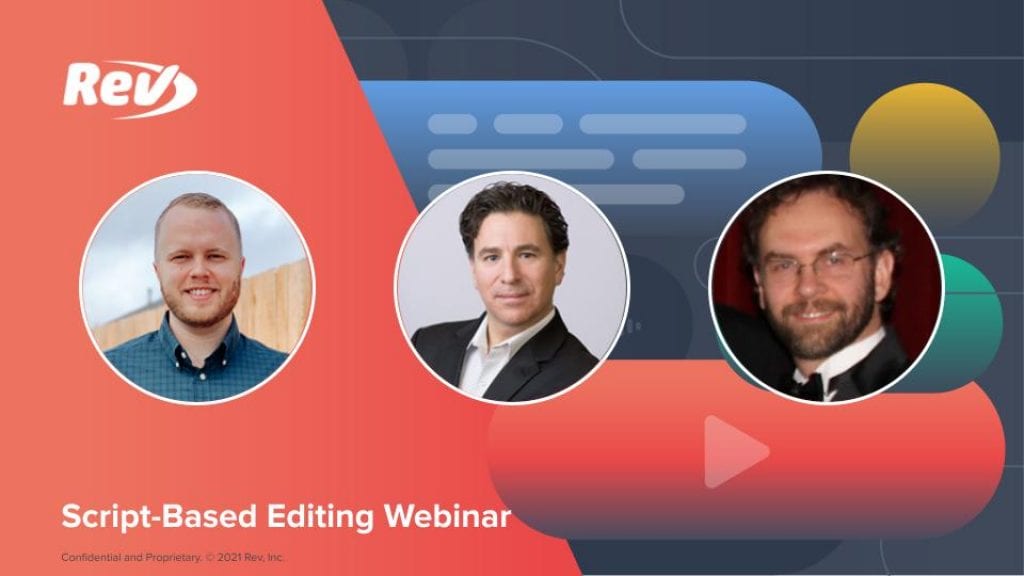 We sat down with Robert Weiss, VP at a video marketing agency, and Chris Bové, a documentary editor, to discuss how they approach the post-production process. In out chat, we discovered some interesting differences between corporate video production and documentary editing, but also some cool similarities!

We’ve compiled some great moments from the conversation. You can watch the full webinar and read the video transcript to learn more about how these pros approach script-based editing.

If you’d like to get access to Edit Decision Lists or Avid ScriptSync transcripts with Rev, fill out the respective form below.

What is transcript based editing?

Austin Canary: It’s essentially where you use transcripts of your footage in post-production in order to find sound bites and other information in the text, instead of the slower process that it would take scrubbing through hours of video footage in the editing room. The end goal is to be able to assemble together your golden moments that will best tell your final story.

The end goal is to be able to assemble together your golden moments that will best tell your final story.

Transcripts are essential to this process not only because it’s so much easier to search through text and locate dialogue in text form, but transcripts also provide timestamps and speaker labels and all this information that you need to easily reference your clips later in a video-editing software.

Chris Bové: It starts with the transcripts. You can’t make a documentary out in the field pre-writing anything. Everybody knows that. The documentary content is what happens when you’ve actually asked all the interview questions, they’ve given you the answers and now you have to look on the “wall” to see what you’re actually going to be telling.

I will do the kindergarten style thing of pulling out the crayons, pulling out the highlighters, putting out the pens, the scissors, whatever I can to piece this together before it even hits the edit bay.

I will usually work with [clients] to create the story ahead of time, sometimes even before I’ve fired up the edit system. Usually it’s about halfway before I fire up the edit system and then when I do, I’m incorporating the transcripts into the Avid script-based editing environment, which is completely based on linking the transcripts to your videos so that when you actually click on a word, the video comes up.

The transcripts need to be as amazing as possible, it can’t just be a rough idea of what somebody said.

But it all starts with needing those transcripts. And the transcripts need to be as amazing as possible, it can’t just be a rough idea of what somebody said.

Robert Weiss: I don’t really care about the story so much because with B2B, buyers just really want the information. They want it quickly. So we do our best to identify the key information working with a marketer.

A lot of times I say to my clients, “I do not care what I see in your video,” and they’re like, “What?” I care about what I hear and we can fix almost anything with what we see with the tactics that video editors have. So by utilizing the transcripts, again, it keeps them focused, number one, on the message, and number two, on the right message because there’s nuances in each take. That makes our process more productive.

How can you do script-based editing with Rev?

The first one will be the paper edit, which is a classic method.

When editors figured out, “If we transcribe our dialogue so that we can read through it quickly, we can start cutting our film a lot faster.”

Luckily, that process has evolved a lot since then. We now have ways of having a Word document, a PDF, a text file. But now, with Rev, you also have the Rev Transcript Editor. You guys can collaborate within a transcript like you would a Google doc. You can highlight things, you can share it with your team, and then you can export it in whatever format you need it in.

The second method would be the Avid ScriptSync method. Once you have your transcript from Rev, you’ll download it in a special file format specifically made for Avid ScriptSync.

You can import it and then you can sync it with your footage so that you can natively search the text and find those golden moments and those highlighted sections all throughout your clips.

The third method is Edit Decision List, which is what we have for editors who are using other non-linear editors like Adobe Premiere Pro. The Edit Decision List workflow relies heavily on the Rev Transcript Editor. You and your team can hop into the Rev Transcript Editor and highlight selects, and then export that as an EDL to later use in Adobe Premiere Pro to create an assembly sequence.

What are some other benefits of using transcripts with video?

Robert: Google does not read video from a search perspective (SEO). One of the number one goals of my clients is lead generation. How am I going to attract and convert leads to get into the sales pipeline? Search is such a huge aspect of lead generation today that that was the first thing.

We created this thing called a video-first strategy, which we’ve been talking about for almost five years now, is starting with that video. What we found is that people can talk quicker that they can write. Right now you asked me a question. Imagine if I had to write this answer?

How do you start piecing together a documentary from scratch?

Chris: Once you have [the footage] transcribed and you can start seeing everything that you have, then all of a sudden you become, I would almost call it if you’re doing a document on a person, you have to become that person’s family archivist.

Then, you start looking at the transcript and you just start highlighting. You just start deciding what needs to be told about this person.

How do transcripts help you avoid making “dry” videos?

Robert: You start with a plan or a script you execute maybe in a linear fashion, and then you need to put it together from a verbal standpoint and from a visual standpoint. When I was mentioning dry, is because when you’re buying a product, sometimes there’s no emotion in it.

They’re there for making a business purchase. I need the information and I need that delivered. But you know what? At the same time, we do have a person giving that information and we do need to make it flow. Because if it does not capture their attention and it doesn’t keep them engaged within that video, again, from a verbal standpoint, getting the information and from a visual standpoint, they’re going to move on to the next company. They will never move to the next stage of the buying cycle and our clients won’t come back to us.

Chris: The short way of doing it is you don’t even put it in the edit system yet. You start looking at the transcript and you just start highlighting. You just start deciding what needs to be told about this person.

Now it becomes your film as opposed to just the Wikipedia article on this person. That can’t happen. Well, it can happen if you want to spend three to four years working on it, but that can’t really can’t happen in a practical world unless you’re using transcripts.

You can watch the full webinar on script-based editing to hear more on how these pros use transcripts to produce amazing videos.

If you’d like to get access to Edit Decision Lists or Avid ScriptSync transcripts with Rev, fill out the respective form above.