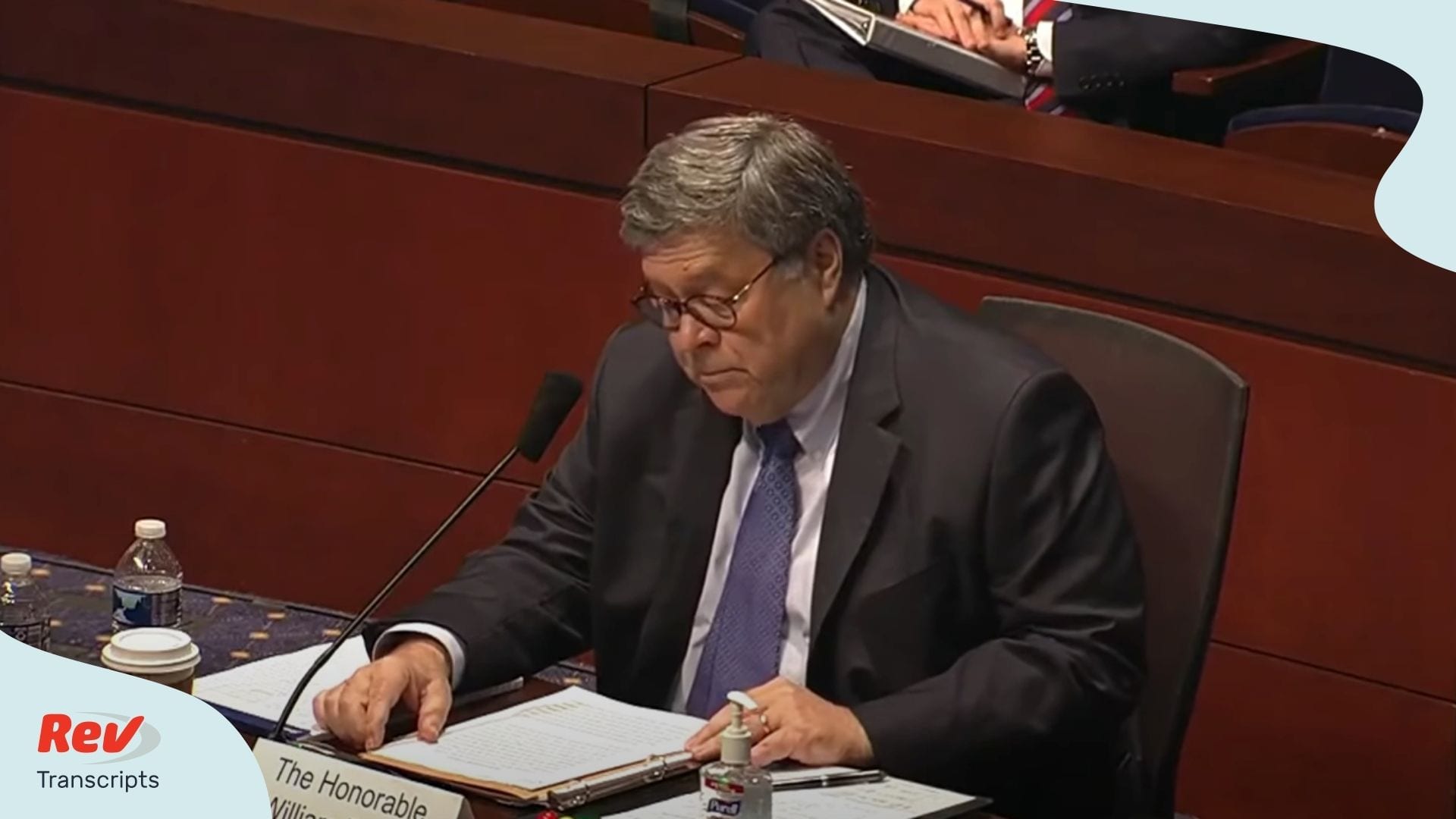 William Barr: (00:07)
On behalf of the Department of Justice, I want to pay my respects to your colleague, Congressman John Lewis, an indomitable champion of civil rights and the rule of law. I think it is especially important to remember today that he pursued his cause passionately and successfully with unwavering commitment to non-violence.

William Barr: (00:29)
As I said in my confirmation hearing, the Attorney General has a unique obligation. He holds in trust the fair and impartial administration of justice. He must ensure that there is one standard of justice that applies to everyone equally and that criminal cases are handled evenhandedly based on the law and the facts and without regard to political or personal considerations.

William Barr: (00:55)
I can tell you that I’ve handled criminal matters that have come to me for a decision in this way. The President has not attempted to interfere in these decisions. On the contrary, he has told me from the start that he expects me to exercise my independent judgment to make whatever call I think is right. That is precisely what I’ve done.

William Barr: (01:16)
Indeed, it’s precisely because I feel complete freedom to do what I think is right that induced me to serve once again as Attorney General. As you just said, Mr. Chairman, I served as Attorney General under President George H. W. Bush; and after that, I spent many years in the corporate world. I’m almost 70 years old. I was almost 70 years old and slipping happily into retirement. I had nothing to prove, and I had no desire to return to government. I had no prior relationship with President Trump.

William Barr: (01:48)
Let me turn briefly to the several pressing issues of the day. The horrible killing of George Floyd in Minneapolis understandably jarred the whole country and forced us to reflect on longstanding issues in the nation. Those issues obviously relate to the relationship between law enforcement and the African-American community. Given our history, it’s understandable that among black Americans, there’s [inaudible 00:02:14] some ambivalence and often distrust toward the police. Until just last 50 years ago or so, our laws and our institutions were explicitly racist, explicitly discriminatory. It was not until the ’60s that the civil rights movement finally succeeded in tearing down the Jim Crow edifice. Our laws finally came to formally embody the guarantee of equal protection. Since then, the work of securing civil rights has rightly focused on reforming institutions to ensure they better conform to our laws and to our aspirations. That work, it’s important to acknowledge, has been increasingly successful. Police forces today are far more diverse than they’ve ever been, and there are both more black police chiefs and more black officers in the ranks.

William Barr: (03:09)
Although the death of George Floyd at the hands of the police was a shocking event, the fact is that these events are fortunately quite rare. According to statistics compiled by the Washington Post, the number of unarmed black men killed by police so far this year is eight. The number of unarmed white men killed by police over the same period of time is 11, and the overall numbers of police shootings have been decreasing. Nevertheless, every instance of excessive force is unacceptable and must be addressed appropriately through legal process, as is happening now in Minneapolis.

William Barr: (03:45)
But apart from the numbers, I think these events strike a deep chord in the black community because they are perceived as manifestations of a deeper, lingering concern that in encounters with police, blacks will not be treated evenhandedly. They will not be given the benefit of the doubt. They will be treated with greater suspicion. Senator Tim Scott has recounted the numerous times he’s been unjustifiably pulled over on Capitol Hill; and as one prominent black professional in Washington said to me, “African-Americans often feel treated as suspects first and citizens second.” I think these concerns are legitimate.

William Barr: (04:22)
At the same time, I think it would be an oversimplification to treat the problem as rooted in some deep-seated racism generally infecting our police departments. It seems far more likely that the problem stems from a complex mix of factors, which can be addressed with focused attention over time. We in law enforcement must be conscious of the concerns and ensure that we do not have two systems of justice.

William Barr: (04:50)
Unfortunately, some have chosen to respond to George Floyd’s death in a far less productive way by demonizing the police, promoting slogans like, “All cops are bastard,” and making grossly irresponsible proposals to defund the police. The demonization of the police is not only unfair and inconsistent with principles of all people should be treated as individuals, but gravely injurious to the inner city communities. When communities turn on and pillory the police, officers naturally become more risk-averse and crime rates soar. Unfortunately, we are seeing that now in many of our cities. The threat to black lives posed by crime on the streets is massively greater than any threat posed by police misconduct.

William Barr: (05:38)
The leading cause of death for young black males is homicide. Every year, approximately 7,500 black Americans are victims of homicide. The vast majority of them, around 90%, are killed by other blacks, mainly by gunfire. Each of those lives matter. It is for this reason then, in selected cities where there has been an upsurge in violent crime, we are stepping up and bolstering the activities of our joint anti-crime task forces.

William Barr: (06:09)
Finally, I want to address a different breakdown in the rule of law that we’ve witnessed over the past two months. In the wake of George Floyd’s death, violent rioters and anarchists have hijacked legitimate protests to wreak senseless havoc and destruction on innocent victims. The current situation in Portland is a telling example. Every night for the past two months, a mob of hundreds of rioters have laid siege to the Federal Courthouse and other nearby federal property. The rioters have come equipped for fight, armed with powerful slingshots, tasers, sledgehammers, saws, knives, rifles, and explosive devices. Inside the courthouse are a relatively small number of federal law enforcement personnel charged with the defensive mission to protect the courthouse. What unfolds nightly around the courthouse cannot reasonably be called protest. It is, by any objective measure, an assault on the government of the United States.

William Barr: (07:17)
As elected officials of the federal government, every member of this committee, regardless of your political views or your feelings about the Trump administration, should condemn violence against federal officers and the destruction of federal property.

William Barr: (07:32)
Thank you, Mr. Chairman, and I appreciate your listing for me the areas of concern in your opening statement, and I’m looking forward to addressing them all.