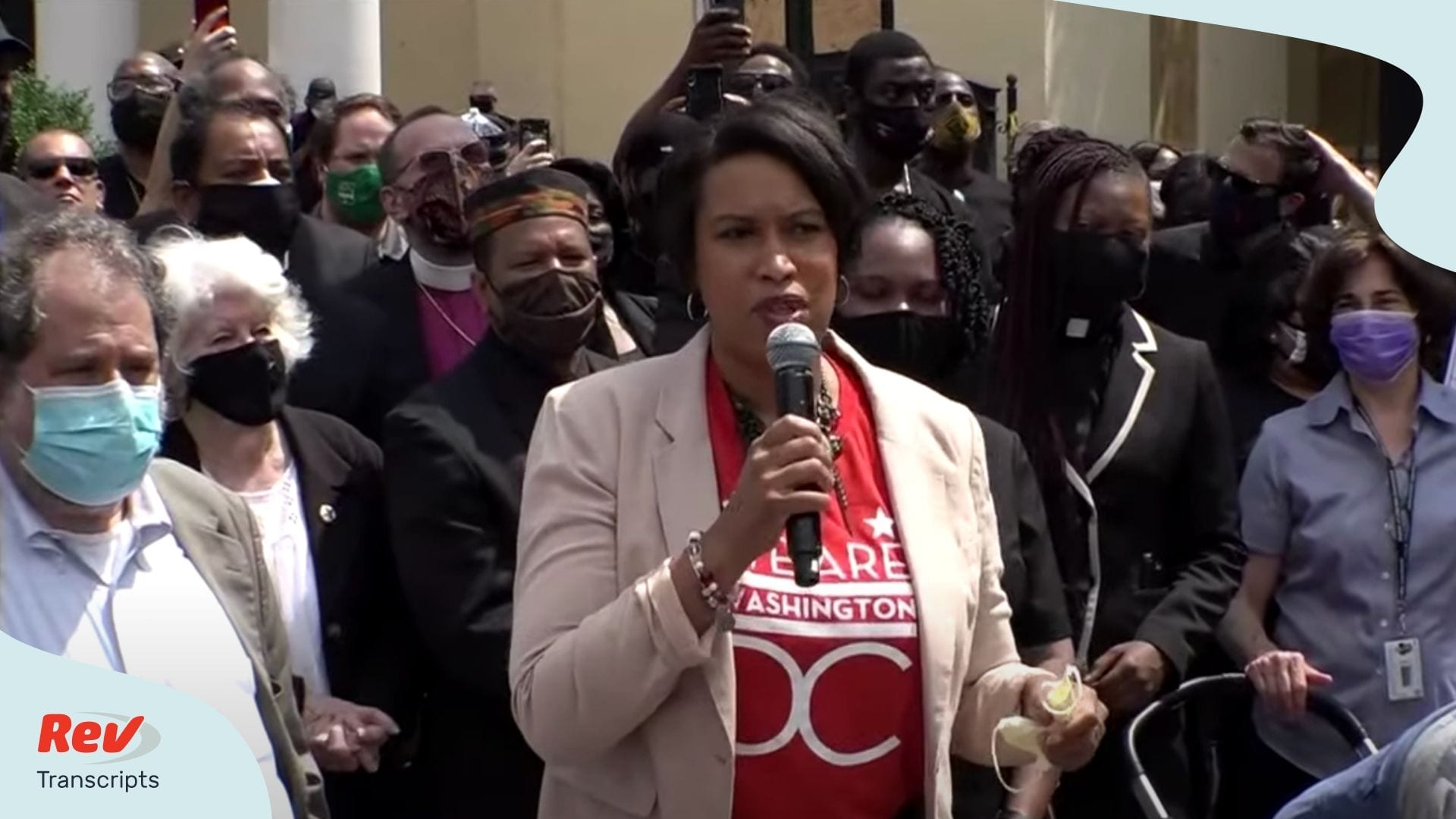 Washington D.C. Mayor Muriel Bowser gave a speech at the unveiling of “Black Lives Matter Plaza”. At the site, “Black Lives Matter” is painted in 50-foot yellow letters near the White House on a section of 16th Street that sits just in front of Lafayette Park. Read the transcript of her speech here.

Mayor Muriel Bowser: (01:07)
We are here peacefully as Americans on American streets, on DC streets, where here people of all backgrounds and beliefs from all eight wards of Washington, DC to exercise our First Amendment rights. So as Washingtonians, we simply all want to be here together in peace to demonstrate that in America, you can peacefully assemble. You can bring grievances to your government and you can demand change. And that’s my message today. God bless you all.

Journalist: (02:14)
Mayor Bowser, can you address the controversy over National Guard troops being evicted from the Marriott Marquis?

Mayor Muriel Bowser: (02:28)
Certainly we’re not in a position to evict anybody from a private hotel. We have reached out to the Senator from Utah to let him know that the Department of the Army, I’m sure, we’ll work out the arrangements they need to work out with the hotel.

Journalist: (02:46)
But a lot of these soldiers got off an overnight shift at 10:00 AM, they have nowhere to sleep after working all night, protecting the streets.

Mayor Muriel Bowser: (02:54)
It’s our expectation that until soldiers are called home, we don’t think that soldiers should be in the nation’s capital patrolling or policing streets. We’ve made that formal request to the White House. We have no desire to have any soldier out on the street, but DC residents can’t pay their bills. So either the Department of the Army or their home states will have to take care of their arrangements. We.

Journalist: (03:18)
Should the police be defunded?

Mayor Muriel Bowser: (03:20)
We support our metropolitan police department. We know they do a wonderful job protecting DC streets. We work hard every day to make sure we have the type of police and community relationships that will allow us to have safe neighborhoods and we do it every single day.

Journalist: (03:36)
What do you say to people in other parts of America who don’t understand the issue around DC statehood?

Mayor Muriel Bowser: (03:40)
Well, I’m glad you asked because we know a lot of people in America don’t understand DC statehood. We are 700,000 people here. We pay taxes, just like every American. In fact, we pay more taxes than 22 states, we’re larger than two states. We have a shadow representative in the Senate. He doesn’t get to vote, which means we don’t have two voting members of the Senate. But I think what we have seen in the last couple of days is yes, we need representation in the Senate. We need our Congresswoman to have the vote. But yet, also with statehood is full autonomy because the federal government should not be encroaching on tax-paying Americans.

Journalist: (04:21)
Mayor Bowser, tell me about this street sign and the street it’s in.

Mayor Muriel Bowser: (04:24)
Well, thank you. So I think that we’ve all been troubled by graffiti. If you know me, and everybody in DC knows, we have a beautiful city, we work hard with the best department of public works in the entire nation. Let’s hear it for DPW.

Mayor Muriel Bowser: (04:38)
And none of us tolerate graffiti. But one thing that we have found to combat graffiti is art. And we have a program in Washington called MuralsDC, where we reach out to artists across our city to take places that may have been targeted by graffiti and turn them into beautiful messages and beautiful art and that’s what you see here today.

Journalist: (05:05)
How many people are we expecting this weekend?

Journalist: (05:05)
Mayor, how many people do you expect tomorrow and what precautions or preparations are you doing for them?

Mayor Muriel Bowser: (05:10)
Our chief of police will be briefing out on our plans for tomorrow, but what our expectation is that everybody will come here peacefully, they will demonstrate, and then they will go home.

Journalist: (05:21)
Are there going to be National Guard units here tomorrow?

Mayor Muriel Bowser: (05:23)
We expect that there will be sizable crowds. In fact, we have seen more sizable crowds since Monday and part of that, and we’re happy to see, is that the people who have shown up have been peaceable protesters, and they have outnumbered the people who came here to do destruction. And let me be very clear about something, anybody who’s here to do destruction will be dealt with by our police department.

Mayor Muriel Bowser: (05:50)
What we have to say to the young black youth is that they matter, we care about them, and we hear them, and we’re listening to them, and we’re trying to make all of our systems starting right here in Washington, DC, more fair.

Journalist: (06:02)
Mayor Bowser are you hoping that the President will see that sign?

Journalist: (06:02)
What do you expect to hear from the White House about what happened on Monday?

Journalist: (06:08)
What you expect to hear from the White House in response to your letter about what happened on Monday?

Mayor Muriel Bowser: (06:13)
We have a formal request in and we expect to get a response.