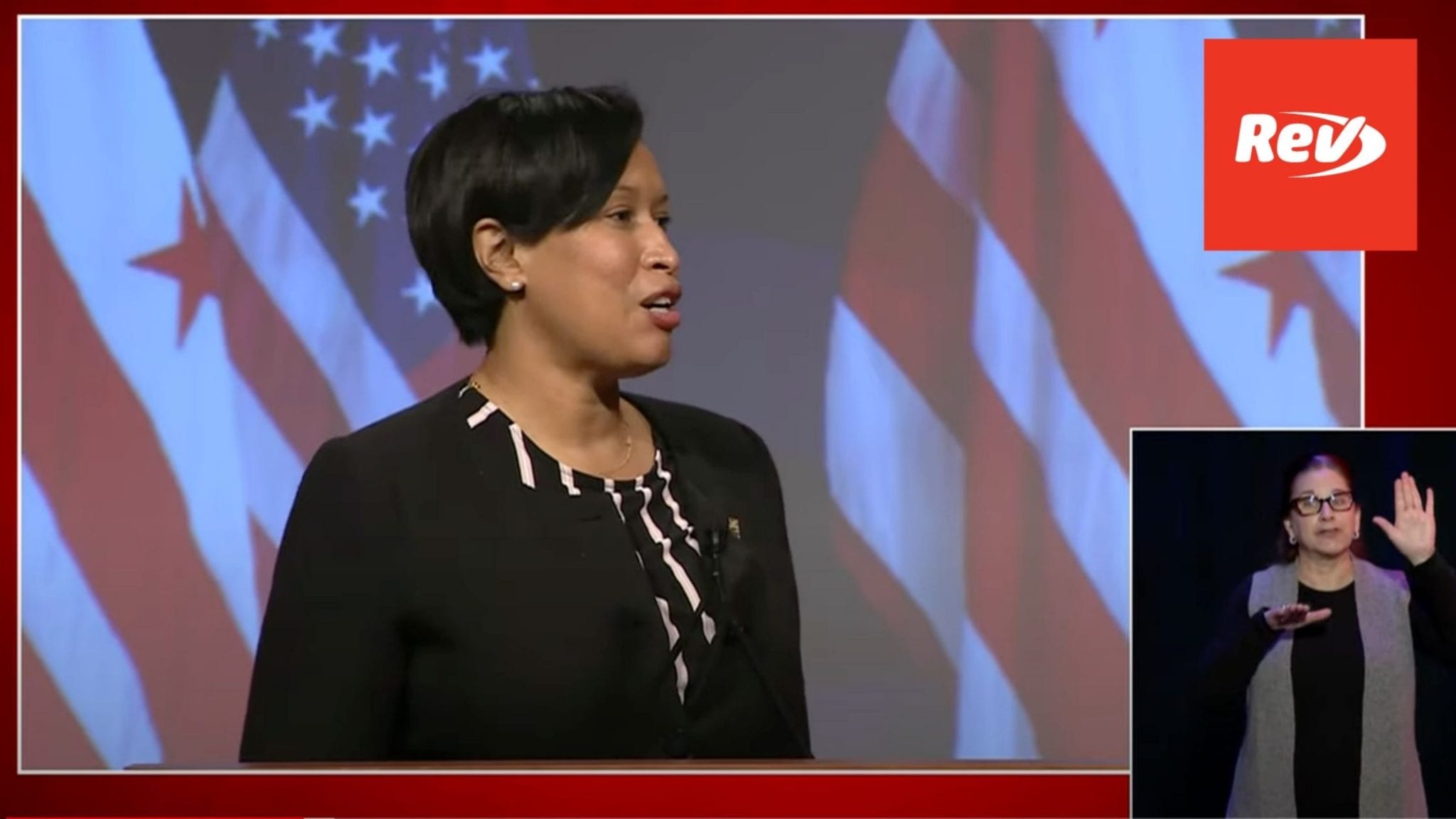 Mayor Bowser: (00:00)
… seemingly with the intent to capture the Vice President of the United States and perhaps harm other lawmakers. So we all have to think about a new posture. We certainly have to think about a new posture in the city. So while we are focused on January the 20th, we’re also focused on January the 21st and every day thereafter in the nation’s capital.

Kenneth Moton: (00:30)
Hi, thank you. And to everyone on the stage as well. Kenneth Moton with ABC News. I just want to follow up on that last question, just because I wanted to drill down on that, is that, do you expect many of the security measures we see now to last well after the President-Elect takes office to continue providing that protection and helping the secret service provide that protection to President Biden, to Vice President Kamala Harris.

Mayor Bowser: (00:52)
We do not expect to have visiting National Guard throughout the city for weeks to come. No, we don’t expect that, but I do think that we have to replace that sense of security in other ways. So we certainly, from the district’s perspective, we’ll be thinking about that. We’re actually also thinking about how our partnership with the federal government has to change so that we can have that increased sense of security. I won’t bore you with the details of how we’re budgeted to support our special security because we’re the nation’s capital, but those issues have to be dealt with. We also have to be dealt with the complicating factor of not being a state, in that the mayor of the District of Columbia does not command the DC National Guard. We know that that’s a complicating factor. So there are many things that we as a city will have to reset in terms of our posture in policing, and all of our homeland agencies that support first amendment demonstrations. What will that reset look like?

Kenneth Moton: (02:10)
And Mayor, you touched on it, but I want to ask one more time, since the world has seen your city, the nation’s capital look more like a fortress, look more like a military base. You touched on it there, but I still have to ask you what goes through you when you see your city looking the way it does now? Is there a disappointment? Is there a realization that this is the reality that we’re in?

Mayor Bowser: (02:33)
I’m sad about it. I have to tell you that it looks that way. I’m committed to making sure that we get our city back, our visitors, our residents, our workers will be able to get through the city with ease, but I also know that we have a special responsibility, that there is a peaceful transition of power in our country. We’re proud in Washington to host the federal government, and we want to make sure that that event is peaceful.

Amanda: (03:12)
Hi, Amanda with the Washington City Paper. A follow on that, Mayor, do you think the fence around the Capitol should stay or, I mean, do you think that should be the first to go after all of this?

Mayor Bowser: (03:24)
Amanda, I generally don’t like fences, as you know, but I also see why it’s important, especially now. It’s important for a couple of reasons. First of all, those fences allow these police professionals to be able to deploy the human resource that they have, the officers, in a more efficient way. In other times, we were more concerned about interactions between police and people, and that fence is an additional barrier to reduce some of those interactions. So I think we are concerned about any fencing that’s up in the District of Columbia would move … It is a temporary fence. It’s not a permanent fence. You see how quickly it goes up. It can just as quickly come down. But we want to make sure that there’s not only a real replacement for what it provides, but the sense of safety that everybody in and around those facilities has is important. So, we haven’t fully developed a recommendation to our federal partners about when and how it comes down.

Amanda: (04:32)
Thank you. And my last question is, what are the estimated costs for all of this, given the heightened security? I mean, I know the last I heard, the District requested, was it 45 million to Congress? Do you have any-

Mayor Bowser: (04:44)
Okay. I’m going to ask Chris Rodriguez to come up, who’s the Director of the District’s Homeland Security Agency. He’s also going to talk to you about a very specific process that we put in place to protect the District and make sure that we had a seamless process for federal assistance. Director Rodriguez.

Chris Rodriguez: (05:08)
Thank you, Mayor, and thank you for the question, Amanda. The District over a year ago, as we were beginning preparations for the inauguration, reached out to all our public safety and support agencies to estimate our cost for the inauguration, and we estimated those costs at $34.9 million. That was our request to Congress for the District’s Inauguration Fund. It’s important to note that part of our request was also looking at deficits that we had run in our emergency planning and security fund, which is annually appropriated by Congress, because of the heightened number of first amendment demonstrations we’ve seen throughout the year. So as we were planning for this specific inauguration, after the first amendment demonstrations that we saw over the summer, we changed that number to, as you mentioned, 44.9 million, roughly $45 million. That additional 10 million was not approved, and it still has not been approved at this time.

Chris Rodriguez: (06:11)
In terms of our, the Mayor mentioned some of the federal assistance that we’re putting in place. Mayor Bowser requested of FEMA, a pre-disaster emergency declaration for the inauguration last week. That was approved on Monday. And as Administrator Tierney mentioned, through the District’s Emergency Operation Center, we’ve been able to coordinate all of our resource requests, not only for public safety, but also for health and medical, for public works, to make sure that they had all the federal assets that they needed to support the entire inauguration process. So that’s being run out of our EOC, and we have FEMA there now helping us with those coordination and requests.

Sarah Payne: (07:00)
Hi, Sarah Payne from Capital Community News. There have been reports of National Guard members asking residents in neighborhoods surrounding the Capitol to show identification before they can return home. What are the boundaries in which residents will need to do this?

Chief Contee: (07:21)
Yeah. So, thank you for the question. We want to make sure that residents are able to get access to their home. So in the event that, in the efforts to ensure security around the Capitol, that also bumped out to some of the neighborhoods and there’s a fence line there. If residents were to show their ID again, the National Guard members that are there are primarily there for traffic control, they should be able to gain access to that area and should not incur any issues. If they do, please feel free to reach out to the Metropolitan Police Department. We’ll coordinate with our secret service partners as well to resolve any issues that members in the community may be having.

Sarah Payne: (08:03)
Okay. And then what steps are being taken to secure those residential areas and neighborhoods surrounding that Capitol perimeter area?

Chief Contee: (08:11)
So, we have strategically placed resources, again, Metropolitan Police Department resources in different areas around the Capitol footprint to ensure, again, a sense of safety and security for our residents. The federal resources are here, and we’re very appreciative of that. That relieves us of the responsibility of having to take care of federal buildings in the downtown footprint. So we have officers that are deployed to the communities to ensure safety and security.