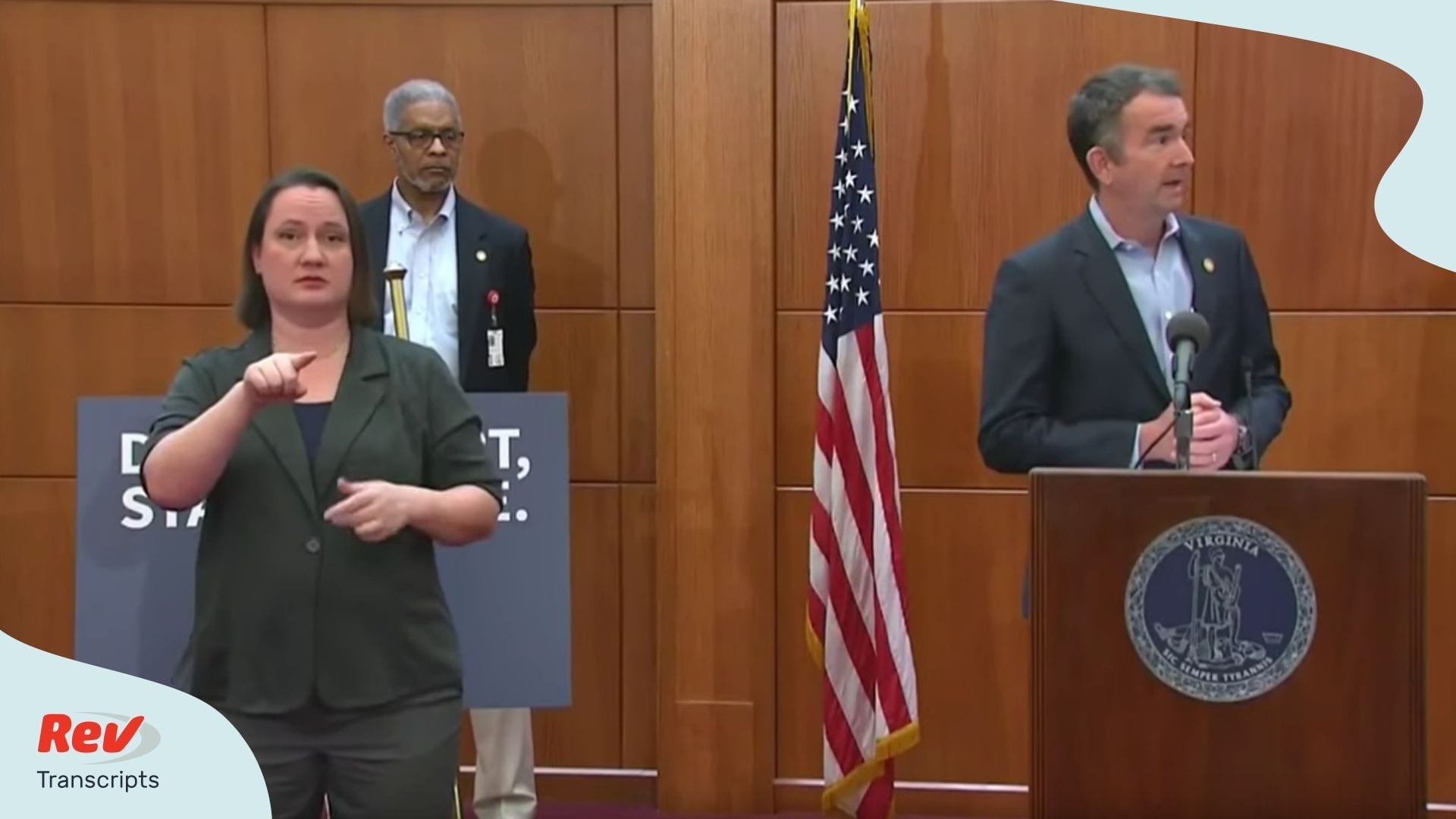 Virginia governor Ralph Northam held his daily coronavirus press conference on April 1. He said the peak for VA cases may not be until late May. Read the full transcript of the briefing here.

Speaker 1: (00:00)
For you all to sort of clarify that … Like how you think, or would like judges and prosecutors to be handling those kinds of cases?

Speaker 2: (00:09)
The question is with respect to how the criminal justice system is responding to this, generally how they responded to this crisis, particularly judges, prosecutors, law enforcement. And I will say I am in touch with sheriffs and members of that law enforcement community and our public safety officials regularly. I mean, daily on the phone with them and in contact with their association representatives as well. What I am hearing is they are responding. They are responding responsibly. They are releasing low level offenders, and not allowing some of them even to come into the system by use of what’s called a summons by law enforcement, not even introducing them before the magistrate or into the criminal justice system. So we believe the governor’s guidance has been quite direct and forceful to all concerned, particularly the criminal justice system.

Speaker 2: (01:11)
We are monitoring their efforts and I think it has actually been a very positive response. They’re responding very, very well and understand the significance and importance of the distancing and trying to reduce those … Increase the capacity in our jail so that if one were to have a positive test, they could implement the CDC guidelines. Many … And the sheriffs I’ve spoken to, the capacity, they really have increased capacity by reducing population. Virginia Beach I think is about 50%, I was on the phone with the sheriff in Fairfax just recently. They have reduced their population so to increase capacity for those, if in case they do have a positive that they can follow the CDC guidelines.

Speaker 3: (01:59)
Alrighty. One more on the phone and then one more in the room. Tessa Cajool with WSLS in Reno.

Ralph Northam: (02:24)
I don’t know. The question is in Southwest Virginia. Why we have a smaller number of individuals that are testing positive. I think that it’s fair to say that we’re seeing the highest increase, highest number of positives in dense populations across Virginia. Certainly in rural Virginia, and I am from rural Virginia. We tend to be a little bit more spread out and don’t gather in large groups. And so I think that’s part of the reason for that. As far as the testing capabilities, when individuals have symptoms, if they’ve traveled, if they’ve had contacts, et cetera, they’re going through the same screening mechanism, and if they meet those criteria, then they’re being tested. But I think a lot of your question is related to the decrease or the less population in our rural areas of Virginia.

Speaker 6: (03:29)
Yeah. Quickly, do you have a sense at the state level of enforcement on the 10% gathering ban and second about testing, given that the state’s capacity has grown, are there any changes to the criteria who was prioritized? My question is if we have more tests, what are we doing with that larger capacity?

Ralph Northam: (03:49)
Couple of questions. The first was about enforcement and I think that in talking to a lot of our law enforcement agencies across Virginia, they are taking this very seriously. We have had discussions with them for example in Hampton Roads after what we saw this past weekend. And so I would just encourage Virginians to take this seriously as well and to know that if they don’t abide by the 10 or less rules that they are at risk of receiving a citation and a class one misdemeanor. So hopefully that answers that. And the second part of your question was-

Dr. Tony: (04:49)
If I understand your question correctly, you’re really asking about the criteria that we use for testing, and the criteria has been set by the Virginia department of health. It’s been broadened since the beginning of this pandemic, but we still have a limited number of tests. We’ve had expansion in that number, but it’s not at the level where we can just do broad based population-based testing. So we have focused in on those areas, populations that are at highest risk so that we can identify cases there quickly, and do the contact investigation. And at this point we haven’t envisioned changing those criteria.

Dr. Tony: (05:46)
So you’re asking whether or not we might expand from beyond just nursing homes to the elderly population in general. And what we’ve focused on is on those who are in the … As you’ve seen from around the country, nursing home facilities, assisted living facilities and hospitals have been the places where the most … The highest risk patients have been. And those are the areas that we’re focusing on. And we’ll continue to do that for the foreseeable future

Speaker 9: (06:27)
Thank you. So the question was about testing capacity and we did have one significant change this week. The state laboratory completed our evaluations of automation and being able to run larger batches and we were able to double our throughput per day testing. So prior to this week we were processing or had at capacity to run about a hundred patients a day with reporting out those results same day, and now we have doubled that capacity. Which came timely in the fact that we’re seeing more community spread, as well as we’re seeing increasing outbreaks in nursing homes, in institutional settings, and in other communities. So our ability to process double the number of patients in a day allows public health to respond more rapidly to those outbreak and emerging disease situations.

Speaker 9: (07:30)
So right now we have … We are still receiving reagents in, we got a shipment and yesterday and we have over about 2,000 tests in house, and we’re expecting more reagents in this week.

Ralph Northam: (07:46)
Thank you. I think just to follow up as we get closer to the peak when we’re really at the surge, which again we predict to be in May at some point, the amount of testing and I commend all that’s been done with testing in Virginia and also with PPE, but we’d still need more efficient, more effective tests in as we get into that peak time because that will not only help us know who’s sick, who’s at risk, but it will also let us know about our staff. Have they been exposed, are they healthy? So a lot is going on in the area of testing. As you know, we’re talking about a 15 or 20 minute turnaround now that is in the pipeline to look at antibody testing to see if someone has had it in the past, and so that is very important.

Ralph Northam: (08:36)
Also, again, as I mentioned earlier, the more PPE that we have, the better, as we go into that surge. And then the testing will be especially helpful as we come off of the curve, as we start making decisions when we can get back to life as we used to know it. And so we are working every day to improve both our access to testing as well as the PPE. Thank you all so much for being here today, and appreciate everybody’s cooperation in Virginia. And as I’ve said, I know these are difficult times for Virginians. They’re difficult for all of us. We are all making sacrifices, but Virginia is the best state in the best country in the world and we’re strong and we’re going to get through this together. So hang in there and we will look forward to speaking to you on Friday. Thank you very much.