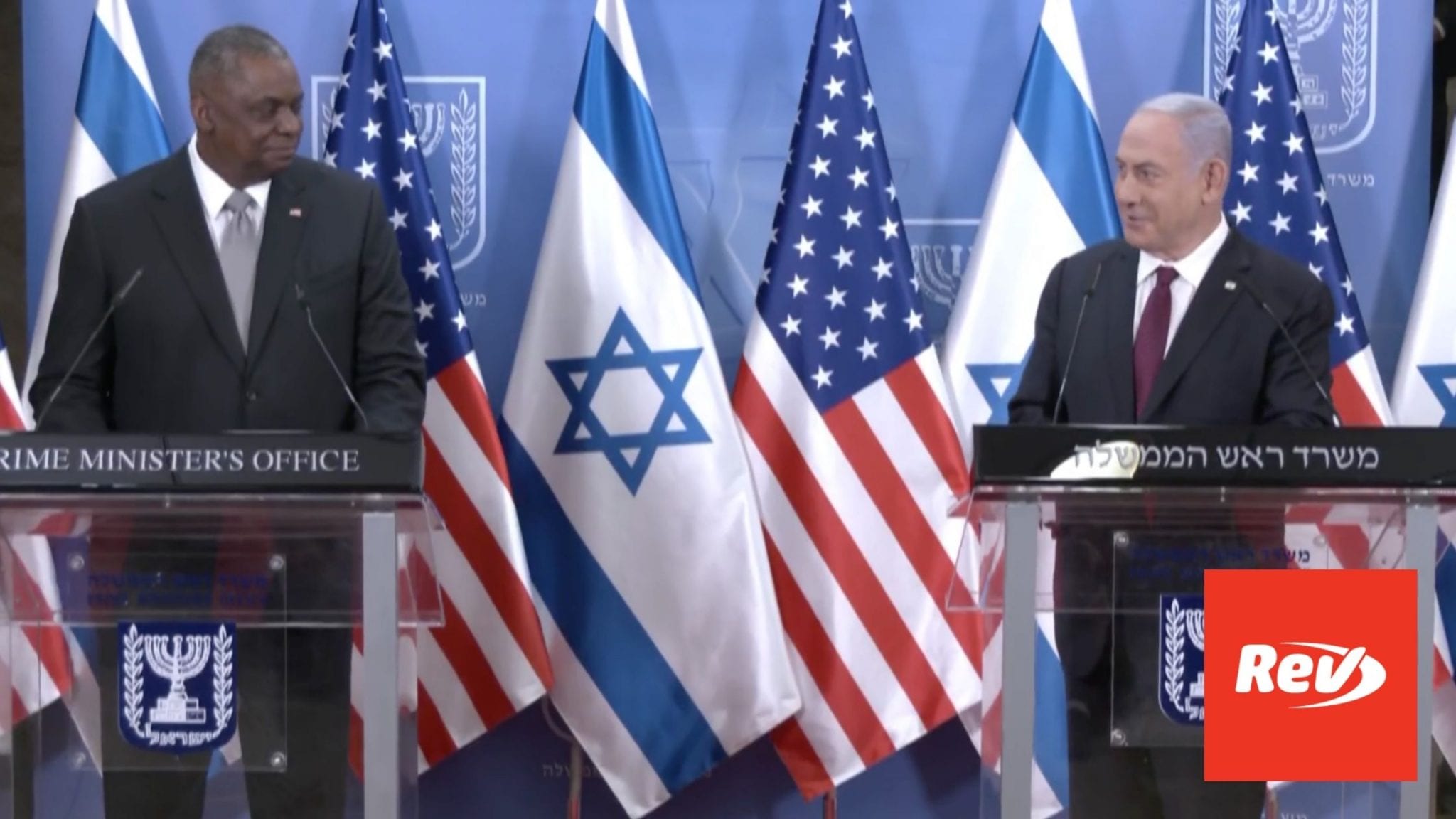 Benjamin Netanyahu: (06:55)
Secretary Austin, welcome to Jerusalem. Your visit here so soon after assuming office is a testament to the importance you attach to our friendship and to our Alliance. You just said a moment ago in our meeting, you said we’re not just allies, we’re family. We call that [foreign language 00:07:14] and there is so much truth in that statement that our people instinctively understand.

Benjamin Netanyahu: (07:24)
As you know, the US Israel Defense partnership has continually expanded over successive administrations. And our cooperation is crucial in dealing with the many threats, confronting both the United States and Israel. Threats that you’re very familiar with from your distinguished service in Iraq and by your command in CENTCOM.

Benjamin Netanyahu: (07:47)
In the Middle East, there is no threat that is more serious, more dangerous, more pressing than that posed by the fanatical regime in Iran. Iran continues to support terrorists around the world in five continents, threatening civilians everywhere. Iran has never given up its quest for nuclear weapons and the missiles to deliver them and Iran consistently, consistently and outrageously, calls for Israel’s annihilation and works towards that goal.

Benjamin Netanyahu: (08:17)
Mr. Secretary, we both know the horrors of war. We both understand the importance of preventing war and we both agree that Iran must never possess nuclear weapons. My policy as prime minister of Israel is clear. I will never allow Iran to obtain the nuclear capability to carry out its genocidal goal of eliminating Israel and Israel will continue to defend itself against Iran’s aggression and terrorism.

Benjamin Netanyahu: (08:47)
You have just come from Yad Vashem. We a few days ago celebrated, not celebrated, but marked the anniversary of the destruction of our people in the Holocaust. And I think as I know, also from our conversation, that you understand perfectly well, that when we say it could never happen again, we mean that we will never let it happen again. This is something that I think you, the President and the American people respect, and we appreciate that. Secretary Austin, I can say with great confidence that Israel has no greater ally and certainly no greater [foreign language 00:09:37] than the United States of America. And I can say equally that the United States has no greater ally and no better [foreign language 00:09:46] than the state of Israel. So welcome. Welcome to Jerusalem

Lloyd Austin: (09:51)
Well, good afternoon, everyone. And thank you Mr. Prime Minister for the warm welcome and again, my deepest thanks and appreciation to the people of Israel for their gracious hospitality.

Lloyd Austin: (10:06)
It is indeed a privilege to be here in Jerusalem on my first visit as Secretary of Defense, which was made even more special as I had the opportunity to visit the World Holocaust Remembrance Center. I was especially moved by the stories of the victims and the survivors. And to the prime minister’s point, we must never forget their sacrifice, their heartache and their loss. And may their memory be a blessing and let it always be a solemn reminder of our duty to be ever vigilant against mass atrocities.

Lloyd Austin: (10:50)
Today, I was also grateful for the opportunity to meet with the prime minister to discuss a number of security issues that are important to our two countries. And I wanted to reaffirm that the administration, a strong commitment to Israel and to the Israeli people. And that’s why I thought it was important that we meet face to face and to express our earnest desire for close consultations with Israel, as we address shared challenges in the region. And I also want it to underscore my personal pledge to strengthening Israel security and ensuring Israel’s qualitative military edge.

Lloyd Austin: (11:35)
The close and strong ties that we enjoy with Israel are central to regional stability and security in the Middle East. And we both agree that we must continue to work closely together to enhance the US Israel strategic partnership. And so we discuss ways to deepen and expand our long-standing defense relationship in the face of regional threats and other security challenges. And I affirmed the department’s support for our ongoing diplomatic efforts to normalize relations between Israel and Arab and Muslim majority nations. Mr. Prime Minister, I’m grateful for today’s discussion to advance shared defense priorities and maintain close cooperation between the United States and Israel. And I am confident that together we can chart a path toward enduring peace in this region and advance an open and stable order now and in the years ahead.

Lloyd Austin: (12:39)
Again, thank you so much for a wonderful two days, and I look forward to seeing you again real soon in the future.