UN Secretary General COP26 Speech Transcript: “We Know What Must Be Done” 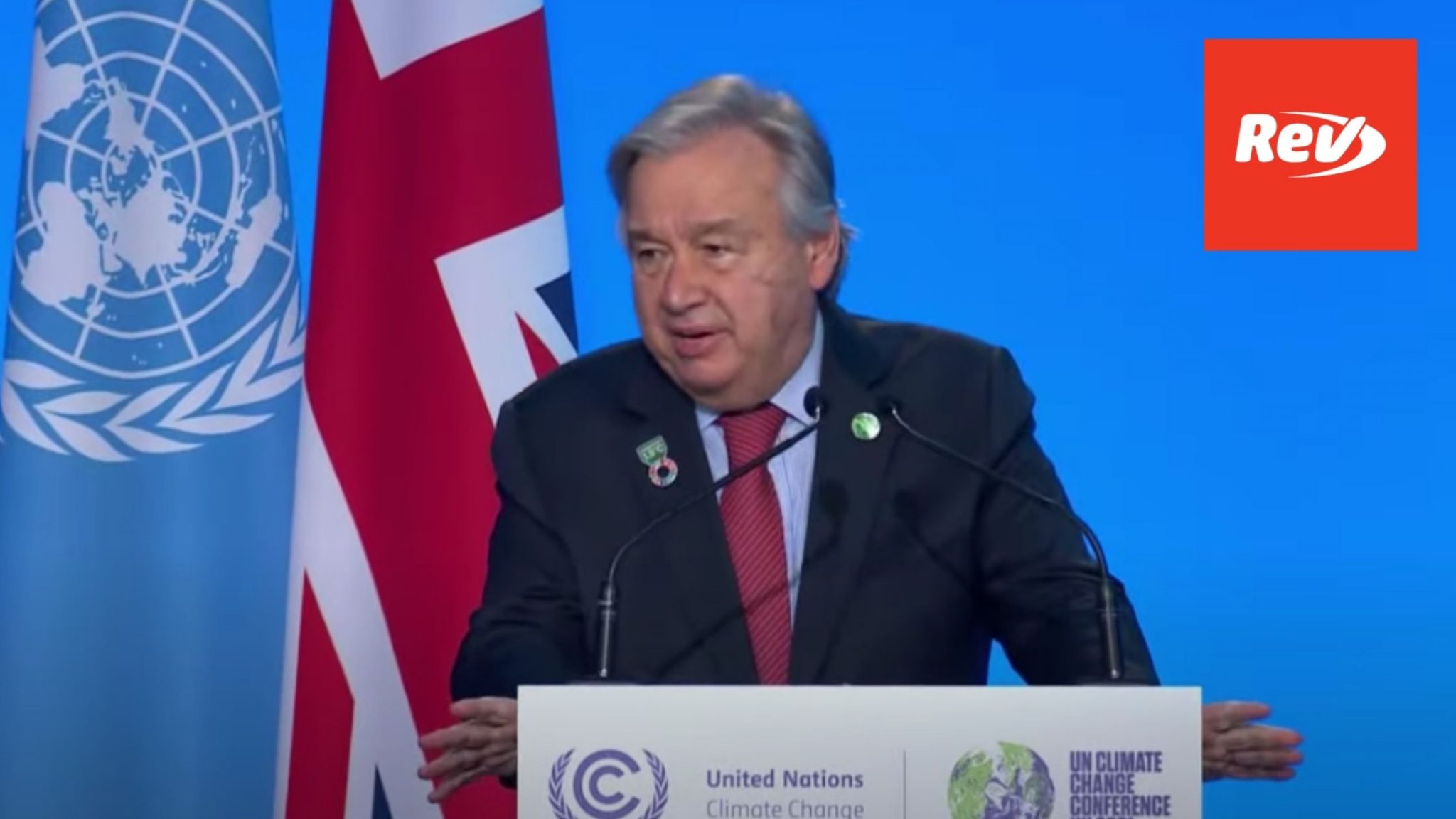 UN Secretary General António Guterres gave a speech at the COP26 climate summit in Glasgow on November 11, 2021. Read the transcript of the full speech here.

António Guterres: (00:01)
Colleagues, friends, this event, perhaps like no other at COP26, underscores a core truth, that climate action struggle requires all hands on deck. It is everyone’s responsibility and you are showing the way. I am inspired by the mobilization of civil society, by the moral voice of young people keeping our feet to the fire, by the dynamism and the example of Indigenous communities, by the tireless engagement of women’s groups, by the action of more and more cities around the world, by a growing consciousness as the private sector aligns balance sheets and investment decisions around net zero.

António Guterres: (00:51)
I thank the High-Level Climate Action Champions, Gonzalo Muñoz and Nigel Topping, and so many others for your efforts. You are indeed racing to a better world, and governments need to pick up the pace and show the necessary ambition on mitigation, adaptation, and finance in a balanced way. We cannot settle for the lowest common denominators. We know what must be done. Keeping the 1.5 goal within reach means reducing emissions globally by 45% by 2030, but the present set of nationally-determined contributions, even if fully implemented, would still increase emissions by 2030.

António Guterres: (01:39)
According to the latest joint analysis of the nationally-determined contributions by UNAP and UNFCCC, we remain on a catastrophic temperature rise track, well above two degrees Celsius. Net zero pledges require rapid sustained emissions cuts this second, and I welcome the recognition of this fact in yesterday’s US-China corporation agreement, that I can see that an important step in the right direction. But promises ring hollow when the fossil fuels industry still receives trillions in subsidies, as measured by the IMF, or when countries are still building coal plants, or when carbon is still without a price by starting markets and investor decisions. Every country, every city, every company, every financial institution must radically, credibly, and verifiably reduce their emissions and decarbonize their portfolios starting now.

António Guterres: (02:53)
Dear friends, while far from enough, we can take stock of progress. Last week, a number of countries committed to working collectively to halt and reverse forest loss and land degradation by 2030. Year two, we need meaningful concrete action and results in the 2020s. More than 1,000 cities around the world have committed to reach net zero by 2050 or earlier, sometimes far earlier. Our host city, Glasgow, has set a 2030 deadline. The Net Zero Asset Owners Alliance, the gold standard for credible commitment and transparent targets, is managing $10 trillion US dollars in assets and catalyzing change across industries. I encourage the much larger Glasgow finance alliance for net zero to follow the same path.

António Guterres: (03:46)
The global coal pipeline has decreased by 76% since 2015. The G20, including the three largest public financers, have committed to ending overseas coal finance. 28 new members joined the Powering Past Coal Alliance, raising the membership to 165 countries, cities, regions, and businesses. 44 countries and 32 companies and regions have committed at COP26 to transition from coal to clean power, and this will be an enormous task.

António Guterres: (04:23)
That is why I’ve been calling for the formation of coalitions of countries, international financial institutions, and private finance, as well as renewable energy companies to support this monumental shift and to organize coalitions in support of specific countries that need to speed their energy transition. Some certain member states and regional development banks have pledged the immediate support for the clean energy transition in countries, and I urge more financial institutions and investors to follow suit.

António Guterres: (04:57)
I welcome the partnership that will allow South Africa to rapidly decommission its coal plants while ensuring that workers and communities are not left behind. Indonesia and Vietnam have pledged to phase out coal by 2040, they will need support. We need similar coalitions to deliver resilient infrastructure and adaptation in countries on the front lines of the climate crisis, from small island developing states to the least developed countries.

António Guterres: (05:29)
Friends and colleagues, the announcements here in Glasgow are encouraging, but they are far from enough. The emissions gap remains a devastating threat. The finance and adaptation gap represent a glaring injustice for the developing worlds. We need even more ambition in future revised nationally-determined contributions and we need pledges to be implemented. We need commitments to turn concrete, we need actions to be verified, and we need to bridge the deep and real credibility gap.

António Guterres: (06:08)
As an engineer, I know that durable structures need solid foundations. We must be able to measure progress and to adjust when off track. We have a critical mass of global commitments to net zero from both governments and non-state actors. We must now zoom in on the quality and implementation of plans, on measuring and analyzing, on reporting transparency and accountability. That is why, beyond the mechanism already set out in the Paris Agreement, I’ve decided to establish a high-level expert group to propose clear standards to measure and analyze net zero commitments from non-state actors.

António Guterres: (06:49)
The high-level expert group will build on existing work and submit a series of recommendations to me during the course of next year. They will work in a transparent and inclusive manner, and I invite you all to cooperate fully in their establishment and then with them. We need action if commitments are to pass the credibility test. We need to hold each other accountable, governments, non-state actors and the civil society, because only together can we keep 1.5 degrees within reach and the equitable and resilient world we need.

António Guterres: (07:28)
I thank you for your commitment and for your dedication to this, that is the most important fight of our lives.