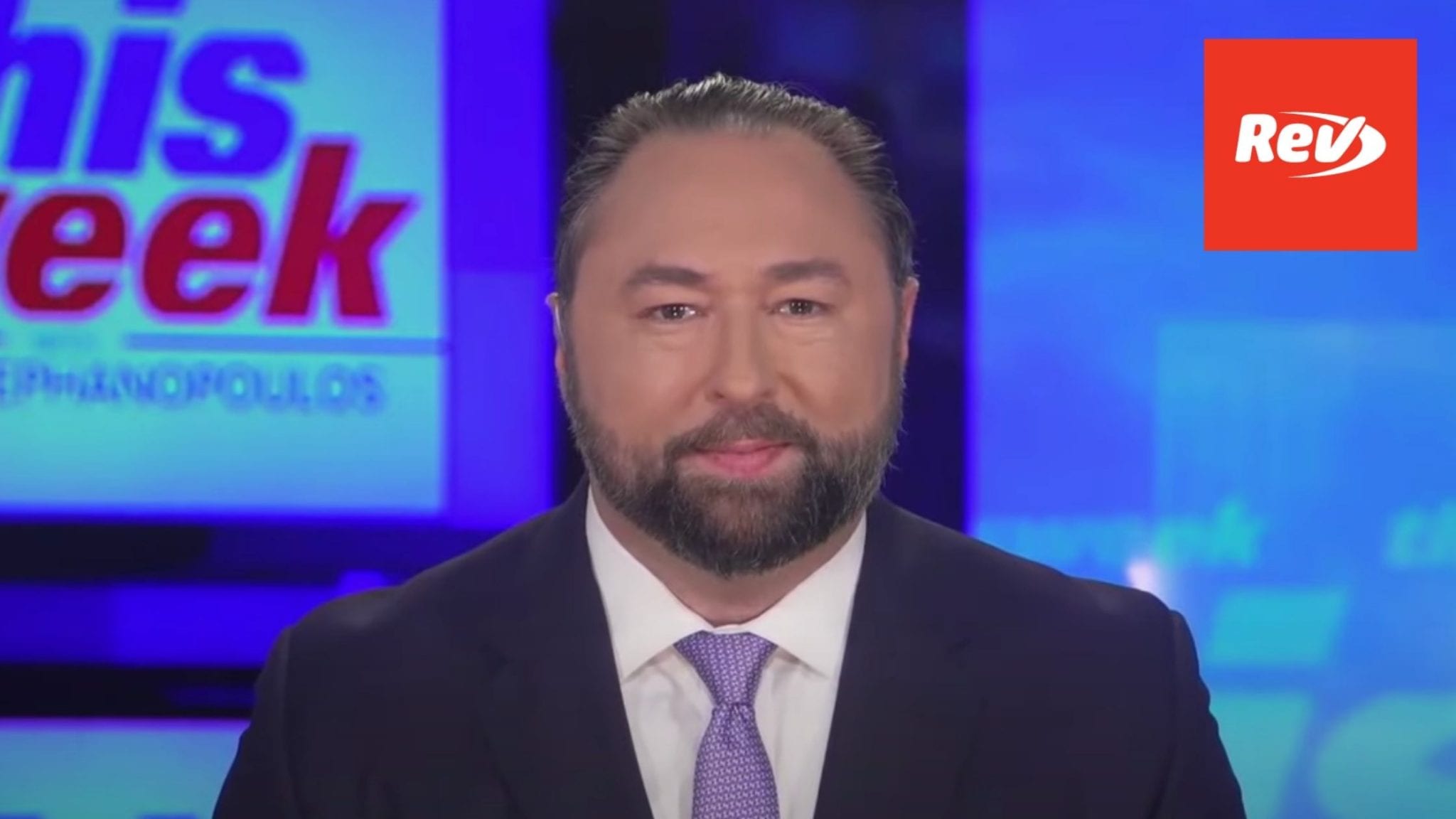 President Donald Trump’s senior campaign advisor Jason Miller was interviewed by George Stephanopoulos on November 1, saying “If you speak with many smart Democrats, they believe that Trump will be ahead on election night, probably getting 280 electoral [votes], somewhere in that range, and then they’re gonna try to steal it back after the election.” Read the full interview transcript here.

Donald Trump (video): (00:00)
You know, our doctors get more money. If somebody dies from COVID. You know that, right? I mean, our doctors are very smart people. So what they do is they say, “I’m sorry, but you know, everybody dies of COVID.” But in Germany and other places, if you have a heart attack or if you have cancer, you’re terminally ill, you catch COVID, they say, “You died of cancer. You died of a heart attack.” With us, when in doubt, choose COVID. It’s like $2,000 more. So you get more money. This could only happen to us.

George Stephanopoulus: (00:31)
President on the campaign trail on Friday. Let’s talk about that with Trump campaign senior advisor, Jason Miller. Jason, thank you for joining us this morning. The AMA responded to that immediately. The head of the AMA saying, “It was malicious, outrageous, and completely misguided for the president to suggest that doctors are inflating COVID deaths.” Why does the president repeatedly attack doctors, they’re working on the front lines, saying they’re inflating COVID numbers?

Jason Miller: (00:56)
Well, George, good morning, Sunday morning, where I would tell you that tens of thousands of people are waking up in Pittsburgh this morning and reading the Post-Gazette and seeing that they’ve endorsed a Republican for the first time since 1972. That’s president Trump for his reelection, so we’re excited about that. To your comment about the president yesterday on the campaign trail, I don’t think he was attacking anybody at all. I think he was talking about how most Americans want to safely and securely reopen the country, get back to work, get back to life as normal, defeat this virus and this is-

George Stephanopoulus: (01:22)
Jason, we all just saw it. He was talking about doctors inflating COVID deaths for money.

Jason Miller: (01:29)
George, I’m not going to get into the billing aspects of which there have been many reports on. There’ve been all sorts of independent things that are pointing to that. But the fact of the matter is people want to get their life back to normal. They’re tired of the lockdowns. You look at these Democrat-run states like Pennsylvania, Michigan, Wisconsin. We’re seeing this on the campaign trail with the rallies. People are tired of these lockdowns. They want to safely reopen.

George Stephanopoulus: (01:50)
So you’re repeating that. You believe that doctors are inflating COVID deaths for money?

George Stephanopoulus: (02:09)
Well, but the president is talking about doctors on the front lines inflating COVID deaths, which, as the head of the AMA said, “is malicious and completely misguided.” The president is also saying that we’re rounding the corner on the pandemic. And this comes as we’ve just come through our worst week yet on cases. Cases are rising in 42 states, test positivity rates are up, hospitalizations are up, deaths are climbing up. Why does the president continue to say we’re rounding the corner in the face of this surge?

Jason Miller: (02:52)
The leadership that President Trump has shown here on getting these therapeutics developed, the vaccines, COVID is no longer a death sentence for virtually everybody who gets it. We have made such miraculous advancements in such a short amount of time. That’s the difference between an operation warp speed and being locked in the basement.

George Stephanopoulus: (03:10)
We’re seeing cases surge across the country, as I just said. I just ran through those statistics. And here is Dr. Fauci’s take on those statistics in the Washington Post this morning. Quote, “We’re in for a whole lot of hurt. It’s not a good situation. All the stars are aligned in the wrong place as you go into the fall and winter season. You could not possibly be positioned more poorly.” He’s the top infectious disease specialist in the country right now, and the White House response to that was to attack Dr. Fauci. Why?

Jason Miller: (03:38)
George, Dr. Fauci isn’t on the ballot on Tuesday. This is about President Trump and Joe Biden. And the thing that I would point out here that I think is really going to backfire on Democrats and many in the media is the Democrats have spent so many months telling folks that it’s not safe to go out and vote in person on Tuesday. There’s been so much media pressure effectively putting out scare tactics to keep folks away.

Jason Miller: (03:59)
Well guess what? President Trump’s supporters are going to show up on Tuesday. Nothing is going to stop them. This is really going to be a vote suppression effort against Democratic voters, and I think Democrats are going to look in the rear view mirror and say, “This is probably what costs us the election.”

George Stephanopoulus: (04:13)
Vote suppression. 92 million Americans, more than 92 million Americans have already voted. That’s well over half of the number that voted in 2016, and it’s going to continue through Tuesday. So given all that, what is your clearest path to 270 right now?

Jason Miller: (04:29)
Well, we feel very good. We think that President Trump is going to hold all of the Sunbelt states that he won previously. And as you look to the upper Midwest, Joe Biden has to stop President Trump in four out of four states, Pennsylvania, Michigan, Wisconsin, Minnesota. If President Trump wins just one of those in three of the four he won last time, he will be a reelected president.

Jason Miller: (04:51)
There’s a really important point here, George, that I want to make, is that the entire electorate has shifted. The coalitions are different this go around. The fact that Joe Biden had to go back to Minnesota, a state that Republicans haven’t won since 1972, just the other day, shows how they’re worried about states shifting. President Trump is going to get well over 10% of the black vote. I think he’ll get over 20% of African American men.

Jason Miller: (05:14)
President Trump will probably get 40% of the Latino vote. The entire demographic shift within these parties, it’s a different world now, George, and that’s why we’re trying to turn out our supporters. We feel good about it. And one final thing, George. If you speak with many smart Democrats, they believe that President Trump will be ahead on election night, probably getting 280 electoral, somewhere in that range.

Jason Miller: (05:34)
And then they’re going to try to steal it back after the election. We believe that we will be over 290 electoral votes on election night. So no matter what they try to do, what kind of hi-jinks or lawsuits or whatever kind of nonsense, they try to pull off, we’re still going to have enough electoral votes to get President Trump reelected.

George Stephanopoulus: (05:51)
So basically, you’re saying that the president needs to have a clean sweep of all the states in the Sunbelt that he won back in 2016, Arizona, Georgia, Florida, Texas, North Carolina?

Jason Miller: (06:25)
So we have multiple pathways. We feel very good about where we’re going. And the fact of the matter is, is that Joe Biden does not excite his base. So when you take the lack of enthusiasm for Joe Biden and the media and Democratic suppression for their voters on election day, we think that our turnout will deliver President Trump a victory. And the one thing, George, I got to tell you, we learned this in 2016, Donald J. Trump is a closer. Nobody knows how to close out a presidential race like he does.

George Stephanopoulus: (06:53)
Certainly happened in 2016. Jason Miller, thanks very much. Hi everyone. George Stephanopoulos here. Thanks for checking out the ABC News YouTube channel. If you’d like to get more videos, show highlights, and watch live event coverage, click on the right over here to subscribe to our channel. And don’t forget to download the ABC News app for breaking news alerts. Thanks for watching.