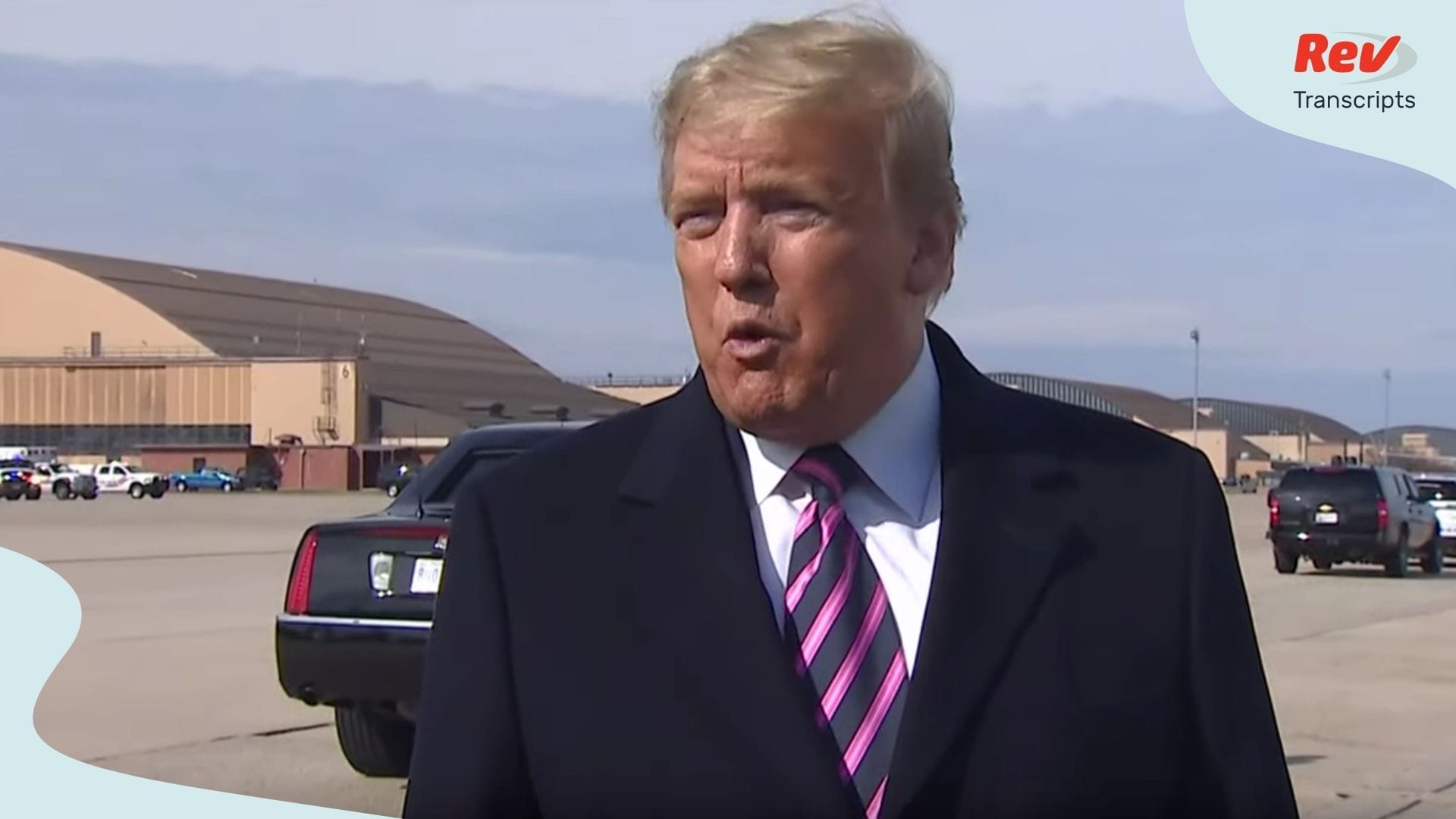 On Tuesday, February 18, 2020, Donald Trump went on a clemency spree of pardons and commutes. He commuted the 14-year prison sentence of former Illinois Governor Rod Blagojevich and pardoned former NYPD commissioner Bernie Kerik, among a long list of others. Read the full transcript of Trump’s statements to the press before boarding Air Force One.

Donald J Trump: (00:00)
Yes, we have commuted the sentence of Rod Blagojevich. He’s served eight years in jail. That’s a long time. And I watched his wife on television. I don’t know him very well. I’ve met him a couple of times. He was on for a short while of The Apprentice years ago, seemed like a very nice person. Don’t know him, but he served eight years in jail. There’s a long time to go. Many people disagree with the sentence. He’s a Democrat, he’s not a Republican.

Donald J Trump: (00:32)
It was a prosecution by the same people, Comey, Fitzpatrick, the same group. Very far from his children. They’re growing older. They’re going to high school now and they rarely get to see their father outside of an orange uniform. I saw that, and I did commute his sentence. So he’ll be able to go back home with his family after serving eight years in jail.

Donald J Trump: (00:56)
That was a tremendously powerful, ridiculous sentence in my opinion.

Reporter 1: (01:03)
Do you still have confidence in your Attorney General? First…

Donald J Trump: (01:05)
I have total confidence in my Attorney General.

Reporter 1: (01:07)
Do you agree with his statement that you should stop tweeting about Justice Department issues?

Donald J Trump: (01:12)
Well people like that. But everybody has the right to speak their mind. And I use social media. I guess I use it well because here I am. I’m here.

Donald J Trump: (01:43)
But I think he’s doing an excellent job. He’s a strong guy. I never spoke to him about the Roger Stone situation. Roger Stone, just so you know, never worked. He didn’t work for my campaign. There might’ve been a time way early, long before I announced, where he was somehow involved a little bit. But he was not involved in our campaign at all. And I think it was a very, very rough thing that happened to Roger Stone.

Donald J Trump: (02:37)
So my social media is very powerful. I guess Mark Zuckerberg just recently said Trump is number one in the world on social media, which is a very nice statement, I guess. Certainly it’s something you could be at least a little bit proud of. But it means I have a voice, so I’m able to fight the fake news.

Reporter 1: (02:56)
Have you [inaudible 00:02:57] to resign over your tweets, and then also he said that your comments on Twitter are making it impossible to do his job. Are you making his job impossible?

Donald J Trump: (04:51)
I haven’t given it any thought. In the meantime, he’s going through a process. But I think he’s been treated very unfairly. Yes?

Reporter 3: (05:04)
Are you not concerned about national security on that?

Donald J Trump: (05:22)
But I will say that we’re not going to be sacrificing our companies for all of the growth and everything else that they’re ready. They’re exploding. They’re doing so well. By using a fake term of national security. It’s got to be real national security. And I think people were getting carried away with it.

Donald J Trump: (05:40)
So I want our companies to be treated… I want our companies to be allowed to do business. I mean, things are put on my desk that have nothing to do with national security, including with chip makers and various others. So we’re going to give it up. And what will happen? They’ll make those chips in a different country, or they’ll make them in China or someplace else. So national security is very important. I’ve been very tough on HUAWEI, but that doesn’t mean we have to be tough on everybody that does something. We want to be able to sell all of this incredible technology. We’re number one in the world. We want to be able to sell to other countries.

Donald J Trump: (07:09)
I saw that Senator Murphy met with the Iranians. Is that a fact? I just saw that other way over. Is there anything that I should know? Because that sounds like to me a violation of the Logan Act.

Donald J Trump: (07:24)
What happened with that? Did you read about or hear about Senator Murphy met with the Iranians?

Speaker 8: (07:35)
As for Venezuela, sir, do you think Guaido is still the guy to get Maduro out of office?

Reporter 1: (07:53)
I know you were asked specifically about Roger Stone, but are you ruling out pardons for Stone, for your former campaign chairman Paul Manafort, and for Michael Flynn, for example?

Donald J Trump: (08:00)
I’m not even thinking about that. There’s a process that people are going through. These are unrelated situations where people have done a great job with very, very strong recommendations. But we haven’t thought about that yet. Right now there’s a process.

Reporter 1: (08:45)
Do you think Roger Stone deserves any prison time?

Speaker 8: (08:57)
Are you concerned about all-out war breaking out between Turkey and Syria?

Donald J Trump: (09:13)
But the fact is that he’s a fighting on Idlib. He doesn’t want people to be killed by the thousands and hundreds of thousands. And he called me about that and other reasons. But we spoke about Idlib, and we’re working together on seeing what can be done.

Speaker 9: (09:38)
I’m Ms. Suane, can you talk a little bit about these coming three days, and also why you wanted to fly back to Las Vegas every night to spend the night there?

Donald J Trump: (09:48)
Well, I don’t know exactly the schedule, because I don’t set the schedule.

Reporter 3: (10:09)
President, as you saw, Michael Bloomberg made the it to the Democratic debate stage tomorrow night. Do you have any advice for him as he [inaudible 00:10:15] today?

Donald J Trump: (10:16)
No, he doesn’t need that kind of advice. He’s been doing it for a long time. It just seems unfair what’s happening to Bernie Sanders, to be honest with you. I watched it happen four years ago. And always be careful what you wish for, and I’m not wishing for anything. Whoever it is, I’ll be very happy.

Donald J Trump: (10:33)
But it seems that Bernie Sanders and that whole big section of the Democratic Party, or as I call it, the Democrat Party, which is really the correct name. It seems they’re being taken advantage of like they were four years ago to me.

Speaker 7: (10:47)
What’s the campaign strategy for being in Nevada while the Democrats are focusing on the caucuses there?

Donald J Trump: (10:52)
Well I’ll be making a speech in Nevada, and that will be probably the day before, I guess, as they have it arranged. It seems to be pretty effective. We got more votes than any incumbent president in history in Iowa and in New Hampshire as you saw. And in that case, I went just before the day before, and I went the day before in both cases, Iowa and New Hampshire. So it seems to be effective. I’ll be going to South Carolina, they’re working that out now, probably the day before. But you know, look, we have a big voice and we might as well use it.

Speaker 5: (11:29)
Mr. President, are you still satisfied with how President Xi is handling the coronavirus?

Donald J Trump: (11:34)
I think President Xi is working very hard. As you know, I spoke with him recently. He’s working really hard. It’s a tough problem. I think he’s going to do… Look, I’ve seen them build hospitals in a short period of time. I really believe he wants to get that done, and he wants to get it done fast. Yes, I think he’s doing it very professionally. We’re also working with him and helping him as of the last few days, as you know.

Speaker 5: (12:01)
Some people don’t seem to trust the data coming out of China. Are you worried about that?

Donald J Trump: (12:06)
Look, I know that President Xi loves the people of China. He loves his country, and he’s doing a very good job with a very, very tough situation.

Speaker 7: (12:20)
Mr. President, Senator Graham is traveling with you. Do you want to talk to him about the Judiciary Committee doing any investigations? [crosstalk 00:12:25].

Donald J Trump: (12:25)
If it comes up, yes, but we’ll see what happens with that. That’s really up to Senator Graham. And he is traveling with me.

Donald J Trump: (12:34)
Well, we can have a trade deal with India, but I’m really saving the big deal for later on. We’re doing a very big trade deal with India. We’ll have it. I don’t know if it’ll be done before the election, but we’ll have a very big deal with India. We’re not treated very well by India, but I happened to like Prime Minister Modi a lot. And he told me we’ll have 7 million people between the airport and the event. And the stadium, I understand, is sort of semi under construction, but it’s going to be the largest stadium in the world. So it’s going to be very exciting. But he says between the stadium and the airport, we’ll have about 7 million people. So it’s going to be very exciting. I hope you all enjoy it.

Donald J Trump: (14:04)
We know a lot. In fact, when I want to get something out to the press, I tell certain people and it’s amazing. It gets out there. But so far I’m leaving it that way. I’ll see you later. Thank you. See you on the plane.