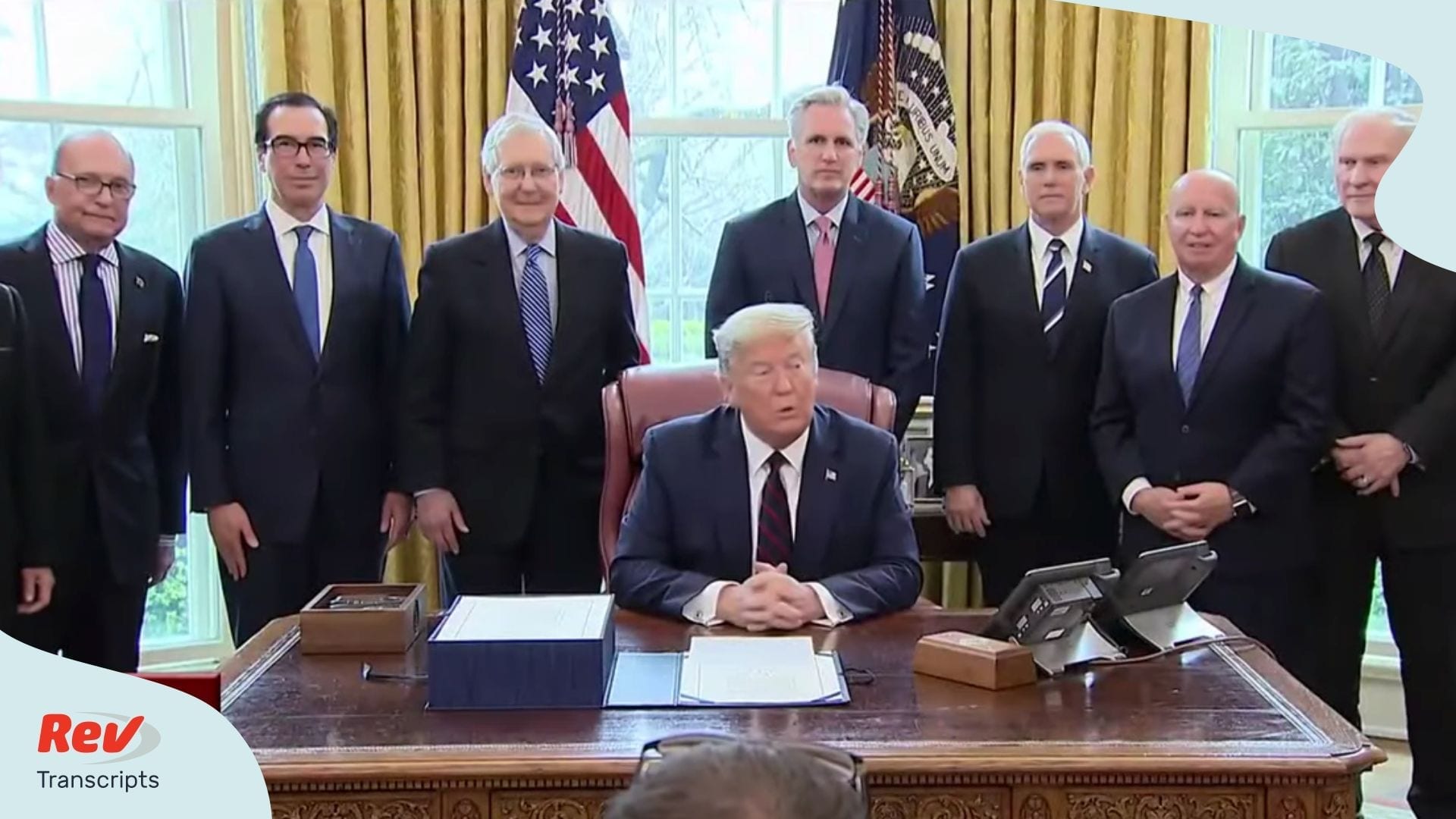 Donald Trump gave a speech before signing the largest stimulus bill in the history of America into law to help people & businesses affected by coronavirus. Read the full transcript of his announcement of the signing here.

Donald Trump: (00:00)
Well, thank you all very much. It’s a very important day. I will sign the single biggest economic relief package in American history, and I must say, or any other package, by the way. It’s twice as large as any relief ever signed. It’s a 2.2 billion, but it actually goes up to 6.2 potentially billion dollars, trillion dollars. So you’re talking about a $6.2 trillion bill, nothing like that. And this will deliver urgently needed relief to our nation’s families, workers and businesses. And that’s what this is all about. And they’d got a 96 to nothing. And I don’t know what was the number in Congress?

Donald Trump: (00:49)
So that’s fantastic. But I want to thank Republicans and Democrats for coming together, setting aside their differences and putting America first. This legislation provides for direct payments to individuals and unprecedented support to small businesses. We’re going to keep our small businesses strong and our big businesses strong, and that’s keeping our country strong and our jobs string. This historic bill includes the following:

Donald Trump: (01:14)
$300 billion in direct cash payments will be available to every American citizen earning less than $99,000 per year. $3,400 for a typical family of four. So family of four $3,400. And then $350 billion in job retention loans for small businesses with loan forgiveness available for businesses that continue paying their workers. The workers get paid. Approximately $250 billion in expanded unemployment benefits. The average worker who has lost his or her job will receive 100% of their salary for up to four full months. So things like this have never happened in our country. $500 billion in support for hard-hit industries with a ban on corporate stock buybacks. We don’t let them buy back the stock. We don’t let that happen. And tough limits on executive compensation over $100 billion to support our heroic doctors, nurses, and hospitals.

Donald Trump: (02:20)
And you see what’s happening. And I want to thank, while we’re here also the incredible job that’s done by the Army Corps of Engineers and by FEMA. It’s been incredible. They did four hospitals in two days or three days in New York and they’re like incredible structures. What a job they’ve been doing and they’re doing them all over the country. $45 billion for the disaster relief fund supporting our state, local and tribal leaders. $27 billion for the development of vaccines, therapies and other public health response efforts, including $16 billion to build up the strategic national stockpile with critical stockpiles. And I’m going to, we have a tremendous supplies coming into the stockpile and you’ll be seeing that and hearing about it a little bit because we’re doing a news conference at 5:30 on what’s happening. We’ve had tremendous results on the respirators. We’ve had great results on just about everything we’re talking about.

Donald Trump: (03:23)
Boeing just announced that they’re going to be making the plastic face shields, the actual shields, which are hard to come by and they’re going to be making them by the thousands a week. And the ventilators, which is probably the most difficult because it’s like building a car. We will be announcing thousands are going to be built and we have a month of contract and we have fast deliveries. As you know, we delivered thousands to New York and unfortunately they were delivered to a warehouse, which was good. Unfortunately they didn’t take them, but now they’re taking them. New York is now taking them and redistributing around the areas that they need. So you have also $3.5 billion to states to expand childcare benefits for healthcare workers, first responders and others on the front lines of this crisis and $1 billion for securing supplies under the defense protection act.

Donald Trump: (04:18)
And as you know, I’ve enacted the act and we’ve used it three or four times. I pulled it back three times because the companies came through in the end, they didn’t need the act. It’s been great leverage. I have instituted that against General Electric. We thought we had a deal for 40,000 ventilators and all of a sudden the 40,000 came down to 6,000 and then they talked about a higher price than we were discussing. So I didn’t like it. So we did activate it with respect to General Motors and hopefully maybe we won’t even need the full activation. We’ll find out, but we need the ventilators. I said, hello today. I called him a wonderful guy, Boris Johnson, as you know, he tested positive and before he even said hello, he said, we need ventilators. I said, wow, that’s a big statement and hopefully he’s going to be in good shape.

Donald Trump: (05:13)
I just spoke to Angela Merkel and she’s quarantined also. She is right now for a period of two weeks being forced to stay in her house. So this is just an incredible situation. Last night, I spoke to President Xi, we talked about the experience that they had in China and all of the things that have taken place and we learned a lot. They’ve had a very tough experience and they’re doing well and he’s doing well. President Xi is doing very well but we learned a lot and we have great communication together. We’re going to be sending great data from China, things have happened that they see that they’ve had an early experience and we’re getting all of that information. Much of it was sent yesterday and sent to our scientists to study. So we’ll have more on that also.

Donald Trump: (06:08)
We’ll be discussing that at 5:30 I just want to thank the people behind me. They’ve been incredible friends. They’ve been warriors. There’s nobody tougher or smarter than the people standing alongside of me. And I think I want to start off by asking Mitch and then Kevin to speak and then we’re going to go through a few of the folks in the room if they’d like to say something. But Mitch, I’d love you to say a few words because this man worked 24 hours a day for a long time. This is the result. It’s the biggest ever, ever approved in Congress. $6.2 trillion. So, we used to get used to the billion. It used to be million than it was billion. Now it’s trillion and it’s going to go a long way. It’s going to make a lot of people very happy. Mitch McConnell, please.