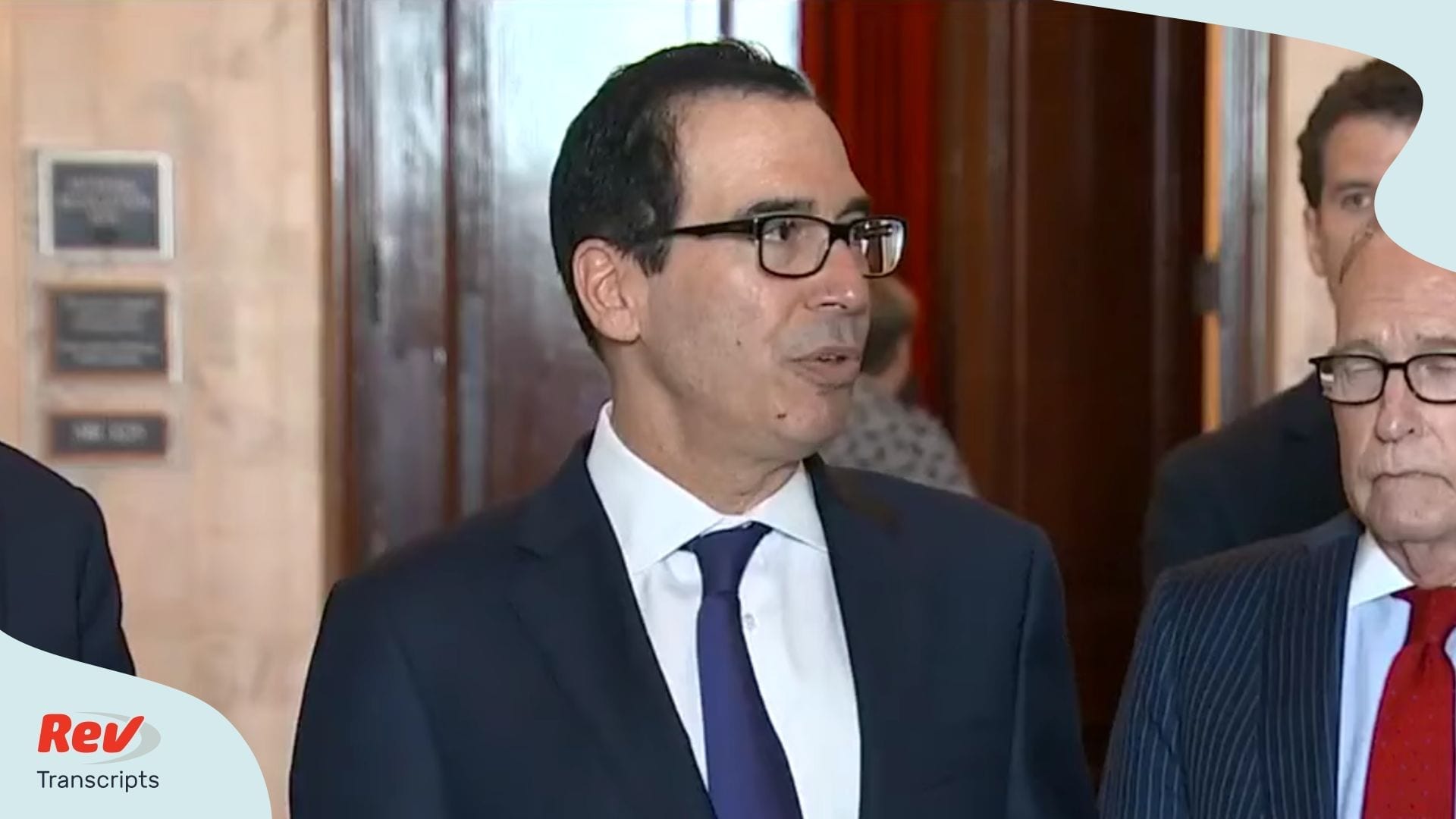 Treasury Secretary Steve Mnuchin talked about an almost $1 trillion stimulus package with reporters today, after a meeting with Republican lawmakers. It’s being reported that he warned the lawmakers of unemployment rates as high as 20% if they don’t support the stimulus.

Secretary Mnuchin: (00:00)
… serving Federal Jay Powell’s request to activate 13(3). This is a very important feature. The fed will be setting up a special purpose vehicle that will purchase A-1/P-1 commercial paper. The treasury will be investing $10 billion of equity into that vehicle. That is a trillion dollar market. So, we have now created stability for four businesses that need to rollover their commercial paper and for Americans that have money in money market funds that had commercial paper in them, we’ve created stability and liquidity in that market. I think it’s unlikely that the fed people need to take up all of that, but that’s $1 trillion of liquidity if needed. The second thing I’d say is we clarified the IRS rules for deferral of tax payments. Again, I encourage people to file an April 15th because many people will have refunds. If you don’t, you and you can request an extension, but if you file and you owe payment, individuals and pass-throughs up to a million dollars, you can defer that tax free, interest free, penalty free and corporations up to $10 million.

Secretary Mnuchin: (01:12)
Now we just finished discussions at the President’s request with the Republicans. I know there’s been some rumors of the number. It is a big number. This is a very unique situation in this economy. We’ve put a proposal on the table that would eject $1 trillion into the economy that is on top of the 300 billion from the IRS deferrals. Now let me just say this is a combination of loans. This is a combination of direct checks to individuals. This is a combination of creating liquidity for small businesses. So we look forward to working with the Senate. We’re very pleased to hear the leaders say that they’re staying here. Their priority is working on what we call Bill number three. We had very productive discussions that the President wants to emphasize. This is a situation where we have requested that many people stay home so we don’t spread this disease. This is not like a normal economic situation. The government has requested that parts of this economy shut down and the President is determined. You can think of this as business interruption money. The President is determined. We will put money back into this economy to protect hardworking Americans and small businesses.

Speaker 2: (02:30)
Secretary [crosstalk 00:02:31]. Do you want the Senate to approve the House bill unchanged, number one. And number two, shouldn’t Congress also be concerned about rising deficits as you [inaudible 00:02:41] proposing a $1 trillion package here that Congress should-

Secretary Mnuchin: (02:45)
I think Congress right now should be concerned about the American workers and small business. Interest rates are incredibly low, so there’s very little cost of borrowing this money. And as I’ve said in different times, we’ll fix the deficit. This is not the time to worry about it. This is the time that hardworking Americans are impacted by government decisions, that’s when the government has to step up to put money into the economy.

Secretary Mnuchin: (03:15)
We’re having conversations with them on that and that’s an ongoing discussion.

Secretary Mnuchin: (03:22)
Sure. I’ve had conversations around the clock with all the airlines’ CEOs. I haven’t had cargo, but we’ve had conversations. We obviously have a situation where there’s very little traffic. We want to maintain that although we’ve told people not essential travel they shouldn’t do, but essential travel, we want to have airlines that operate maybe on a more limited basis. Airlines have a short term liquidity issue and absolutely, that’s something we talked about today. I’ve also spoken to the speaker about that, so we are absolutely part of this, airlines, hotel travel, other areas we’re talking about dealing with that.

Speaker 4: (04:01)
Secretary Mnuchin, is there any plans for a global economic stimulus? Are you in touch with other world leaders about our global stimulus [inaudible 00:04:07]?

Secretary Mnuchin: (04:07)
Sure did. The president’s had a G7 leaders conference call yesterday. Director Kudlow was a critical part of putting that together. There was a statement, one of the things they called for was further coordination with central bankers and finance ministers. We’ll be having weekly calls of the G7 finance ministers and central bankers and I think you know the fed has been in ongoing discussions with their counterparts.

Speaker 5: (04:38)
Can you talk about the bills, the direct checks that you guys are proposing for Americans?

Secretary Mnuchin: (04:38)
Again, I don’t want to go into the specifics, we’re going to work with Congress on this, but the President wants to put money in the economy now. This is where, if there are people and small businesses that can’t make payroll because their business has ceased to exist, we’ve told people in restaurants, “Don’t go into restaurants.” We want to make sure that those business owners have money to pay their employees. We’re not going to put money in those business owners just for the sake of them keeping it, but we’re going to help them with liquidity to meet their payroll. Thank you, everybody.