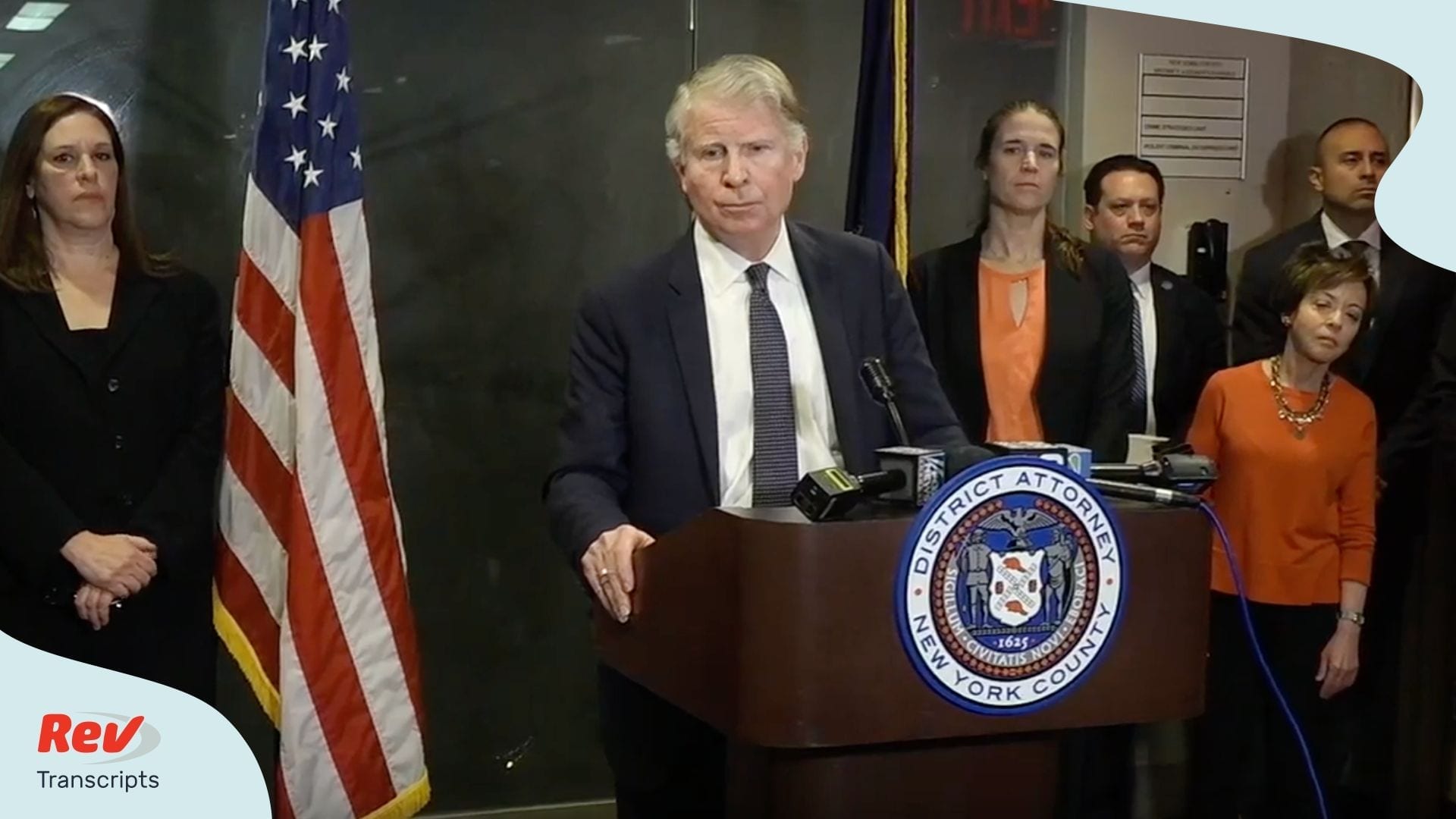 Read the transcript of the press conference by Manhattan District Attorney Cyrus Vance III. He discusses the guilty verdict for former movie producer Harvey Weinstein, who was found guilty of rape.

DA Cyrus Vance: (00:21)
Okay, good. Good morning, welcome. Thank you for being here. Dawn Dunning, Miriam Haley, Jessica Mann, Annabella Sciorra, Tarale Wulff, Lauren Young, Megan Hast, Joan Illuzzi-Orbon. Eight women who have changed the course of history in the fight against sexual violence. These are eight women, who pulled our justice system into the 21st century by declaring that rape is rape and sexual assault is sexual assault, no matter what. Rape is rape, whether it’s committed by a stranger in a dark alley or by an intimate partner in a working relationship. It’s rape whether it’s committed by an indigent person or a man of immense power, prestige, and privilege. Rape is rape whether the survivor reports within an hour, within a year, or perhaps never. It’s rape despite the complicated dynamics of power and consent after an assault. It’s rape even if there is no physical evidence and even if it happened a long time ago.

DA Cyrus Vance: (01:55)
This is the new landscape for survivors of sexual assault in America, I believe. And this is a new day. It’s a new day because Harvey Weinstein has finally been held accountable for crimes he committed. The women who came forward courageously and at great risk made that happen. Weinstein is a vicious, serial sexual predator who used his power to threaten, rape, assault, trick, humiliate, and silence his victims. He has been found guilty of criminal sexual act in the first degree and will face on that count a state prison sentence of no less than five years and up to 25 years. To the jurors, I want to thank the jurors for their service and careful attention. Their verdict turned the page in our justice system on men like Harvey Weinstein. I want to say thank you to the assistant district attorneys, paralegals, and analysts who worked on this case. Including Maxine Rosenthal, Kevin Wilson, Shannon Goldberg, Carey Dunne, John Irwin, Alyssa Marino, Andy Clark, Danny Mahalia Cruz, Stephanie Latell, and Emily Hogan.

DA Cyrus Vance: (03:16)
And especially to Harriet Galvin, Megan Hast, and Joan Illuzi-Orbon. Who conducted a terribly difficult and meticulous investigation. And performed masterly a trial under the brightest of spotlights. And finally to the survivors of Harvey Weinstein. I owe and we all owe an immense debt to you who had the courage beyond measure to speak your story to the world, to this courtroom, at great personal risk and in great personal pain. To those of us who were privileged to be in the courtroom when they testified, you know what I mean. These survivors weren’t just brave, they were heroic.

DA Cyrus Vance: (04:10)
Words can’t describe adequately the sacrifices the survivors made to pursue justice. Weinstein with his manipulation, his resources, his attorneys, his publicists and his spies did everything he could to silence the survivors. But they refused to be silent. They spoke from their hearts and they were heard. They were heard by Weinstein’s other survivors and by sexual predators all over the world. They sacrificed their privacy and self protection, knowing better than anyone the extent of Weinstein’s power, manipulation, retribution and abuse. To them I would say, “You broke silence to hold him accountable.” And believe me when I say that because you have done so, a generation of sexual assault survivors and all of us heard your every word. Thank you. I’ll take a couple of questions.

Speaker 5: (05:09)
Sir, are you fully satisfied with this verdict or do you feel in some way you came up short? You just mentioned it could be as little as five years.

DA Cyrus Vance: (05:17)
Well, I’m certainly not dissatisfied by the verdict. I think this was a very difficult case, a very challenging case. And a case that really moved our understanding of what sexual assault is, where it can occur. Shattered myths that I think have been part of the criminal justice system for a long time. So I believe a B felony conviction with a maximum of up to 25 years, it is not the top counts in the indictment, but by no means am I disappointed with the jury’s unanimous statement that Harvey Weinstein is guilty of sexual assault and rape. Any other questions?

Speaker 6: (06:01)
Some of the women like Annabella Sciorra and Jessica Mann, it appears the jury repudiated their testimony. Do you have any concerns that women are going to have to endure such terrible cross examination that they endured at the hands of Weinstein’s lawyers?

DA Cyrus Vance: (06:16)
Well, I think with regard to Jessica Mann, Harvey Weinstein was convicted for rape in the third degree.

DA Cyrus Vance: (06:24)
Ms. Sciorra took great risks and was in substantial pain testifying about that happened to her many years ago. I can’t look behind the jury’s verdict or how they arrived at that. We have to respect that process. But by no means is it a statement against Ms. Sciorra or against anything that she said in court. Jurors find a way through to a solution that they believe adequately brings them all together with the unanimous verdict. In terms of the cross-examination, I think we saw cross-examination, the kinds that we’ve seen for years and years and years. I hope that with this verdict it will become more obvious that those kinds of attacks on the survivors and victims when they’re on the stand, making it seem like it’s all their fault, will be realized as legal attacks that just simply are no longer going to work in this day and age. And it’s time that lawyers stop using them and continuing the myths that I think the jury verdict must’ve today.

DA Cyrus Vance: (07:42)
Well first of all, I would say that, Dean … It was Dean right? With this verdict, I hope that survivors will see that in this justice system, prosecutors, judges, and juries will believe them. Even when the facts are not simple and even when the dynamics of the relationships between the survivors and the abuser are complicated. So I think, Dean, the message is, “This is a big day. This is a new day.” And I hope women will understand the significance of the jury verdict today. In terms of the time it takes to report a sexual assault, Dean, we cannot put ourselves in the shoes of a victim of sexual assault to understand what is going through his or her mind. You heard on the witness stand the reasons why a number of these women, survivors, did not come forward with. They weren’t deathly afraid of Harvey Weinstein for one thing. And that he would ruin their career.

DA Cyrus Vance: (08:45)
So there’s all sorts of dynamics that make survivors of sexual assault not comfortable to come forward. However, those stories are now part of what we all now understand better after this trial, that survivors have to go through. So Dean, I thin, my hope is with this verdict, survivors of sexual assault, whether it’s of Mr. Weinstein or whether it’s someone else, will come forward. And our office and others like our office will, I hope, be there to listen to them and to help them move forward.