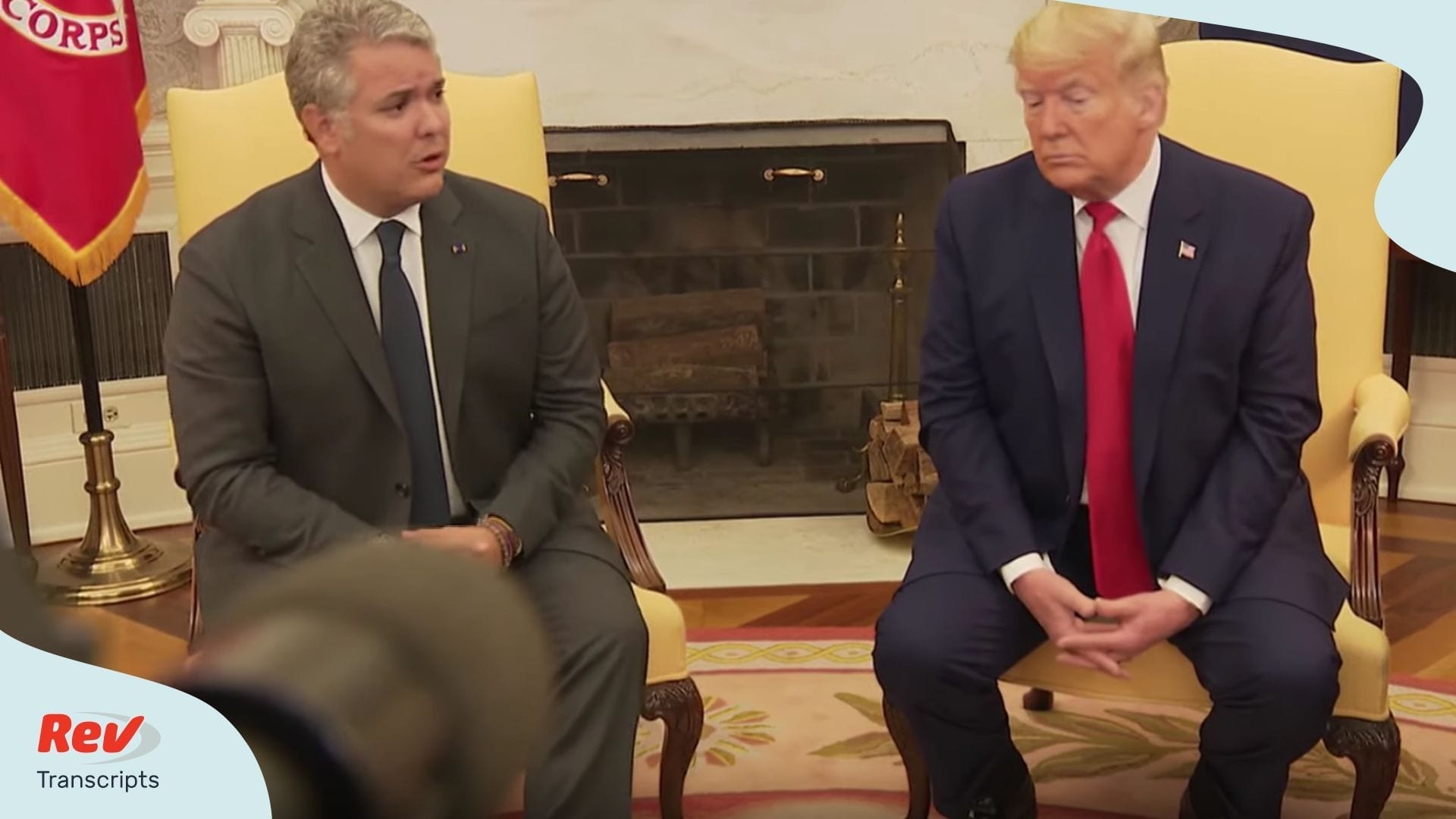 Donald Trump held a meeting in front of the press with Colombia president Iván Duque Márquez. He spoke about the coronavirus for part of the meeting. Read the transcript right here.

President Trump: (00:00)
We have a rally scheduled and that should be I think terrific. It’s thousands of people who are already out there waiting, so we’re going to have hopefully a good time. We’re going to make a lot of different predictions tonight also.

President Trump: (00:14)
Working very hard with the CDC, with everybody on a subject that has become a very big subject. Our country is doing very well. Our professionals are doing really an incredible job. We’re also working with other countries to help them because they really have a fear of the unknown. We’re working very much with a lot of other countries including Columbia, but we’re working with a lot of other countries on helping them with respect to this problem. And again, we’re doing very well. Some additional people were reported. They’re in good shape, but we have some additional people that were reported and not very many in the United States, so we will be having a news conference later.

President Trump: (01:00)
I’m also meeting with the pharmaceutical companies later on this afternoon. We have a big meeting with the biggest companies, really the most powerful companies, hopefully the smartest companies anywhere in the world. When it comes to drugs and vaccines, because we’re talking about a vaccine, maybe a cure. It’s possible. So we’ll see about that. But we’re talking about a vaccine and they’re moving along very quickly. All of the pharmaceutical companies are moving along very quickly, but you’ll be invited to a part of that meeting. So we’ll see you a little bit later on in the afternoon and thank you all very much. Thank you.

President Trump: (01:39)
Well, you’re going to have to spray. If you don’t spray, you’re not going to get rid of them. So you have to spray with regard to the drugs in Colombia. Yeah.

Speaker 3: (01:46)
Let me… something that is very important and we have to combine all the elements that we have. Obviously, precision spraying but also are record heights that we reach in 2019 on manual eradication and also dismantling the drug cartels. So we have to work on all the elements and we have to be very strong against that crime. That crime is hurting our people and it’s hurting people everywhere and we need to work jointly in that effort as we have been doing so far.

Speaker 3: (02:33)
Mr. President, if I may add something, it’s very important that we are stronger on sanctions against the dictatorship in Venezuela. Venezuela is running out of [inaudible 00:02:43]. They have destroyed all their healthcare system, so we have to in this year work together, join me. So there’s a political and democratic transition that is effective in Venezuela.

President Trump: (03:00)
We said that before and that was about drug pricing. This meeting was set up a long time ago with the pharmaceutical companies and that meeting was about drug pricing because we brought the numbers down last year, first time in 51 years that the drug prices prescription have come down. And I have a meeting scheduled on drug prices, but now we’re going to make another subject and that’ll be probably the first subject and that is to do with the vaccine and how are they doing?

President Trump: (03:26)
That’s what we’re going to find out. We’ll know that. Well, we’ve asked them to accelerate whatever they’re doing in terms of a vaccine. Absolutely.

Speaker 6: (03:34)
Mr. President, is it safe or appropriate to be holding rallies during a public health crisis like this?

President Trump: (03:38)
These were set up a long time ago and others are. I mean, you could ask that to the Democrats because they are having a lot of rallies. They’re all having rallies. That’s what they’re doing. They’re campaigning.

Speaker 7: (03:56)
Mr. President, do think the interactive talks are going to actually start as planned-

President Trump: (04:02)
Well, we’re going to find out, but we’re getting out. We want to get out. We had good meetings with the Taliban and we are going to be leaving. And we’re going to be bringing our soldiers back home. We’d been there for almost 20 years. It’s a long time. We’ve done a great job in terms of getting rid of terrorists. Now it’s up to other countries to get rid of those terrorists.