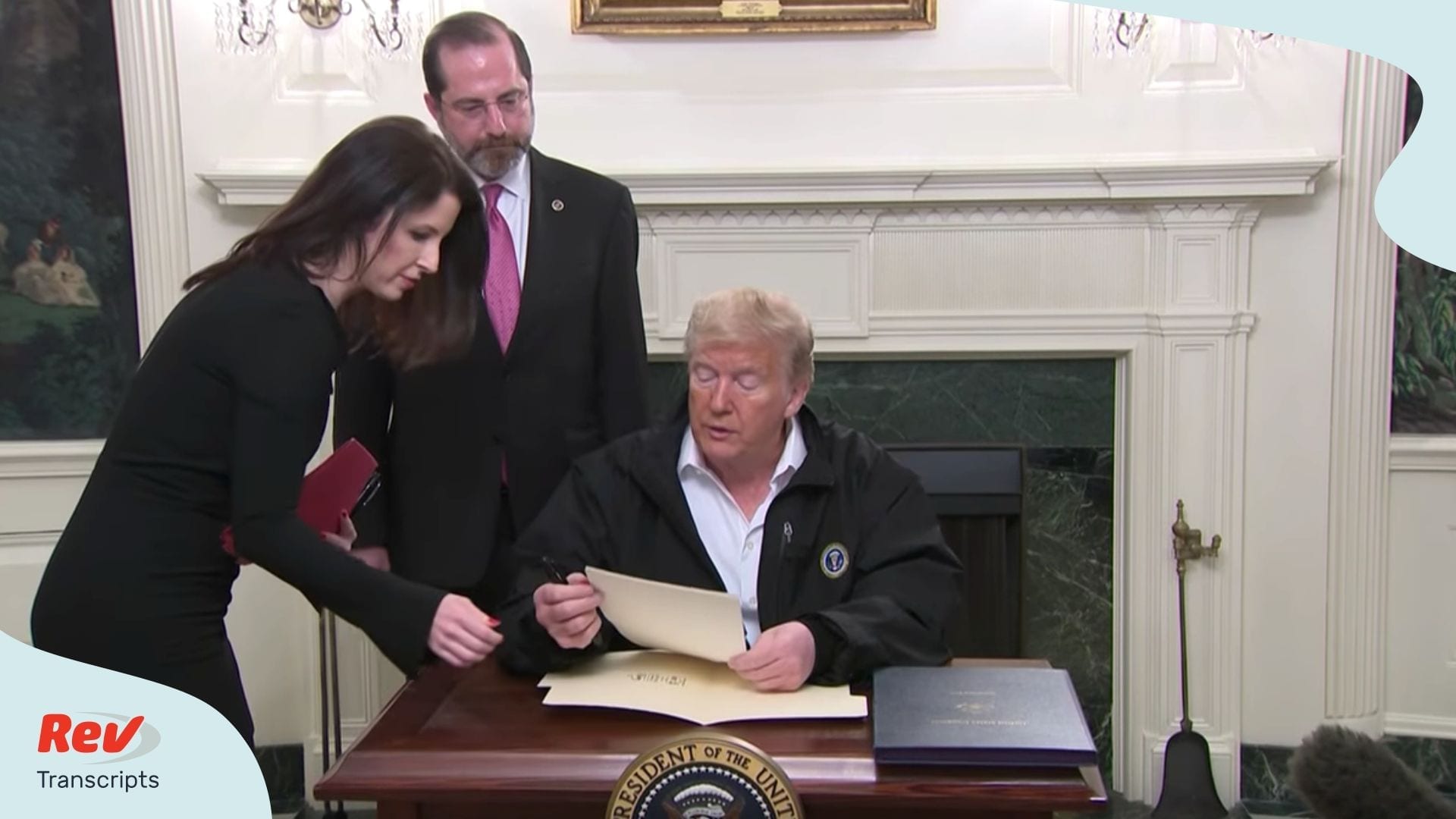 Today Donald Trump held a media event in which he signed a $8.3 billion spending bill to combat the coronavirus or COVID-19. Read the full transcript of the news conference.

President Trump: (00:01)
Going to Tennessee to meet with the Governor of a lot of people, and it’s really something. I guess some of you are coming along I assume. Is that right?

President Trump: (00:16)
Okay. So, we’re signing the 8.3 billion. I asked for two and a half, and I got 8.3, and I’ll take it. Okay, so here we are, 8.3 billion. We’re doing very well, but it’s an unforeseen problem. We’ve got a problem. It came out of nowhere, but we’re taking care of it. We have big news on the ship, and a lot of things that happening on the ship. People are being tested right now, and I just spoke to the Governor of California, Gavin Newsom, we had a good conversation. We’re both working on the ship together, close to 5,000 people, so it’s a big ship. We’re doing testing on those people. Okay. Could I have those other papers that I’m going to sign, please? These are additional papers relevant to various things. Yeah, this is it.

Secretary Azar: (02:02)
I just want to make it clear that in terms of tests, we have provided all the tests in the state of Washington and the state of California that they’ve asked for. The production and shipping of tests that we’ve talked about all week is completely on schedule. All of the CDC tests, the tests that are available to test up to 75,000 people, CDC has shipped to America’s public health labs. Those are out. Then IDT, the private contract working with CDC to ship to the private sector and hospitals, has already shipped enough tests for 700,000 tests, and the remaining lots are arriving at CDC this morning for quality control and should get out as we forecast this weekend, and then next week we’ll keep ramping up production, so as many as 4 million tests next week are going to be driving forward. So, everything is on schedule for the tests.

President Trump: (03:03)
We may go. They thought there was a problem at CDC with somebody that had the virus. It turned out negative, so we’re seeing if we can do it, but yesterday afternoon we were informed that there may have been a person was sick with the virus, and they now find out that that was negative test. They’ve tested the person very fully and it was a negative test. So, I may be going, we’re going to see if they can turn it around with Secret Service. We may be going.

President Trump: (04:08)
No, I think a lot of people are staying here and they’re going to be doing their business here? They’re going to be traveling here and they’ll be going to resorts here, and we are in a great place. It’s where, so far people come, but we’re going to have Americans staying home instead of going and spending their money in other countries, and maybe that’s one of the reasons the job numbers are so good. We’ve had a lot of travel inside the USA.

Speaker 7: (04:29)
Do you think that Congress or your administration need to take more action to diminish the risk of recession?

President Trump: (04:37)
Well, all we can do is do what we do. I mean, we’re getting a lot of business from people staying, in other words, here, which I’ve always liked anyway. You’ve known that for a long time, but people are staying here and spending their money here as opposed to going to Europe and other places. Now that’ll change when this goes away and hopefully that’ll be sooner rather than later. But people, I would say virtually everybody, you saw the job numbers, I guess, people were shocked, because you had another 80 or whatever it is, a lot of numbers from last month where they upgraded, so the job numbers were at a level that nobody thought possible. They were really incredible.

President Trump: (05:18)
I don’t know. I mean we’re going to see whether or not the Fed wants to stimulate. In my opinion, they should because Europe is, and China is, and everybody is but us. We have a Fed that is not exactly proactive. I’m being very nice when I say that.

President Trump: (05:37)
I think what happens is the Fed should cut and the Fed should stimulate, and they should do that because other countries are doing it, and it puts us at a competitive disadvantage and we have the most prime. We are considered by far the most prime, and it’s our dollar that everybody uses. The Fed should stimulate and the Fed, they should cut, and why should Germany have an advantage of over us with interest rates? So, Germany just announced that they’re stimulating and they’re cutting. Asia is, all over Asia they are. China is. China is tremendously and we’re really not, and we pay higher interest. We have a higher rate and it’s ridiculous, frankly. We should have the lowest rate by far, and instead we pay more than other countries. Other countries are paying zero and less than zero, do very well, and we’re paying interest, which is a very conservative approach, but it’s not a good approach because we’re also competing against other countries, whether we like it or not. Even our friends, we’re competing against.

President Trump: (06:47)
Well no, eventually countries have to take care of themselves. We can’t be there for another 20 years. We’ve been there for 20 years and we’ve been protecting the country, but we can’t be there for that next. Eventually they’re going to have to protect themselves. It should have been done a long time ago, but you can only hold somebody’s hand for so long. We have to get back to running our country too, so you understand that.

President Trump: (07:15)
I’ll let you know later. We’ll have to see what happens. I hope they are, but I don’t know. I can’t answer that question.

President Trump: (07:23)
It’s not supposed to happen that way, but it possibly will.

Speaker 9: (07:26)
Any concern that the virus is more widespread than originally thought because of the lack of testing? Is that any reason why you’re not going to Atlanta today?

President Trump: (07:37)
No. No. No. They had one person who was potentially infected and speaking of that, I’d like to go, so you guys are trying to work that out. I was going to Tennessee first, in any event, and then I was stopping in Atlanta, then going down to Florida for meetings. I think that they are trying to work out that I do go. No, I hadn’t heard that. I heard one person and because of the one person at a high level, because of the one person, they didn’t want me going, but I would prefer going, and now that the person, the test came out negative, we’re going to try and go.

President Trump: (08:09)
The most powerful man in all of the media, has a little something to do with the Wall Street Journal. I don’t know if you know. It’s just real power. You used to do what they did, right, and he did it so well that he’s the boss at News Corp, of course Rupert has something to say with that, I guess, right? Laughlin, it’s good to have you. It’s good to have you. They treat me very nicely, the media, right, except for the Wall Street Journal, but that’s all right.

President Trump: (08:42)
I don’t think they’re panicking. I don’t think people are panicking. I said last night. We did an interview on Fox last night, a town hall, I think it was very good, and I said, “Calm, you have to calm. It’ll go away.” We do have a situation where we have this massive ship with 5,000 people and we have to make a decision. That’s a big decision because we have very low numbers compared to major countries throughout the world.

President Trump: (09:07)
Our numbers are lower than just about anybody, and terms of deaths, I don’t know what the count is today. Is it 11? 11 people, and in terms of cases, it’s very, very few. When you look at other countries, it’s a very tiny fraction, because we’ve been very strong at the borders. But then you have a ship with a lot of Americans on it. It’s got 5,000 people on it. It’s a massive ship, and they want to come in, so we have to make a decision. We’re working with the Governor of California on that.

Speaker 11: (09:36)
Are you all meeting with President Bolsonaro this weekend?

President Trump: (09:39)
Yeah, I am. We’re having dinner at Mar-a-Lago. He wanted to have dinner in Florida, if that was possible, the President of Brazil, so we’ll be doing that today.

Speaker 12: (09:50)
Do you think financial markets are overreacting?

President Trump: (09:53)
I think financial markets will bounce back as soon as this really bounce back. Don’t forget, they’re down probably 10 or 11% from where they were, but there were up 70%, so it’s a relatively small piece. I don’t like to see it happen because I was looking for 30,000 very soon. It seemed days away from 30,000 and now we have a little more room to make up. But I think financial, I think the country is so strong. We’re so strong as a country now. We have never been like this. The consumer is generating so much because of the tax cuts, the regulation cuts, and the things we’ve done. So, I think we’re in great shape. I mean, I think we’re in great shape. This came unexpectedly a number of months ago. I heard about it in China, came out of China, I heard about it, and we made a good move. We closed it down. We stopped it. Otherwise, the head of CDC said last night that you would have had thousands of more problems if we didn’t shut it down very early. It was a very early shut down, which is something we got right.

Speaker 13: (10:54)
So looking at the Super Tuesday results, you’re aware the Democratic party is unified around Joe Biden, and that will take away your arguments about the Democrats being too left leaning or too socialist.

President Trump: (11:04)
Well, he’s left wing and he’s got all people that are left wing, and in many ways he’s worse than Bernie. Look at what he did with guns. He put Beto in charge of guns. Beto wants to get rid of guns. Right? So, that’s a bad stance, and he’s got a lot of people that are left wing and they’ll be running the government. He’s not going to be running anything. If he ever got in, they’ll be running the government. They’ve got people further left wing than what Bernie has. So, [crosstalk 00:11:29] not going to be good. It wouldn’t be good for Wall Street, I can tell you that. [crosstalk 00:11:33] Plus, if you look at his taxes, he’s going to raise taxes incredibly. He’s going to raise taxes more than Bernie, and he’s open about it. Bernie doesn’t like to talk about it.

Speaker 13: (11:53)
Do you think sexism was a factor in Elizabeth Warren pulling out, and do you believe you will see a female president in your lifetime?

President Trump: (12:00)
No. I think lack of talent was her problem. She had a tremendous lack of talent. She was a good debater. She destroyed Mike Bloomberg very quickly like it was nothing. That was easy for her, but people don’t like it. She’s a very mean person and people don’t like her. People don’t want that. They like a person like me that’s not mean. Okay, I’ll see you guys. 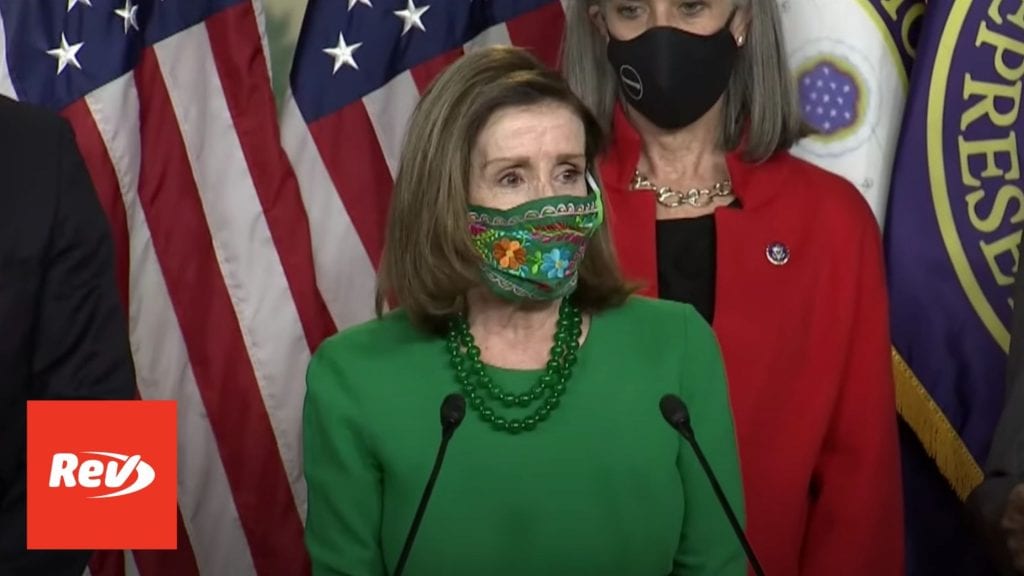 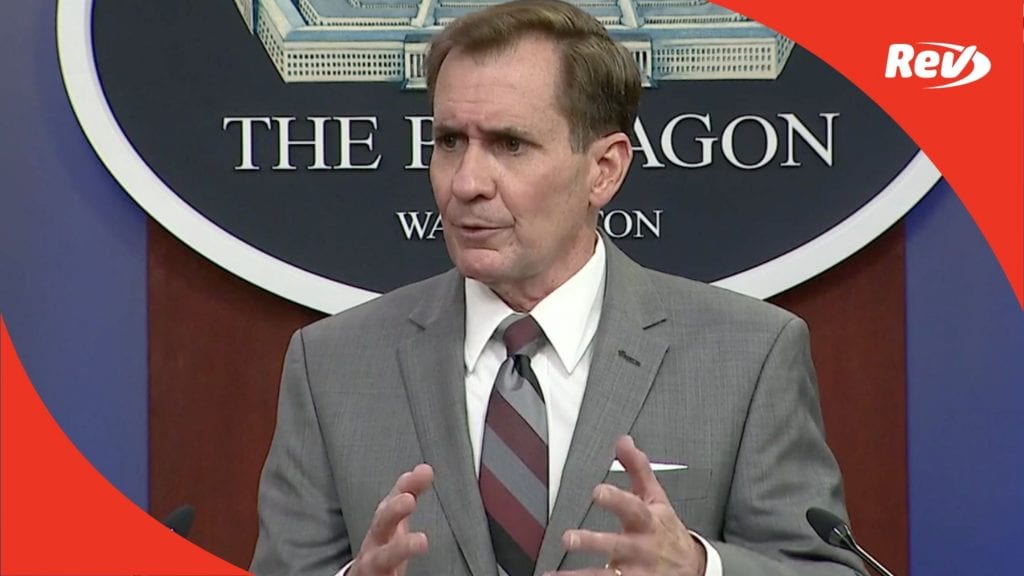 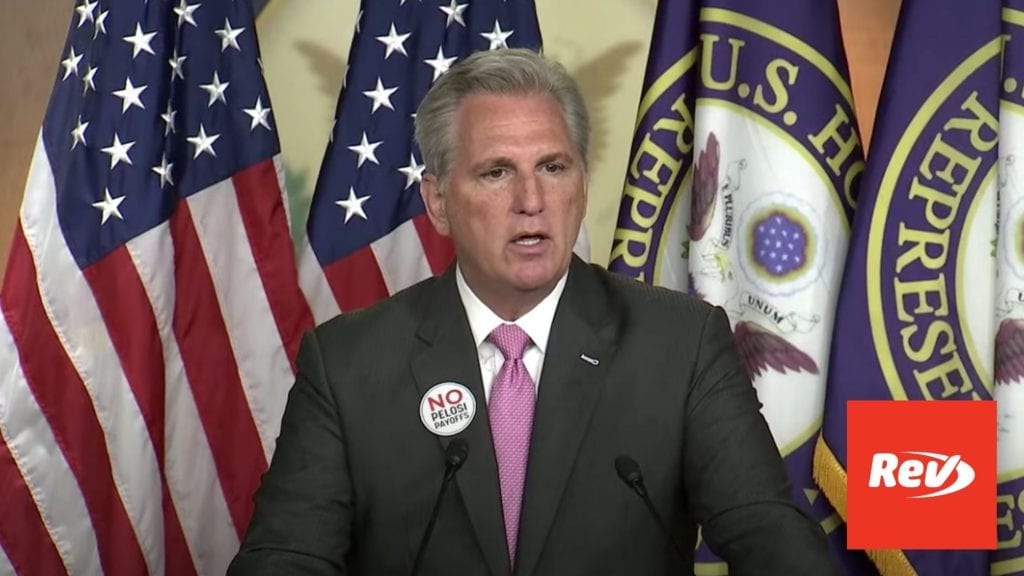