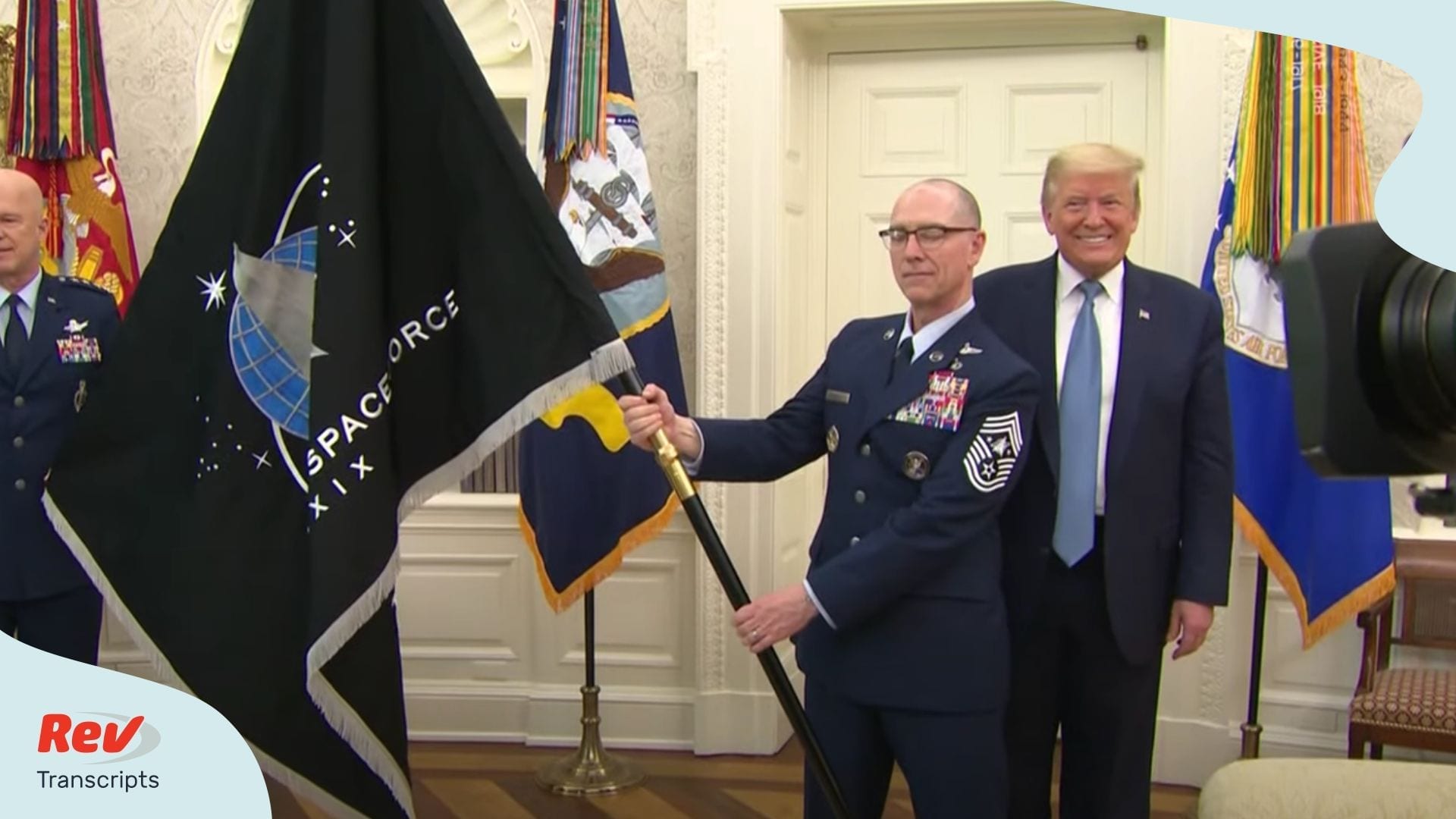 Donald Trump: (00:23)
Well, thank you very much. This is a very special moment, because this is the presentation of the Space Force flag. So we’ve worked very hard on this, and it’s so important from a defensive standpoint, from an offensive standpoint, from every standpoint there is. As you know, China, Russia, perhaps others started off a lot sooner than us. We should have started this a long time ago, but we’ve made up for it in spades. We have developed some of the most incredible weapons anyone’s ever seen, and it’s moving along very rapidly, and we have tremendous people in charge. What I’d like to do is I’d like to just start by asking some of those folks to say a few words on the importance strategically, militarily, and even from a pure civilian standpoint and from bringing our economy back, everything. It’s going to help so much. All made right here in the USA, and it’s going to be very special, very important, Space Force. First time in 72 years, plus that we’ve opened up a new branch of the United States military. Mark, maybe I’ll start with you. You’ll say a few words, please.

Mark Esper: (01:44)
Yes, sir. Let me just say it’s a very historic moment. The United States has been a space faring nation for decades, but we know that our adversaries in the last several years have weaponized space. They’ve made it a war fighting domain, so with the establishment of Space Force and the establishment of Space Command, the United States is now doing what it needs to do to protect our assets in space and to ensure that space remains the heavens by which we not only protect America, but we sustain our economy, we sustain our commercial capabilities, we sustain American’s way of life. So again, another very historic moment. I’m confident that both the Space Force and the Space Command will do what is necessary to defend us in space and to keep America great.

General Milley: (02:27)
Sure. Thank you, Mr. President. As the secretary said, this is a historic day. Sometime ago, we made a decision to establish Space Force, and that’s because we’re undergoing a changing character of war, which is of historic importance for all nations. And as part of that, the space part of our universe opened up as a domain of warfare, and it’s a critical that if we are going to sustain our way of life, if we’re going to defend our nation, that we’re going to have to defend ourselves in space, and therefore the need for Space Force. It’s a great day for the nation. It’s a great day, really, for the world that the United States of America establishes its first Space Force.

General Raymond: (03:10)
Mr. President, thank you for your leadership.

General Raymond: (03:35)
Thank you for leadership.

Barbara Barrett: (03:39)
Thank you, Mr. President. You’ve really demonstrated leadership in establishing the Space Force. This is an important moment and an important month, actually. Most of the Americans before the first cup of coffee in the morning have used space, but very few people realize how important space is to everything that we do, and that it’s vulnerable. We need to up our game in space, and you’ve recognized that and built a force that will help to protect our assets in space and deter aggressive action in space, and if deterrence doesn’t work, to be able to defend our assets in space and those of our allies. So we thank you very much for the leadership you’ve demonstrated, and we’re excited for this breakthrough moment.

Donald Trump: (04:24)
Well, thank you very much. I appreciate it. We’re building right now incredible military equipment at a level that nobody’s ever seen before. We have no choice. We have to do it with the adversaries we have out there. We have, I call it the super duper missile, and I heard the other night, 17 times faster than what they have right now. Then you take the fastest missile we have right now. You’ve heard Russia has five times, and China’s working on five or six times. We have one 17 times, and it’s just gotten the go ahead. 17 times faster if you can believe that, General. That’s something, right? 17 times faster than what we have right now, the fastest in the world by a factor of almost three.

Donald Trump: (05:08)
I just want to congratulate everybody and thank everybody. Space is going to be the future, both in terms of defense and offense and so many other things, and already from what I’m hearing and based on reports, we’re now the leader in space. That took place. Don’t forget, we’re having a meeting today. This is really to unfurl the flag, but we’ve been doing this now for quite a while. I have to say that from my standpoint, having a force, a Space Force in this case, but to be adding to the joint chiefs of staff, which I’ve known about and read about and heard about all my life, just like General Millie, to be the head of the joint chiefs of staff is something that’s a very special thing. Well, to add another force into the joint chiefs, and we’re getting a four-star. In this case, we’re getting a four-star general on your board, so we’re doing something right here.

Donald Trump: (06:05)
So we’re doing something that is such a monumental task, so it’s been more than 72 years. The Air Force, I believe, was the last one. So we have Air Force and not since the Air Force has anything like this happened, and now we have Space Force added on with full honors, I must add. With full honors. So today we’re here for a very important … It’s really an important occasion, because we’re unfurling the flag. With us is Chief Master Sergeant Roger Towberman, and he is … I’d like you to say exactly, because his rank is a very special rank. Tell us about that rank.

Chief Master Sgt. Towberman: (06:52)
Yes, sir. And at the moment, the only one, so I give counsel to the secretary and to the president.

Donald Trump: (07:11)
It’s a very important position. Thank you. You’re with all these generals, but you know what? He’s an important guy, right? So why don’t we go ahead and do it. Let’s do it. Yes, please.

General Raymond: (08:23)
Mr. President, it will stand in your office alongside the other service flags.

General Raymond: (09:49)
I really appreciate it. Thank you for the opportunity.

Donald Trump: (10:33)
Various people including some of the folks from the Hill, and some of our great leaders.

Donald Trump: (10:45)
No, not so much phase four. Phase four could happen, but it’ll happen the right way. We have all the cards, because we have the cards for the American people. I know what they want, and I’ve always known what they want. That’s why I’m sitting here. No, phase four is going to happen, but it’s going to happen in a much better way for the American people. Okay, thank you all very much. [crosstalk 00:11:05].