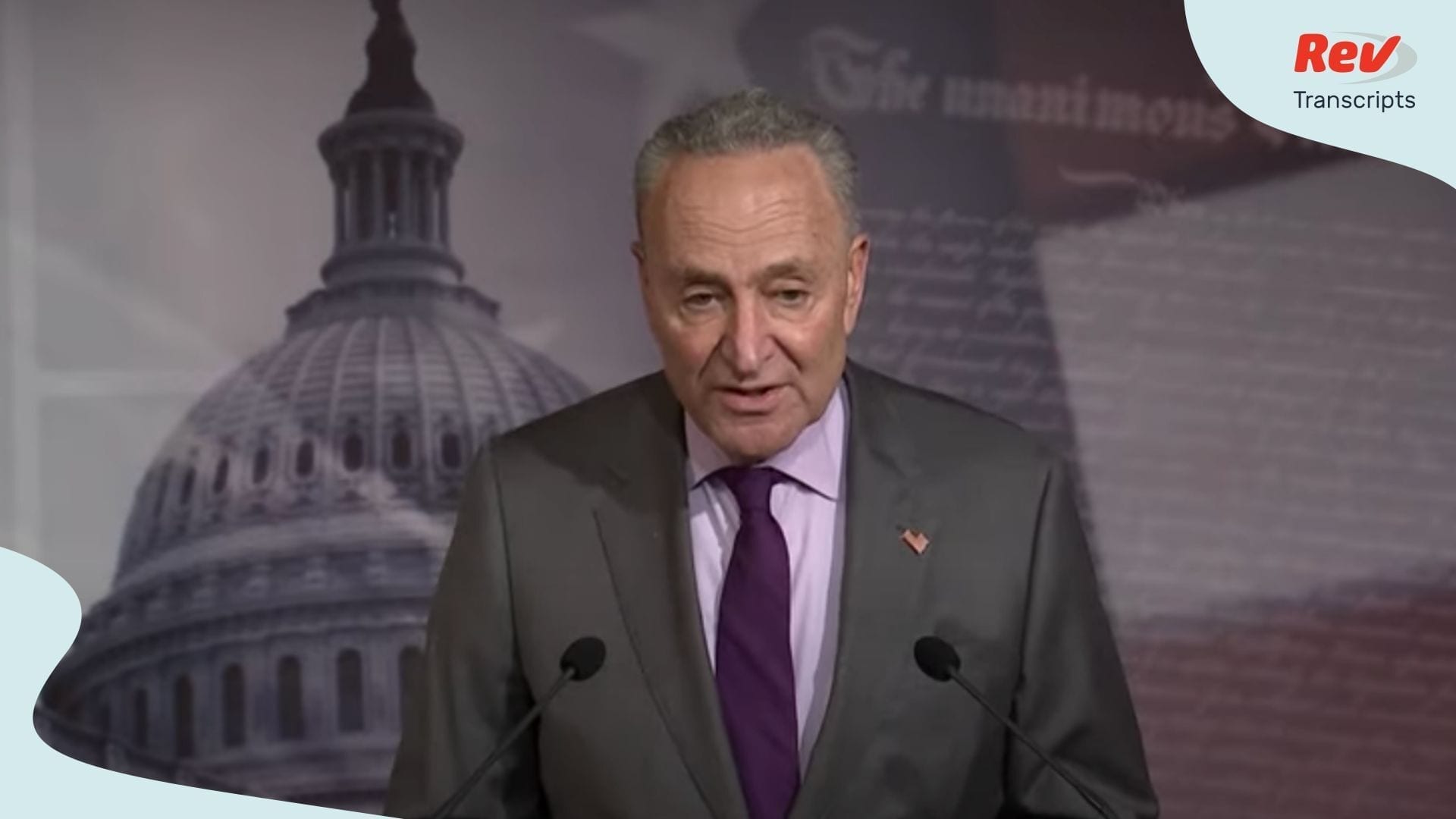 Senate Minority Leader Chuck Schumer held Democratic party luncheon amid coronavirus pandemic. Read the transcript of the speech he gave at the luncheon.

Chuck Schumer: (00:00)
Yes, some hard right base, but to ignore the huge crisis that the American people are facing. So Senators Cardin, Shaheen, Blumenthal and I, went to the floor today, because this bill is necessary. Even Marco Rubio who objected admitted the bill was necessary, and a good thing, and also to point out what we should be doing here: focusing on COVID, focusing on our oversight responsibility. This week, Fauchi, [inaudible 00:00:29], Mnuchin, [inaudible 00:00:32], the SBA Administrator, Carranza, and Powell should all be before the Senate being asked very hard and tough questions. That is not happening. And so we moved to RUC, and we hope maybe this week our Republican friends will reconsider. You have to have oversight. Ready for your questions. Yes.

Speaker 2: (00:55)
One of the groups of small businesses that’s asking for way more help, way more flexibility, is the restaurant industry. They want flexibility in the terms, and also $120 billion stabilization fund. Could you comment on that? Is that –

Chuck Schumer: (01:10)
Well, I do know, I’ve spoken to lots of the restaurant owners in New York, and many of them are worried that the program might not fit their needs. They need the money. Don’t get me wrong, they want the program. But the problem as they see it, many of them, is that they’re closed now and when they’re, allowed to open up, they will have very few customers and yet they’ll have to have their employees come back. And if that’s after June 30th will they be allowed to have money? So these are the kinds of reasons we need money to see who’s getting it, why they’re getting it. And of course we should improve and change these programs. Small businesses, minority businesses would have gotten much less, if we hadn’t stood our ground. When Leader McConnell just introduced a bill to get more money to PPP with no changes, and we insisted on changes. We’re going to have to do that again.

Chuck Schumer: (01:59)
Each time we’ve had a bill, Leader McConnell has introduced his own bill with no consultation, and the needs of the country forced him to negotiate with us and we made the bill better. And the idea that he said he’s going to have to wait and see? People are hurting. I’d say to Leader McConnell. People are losing their jobs every day. Small businesses are going bankrupt every day. People are getting Corona every day, and people are dying every day. We can’t sit here and twiddle our thumbs and say, “Let’s wait”. There are huge needs, and the failure to act will be far more harmful than acting to solve these problems.

Speaker 3: (02:42)
Oh, speaking of huge needs, what is your latest estimation of the needs of the state, for state and local governments? The Speaker has talked about trillion dollars. Is that your estimation?

Chuck Schumer: (02:55)
Yes, the state and local governments need huge amounts of money. And again, if Leader McConnell thinks they can wait, he ought to talk to some Republican governors, as well as democratic ones. The bottom line is very simple: every day now, police officers who protect us, firefighters who protect us, food safety workers, bus drivers, are being thrown out of work because localities don’t have money. We need flexibility, but we need lots more money. Or the whole economy will hurt. And what I’d like Leader McConnell to understand is, this is not some abstract concept, “State and local government”. These are real people who did nothing wrong, who are losing their jobs. Just like the people who work for small businesses are losing their jobs. Just like the people who work in healthcare are losing their jobs; they’re just as important.

Chuck Schumer: (03:54)
I think the level of need for state and local governments, look, we had a force, the one 50 in CARES 1, or in COVID 3, I’d say 3354, I don’t know why. Okay, but in COVID 3, the reason we didn’t pass the bill till midnight is, Mnuchin and I were eyeballing us about the need for state and local money. We got $150 billion; even then we said that’s far too little. We’re going to need a lot more, and that’s not based on just a wishlist, that’s based on real figures from governors, mayors, county executives, town leaders, who show us how much they’re hurting.

Speaker 4: (04:34)
So you’ve got McConnell saying that liability was [inaudible 00:04:38] red line. The president says payroll tax cut is his red line. What do you make of that? What is the actual –

Chuck Schumer: (04:45)
[crosstalk 00:04:45] I make that, this idea of drawing red lines, particularly when they’re not really related to what the needs of people are, particularly when they side with big corporate interests as opposed to individual workers as Leader McConnell’s red line, it’s not productive and it’s not going to work. People have real needs. Today Josh Hawley, hardly a shrieking liberal said, “We’re going to need a big bold number 4 bill”, we’re going to need a big bold bill. And what forced McConnell last time to do it, was the needs of the country. He had his ideological predispositions, he had his political predispositions, and he was forced to negotiate with us and give us many things we wanted.

Chuck Schumer: (05:30)
Well, they got to get their act together. I mean, when the president says he wants one thing and he has one red line, and McConnell says he wants another thing and he has a red line and the leader of the Senate says, “We don’t even want to negotiate, we want to wait and see”? tell that to someone who’s just lost his job, “Wait and see”. Tell that to a small business where a business woman has sweated 20 years over this business, and it now may be gone. Tell that to a family who has someone in a hospital, in a rural area that’s just beginning to get hit with COVID. Yes.

Chuck Schumer: (06:13)
Because the needs of people. Why have we largely gotten many of the things we wanted in these bills over Republican existence? People were crying out. People are crying out for certain programs and certain needs, and COVID 35, COVID 3 was an initial bill; it was $2 trillion. COVID 35, was just intended to fix some of the problems of the existing programs, but there are lots of things that still need to be done, and I believe you’ll see that, we might not get every one of them, but we’ll get a large number of them, because of the needs of the people, and because this Republican idea, “Let’s sit on our hands and leave it up to a business to solve this problem,” just doesn’t work. That’s why we’ve had the upper hand, and we still will. Mr [inaudible 00:00:07:05].

Speaker 6: (07:05)
Thank you Mr Leader. I just want to get your reaction to the president and congressional oversight. You know his Legislative Affairs Office post this memo about how there’s going to be – [inaudible 00:07:18] [crosstalk 00:07:18]

Chuck Schumer: (07:18)
Okay this president, he’s got a lot of problems. One of his biggest is he runs away from truth. And oversight is truth. Oversight shows what’s going on. We knew this coronavirus was a real problem, and the president ran away from truth. We knew that we needed to do much more with testing, and the president is still running away from truth. You run away from truth, you run away from facts. The country gets hurt, and it hurts the president too. What he doesn’t get is, if he had a national testing regime, it would help him in his goal of opening the country more quickly, but somehow facts don’t add up with him. And so he’s afraid of the truth, he fires people who tell him the truth, and he doesn’t want oversight, because actually the truth might come out. It’s going to hurt the country, it’s going to hurt the president, and I don’t think it’ll last. We need oversight. That’s part of the congressional responsibility.

Speaker 7: (08:21)
Senator Schumer, it sounds like they might be dismantling the Coronavirus Taskforce. I wonder your reaction –

Chuck Schumer: (08:27)
I don’t know, I didn’t hear about that, but they really haven’t had anyone in charge, except the president, who every day has a different… He spends half his time on whims, medicines that don’t work. He spends half his time on blaming other people or other issues. You know, he’s now blaming China. Well, guess what, Mr President, even if it came from China, and even if it came from China [inaudible 00:08:55], why didn’t you do something about it? South Korea did, Australia did. The idea is to deal with the problem, not just spend all your time with pointing fingers of blame. It doesn’t make anybody better. Yes.

Speaker 8: (09:10)
Are you surprised that Republicans who are up for election in difficult States are not doing more to distance themselves from the president’s coronavirus response?

Chuck Schumer: (09:19)
[crosstalk 00:09:19] Listen, they are so afraid of distancing themselves from the president because he’s vindictive, and his base is vindictive, that they hurt themselves all the time. Okay, thanks everybody.