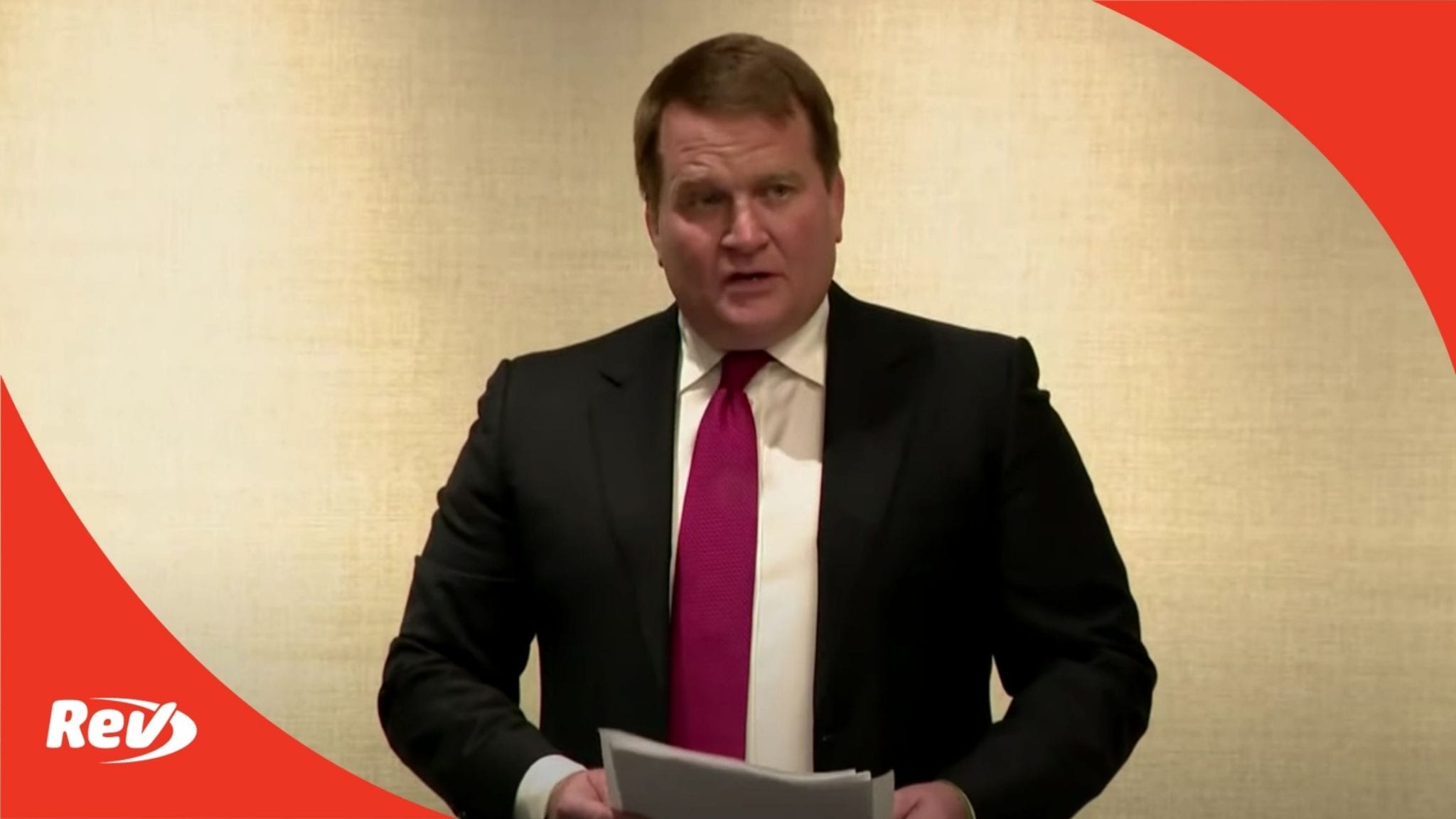 Tony Bobulinski: (00:23)
Good evening. My name is Tony Bobulinski. I served as a Lieutenant in the United States Navy with high security clearance. My father and grandfather both served for decades in our country’s armed forces. Since leaving the Navy, I’ve been involved in various successful businesses, both in this country and abroad.

Tony Bobulinski: (00:44)
I’m making the statement to set the record straight about the involvement of the Biden family, Vice President Biden, his brother, Jim Biden, and his son Hunter Biden in dealings with the Chinese. I’ve heard Joe Biden say that he’s never discussed business with Hunter. That is false. I have firsthand knowledge about this because I directly dealt with the Biden family, including Joe Biden.

Tony Bobulinski: (01:13)
I have also heard that Vice President Biden said on Tuesday that Senator Ron Johnson, the Chair of the Senate Homeland Security Committee should be ashamed for suggesting the Biden family sought to profit from their name.

Tony Bobulinski: (01:27)
Well, here are the facts I know, and everything I’m saying is corroborated by emails, WhatsApp chats, agreements, documents, and other evidence. And the American people can judge for themselves. I brought, I guess for record three phones that spanned the years 2015 through 2018, these phones have never been held by anybody else besides myself.

Tony Bobulinski: (01:59)
I was told this past Sunday by somebody who was also involved in this matter, that if I went public, this information it would bury all of us, man, the Biden’s included. I have no wish to bury anyone. I’ve never been political. The few contributions I’ve made have been to Democrats.

Tony Bobulinski: (02:19)
But what I am is a patriot, and a veteran. To protect my family name and my business reputation, I need to ensure that the true facts are out there. In late 2015, I was approached by James Gilliar, whom I had known for many years, about joining him in a deal, which he said would involve the Chinese state-owned enterprise, CFC China Energy, and what he called one of the most prominent families in the United States.

Tony Bobulinski: (02:49)
I was informed first by Gilliar, and then by Hunter Biden, and by Rob Walker, who was working with the Bidens that the Bidens wanted to form new entity with CFC, which was to invest in infrastructure, real estate, and technology in the US and around the world, and the entity would initially be capitalized with $10 million, and then grow to billions of dollars of investment capital.

Tony Bobulinski: (03:34)
And between February and May, 2017, we exchanged numerous emails, documents, and WhatsApp messages concerning Sino Hawk and its potential business. On May 2nd, 2017, the night before Joe Biden was to appear at the Milken Conference, I was introduced to Joe Biden by Jim Biden and Hunter Biden. And at my approximately hour-long meeting with Joe that night, we discussed the Biden’s history, the Biden’s family business plans with the Chinese, with which he was plainly familiar, at least at a high level.

Tony Bobulinski: (04:11)
After that meeting, I had numerous communications with Hunter, Walker, Gilliar, and Jim Biden regarding the allocation of the equity ownership of Sino Hawk. On May 13th, 2017, I received an email concerning allocation of equity, which says, “10% held by H for the big guy.” In that email there’s no question that, “H,” stands for Hunter, “Big guy,” for his father Joe Biden, and ,”Jim,” for Jim Biden. In fact, Hunter often referred to his father as, “The big guy,” or, “My chairman.”

Tony Bobulinski: (05:03)
I also had a disagreement with Hunter about the funds CFC was contributing to Sino Hawk. Hunter wanted five million of those funds to go to himself and his family. So he wanted the funds wired directly to an entity affiliated with him. I objected because that was contrary to our written agreements concerning Sino Hawk.

Tony Bobulinski: (05:25)
He said, referring to the chairman, his father, that CFC was really investing in the Biden family, that he held the trump card, and that he was the one putting his family legacy on the line.

Tony Bobulinski: (05:37)
He also said to me, on May 17th, 2017, that CFC wanted to be my partner, to be partnered with the Bidens. During these negotiations, I repeated to Hunter and others that at Sino Hawk could not be Hunter’s personal piggy bank. And I demanded that proper corporate governance procedures be implemented for capital distributions.

Tony Bobulinski: (06:02)
Hunter became very upset with me. CFC, through July, 2017 was assuring me the funds would be transferred to Sino Hawk, but they were never sent to our company. Instead I found out from Senator Johnson’s September report that the $5 million was sent in August, 2017 to entities affiliated with Hunter.

Tony Bobulinski: (06:28)
Tomorrow, I will be meeting with the Senate committee members concerning this matter, and I will be providing to the FBI the devices which contain the evidence corroborating what I have said. So I will not be taking any questions at this time.

Tony Bobulinski: (06:47)
I will not be taking questions at this time.

Tony Bobulinski: (06:53)
The evidence sits on these three phones. I don’t want to go into anything any further. This will all be discussed with Senator Johnson and his committee, and the American people can decide what’s fact.

Speaker 10: (07:16)
Did Rudy Giuliani have anything to do with your appearance here?