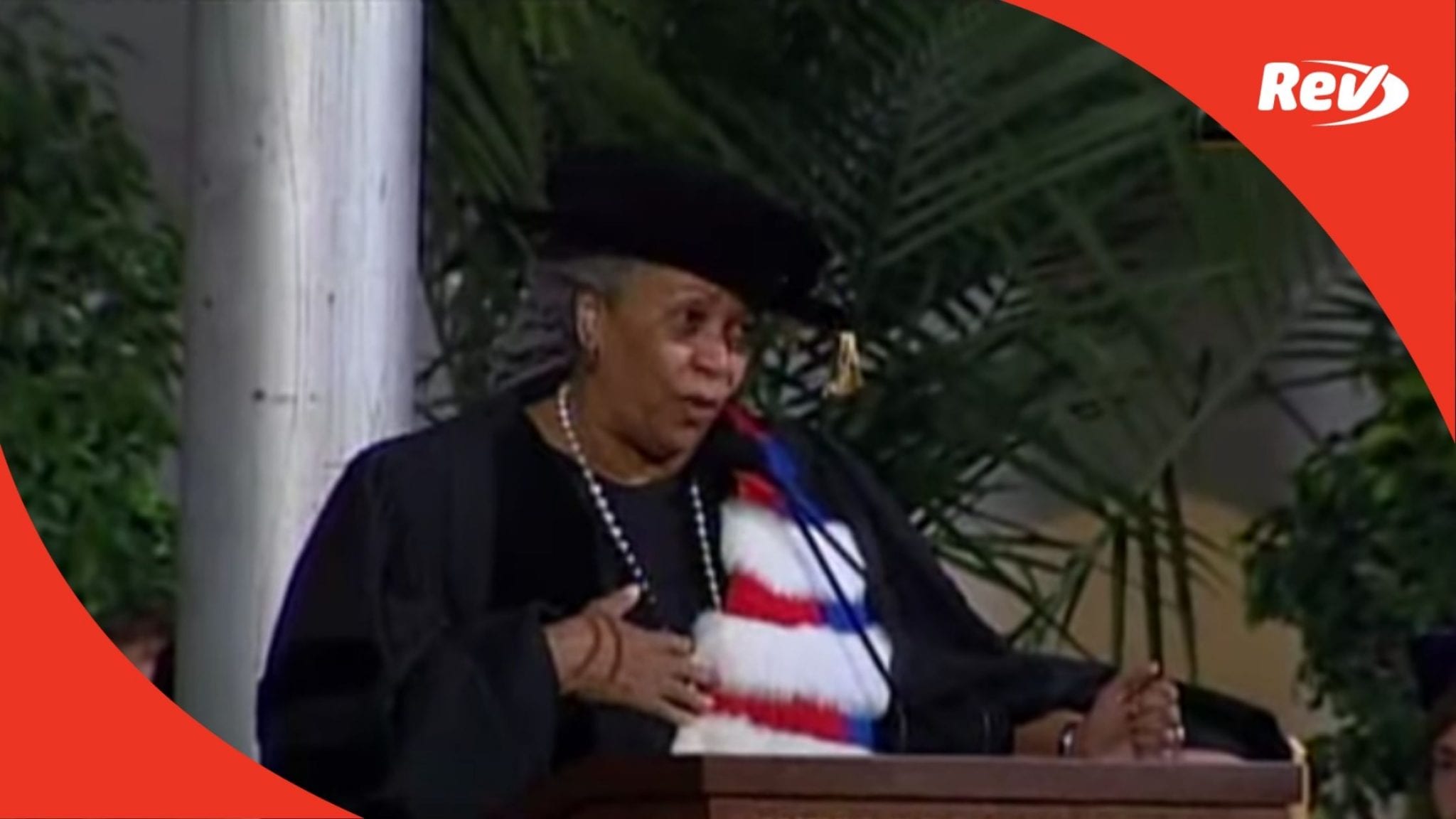 Toni Morrison: (00:54)
My initial response, of course, was a very strong sense of pleasure at participating personally and formally in the rights of an institution with this reputation, 125 years of history in women’s education, an enviable rostrum of graduates, its commitment sustained over the years to making a difference in the world, and its successful resistance to challenges that women’s colleges have faced from the beginning and throughout the years. It’s an extraordinary record, and I was delighted to be asked to participate and return to this campus.

Toni Morrison: (02:08)
But my second response was not so happy. I was very anxious about having to figure out something to say to this particular class at this particular time, because I was really troubled by what could be honestly said in 2004 to over 500 elegantly-educated women or to relatives and friends who are relieved at this moment, but hopeful as well as apprehensive, and to a college faculty and administration dedicated to leadership and knowledgeable about what that entails.

Toni Morrison: (03:12)
Well, of course, I could reassure the relatives and the friends, just tell them that youth is always insulting because it manages generation after generation, not only to survive and replace us, but to triumph over us completely. And I would remind the faculty and the administration of what each knows, that the work they do takes second place to nothing, nothing at all. And that this is, theirs is a first-order profession.

Toni Morrison: (04:00)
Now, of course, to the graduates, I could make reference to things appropriate to your situation, the future, the past, the present, but most of all, happiness. Regarding the future, I would have to rest my case on some bromide like the future is yours for the taking or that it’s whatever you make of it. But the fact is it is not yours for the taking, and it is not whatever you make of it.

Toni Morrison: (04:58)
The future is also what other people make of it, how other people will participate in it and impinge on your experience of it. But I’m not going to talk anymore about the future because I’m hesitant to describe or predict because I’m not even certain that it exists. That is to say I’m not certain that somehow perhaps a burgeoning menage a trois of political interests, corporate interests and military interests will not prevail and literally annihilate an inhabitable, humane future, because I don’t think we can any longer rely on separation of powers, free speech, religious tolerance, or unchallengeable civil liberties as a matter of course.

Toni Morrison: (06:27)
That is, not while finite humans in the flux of time make decisions of infinite damage, not while finite humans make infinite claims of virtue and unassailable power that are beyond their competence, if not their reach. So no happy talk about the future. Maybe the past offers a better venue. You already share a old tradition of an uncompromisingly intellectual women’s college, and that past and that tradition is important to both understand and preserve. It’s worthy of reverence and transmission.

Toni Morrison: (07:46)
You’ve already learned some strategies for appraising the historical and economical and cultural past that you have inherited. But in any honest speech focusing on the splendor of the national past that you are also inheriting, you will detect a faint note of apology in the descriptions of this bequest, a kind of sorrow that accompanies it because it’s not good enough for you, because the past is already in debt to the mismanaged present. And besides, contrary to what you may have heard or learned, the past is not done, and it is not over. It’s still in process, which is another way of saying that when it’s critiqued, analyzed, it yields new information about itself.

Toni Morrison: (09:05)
The past is already changing as it is being reexamined, as it is being listened to for deeper resonances. Actually, it can be more liberating than any imagined future if you are willing to identify its evasions, its distortions, its lies and are willing to unleash its secrets. But again, it seemed inappropriate, very inappropriate for me to delve into a past for people who are in the process of making one, forging their own. So I consider just focusing on your responsibilities as graduates, as graduates of this institution and citizens of the world and just tell you once again, repeat to you the admonition, a sort of a wish, that you go out and save the world.

Toni Morrison: (10:25)
That is to suggest to you that with energy and right thinking, you can certainly improve. Certainly you might even rescue it. Now, that’s a heavy burden to be placed on one generation by a member of another generation, because it’s a responsibility we ought to share. Not save the world, but simply to love it, meaning don’t hurt it. It’s already beaten and scoured and gasping for breath. Don’t hurt it or enable others who do and will. Know and identify the predators waving flags made of dollar bills. They will say anything, promise anything, do everything to turn the planet into a casino where only the house cards can win. Little people with finite lives love to play games with the infinite.

Toni Morrison: (11:47)
But I thought better of that, selecting your responsibilities for you. If I did that, I would assume your education had been in vain and that you were incapable of deciding for yourself what your responsibilities should be. So I’m left with the last thing that I sort of ignored as a topic, happiness. I’m sure you have been told that this is the best time of your life. It may be, but if it’s true that this is the best time of your life, if you have already lived or are now living, at this age, the best years, or if the next few turn out to be the best, then you have my condolences. Because you’ll want to remain here stuck in these so-called best years, never maturing, wanting only to look, to feel and be the adolescent that whole industries are devoted to forcing you to remain. One more flawless article of clothing, one more elaborate toy, the truly perfect diet, the harmless but necessary drug, the almost final elective surgery, the ultimate cosmetic, all designed to maintain hunger for stasis.

Toni Morrison: (13:55)
While children are being eroticized into adults, adults are being exoticized into eternal juvenilia. I know that happiness has been the real, if covert, target of your labors here. Your choices of companions, of the profession that you will enter, you deserve it, and I want you to gain it. Everybody should. But if that’s all you have on your mind, then you do have my sympathy. And if these are indeed the best years of your life, you do have my condolences. Because there is nothing, believe me, more satisfying, more gratifying than true adulthood, the adulthood that is the span of life before you. The process of becoming one is not inevitable. Its achievement is a difficult beauty, an intensely hard-won glory which commercial forces and cultural vapidity should not be permitted to deprive you of.

Toni Morrison: (15:27)
Well, if I can’t talk inspiringly and hopefully about the future or the past or the present and your responsibilities to the present or happiness, you might be wondering why I showed up. If things are that dour, that tentative, you might ask yourselves, what has this got to do with me? What about my life? I didn’t ask to be born, you may say. I beg to differ with you. Yes, you did. In fact, you insisted upon it. It’s too easy, too ordinary, too common to not be born.

Toni Morrison: (16:19)
So your presence here on earth is a very large part your doing. So it is up to the self, that self that insisted on life, that I want to speak now candidly and tell you the truth that I have not really been clear-headed about the world I have described to you, the one you are inheriting. All my ruminations about the future, the past, responsibility, happiness were really about my generation, not yours. My generation’s profligacy, my generation’s heedlessness and denial, its frail ego that required endless drafts of power juice and repeated images of weakness in others in order to prop up our own illusion of strength, more and more self-congratulation while we sell you more and more games and images of death as entertainment.

Toni Morrison: (17:47)
In short, the palm I was reading wasn’t yours. It was the splayed hand of my own generation. And I know no generation has a complete grip on the imagination and work of the next one, not mine and not your parents’, not if you refuse to let it be so. You don’t have to accept those media labels. You need not settle for any defining category. You don’t have to be merely a taxpayer or a red state or a blue state or a consumer or a minority or a majority. Of course, your general, but you’re also specific. A citizen and a person, and the person you are is like nobody else on the planet.

Toni Morrison: (18:42)
Nobody has the exact memory that you have. What is now known is not all what you are capable of knowing. You are your own stories, and therefore free to imagine and experience what it means to be human without wealth, what it feels like to be human without domination over others, without reckless arrogance, without fear of others unlike you, without rotating, rehearsing and re-inventing the hatreds you learned in the sandbox.

Toni Morrison: (19:31)
And although you don’t have complete control over the narrative, no author does, I can tell you, you can nevertheless create it. Although you will never fully know or successfully manipulate the characters who surface or disrupt your plot, you can respect the ones who do by paying them close attention and doing them justice. The theme you choose may change or simply allude you, but being your own story means you can always choose the tone. It also means that you can invent the language to say who you are and how you mean.

Toni Morrison: (20:37)
But then I am a teller of stories and therefore an optimist, a believer in the ethical bend of the human heart, a believer in the mind’s disgust with fraud and its appetite for truth, a believer in the ferocity of beauty. So from my point of view, which is that of a storyteller, I see your life as already artful, waiting, just waiting and ready for you to make it art. Thank you.

Speaker 2: (22:14)
Thank you so much, Toni Morrison, for your penetrating and provocative words, for honoring this class with your serious message, and for your presence in every meaning of that word.