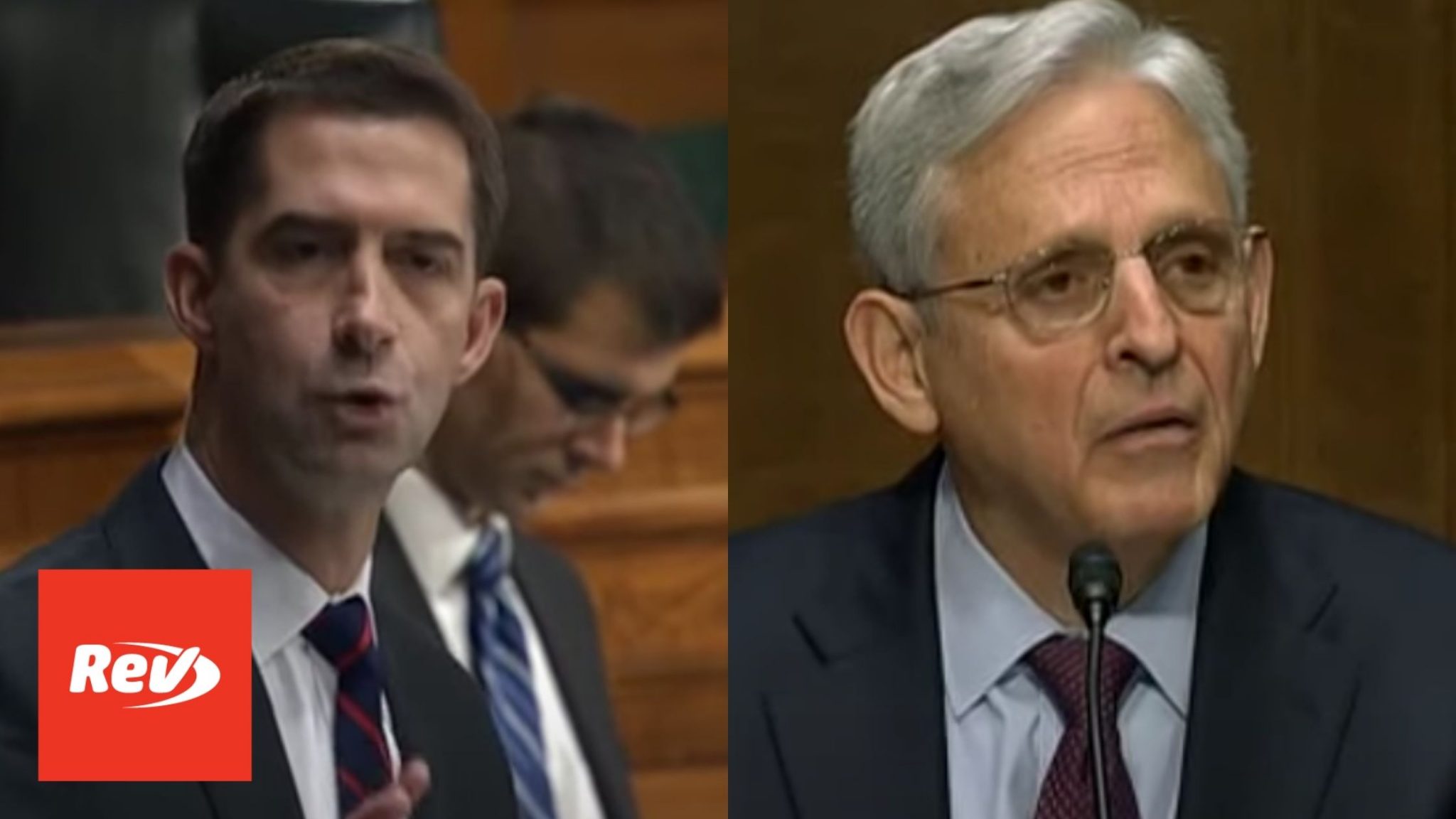 Senator Tom Cotton told Attorney General Merrick Garland he “should resign in disgrace” during a congressional hearing on October 27, 2021. Read the transcript of the exchange here.

Merrick Garland : (00:26)
The long-time rule and the justice department is not to discuss pending investigations, potential investigations.

Senator Cotton: (00:34)
Okay. That’s fine. That’s fine. Do you believe Tony Fauci was truthful when he said his agency had never funded gain of function research?

Merrick Garland : (00:43)
This is outside of my scope of knowledge.

Senator Cotton: (00:45)
Okay. Let’s turn to your outrageous directive, siccing the feds on parents at school boards across America. When you crafted that October 4th memo, did you consult with senior leadership at the FBI?

Merrick Garland : (00:59)
My understanding was that the memo or the idea of the memo had been discussed with the FBI before it-

Senator Cotton: (01:05)
Did anyone at the FBI express any doubt or disagreement or hesitation with your decision to issue that memo?

Senator Cotton: (01:19)
Because a lot of them have contacted us and they said they did, Judge.

Senator Cotton: (01:23)
A lot of FBI officials have contacted my office and said that they opposed this decision.

Merrick Garland : (01:28)
Well, I doubt any of them spoke to me about it because I didn’t speak to … And no one made that comment to me.

Merrick Garland : (02:16)
Nothing in this memorandum or any memorandum is about parents expressing disagreements with their school boards. The memorandum makes clear that parents are entitled and protected by the First Amendment to have vigorous debates. The Justice Department is not interested in that question at all. [crosstalk 00:02:37].

Merrick Garland : (02:48)
This is not, again, about parents at school boards. This is about threats of violence.

Senator Cotton: (03:36)
Okay, let’s look at one of those statutes you cited. Section 223, that statute covers the use of not just telephones, but telecommunications devices to annoy, to annoy someone. So are you going to sic your US attorneys and the FBI on a parents’ group if they post on Facebook something that annoys a school board member, Judge?

Merrick Garland : (03:58)
The answer to that is no. And the provision that I was particularly drawing to his attention was 2261A, which was to engage in-

Senator Cotton: (04:11)
Okay. Judge, you also told Senator Klobuchar that this memorandum was about meetings and coordination.

Senator Cotton: (04:19)
What I have in my hand right here that I’ll submit to the record, a letter from one of your US attorneys. To all of the county attorneys, to the attorney general, to all sheriffs, to the School Board Association of his state, in which he talks about federal investigation and prosecution. It’s not about meetings, not about coordinations, it’s about federal investigation and prosecution. Did you direct your US attorneys to issue such a letter?

Merrick Garland : (05:00)
I don’t have any idea. My memorandum speaks specifically about setting up meetings and I’ll just read it again. Convene meetings-

Senator Cotton: (05:10)
We’ve also heard you dissemble about your memorandum. I have and the record now shows one of your US attorneys sending out a letter about federal prosecution investigation and list in detail the federal statutes for which you could be prosecuted. Judge, you’ve talked a lot about intimidation and harassment. Have you issued a memorandum like your October 4th memorandum about the Black Lives Matters rights from last summer?

Senator Cotton: (05:45)
Okay. Judge, what about this? It is no doubt, even though parents at school boards aren’t within federal jurisdiction, there’s no doubt that federal officials are. You keep saying senators. Have you started an investigation into the harassment of Senator Kyrsten Sinema in a bathroom because she won’t go along with the Democratic Party’s big tax and spend agenda. That is a sitting United States Senator being harassed in a bathroom.

Merrick Garland : (06:09)
I don’t know whether the Senator has referred the matter to the Justice Department or not.

Senator Cotton: (06:35)
So it was only prepared … Okay. I think that answers the question.

Merrick Garland : (06:37)
I already answered that question before.

Senator Cotton: (06:39)
So you keep citing the school board letter and news reports.

Senator Cotton: (06:42)
One of the news reports cited in that letter, which you presumably mean is from Loudoun County, Virginia.

Senator Cotton: (06:50)
Well, you keep starting news reports and that’s the most prominent news report that anyone in America has seen. That refers to Scott Smith, whose 15-year-old daughter was raped. She was raped in a bathroom by a boy wearing girl’s clothes. And the Loudoun County School Board covered it up because it would have interfered with their transgender policy during Pride Month. And that man, Scott Smith, because he went to a school board and tried to defend his daughter’s rights was condemned internationally. Do you apologize to Scott Smith and his 15-year-old daughter, Judge?

Merrick Garland : (07:25)
Senator, anyone whose child was raped is the most horrific crime I can imagine and is certainly entitled and protected by the First Amendment to protest to their school board about that.

Senator Cotton: (07:38)
But he was cited by the School Board Association as a domestic terrorist-

Senator Cotton: (07:42)
… which we now know that letter and those reports were the basis for your …

Senator Cotton: (07:47)
Judge, this is just shameful. This testimony, your directive, your performance is shameful.

Senator Cotton: (07:53)
Thank God you are not on the Supreme Court. You should resign in disgrace, Judge.

Merrick Garland : (08:04)
Okay. I wasn’t sure there was a question there. But let me be clear, the news reports I’m talking about were not the news reports in that letter. They were other news reports that everybody here has heard about, subsequent reports that everybody has heard about. There is nothing in this memorandum, and I wish if senators were concerned about this, they would quote my words. This memorandum is not about parents being able to object in their school boards. They are protected by the First Amendment. As long as there are no threats of violence, they are completely protected. So parents can object to their school boards about curriculum, about the treatment of their children, about school policies. All of that is a hundred percent protected by the First Amendment. And there is nothing in this memorandum contrary to that. We are only trying to prevent violence against school officials. Thank you.