Ted Cruz Speech Transcript: Argues Some Children Should Have Access to Guns 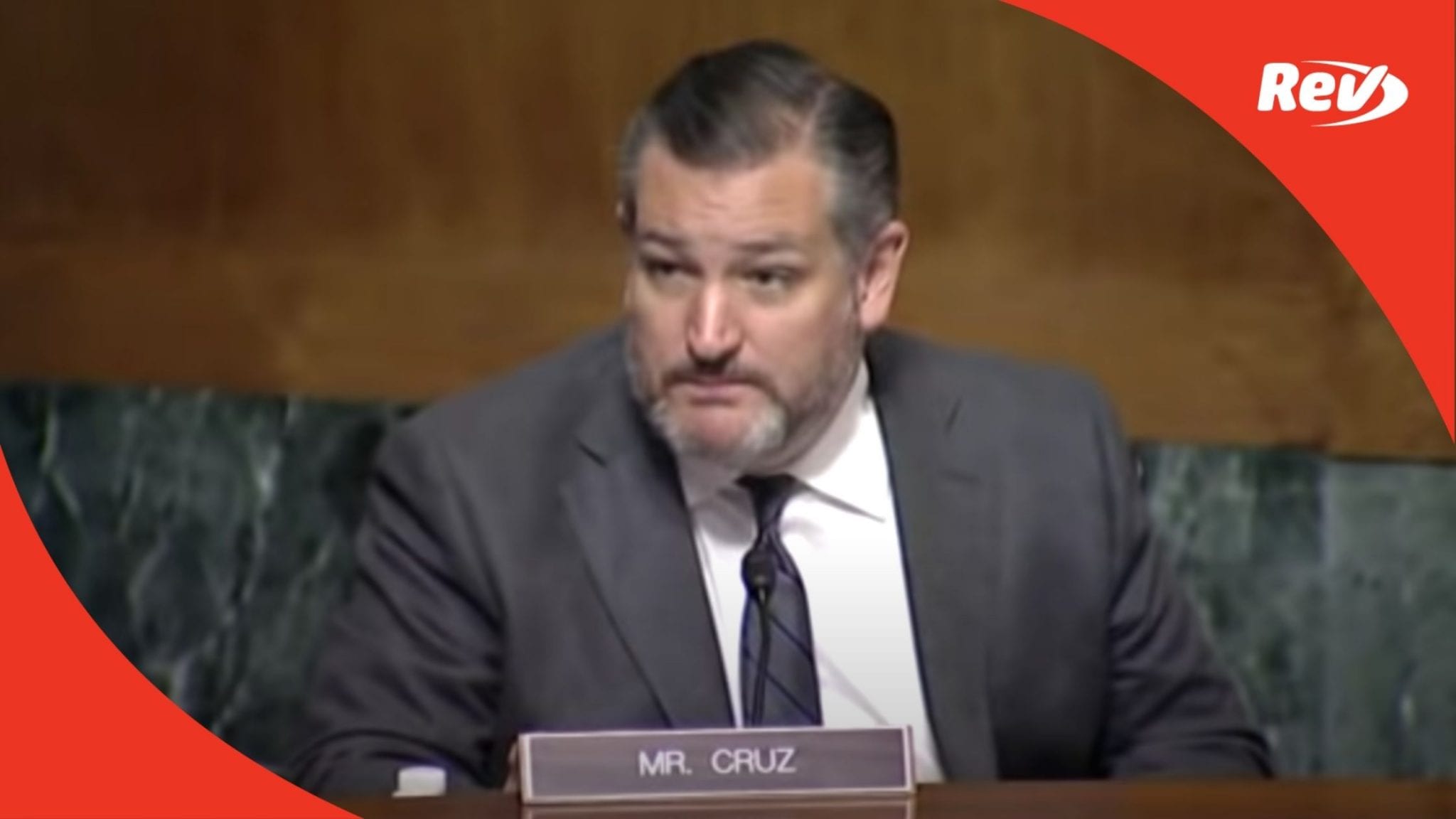 Texas Senator Ted Cruz argued some children should have access to firearms during a Senate hearing on gun safety on May 25, 2021. Read the transcript of his speech remarks here.

Ted Cruz: (00:00)
Thank you Mr. Chairman. Thank you to each of the witnesses that are here today. Every responsible gun owner knows that safely score storing their firearms is critical. Heidi and I store our firearms safely and we expect that everyone with a firearm in their home should do the same. We also know that when firearms are not stored responsibly, there can be tragic consequences.

Ted Cruz: (00:32)
Senator Blumenthal spoke about Ethan Song, a 15-year-old boy who fatally shot himself by accident with a firearm that was stored at a friend’s house. All of us, our heart just goes out to the entire family and Ms. Song, thank you for being here. Thank you for telling your son’s story. As a parent, what you experienced is a nightmare that terrifies every parent. All of us want to avoid tragedies like that happening in the future.

Ted Cruz: (01:07)
At the same time, firearms in the home can be critical for defending the home. Can be critical for defending members of the family from violent crime. One example of that, that we will hear from today occurred on November 5th, 2017, when a vicious murderer walked into the sanctuary at Sutherland Springs First Baptist Church in Texas, and started shooting innocent churchgoers. Stephen Williford, who I’ve since gotten to know quite well and who will be a witness today.

Ted Cruz: (01:49)
Mr. Williford was a neighbor just down the street and he heard the shots and he went and got his weapon, just an AR-15 and he ran down the street and engaged with the shooter. And his heroism saved lives that day. His heroism was extraordinary. I can tell you, I was in that sanctuary the day after that shooting and it remains one of the most horrific things I’ve ever seen to stand in that beautiful church where a deranged madman committed an act of unspeakable evil.

Ted Cruz: (02:28)
Mr. Williford’s weapon was secured in a gun safe and the time it took for him to remove it from the gun safe, slowed down his response time. And one of the challenges that we all face as a slowed down response time in an instance like that can mean the difference between people living and people dying. All across the country, people relying on quick access to firearms in their homes to defend themselves. A 2013 report ordered by the Obama administration CDC stated that, “Almost all national survey estimates indicate the defensive gun uses by victims are at least as common as offensive uses by criminals. With estimates of annual uses ranging from 500,000 to more than three million.”

Ted Cruz: (03:26)
We’re not talking about one or two or a handful. This is the Obama administration estimating defensive uses of firearms. In other words, firearms used to prevent a crime occur somewhere between 500,000 and three million times a year. If our objective is to save lives and I believe all of us want to save lives, ensuring that people can effectively access their firearms to defend themselves and their families is critically important. And sometimes the defensive use includes children defending themselves and defending their families.

Ted Cruz: (04:07)
For example, earlier this year, a twelve-year-old boy in Goldsboro, North Carolina shot two masked intruders killing one of them after they forcefully entered his home and shot the boy’s grandmother. In 2018, a 15-year-old girl, who was also from North Carolina and who had been trained on how to shoot and safely handle firearms, grabbed a gun hidden in her house for protection and shot her mother’s abusive boyfriend after he had attacked her mother and threatened to kill her.

Ted Cruz: (04:46)
If the firearms that these miners had used to defend themselves and their families had been inaccessible, the consequences could very well have been devastating. So when we talk about safe storage, we have to keep in mind that restricting quick and ready access to a firearm potentially comes at a serious cost to people’s lives. We should be encouraging people to make responsible choices that balance the risk of accidents with the need for self defense. And that’s exactly what many of the voluntary programs across the country have been doing. For example, Project ChildSafe run by the National Shooting Sports Foundation provides gun locks free of charge.

Ted Cruz: (05:34)
I will tell you, this is an issue on which there can be bipartisan cooperation. When it comes to Project ChildSafe, it’s so happens that I have a very personal history with that project because in the years 1999 and 2000, I was a policy staffer working on the George W. Bush presidential campaign. And as a policy staffer responsible for domestic policy, I was the 28, 29-year-old staffer who designed the very first Project ChildSafe and drafted the briefing paper and presented it to then Governor Bush.

Ted Cruz: (06:11)
Governor Bush agreed and campaign for president in 2000 on Project ChildSafe on providing gun locks free of charge to the millions of Americans who don’t have gun locks so that they can better protect themselves, their families, their children, the friends of their children. That project ended up being announced, campaigned upon, and when George W. Bush was elected, implemented and today, Mr. Bertozzi works very directly with it. I have to say it is encouraging now the millions of child locks that have been given out that came from an idea a 29-year-old kid had sitting in a cubicle that has since been implemented.

Ted Cruz: (07:03)
Critical to that is that it is voluntary. That it is providing child locks so you have the equipment free of charge so that cost is not a barrier to being able to lock a firearm, but it is not mandatory. I believe people can and should make a judgment about what the needs of their home, of their neighborhood, of protecting their family are. The bill that Senator Blumenthal has, I think goes too far in terms of mandating a federal rule for everyone.

Ted Cruz: (07:42)
For example, the bill would prevent a family with teenage children in a crime ridden neighborhood from choosing to keep a firearm somewhere where it could be quickly and easily accessed for self-defense. It would empower the federal government to enforce that law coming into the family’s home and potentially arresting the parents and seizing the firearms. Not only that, it would make it a federal crime for the children I mentioned earlier, the children who defended their homes and defended their families with a firearm to have access to the weapons that saved them and their loved ones.

Ted Cruz: (08:26)
I don’t think that makes sense. I don’t think that’s an approach and by the way, whether or not children have access to firearms, I think varies widely, depending upon the age and maturity of the child. It is a different thing for a parent of a 16 or 17-year-old child at home who’s trained on how to handle a firearm, making the decision that that child should be able to defend himself or herself in the case of a violent intruder, than it is to allow elementary school kids to play with loaded firearms.

Ted Cruz: (09:02)
There’s a full spectrum that responsible parents should make judgements of when it is appropriate and when it is not appropriate to put a minor in a position to be able to defend himself or herself. All of us want to prevent firearm accidents. It is tragic. It is horrific. I can tell you in our home, our girls are 10 and 13 and our firearms are locked away and they don’t have access to them because we’re not at a point where we think that is a reasonable judgment to make. But I don’t know that there would never be a point where we would make the judgment that it makes sense to give them access to it if needed.