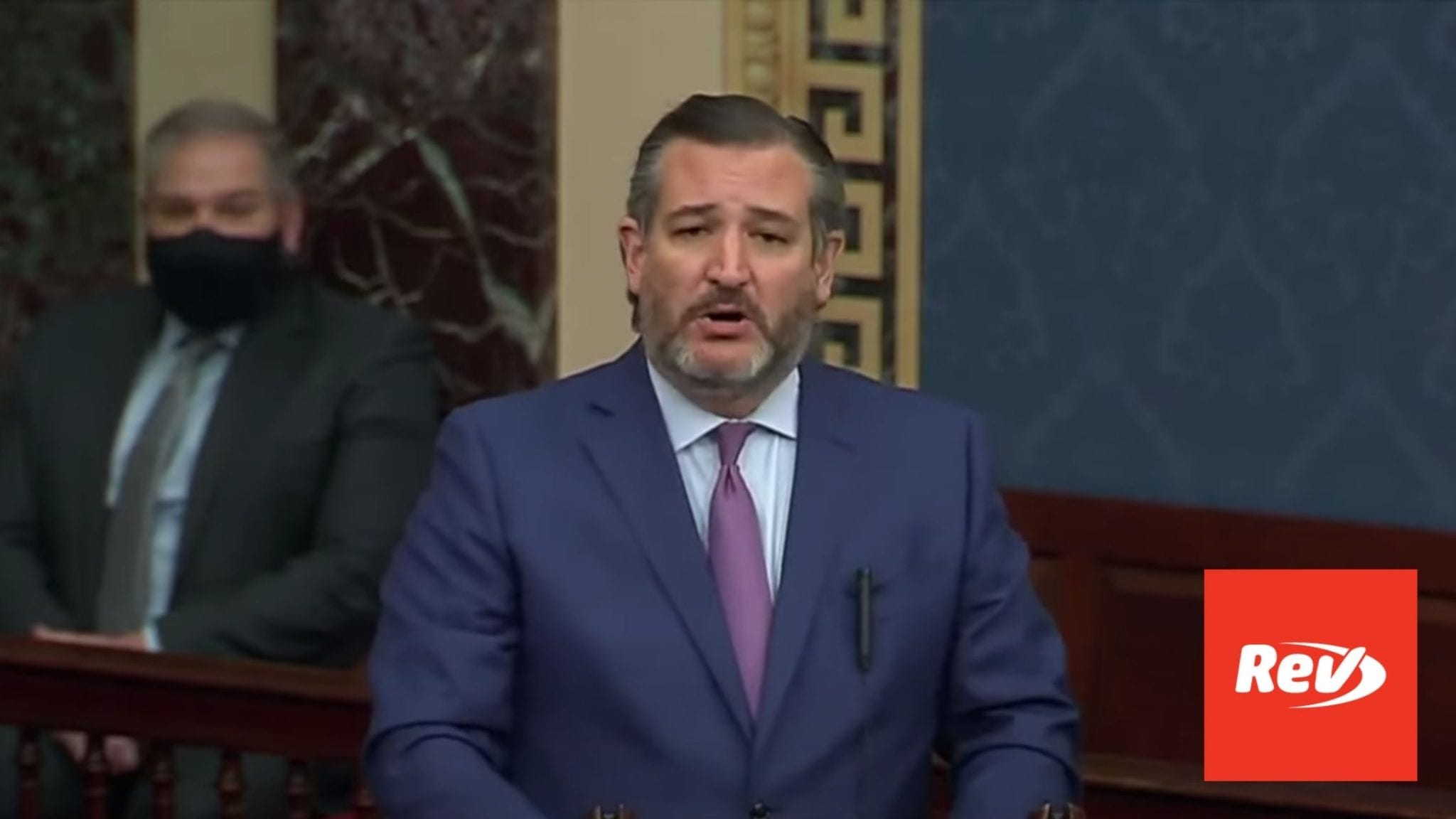 Texas Senator Ted Cruz spoke about claims of election fraud and his reasoning for opposing the electoral count. Read the transcript of his Senate floor speech here.

Ted Cruz: (00:10)
We gathered together at a moment of great division, at a moment of great passion. We have seen a no doubt we’ll continue to see, a great deal of moralizing from both sides of the aisle. But I would urge to both sides perhaps a bit less certitude, and a bit more recognition that we are gathered at a time when democracy is in crisis. Recent polling shows that 39% of Americans believe the election that just occurred, “was rigged.” You may not agree with that assessment. But it is nonetheless a reality for nearly half the country. I would note it is not just Republicans who believe that. 31% of independence agree with that statement. 17% of Democrats believe the election was ripped. Even if you do not share that conviction, it is the responsibility, I believe of this office to acknowledge that as a profound threat to this country and to the legitimacy of any administrations that will come in the future.

Ted Cruz: (01:36)
I want to take a moment to speak to my Democratic colleagues. I understand. Your guy is winning right now. If Democrats vote as a block, Joe Biden will almost certainly be certified as the next president of the United States. I want to speak to the Republicans who are considering voting against these objections. I understand your concerns, but I urge you to pause and think, what does it say to the nearly half the country that believes this election was rigged if we vote? Not even to consider the claims of illegality and fraud in this election.

Ted Cruz: (02:20)
And I believe there’s a better way. The leaders just spoke about setting aside the election. Let me be clear, I am not arguing for setting aside the result of this election. All of us are faced with two choices, both of which are lousy. One choice is vote against the objection. And tens of millions of Americans will see a vote against the objection as a statement that voter fraud doesn’t matter, isn’t real and shouldn’t be taken seriously. And a great many of us don’t believe that.

Ted Cruz: (02:49)
On the other hand, most, if not all of us believe we should not set aside the results of an election just because our candidate may not have prevailed. And so I endeavored to look for door number three, a third option. And for that, I look to history to the precedent of the 1876 election, the Hayes Tilden election where this Congress appointed an electoral commission to examine claims of voter fraud, five house members, five senators, five Supreme Court justices, examined the evidence and rendered a judge judgment.

Ted Cruz: (03:24)
And what I would urge of this body is that we do the same. That we have pointed electoral commission to conduct a 10-day emergency audit, consider the evidence, and resolve the claims. For those on the democratic aisle who says, say there is no evidence, they’ve been rejected, then you should rest and comfort if that’s the case. An electoral commission would reject those claims. But for those who respect the voters, simply telling the voters, go jump in a lake. The fact that you have deep concerns is of no moment to us, that jeopardizes, I believe the legitimacy of this in subsequent elections.

Ted Cruz: (04:09)
The constitution gives to Congress the responsibility this day to count the votes. The framers knew what they were doing when they gave responsibilities to Congress, we have a responsibility. And I would urge that we follow the precedent of 1877. The Electoral Count Act explicitly allows objections such as this one for votes that were not regularly given.

Ted Cruz: (04:36)
And let me be clear, this objection is for the State of Arizona, but it is broader than that. It is an objection for all six of the contested states to have a credible, objective, impartial body, here are the evidence, and make a conclusive determination. It would benefit both sides. That would improve legitimacy of this election.

Ted Cruz: (05:00)
And so let me urge my colleagues. All of us take our responsibilities seriously. I would urge my colleagues, don’t take perhaps the easy path. But instead act together. Astonish the viewers and act in a bipartisan sense to say, “We will have a credible and fair tribunal. Consider the claims, consider the facts, consider the evidence.” And make a conclusive determination, whether and to what extent this election complied with the constitution and with federal law.