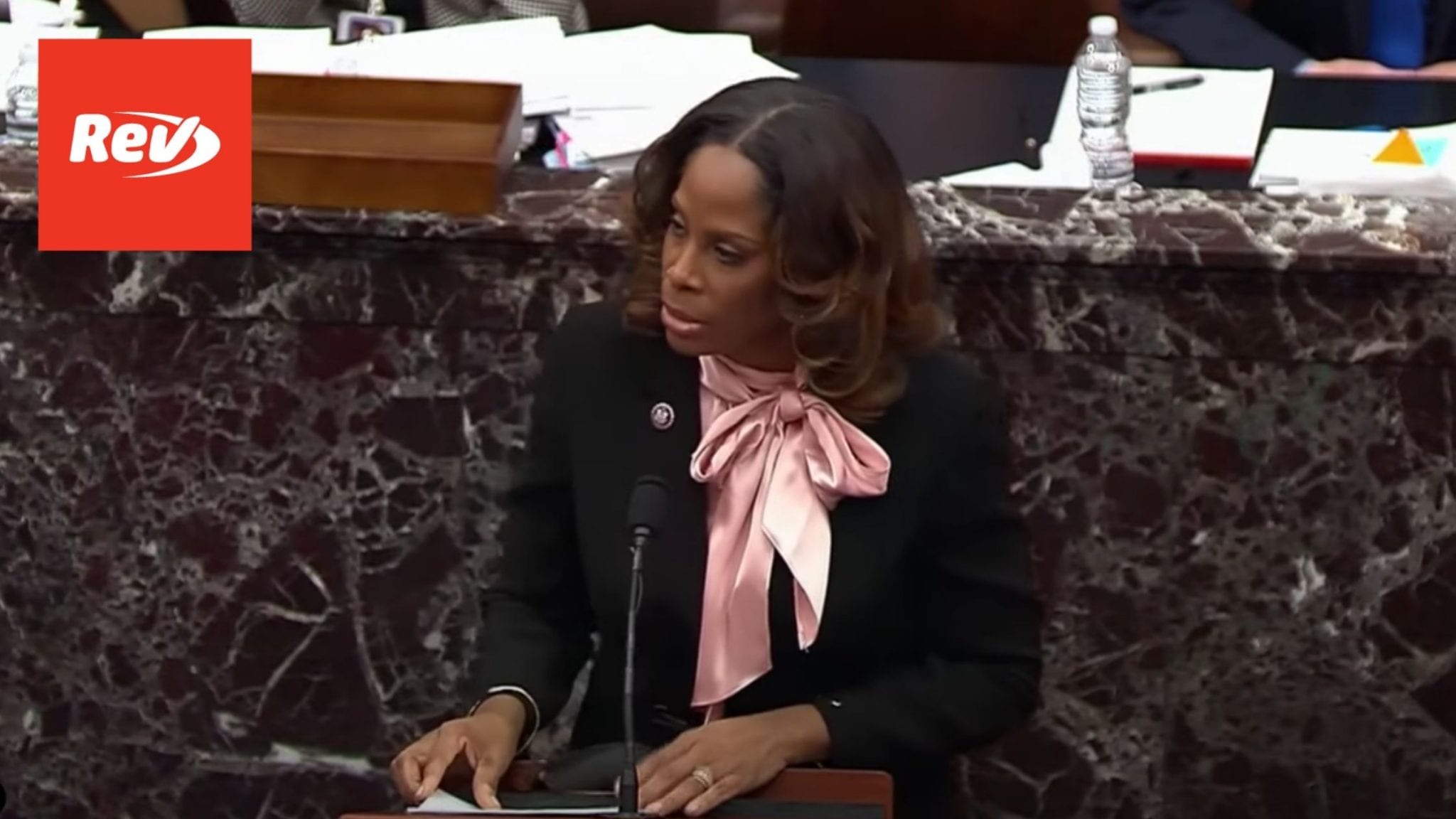 Del. Stacey Plaskett responded to a question on the message the outcome of Trump’s impeachment trial will send to future lawmakers on February 12, 2021. Read the transcript of her remarks during the impeachment trial here.

Speaker 2: (00:04)
Mr. President, on behalf of myself and senators Casey and Brown I send a question to the desk.

Speaker 1: (00:45)
So a question from Senator Klobuchar, Senator Casey, Senator Brown to the house managers, the clerk will report

Speaker 3: (01:01)
In presenting your case, you relied on past precedents from impeachment trials, such as William Belknap’s impeachment. After what you have presented in the course of this trial, if we do not convict former President Trump, what message will we be sending to future presidents and congresses?

Stacey Plaskett: (01:45)
As we [inaudible 00:01:46] President Trump engaged in a course of conduct that incited an armed attack on the Capitol. He did so while seeking to overturn the results of the election and thwart the transfer of power.

Stacey Plaskett: (02:01)
And when the attack began, he further incited violence aimed to his own vice-president, even as demonstrated his state of mind by failing to defend us and the law enforcement officials who protect us.

Stacey Plaskett: (02:16)
The consequences of his conduct were devastating on every level. Police officers were left overwhelmed, unprotected, Congress had to be evacuated. Our staff barricaded in this building, calling their families to say goodbye.

Stacey Plaskett: (02:33)
Some of us like Mr. Raskin had children here. And these people in this building, some of whom were on the FBI’s watch list, took photos, stole laptops, destroyed precious statues, including one of John Lewis. Desecrated the statue of a recently deceased member of Congress who stood for nonviolence.

Stacey Plaskett: (03:03)
This was devastating, and the world watched us, and the world is still watching us, to see what we will do this day, and will know what we did this day, 100 years from now. Those are the immediate consequences and our actions will reverberate as to what are the future consequences.

Stacey Plaskett: (03:32)
The extremists who attack the Capitol at the president’s provocation will be emboldened. All our intelligence agencies have confirmed this. It is not house manager saying that. There are quite literally standing by and standing ready. Donald Trump told them, this is only the beginning. They are waiting and watching, to see if Donald Trump is right, that everyone said this was totally appropriate.

Stacey Plaskett: (04:08)
Let me also bring something else up. I’ll briefly say, that defense councils put a lot of videos out in their defense playing clip after clip of black women talking about fighting for a cause or an issue or a policy. It was not lost on me so many of them were people of color, and women, and black women. Black women, like myself who are sick and tired of being sick and tired for our children. Your children, our children.

Stacey Plaskett: (04:50)
This summer things happened that were violent, but there were also things that gave some of us black women great comfort. Seeing Amish people from Pennsylvania, standing up with us, members of Congress fighting up with us. And so I thought we were past that. I think maybe we’re not.

Stacey Plaskett: (05:14)
There are long standing consequences, decisions like this that will define who we are as a people, who America is. We have in this room made monumental decisions. You all have made monumental decisions. We’ve declared wars, past civil rights acts, ensured that no one in this country is a slave. Every American has the right to vote, unless you live in a territory.

Stacey Plaskett: (05:47)
At this time, some of these decisions are even controversial, but history has shown that they define us as a country, and as a people. Today is one of those moments, and history will wait for our decision.