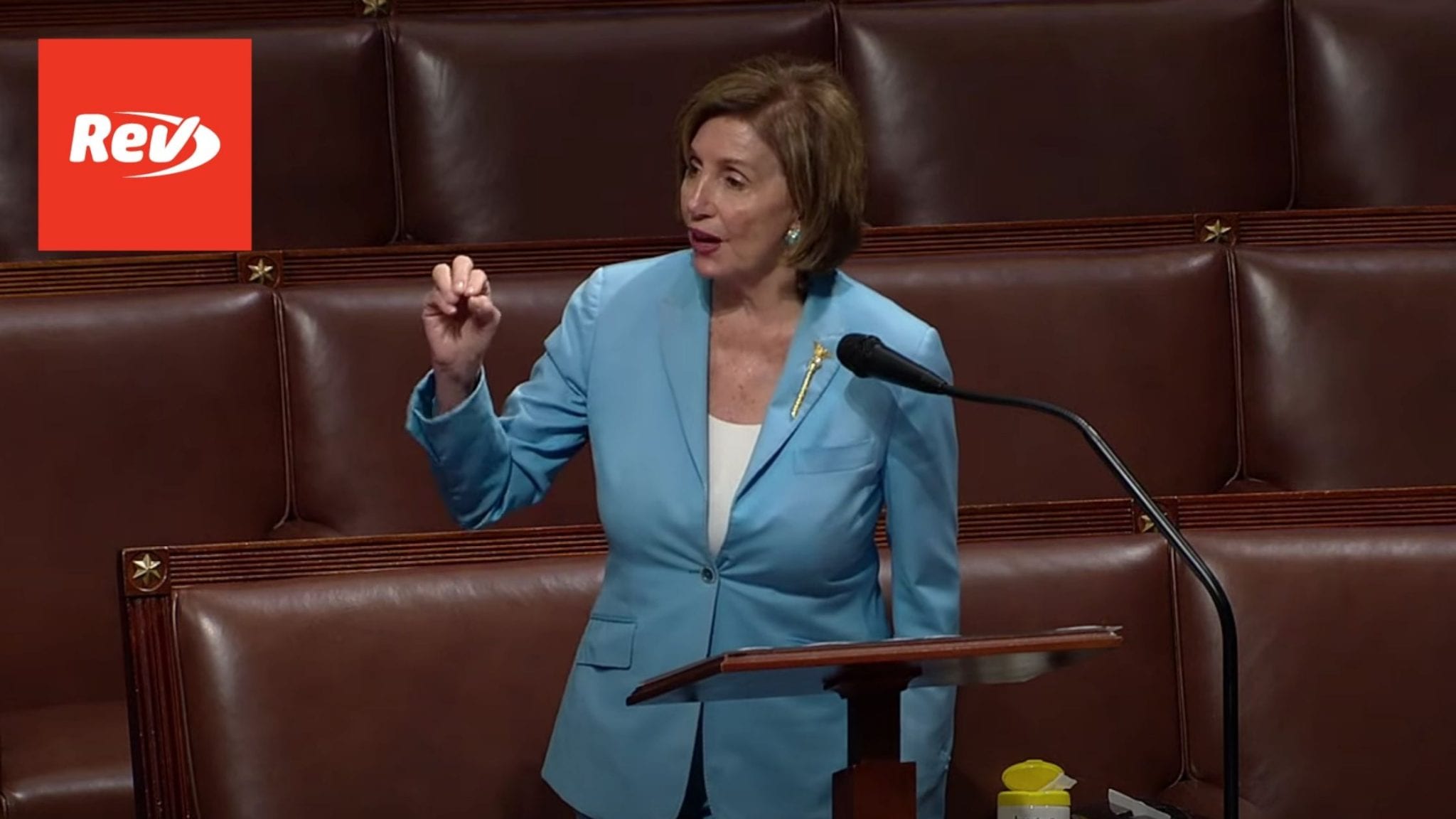 House Speaker Nancy Pelosi gave a speech on the House floor on May 19, 2021 to urge the passage of legislation that would create a commission to investigate the January 6 attack on the U.S. Capitol. Read the transcript of the speech remarks here.

Nancy Pelosi: (00:02)
Thank you, Mr. Speaker. I thank the gentlemen for yielding and I thank him for his great leadership working with ranking member Katko on bringing this bi-partisan legislation to the floor for a bipartisan commission. Let’s talk about where we are, here we are in the Capitol of the United States. The dome of the US Capitol has always been a beacon of democracy and hope to America and to the world. Under this dome, our nation has abolished slavery, secured equal protections for all, ended a Civil War, enfranchised women, established Medicare and Medicaid, voting rights, civil rights, and met the needs of the American people.

Nancy Pelosi: (00:51)
Under this dome, school children learn about their country’s history and what we are doing to advance their future. They come here, they see us honor those who have contributed to the success of our country, Washington, Lincoln, so many, Jefferson, etc. But they know that our founders, those patriots, wanted us to be working for a better future as we honor our history.

Nancy Pelosi: (01:22)
Under this dome, again, when children learn about our country’s history, they learn also about what we are doing for their futures. Legislators pass law, press engages with our democracy, reporting on it. Staff and workers enable all of this to happen. This dome is a symbol of the determination of America, but this was not always so.

Nancy Pelosi: (01:47)
Let us recall that the dome of the Capitol was built during the Civil War, as our country was riven by a brutal conflict. At the time, many said the iron and steel used for construction were needed for the war effort. They urged the president not to continue the work on the dome, but President Lincoln said no. He knew that our country needed a symbol of strength and unity, a reminder of the shared ideals and common purpose that built our nation. A beacon of hope to guide us through times of darkness. And he knew, that the work must continue as a sign of our strength and the unity of our country.

Nancy Pelosi: (02:30)
Sadly, Mr. Speaker, on January 6th and the days, weeks and months after the Capitol dome was once again such a beacon. Would we prevail? January 6th was the day called for in the constitution to validate the presidential election. It was not just another day in the life of Congress. That day, one of the darkest days in our history, our temple of democracy was under assault by insurrectionist. The gleeful desecration of our Capitol resulted in multiple deaths, physical harm to over 140 members of law enforcement and terror and trauma amongst staff, workers, and even members.

Nancy Pelosi: (03:46)
Thanks to the courage of the Capitol police, members and support workers, we showed the country and indeed the world that we would not be diverted from our duty, that we would respect our responsibility to the Constitution of the United States. We take that oath to protect and defend the constitution. Again, in a bipartisan way we agreed to come back to the Capitol.

Nancy Pelosi: (04:13)
Today, over four months later, many questions regarding the circumstances of this assault on our democracy and the response to it remain. It is imperative that we seek the truth of what happened on January 6th. And to do that, Congress must, in a spirit I believe in bipartisanship and patriotism, establish an independent bi-partisan 9/11 type commission.

Nancy Pelosi: (04:37)
Today, thanks to the leadership of chairman Bennie Thompson and ranking member John Katko, legislation to create such a commission is on the House floor. It’s important to note, Mr. Speaker, that this is happening four and a half months after the January 6th insurrection. My colleagues, do you know, many of you were not here at the time, but legislation establishing the 9/11 commission was not signed into law… 9/11, mind you, 9/11, 2001, was not signed into law until the end of November, 2002, over 14 months after the attacks.

Nancy Pelosi: (05:23)
So people have been saying, “How come we don’t have a commission?” Well, it takes time to build the bipartisanship, come to agreement. And let us hope that the leadership that Mr. Thompson and Mr. Katko have demonstrated will be leadership that we will follow, that we will continue in the most bipartisan way in order to seek the truth.

Nancy Pelosi: (05:46)
Today, after four months later, many questions regarding the circumstances still exist. This commission is designed to be impartial and experienced. The legislation requires that the commissioners be quote “Prominent United States citizens with national recognition and significant depth of experience.” It also indicates that they should not be members of Congress or [inaudible 00:06:18] elected another capacity.

Nancy Pelosi: (06:20)
Commissioners will be appointed from the highest echelons of government service, law enforcement, civil rights, civil liberties, and privacy, the armed forces, intelligence, counter-terrorism, cyber security, technology and law. The commission will be, again, bi-partisan and bicameral with commissioners appointed by the majority leaders and the majority and minority leadership in the House and Senate.

Nancy Pelosi: (06:48)
And it will be actionable and effective, culminating in a final report on the facts and causes of January 6th, along with recommendations to prevent further attacks on our democratic institutions. I heard you earlier, Mr. Chairman, acknowledge the support and endorsement of the previous chairs of the 9/11 commission, Governor Kean and Chairman in the Congress Lee Hamilton, co-chairs of the 9/11 Commission.

Nancy Pelosi: (07:19)
They also had written to us earlier on about the need for such a bipartisan commission. But they also wanted, not only to find out the truth so this doesn’t happen again, but also to reinforce our commitment to democracy and take us on a path that is better and more unifying. And that’s a responsibility we have. And that is a hope that I have emerging from this debate, this vote today, that we will be able to have a strong bipartisan vote that takes us down a path more unifying for our country. We have this opportunity.

Nancy Pelosi: (07:59)
My colleagues, the press says to me, “Why don’t you just go do your own task force, your own select committee to investigate this? You have the votes, you have the subpoena power, you have this or that.” I said, “I don’t want to do that.” We want this to be, as it is shaped, bipartisan with shared responsibility, shared staff in a way that the public will have respect for the outcome.

Nancy Pelosi: (08:30)
To that end, 140 national security leaders have calls for such a commission, write in, and this is what they’ve said. “The events of January 6th exposed severe vulnerabilities in the nation’s preparedness for preventing and responding to a domestic terrorist attack. The immediate security failings that permitted such a lethal breach of the Capitol complex by armed extremists, raise serious questions and demand immediate solutions. A failure to deploy the full suite of available tools to fully understand January 6th and addressed its causes will leave the Capitol and the nation vulnerable to future attacks.”

Nancy Pelosi: (09:09)
These are lists of nonpartisan, 140 Democrats, Republicans, I don’t even know what part party some of them are. Without objection, I would like to submit their statement for the record, Mr. Chair.

Nancy Pelosi: (09:25)
After the bipartisan agreement on this commission was reached the respected bipartisan chairs of the 9/11 commission, Thomas Kean and Lee Hamilton, endorsed it, as was mentioned by the Chairman as I referenced earlier. I want to repeat, because I think it bears repetition, “We very strongly urge House members to support H.R. 3233, the Bipartisan National Commission to investigate the January 6 Attack on the United States Capitol Complex. That bill would create a 9/11 style commission to investigate the January 6 assault on the US Capitol. That was a dark day in American history, one of the darkest.

Nancy Pelosi: (10:06)
“As chairman and vice chairman of the 9/11 commission, unity of purpose was key to the effectiveness of this group. We put country above party, without bias, the events before, during, and after the attack. We saw to understand our vulnerabilities in order to prevent future attacks or future acts of terrorism.” The Chair and [inaudible 00:10:27] chair went on to say, “Today, democracy faces a new threat. The January 6 attack on the United States Capitol was one of the darkest days in the history of our country. Americans deserve an objective and accurate account of what happened.” They said, Mr. Hamilton and Governor Kean, “As we did in the wake of 9/11, it’s time to set it aside partisan politics, come together as Americans in common pursuit of truth and justice.”

Nancy Pelosi: (10:59)
As I said earlier, Mr. Speaker, the Capitol of the United States has always been a glorious beacon of democracy for the American people and for the world. This legislation is about something larger even than the commission, vital as the commission is. This legislation is about our democracy, about ensuring that the Capitol dome remains a symbol of freedom. About preserving America’s role as the emblem of resilience, determination and hope to the world. Indeed, creating this commission sends a resounding message to terrorists both at home and abroad the commitment of the United States Congress to the Constitution and to the American people is unshakeable.

Nancy Pelosi: (11:42)
In establishing the truth of January 6th, this commission will protect our temple of democracy and our democracy itself, and it will ensure that such an attack shall never happen again. Can you just not wait, my colleagues, for a time very soon when children come here to learn or the press can cover in a more open way, where the American people can come into the People’s House. That’s what this chamber has been called. The People’s House, come to witness the debate that affects their lives. And whatever our disagreement about policy, that they are assured that we are unified in our commitment in honoring our Constitution, respecting the institution in which we serve.

Nancy Pelosi: (12:35)
With that, I urge a strong bipartisan vote for H.R. 3233, to establish the National Commission to Investigate the January 6 Attack on the United States Capitol Complex. And I do so with the greatest appreciation, respect, to Chairman Bennie Thompson and to ranking member Katko. And hope, again, that the spirit of bipartisanship that they engendered in bringing this legislation to the floor will only grow as we go forward with the commission and with its recommendations. With that, Mr. Chairman, I yield back the balance of my time.