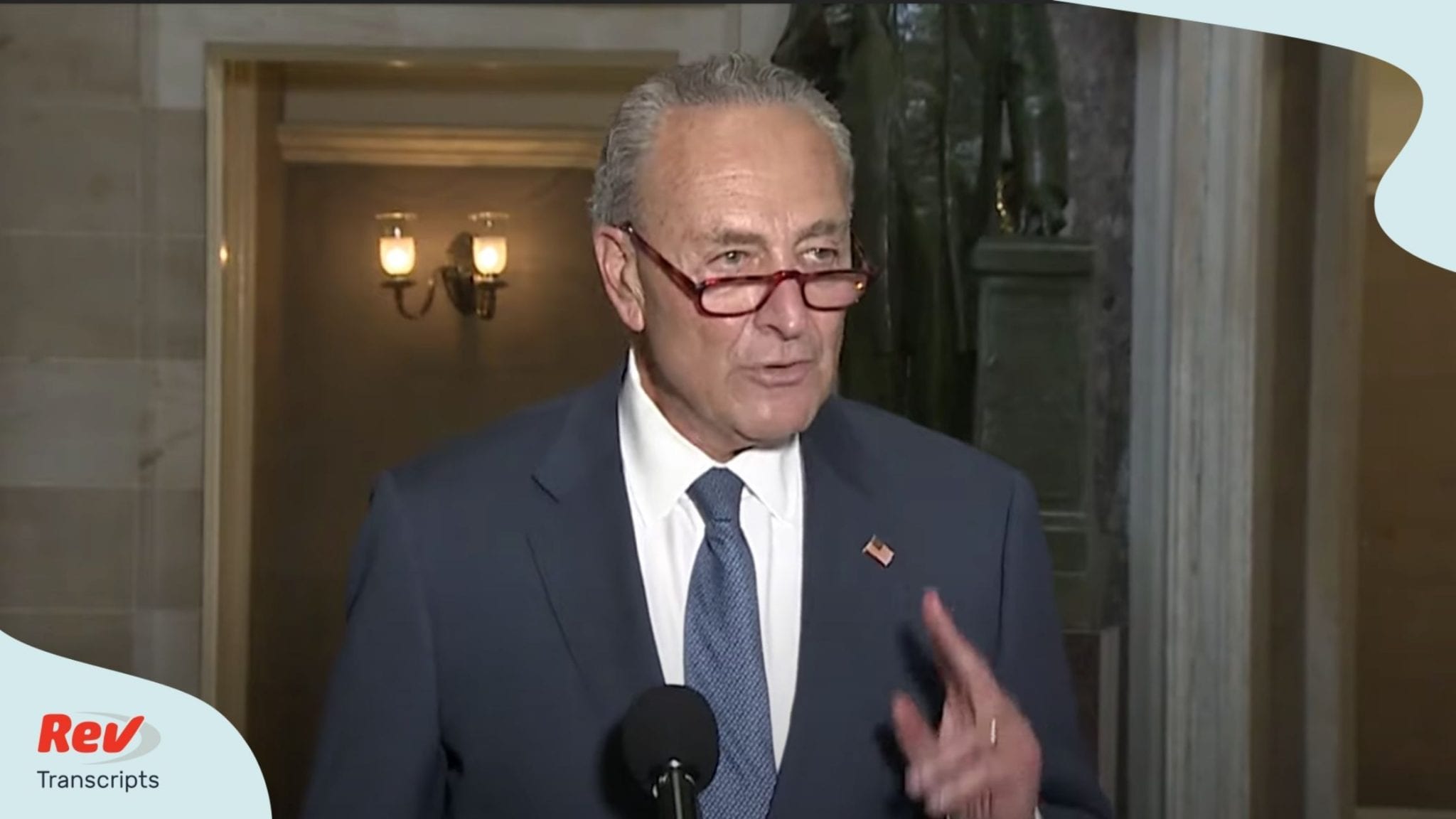 House Speaker Nancy Pelosi and Senate Minority Leader Chuck Schumer gave an update on stimulus talks with Republicans on August 7. Senator Schumer said it “was a disappointing meeting”. Read the transcript of the update.

Chuck Schumer: (00:00)
… for coming. It was a disappointing meeting. We reiterated in very strong terms our offer, we come down a trillion from our top number, which is three, four. They go up a trillion from their top number, which was one, and that way we could begin to meet in the middle. Unfortunately, they rejected it. They said they couldn’t go much above their existing 1 trillion, and that was disappointing. The bottom line is very simple: there are only really two choices. There are only two choices for them. Negotiate with Democrats and meet us in the middle. Don’t say it’s your way or no way. And if we do that, we can accomplish a whole lot of things.

Chuck Schumer: (01:18)
So we’re we’re asking them again, to be fair, to meet us in the middle, not to have a, my way or the highway attitude, which they seem to have. And we can really get this done because there are some areas where we didn’t come to agreement on that many things, but we narrowed our differences and saw where each other was. So we’re hopeful that they will think about it and come back and tell us they’re willing to meet us halfway.

Nancy Pelosi: (01:49)
Thank you, Mr. Leader. As you were speaking and in these meetings, I always think about the children. When people ask me, what are the three most important issues facing the Congress? I always say the same thing. Our children, our children, our children. Their health, their education, the economic security of their families, a health and safety place for them to live and thrive, a world at peace in which they can reach their fulfillment.

Nancy Pelosi: (02:14)
The first four of those are in this legislation: their health, their health. It’s disappointing that now, that today marks the 12th week since we passed the Heroes Act. Central to it is how that we can open our economy, open our schools safely and the rest. Since that time, 12 weeks ago, three and a half million people have been added to the list of those infected. Since we passed our bill, three and a half million people and 70,000 have died that same time.

Nancy Pelosi: (02:56)
Mitch McConnell said, pause. He pushed the pause button. If we had acted in a closer time then, so many lives and livelihoods would have been saved. So the health of our children and the health of our children depends on having access to food. There are millions of food insecurity children in America. And that’s one of the places where we had a big difference. We had $67 billion for food and utility costs, and most of it food. They had $250,000. So we’re far apart, yes. Can we find some common ground? Yes. Can we cut back on our number, not cut back on the number of children who are fed, but for how long the legislation lasts. I just say that to give you an example of how far apart we are and how we can make a change.

Nancy Pelosi: (03:57)
Our children and their education, what is more sacred to us than sending our children, in my case, grandchildren now to school in a safe way? We all want our children to go to school. Children want to go and be with their friends. Parents need them to go so that they can go to work and teachers want to be honoring their vocation, teaching children. But we cannot subject our children to risk of being sick, contrary to what the secretary of education said is, “Astronauts take risks. Why shouldn’t children take risks?”

Nancy Pelosi: (04:33)
See what we’re dealing with. And their proposal that they put forth, the money largely overwhelmingly going to schools that were opening up, while we’re seeing most schools in the country are virtual or hybrid, some opening up, some undecided yet. Because they want to see how much money they have, because it makes a difference how much money you have. Now, it’s interesting to them and they did not know that hybrid some virtual, some in person. In person, actual and virtual cost about the same amount of money.

Nancy Pelosi: (05:13)
So why on earth was the president saying, “Unless you take this money and open up, we’re not giving this money.” So we have a philosophical difference as well as amount of money difference. Our children, their health, their education, their housing. Housing has such a psychological impact on children and their wellbeing. Many families, millions of families actually, by one estimate, 12.9 million families face eviction, face eviction. President may do a moratorium. It takes more than moratorium, it takes money. It takes money and they had to be convinced of that. So this takes time. There other things, the economic security of their families, economic security of their families, and that of course is impacted by how much money we put out there for America’s working families, those unemployed. Very important to all of this: the health, the education, the economic security of our children’s families are the state and local governments.

Nancy Pelosi: (06:23)
That’s why we honor our heroes with the sources that are there. Healthcare workers, first responders, teachers, transportation, sanitation, food workers, who meet the needs of people. Whatever we do with the education from the federal government is minor compared to what state and local government invest in education. You cut that, you’re cutting education. You cut access for the healthcare, millions of people will be fired. More than a half million have already been fired at state and local level and expectation is 3.6 more. So when we have these debates, it is rooted in the wellbeing of our children, the kitchen table, issues of their families. This isn’t about tax policy or whatever other kinds of philosophical argument. This is about a safety net for our children, just as we have a safety net for the markets.

Nancy Pelosi: (07:25)
The markets are doing well, they have their safety net. Let’s have that, because the safety net is not just for the children, it’s for our whole economic system. Pay now, or pay later, we have to do so much more now. This morning was a disappointing, I don’t care what rose they try to pin on it, it’s got a lot of thorns. And that’s because 4 million jobs in June, 1.8 in July, it’s fading. And the 4 million, and even the 1.8 are because of the major investments that we have made. We need to make more. Everybody tells us again, pay now, pay later and pay bigger in terms of the health, the lives, the livelihood, and the life of our democracy, as the distinguished leader has referenced. So when we talk about this, this isn’t about negotiating or leverage or anything, it’s about meeting the needs of the American people. Can we trim back some of the timing it goes for X number of …

Nancy Pelosi: (08:32)
We fully expect to be able to correct all of that in a short period of time anyway. But I’ve told them come back when you are ready to give us a higher number. If I just made depart for a moment, Mr. Chairman. We had two victories. Last night, we won in court on the attempt by the part of the Republicans to challenge the proxy voting here. They took it to court. We won that. And then today in the McCann case, there was a district court on bonk. That means the whole court wrote, it was seven to two in favor of the House having standing in order to bring the case. They were trying to defeat us on standing, and now the case will be heard. So we were pretty happy about our court decisions as we go along. I just wanted to share that with you.

Nancy Pelosi: (09:30)
Perhaps you missed what I said. I said, “Come back when you’re ready to give a higher number.”

Chuck Schumer: (09:35)
No, in answer to your question, we asked them, had they talked to president Trump about this? They said, “Yes.” But we said, “We hope he’ll change his mind.” Because we do want to come to an agreement, very much so. But it’s got to be an agreement, as the speaker said, that meets the needs of kids. And not just, they say my way or no way, because we can’t with that number, meet the needs of workers, of teachers, of schools, of all of these things. And even when they do, if they were to do and they didn’t mention it in the room, an executive order, it didn’t come up. It’s not going to be done in as good a way. You can’t do unemployment benefits in as good a way as you can legislatively. You can’t do payroll tax cut, which even the Republicans are against, if you don’t do it legislatively.

Chuck Schumer: (10:25)
All these things. You can’t do student loans. Some forbearance, if you can’t do it legislatively, because you can’t spend the money, as I understand it. You just have to delay it. You think a small business person is going to want to pay 12 months or six months of payroll tax all at once, six months from now? So we were asking them, “Come back and negotiate, but realize, our house is democratic. They need a majority of democratic votes in the Senate. Meet us in the middle. God sakes, please. For the sake of America, meet us in the middle. Don’t say, ‘My way or no way.'” Which is what they’re saying. They don’t want to come off their number.

Chuck Schumer: (11:13)
That can’t pass the Senate with Republicans.