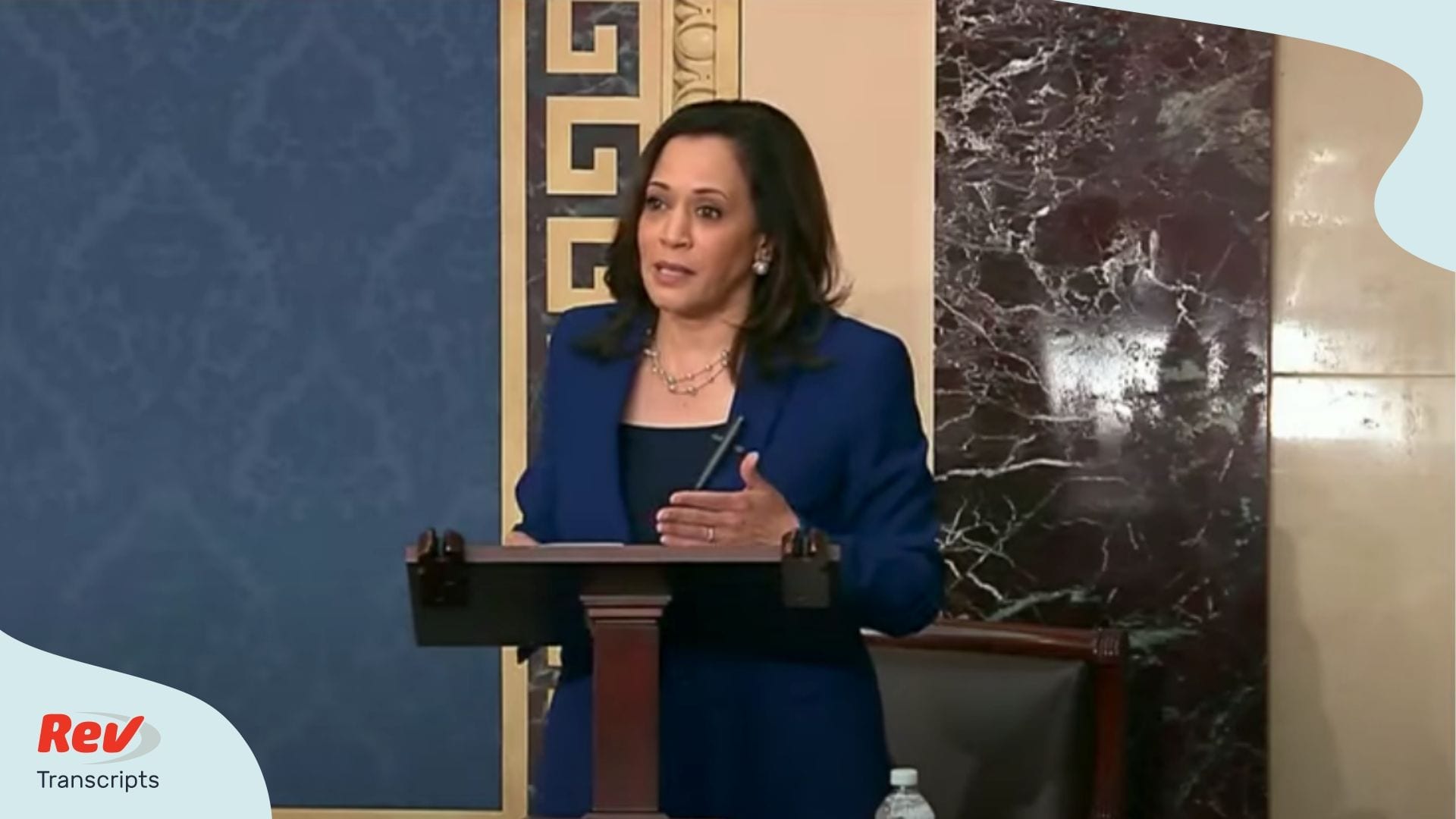 Senator John Cornyn: (00:01)
Madam president, would the Senator yield for a question?

Senator Kamala Harris: (00:04)
When I’m finished I will. The Republican bill does not even provide a baseline for a discussion or amendment on police reform in that there are no mechanisms to hold law enforcement officers accountable in court for their misconduct. There is no transparency into police misconduct, which is necessary, of course, to enable communities to hold officers accountable. There is no requirement of data collection on all use of force incidents or on racial or religious profiling. There is no ban on harmful policing policies and practices such as racial and religious profiling, no knock warrants in drug cases. We’re not banning all no knock warrants, no knock warrants in drug cases because Breonna Taylor would be alive today had that been the case. Choke holes, carotid holds, no reform of those issues in the Republican bill that’s being offered, and there’s no national standard for use of force. So I’m happy to entertain the question from the Senator from Texas, and then I’ll conclude my comments.

Senator John Cornyn: (01:18)
Thank you, Madam president. I wonder if the Senator would tell me the bill that the police act that it sounds like are the democratic conference intends to block tomorrow includes the anti-lynching legislation that you and Senator Booker have championed. Are you aware of that?

Senator Kamala Harris: (01:38)
The same one that Rand Paul obstructed a couple of weeks ago?, Yes I am aware of that?

Senator Kamala Harris: (01:49)
Absolutely not and I think that it is important that we not distract the American people from the task at hand. We cannot pull out a specific component of this bill and leave everything else in the garbage bin. That is the logical and actual and practical conclusion of where you’re going with the suggestion that we would sacrifice issues like no knock warrants, issues like national standard for use of force, issues like the need for independent investigations of police misconduct, issues like pattern and practice investigations with subpoena power for the United States Department of Justice in sake of one. It’s like asking a mother, save one of your children and leave the others.

Senator John Cornyn: (02:44)
Madam President, will the Senator yield for another question.

Senator John Cornyn: (02:45)
Madam President the Senator certainly is familiar with the rules of the Senate, which allows senators to offer amendments to improve legislation once we get on it, but if the democratic conference is going to prevent the Senate from actually getting on the bill, there’s no opportunity for anyone, any Senator, you or any one of us, to offer amendments to improve it. And I would further ask the Senator, aren’t you aware of the fact that there are 60 vote thresholds on the back end so that if we get on the bill and you don’t like the way it turns out, that you can block it on the back end, but is the Senator where of those options that she has?

Senator Kamala Harris: (03:23)
Well, Senator Cornyn, you and I both serve, and we are honored to serve on the Senate Judiciary Committee as does Senator Booker, Senator Durbin. We all serve on the Judiciary Committee. The two Senate authors of this bill serve with you on the Senate Judiciary Committee. As you know, because we’ve been present together during our most recent hearings, we have asked that there would be a meaningful discussion of the Justice and Policing Act in that committee. None has occurred. So if we’re going to talk about process, let us look at all the tools that are available to well-intentioned, well-meaning legislators if the goal is actually to solve and address the issue at hand. I’ve seen no evidence of that. I’ve seen no evidence of… In fact, what I’ve seen reading some of the newspapers, sometimes they get things wrong, but if they got it right, the Senate leader said that he has no interest in engaging in that kind of discussion or debate before putting the bill on the floor for a vote tomorrow.

Senator John Cornyn: (04:25)
Madam President, may I ask one last question of the Senator? What I’m trying to fathom Madam President is why the Senator would rather have these negotiations occur behind closed doors as opposed to here on the floor of the Senate for the American people to see broadcast on television. Don’t you think that sort of interaction and debate and negotiation out in front of all 330 million Americans would be beneficial to healing our country and coming to some consensus about what the appropriate reforms should be.

Senator Kamala Harris: (05:11)
Indeed, that is the beauty of the Judiciary Committee. Our meetings are public meetings.

Senator Kamala Harris: (05:24)
I will now conclude my remarks by saying that I do believe now is the time for Congress to pass legislation that will bring real change and real improvement. It is time that we meet this moment and meet the movement that we are seeing outside of these doors. We are seeing people of every race, gender, and age, and religion marching together in unison as Americans. We are seeing people putting their bodies on the line in the face of more excessive force and tear gas to stand for equality for all people. The bill that is being offered for vote tomorrow does not in any way meet the needs of this moment, and the long standing needs America has had for reform. I will therefore join Senator Schumer and Booker in not only sending a letter to Senator McConnell this morning demanding that the Senate vote on the Justice and Policing Act, but I will say that I fully intend to vote against the motion to proceed until, and unless, we as a body are prepared to offer meaningful, meaningful reforms upon which we can debate.

Senator Kamala Harris: (06:36)
But I will say also that one of the other problems with what is being offered by our colleagues across the aisle is it is not meeting the moment in terms of the need for reform. It is simply… It is basically they’ve constructed a confessional where there can be a confession of misdeeds after the fact, and that in no way meets the moment in terms of reforms that are necessary, and so in the words of my… Immortal words of my great uncle, Sherman, God rest his soul, “That dog don’t hunt.” Thank you.