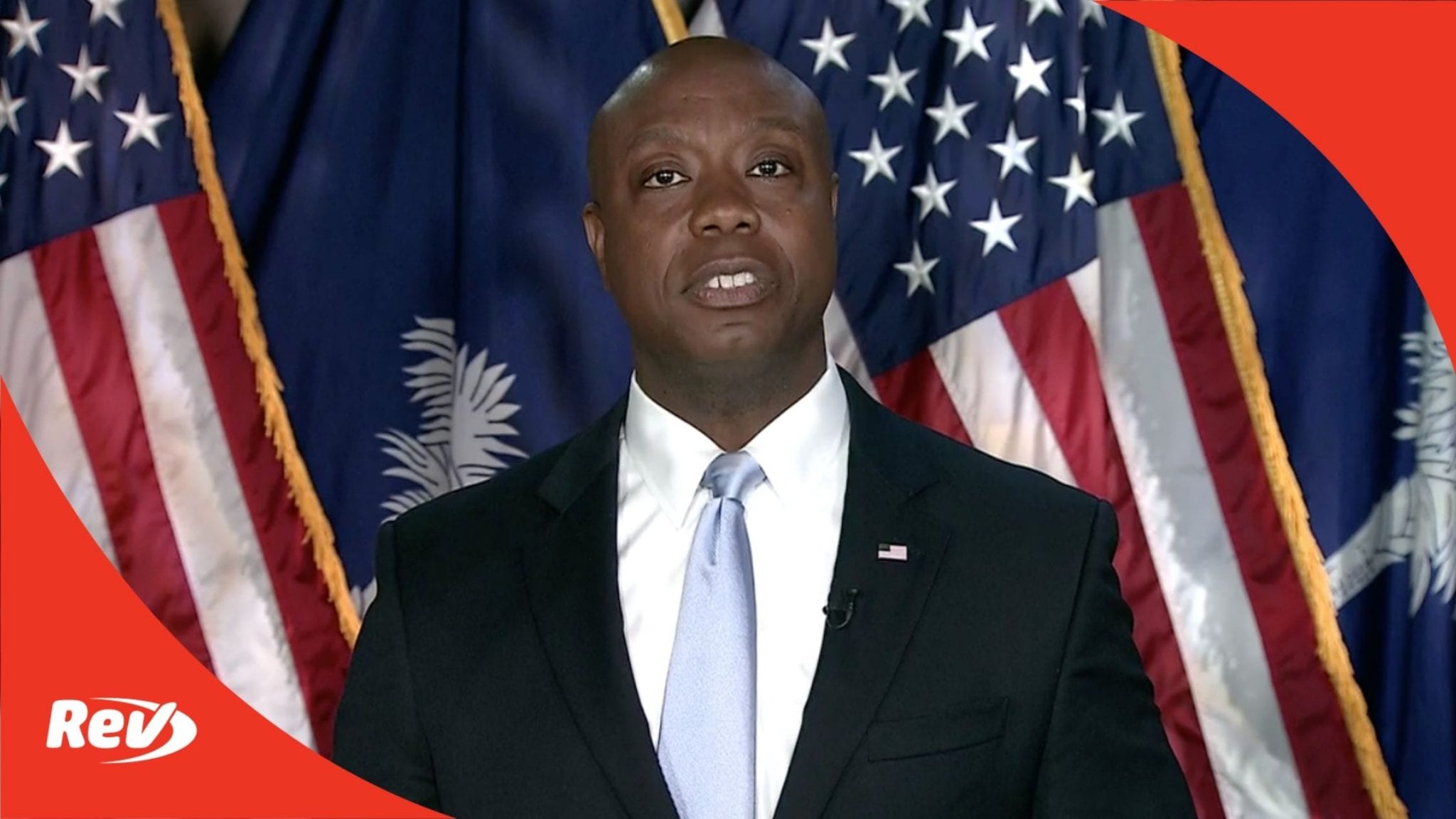 Senator Tim Scott delivered the Republican response to Joe Biden’s address to a joint session of Congress on April 28, 2021. He said: “America is not a racist country.” Read the full transcript of his speech here.

Senator Tim Scott: (00:23)
He promised to unite a nation to lower the temperature, to govern for all Americans, no matter how we voted. This was the pitch. You just heard it again. But our nation is starving for more than empty platitudes. We need policies and progress that brings us closer together. But three months in, the actions of the president and his party are pulling us further and further apart.

Senator Tim Scott: (00:49)
I won’t waste your time with finger-pointing or partisan bickering. You can get that on TV anytime you want. I want to have an honest conversation about common sense and common ground, about this feeling that our nation is sliding off its shared foundation and how we move forward together.

Senator Tim Scott: (01:07)
Growing up, I never dreamed I would be standing here tonight. When I was a kid, my parents divorced. My mother and my brother and I moved in with my grandparents, three of us sharing one bedroom. I was disillusioned and angry and I nearly failed out of school, but I was blessed.

Senator Tim Scott: (01:28)
First with a praying mama. And let me say this to the single mothers out there who are working their tails off, working hard, trying to make the ends meet, wondering if it’s worth it. You can bet it is. God bless your amazing effort on part of your kids. I was also blessed by a Chick-fil-A operator, John Moniz, and finally, with a string of opportunities that are only possible here in America.

Senator Tim Scott: (02:00)
This past year, I’ve watched COVID attack every rung of the ladder that helped me up. So many families have lost parents and grandparents too early. So many small businesses have gone under. Becoming a Christian transformed my life, but for months too many churches were shut down. Most of all, I’m saddened that millions of kids have lost a year of learning when they could not afford to lose a single day. Locking vulnerable kids out of the classroom is locking adults out of their future.

Senator Tim Scott: (02:38)
Our public schools should have reopened months ago. Other countries did, private and religious schools did. Science has shown for months that schools are safe, but too often, powerful grownups set science aside and kids like me were left behind. The clearest case I’ve seen for school choice in our lifetimes, because we know that education is the closest thing to magic in America.

Senator Tim Scott: (03:34)
In February, Republicans told President Biden we wanted to keep working together to finish this fight, but Democrats wanted to go it alone. They spent almost $2 trillion on a partisan bill that the White House bragged was the most liberal bill in American history. Only 1% went to vaccinations, no requirement to reopen schools promptly. COVID brought Congress together five times. This administration pushed us apart.

Senator Tim Scott: (04:07)
Another issue that should unite us is infrastructure. Republican support everything you think of when you think of infrastructure: roads, bridges, ports, airports, waterways, high-speed broadband. We’re in for all of that. But again, Democrats want a partisan wishlist. They won’t even build bridges to build bridges. Less than 6% of the president’s plan goes to roads and bridges. It’s a liberal wishlist of big government waste, plus the biggest job killing tax hikes in a generation. Experts say when all is said and done, it would lower wages of the average American worker and shrink our economy.

Senator Tim Scott: (04:55)
Tonight, we also heard about a so-called family plan, even more taxing, even more spending, to put Washington even more in the middle of your life, from the cradle to college. The beauty of the American dream is that families get to define it for themselves. We should be expanding opportunities and options for all families, not throwing money at certain issues because Democrats think they know best.

Senator Tim Scott: (05:27)
Infrastructure spending that shrinks our economy is not common sense. Weakening our southern borders and creating a crisis is not compassionate. The president is also abandoning principles he’s held for decades. Now he says your tax dollars should fund abortions. He’s laying groundwork to pack the Supreme Court. This is not common ground.

Senator Tim Scott: (05:56)
Nowhere do we need common ground more desperately than in our discussions of race. I have experienced the pain of discrimination. I know what it feels like to be pulled over for no reason, to be followed around a store while I’m shopping. I remember every morning at the kitchen table, my grandfather would open the newspaper and read it, I thought. But later, I realized he had never learned to read it. He just wanted to set the right example.

Senator Tim Scott: (06:28)
I’ve also experienced a different kind of intolerance. I get called Uncle Tom and the N word by progressives, by liberals. Just last week, a national newspaper suggested my family’s poverty was actually privilege because a relative owned land generations before my time. Believe me, I know firsthand our healing is not finished.

Senator Tim Scott: (06:56)
In 2015 after the shooting of Walter Scott, I wrote a bill to fund body cameras. Last year, after the deaths of Breonna Taylor and George Floyd, I built an even bigger police reform proposal, but my democratic colleagues blocked it. I extended an olive branch. I offered amendments, but Democrats use a filibuster to block the debate from even happening. My friends across the aisle seemed to want the issue more than they wanted a solution. But I’m still working, I’m hopeful that this will be different.

Senator Tim Scott: (07:32)
When America comes together, we’ve made tremendous progress, but powerful forces want to pull us apart. 100 years ago, kids in classrooms were taught the color of their skin was their most important characteristic and if they looked a certain way, they were inferior. Today, kids are being taught that the color of their skin defines them again and if they look a certain way, they’re an oppressor. From colleges to corporations to our culture, people are making money and gaining power by pretending we haven’t made any progress at all by doubling down on the divisions, we’ve worked so hard to heal.

Senator Tim Scott: (08:14)
You know this stuff that’s wrong. Hear me clearly, America is not a racist country. It’s backwards to fight discrimination with different types of discrimination and it’s wrong to try to use our painful past to dishonestly shut down debates in the present.

Senator Tim Scott: (08:35)
I’m an African-American who’s voted in the south my entire life. I take voting rights personally. Republicans support making it easier to vote and harder to cheat, and so do the voters. Big majorities of Americans support early voting and a big majority support voter ID, including African-Americans and Hispanics. Common sense makes common ground, but today this conversation has collapsed.

Senator Tim Scott: (09:07)
The state of Georgia passed a law that expands early voting, preserves no excuse mail-in voting, and despite what the president claimed, did not reduce election day hours. If you actually read this law, it’s mainstream. It will be easier to vote early in Georgia than in Democrat-run New York, but the Left doesn’t want you to know that. They want people virtue signaling by yelling about a law they haven’t even read.

Senator Tim Scott: (09:39)
Fact checkers have called out the White House for misstatements. The president absurdly claims that this is worse than Jim Crow. What is going on here? I’ll tell you, a Washington power grab. This misplaced outrage is supposed to justify Democrat’s new sweeping bill that would take over elections for all 50 states. It would send public funds to political campaigns you disagree with and make the bipartisan Federal Elections Commission partisan.

Senator Tim Scott: (10:14)
This is not about civil rights or our racial past. It’s about rigging elections in the future. And no, the same filibuster that President Obama and President Biden praised when they were senators, the same filibuster that the Democrats used to kill my police reform bill last year has not suddenly become a racist relic just because the shoe is now on the other foot. Race is not a political weapon to settle every issue the way one side wants. It’s far too important.

Senator Tim Scott: (10:50)
This should be a joyful springtime for a nation. This administration inherited a tide that had already turned. The coronavirus is on the run. Thanks to Operation Warp Speed and the Trump administration, our country is flooded with safe and effective vaccines. Thanks to our bipartisan work last year, job openings are rebounding. So why do we feel so divided, anxious?

Senator Tim Scott: (11:19)
A nation with so much cause for hope should not feel so heavy-laden. A president who promised to bring us together should not be pushing agendas that tear us apart. The American family deserves better, and we know what better looks like. Just before COVID, we had the most inclusive economy in my lifetime, the lowest unemployment rates ever recorded for African-Americans, Hispanics, and Asians, and a 70 year low nearly for women. Wages were, hear me, wages were growing faster at the bottom than at the top. The bottom 25% saw their wages go up faster than the top 25%. That happened because Republicans focused on expanding opportunity for all Americans.

Senator Tim Scott: (12:12)
In addition to that, we’ve passed opportunity zones, criminal justice reform, and permanent funding for historically black colleges and universities for the first time ever. We fought the drug epidemic, rebuilt our military, and cut taxes for working families and single moms like the one that raised me. Our best future will not come from Washington schemes or socialist dreams. It will come from you, the American people.

Senator Tim Scott: (12:41)
Black, Hispanic, white, and Asian, Republican and Democrat, brave police officers and black neighborhoods, we are not adversaries. We are family. We are all in this together, and we get to live in the greatest country on earth. The country where my grandfather in his 94 years saw his family go from cotton to Congress in one lifetime. So I am more than hopeful, I am confident that our finest hour has yet to come.

Senator Tim Scott: (13:19)
Original sin is never the end of the story, not in our souls and not for our nation. The real story is always redemption. I am standing here because my mom has prayed me through some really tough times. I believe our nation has succeeded the same way because generations of Americans in their own ways have asked for grace and God has supplied it.

Senator Tim Scott: (13:49)
So I will close with a word from a worship song that really helped me through this past year of COVID. The music is new, but the words draw from scripture. May the Lord bless you and keep you, make his face shine upon you and be gracious to you. May his presence go before you and behind you and beside you. In your weeping and your rejoicing, he is for you. May his favor be upon our nation for 1,000 generations and your family and your children and their children. Good night, and God bless the United States of America.