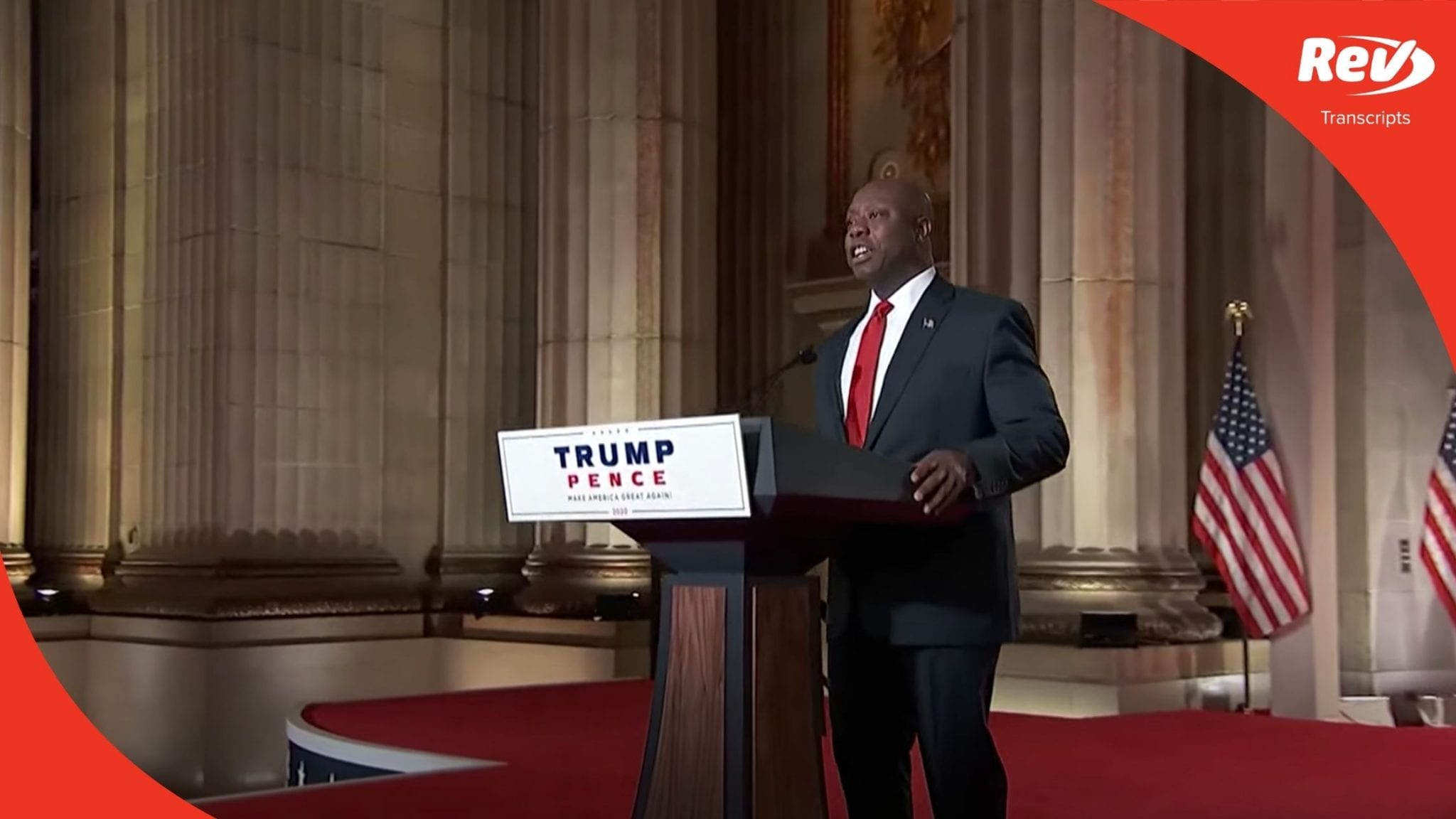 Senator Tim Scott gave a speech at Night 1 of the 2020 Republican National Convention on August 24, 2020. Read the full transcript of his speech here.

Tim Scott: (00:03)
Good evening. I’m Senator Tim Scott from the great state of South Carolina. To all of you tuning in and participating in the political process, God bless you. This isn’t how I pictured tonight, but our country is experiencing something none of us envisioned. From a global pandemic to the deaths of George Floyd and Breonna Taylor, 2020 has tested our nation in ways we haven’t seen for decades. But regardless of the challenges presented to us, every four years, Americans come together to vote, to share stories of what makes our nation strong and the lessons we have learned that can strengthen it further for our children and grandchildren.

Tim Scott: (00:43)
Because while this election is between Donald Trump and Joe Biden, it is not solely about Donald Trump and Joe Biden. It’s about the promise of America. It’s about you and me, our challenges and heartbreaks, hopes and dreams. It’s about how we respond when tackling critical issues like police reform, when Democrats called our work a token effort and walked out of the room during negotiations because they wanted the issue more than they wanted a solution. Do we want a society that breeds success, or a culture that cancels everything it even slightly disagrees with? .

Tim Scott: (01:24)
I know where I stand, because you see, I am living my mother’s American Dream. My parents divorced when I was seven years old. We lived in a two bedroom house with my grandparents, me, my mom and my brother sharing a room and a bed. My mom worked 16 hours a day to keep food on the table and a roof over our heads. She knew that if we could find the opportunity, bigger things would come. I thought I had to use football to succeed in life, and my focus on academics faded away. My freshman year, I failed out. I failed four subjects: Spanish, English, world geography, and even civics. Trust me though, after spending seven years in the Senate, I know I’m not the only one in Congress who failed civics.

Tim Scott: (02:15)
But even while I was failing the 9th grade, my mother always said to me, “Timmy, if you just shoot for the moon, even if you miss, you will be among the stars.” She never lost faith in me, even when I lost faith in myself. Because of her encouragement, I went to summer school and caught up. The next year I met my mentor, John Moniz, a Chick-Fil-A operator. John saw something in me that I could not see in myself and started teaching me valuable life lessons, Like having a job was a good thing, but creating jobs would be better. That having an income could change my lifestyle, but creating a profit could change my community. He planted the seeds of what would become Opportunity Zones. This initiative the President and I worked together on is bringing over $75 billion of private sector investment into distressed communities.

Tim Scott: (03:18)
I took those lessons to heart and started putting the pieces of my life together. I realized a quality education is the closest thing we have to magic in America. That’s why I fight to this day for school choice, to make sure every child in every neighborhood has a quality education. I don’t care if it’s a public, private, charter, virtual or home school. When a parent has a choice, their kid has a better chance, and the President has fought alongside me on that.

Tim Scott: (03:53)
Later in life, I started my own successful small business. That’s why I know it is critical for us to have a tax code that encourages growth. We actually saw revenues to the Treasury increase after we lowered taxes in 2017. Rest assured that Democrats do not want you to know that. After starting my business and spending time in local government, I decided to run for Congress in 2010. The district is based in Charleston, South Carolina where the Civil War started against a son of our legendary Senator, Strom Thurmond. You may be asking yourself how does a poor Black kid from a single parent household run and win a race in a crowded Republican primary against a Thurmond? Because of the evolution of the Southern heart. In an overwhelmingly white district, the voters judged me not the color of my skin but on the content of my character.

Tim Scott: (04:59)
We live in a world that only wants you to believe in the bad news, racially, economically and culturally polarizing news. The truth is our nation’s arc always bends back towards fairness. We are not fully where we want to be, but I thank God Almighty we are not where we used to be. We are always striving to be better. When we stumble, and we will, we pick ourselves back up and try again. We don’t give into cancel culture or the radical and factually baseless belief that things are worse today than in the 1860s or the 1960s. We have work to do, but I believe in the goodness of America, the promise that all men and all women are created equal. And if you’re watching tonight, I’m betting you do too.

Tim Scott: (06:00)
Over the past four years, we have made tremendous progress towards that promise. President Trump built the most inclusive economy ever. Seven million jobs created pre-COVID-19, and two-thirds of which went to women, African Americans and Hispanics. The first new major effort to tackle poverty in a generation, Opportunity Zones. We put hard earned tax dollars back in people’s pockets by cutting their taxes, especially for single parent households like the one I grew up in, cutting single mother’s taxes 70% on average. President Trump supported these tax cuts for those single moms and other working families and signed these policies into law, and our nation is better off for it.

Tim Scott: (06:56)
So I’m going to ask you, the American people, not to look simply at what the candidates say but to look back at what they’ve done. This election is about your future, and it is critical to paint a full picture of the records of Donald Trump and Joe Biden. Joe Biden said if a Black man didn’t vote for him, he wasn’t truly Black. Joe Biden said Black people are a monolithic community. It was Joe Biden who said poor kids can be just as smart as white kids. And while his words are one thing, his actions take it to a whole new level. In 1994, Biden led the charge on a crime bill that put millions of Black Americans behind bars. President Trump’s criminal justice reform law fixed many of the disparities Biden created and made our system more fair and just for all Americans.

Tim Scott: (07:59)
Joe Biden failed our nation’s historically Black colleges and universities, heaping blame on them as they fought to ensure our young folks had access to higher education. Once again, to clean up Joe Biden’s mess, President Trump signed into law historically high funding for HBCUs, as well as a bill to give them permanent funding for the first time ever. And now Joe Biden wants to come for your pocketbooks, unless you’re a blue state millionaire. I’m serious. That’s one of their solutions for the pandemic. They want more money you’re your pocket and give it to Manhattan elites and Hollywood moguls so they get a tax break.

Tim Scott: (08:49)
Republicans, however, passed President Trump’s once-in-a-generation tax reform bill that lowered taxes for single moms, working families and those in need. So when it comes to what Joe Biden says he’ll do, look at his actions. Look at his policies. Look at what he already did and did not do while he’s been in Washington for 47 years. Ladies and gentlemen, people don’t always see those failures because they think we’re having a policy debate on two sides of an issue. That is not what is happening. Our side is working on policy, while Joe Biden’s radical Democrats are trying to permanently transform what it means to be an American. Make no mistake: Joe Biden and Kamala Harris want a cultural revolution, a fundamentally different America. If we let them, they will turn our country into a socialist utopia, and history has taught us that path only leads to pain and misery, especially for hard-working people hoping to rise.

Tim Scott: (10:11)
Instead, we must focus on the promise of the American journey. I know that journey well. My grandfather’s 99th birthday would have been tomorrow. Growing up, he had to cross the street if a white person was coming. He suffered the indignity of being forced out of school as a third grader to pick cotton, and he never learned to read or write. Yet he lived to see his grandson become the first African American to be elected to both the United States House and Senate. Our family went from cotton to Congress in one lifetime, and that’s why I believe the next American century can be better than the last. There are millions of families like mine across this nation full of potential seeking to live the American Dream, and I’m here tonight to tell you that supporting the Republican ticket gives you the best chance of making that dream a reality. God Bless you, and Father, please continue blessing the United States of America. God bless.