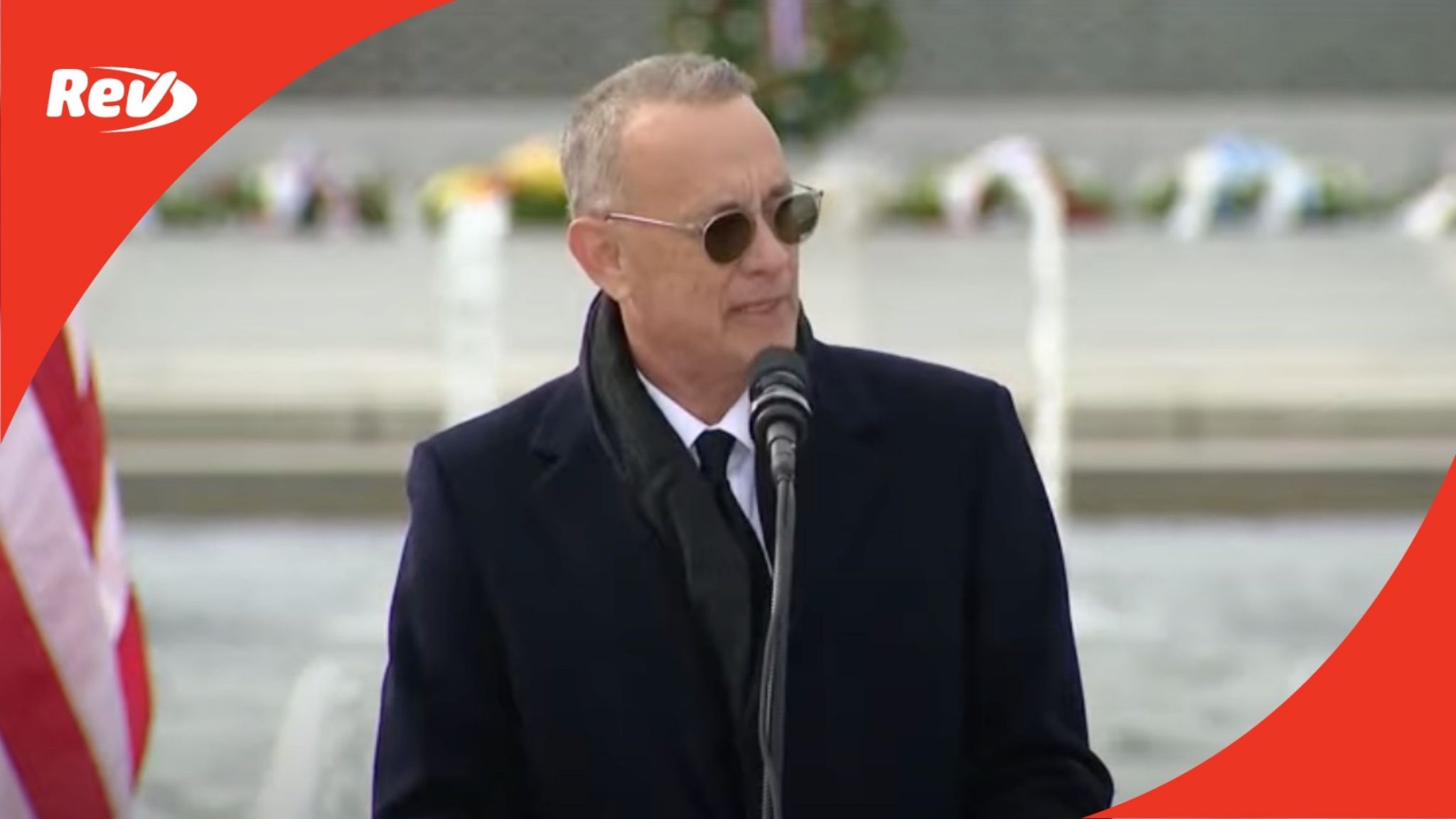 Tom Hanks: (00:05)
Good afternoon. Good afternoon, all. All of us assembled. Senator, one of the two senators. Which Senator called? Senator Dole. Answer the question. Wonderful to see you Robin. The Pacific Ocean and the Atlantic Ocean, the two theaters of conflict. 48 states at the time, and every American territory, totaling now 50 states. And still, a born part of America. To appreciate the life and the accomplishments of Bob Dole, simply look around at where we have gathered today at this national memorial to the Americans who gave their lives for the common good and the common cause of saving the world from tyrants. When Bob Dole fulfilled his duty in that war, which burned up half the world, the cost he paid was a hard one for him to bear. He lost the use of a limb and part of his once strong shoulders on a cold mountain side in Italy to an enemy that was trying to kill him. They failed. To recover, Bob Dole lay in a hard plaster body cast for 39 months, roughly 1,170 days, aided by all those who cared for the wounded veterans of that war.

Tom Hanks: (01:52)
He worked himself through the long, hard sessions of physical toil, just to be able to go about the routine motions of an average day. And yet he was never able again to button shirt or sign his name as he had. He saluted, and he made your acquaintance with his left hand. The folks from Russell, Kansas, they knew Bob Dole. And they knew the price he had paid, and they came forward to aid his recovery. Their nickels and dimes, the hard earned dollars they volunteered to do without were collected in cigar boxes, and made possible the rest of Bob Dole’s life of service. Who could ever forget such largesse, such support, such a loving effort to ease the hard work of a son of Kansas who had once been, yes, the best looking senior at Russell High School. Bob Dole never forgot them. Never. And if he was here today, the mention of those coins in a cigar box would reduce him to tears.

Tom Hanks: (03:20)
There are many great lessons to take away from Bob Dole’s life. Go to the other guy’s office so you can decide when the meeting is over, and get up and walk out. Speak straight, even when it gets you in trouble, because it will. But at least everyone will know how you stand and what you stand for. And always plan not just to win, but win big. Yes, you may try and fail, but you will not fail to try. And always, always remember how many structures in this city exist but for the efforts of one man. The national World War II Memorial was built over two White House administrations with the contributions of Americans like you. But it was Bob Dole who willed this Memorial into place. He pushed the idea, he corralled the votes. He made the phone calls, he enlisted allies, all of us in the cause. And he raised the money. He did all but mix the concrete himself, which he may have done had he had the use of that right arm.

Tom Hanks: (04:59)
This Memorial stands in this rightful site because Bob Dole remembered. He remembered the nearly half a million souls who, unlike him, never came home from the Second World War. He remembered the years of service the surviving Americans had invested. Yet this Memorial was not built only for the generation it honors anymore than it was erected to crow of their victory. Bob Dole called this a memorial to peace, so that all generations would remember that peace is achieved in shared labor, by shared sacrifice, by volunteering for the shared duty if peace is to be won. And if we Americans are to continue our pursuit of a more perfect nation in an imperfect world.

Tom Hanks: (06:01)
Now there are other great Americans who are remembered by memorials on this wide, long patch of grain here in our capitol. Places that hold the essence of their honor and their ethos, of their character and their efforts. Places where we feel a part of them, of all that they did and all that they tried to do. A bit of their presence when we visit. Bob Dole came to this plaza often to remember, to talk with veterans like himself, and to their posterity, by greeting them with a shake of his left hand. The memory and conscience of the man himself will always be here, right here, for as long as there is an America. And that is a good thing, because here we will always remember Bob Dole.