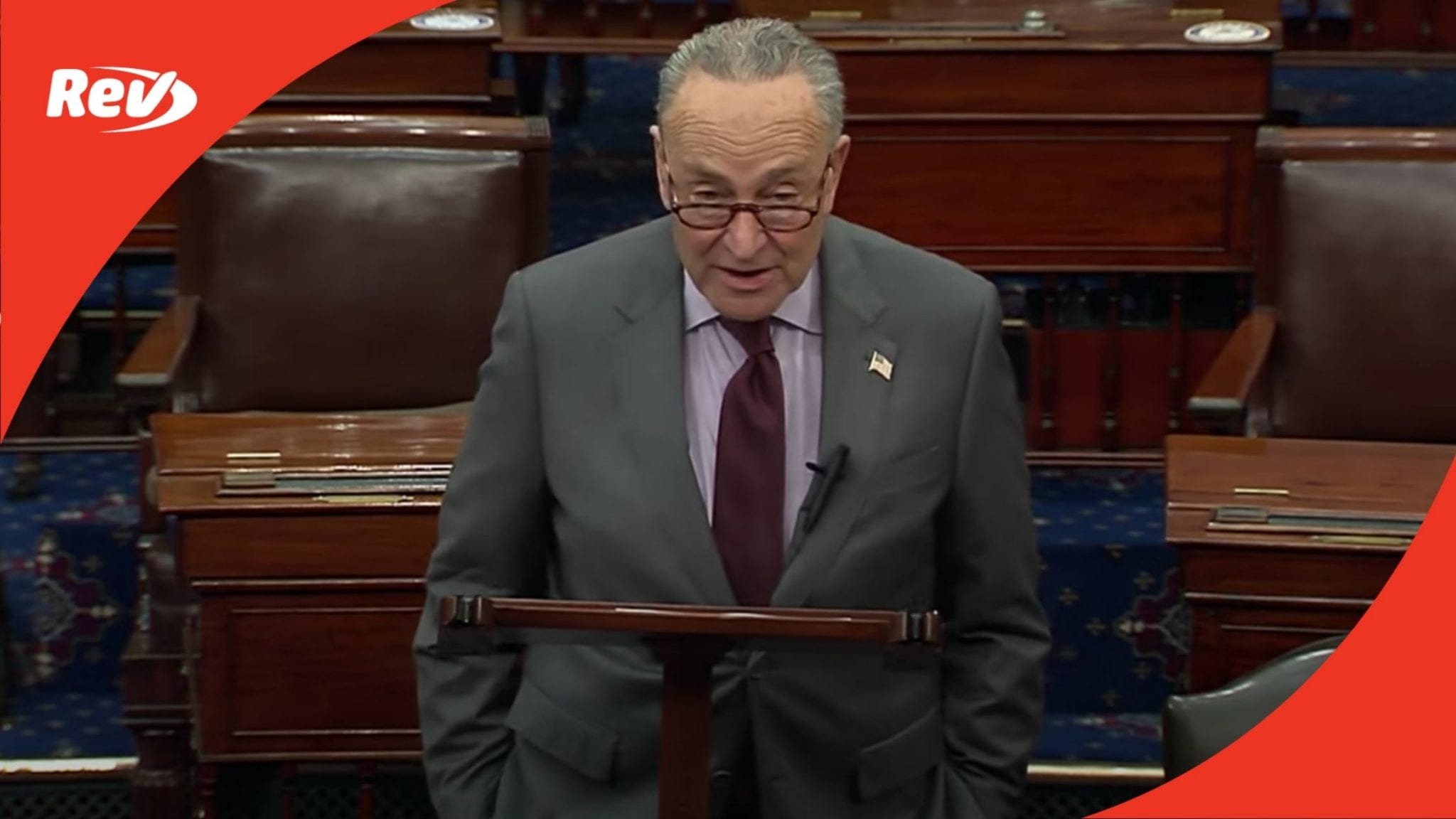 Senate Majority Leader Chuck Schumer spoke on the Senate floor on January 22, 2021. He announced that the articles of Trump’s impeachment will be delivered to the Senate on Monday. Read the transcript of his full speech remarks here.

Senator Schumer: (00:04)
The Senator from Vermont.

Speaker 2: (00:06)
The majority leader is recognized, the Senator from New York.

Senator Schumer: (00:09)
Now, Mr. President, it came to our attention last night that members of the National Guard, after standing on duty to protect the Capitol for inauguration day, keeping us safe, were sleeping in parking garages and cramped quarters without proper space or ventilation. It was utterly unacceptable. I have told those who run the security of the Capitol that it can never happen again, and I pledge to every National Guard member that it will not happen again. The minute I heard about this outrage last night, we made sure it was fixed immediately. Every member of the Guard was found proper accommodations inside. And as of this morning, everyone was accounted for and taken care of.

Senator Schumer: (00:56)
This morning, I went over to the CDC and I spoke to a number of guardsmen personally, to make sure they were okay. I want to thank Senators Hassan, Duckworth, Kelly and Heinrich for their work on this matter last night, as well as Senator Lujan, who went around late at night to make sure things were okay as well. And I want to thank all the members who were concerned and lent a hand. I also want to particularly thank acting Sergeant at Arms, Jennifer Hemingway, who, when we told her about this situation, patrolled the floors of the Capitol complex until past 3:00 AM to ensure that no one was left behind or not where they belonged. And she was back at her desk first thing today to follow up. We owe an enormous debt of gratitude to the men and women who worked to keep us safe on January 6th and the days since. A situation like last night will never happen again.

Senator Schumer: (01:58)
Now, I’ve spoken about the Senate’s agenda for the next several weeks. We have three essential items on our plate. One, the confirmation of President Biden’s cabinet and other key officials. Two, legislation to provide desperately needed COVID relief. Three, a second impeachment trial of Donald Trump. The Senate must and will do all three, COVID relief, confirmation of nominees, and impeachment trial. Now the first order of business is to fulfill our constitutional duty, to advise and consent on the president’s appointments to his cabinet.

Senator Schumer: (02:40)
This morning, the Senate will vote to confirm President Biden’s nominee for Secretary of Defense, Lloyd Austin. Mr. Austin will be the first African-American to ever helm the Defense Department in its history, a powerful symbol of the diversity and history of America’s armed forces. Mr. Austin has a storied career in the army, but those days are behind him. As Secretary of Defense, he promised to empower and lift up his civilian staff, and I believe he will be an outstanding Secretary of Defense for everyone at the Pentagon, service members and civilian employees alike. The Secretary of Defense, of course, has a hugely important task ahead of him. He must once again demonstrate to the world that the US military will always support our friends, deter our adversaries, and if necessary defeat them. Lloyd Austin is the right person for the job. He has the experience, the vision and the competence to run the largest agency in our government. I look forward to confirming his nomination shortly.

Senator Schumer: (03:51)
Afterwards, the Senate must continue to install President Biden’s team by confirming Secretaries of State, Homeland Security and Treasury. We need Republican cooperation to confirm these nominees, but we expect that cooperation to continue. The continuity of our national security, military and intelligence policy, as well as our ability to effectively respond to the current health and economic crises depend on having these cabinet officials confirmed.

Senator Schumer: (04:25)
Now, as I mentioned, the Senate will also conduct a second impeachment trial for Donald Trump. I’ve been speaking to the Republican leader about the timing and duration of the trial, but make no mistake, a trial will be held in the United States Senate, and there will be a vote on whether to convict the president. I’ve spoken to Speaker Pelosi, who informed me that the articles will be delivered to the Senate on Monday. Now I’ve heard some of my Republican colleagues argue that this trial would be unconstitutional because Donald Trump is no longer in office, an argument that has been roundly repudiated, debunked by hundreds of constitutional scholars left, right and center, and defies basic common sense. It makes no sense whatsoever that a president or any official could commit a heinous crime against our country and then be permitted to resign, so as to avoid accountability and a vote to disbar them from future office. It makes no sense.

Senator Schumer: (05:31)
Regardless, the purveyors of this unusual argument are trying to delay the inevitable. The fact is the House will deliver the article of impeachment to the Senate. The Senate will conduct a trial of the impeachment of Donald Trump. It will be a full trial. It will be a fair trial, but make no mistake, there will be a trial. And when that trial ends, Senators will have to decide if they believe Donald John Trump incited the insurrection against the United States.

Senator Schumer: (06:08)
Now over the course of elections in November and January, the American people chose to retire four Republican Senators and elect a Democratic majority to the Senate. The Senate must now take the basic step of passing an organizing resolution and setting up the rules for a Senate where there are 50 members of either party. Luckily we have a clear precedent for what to do in this situation. In 2001, then majority leader Lott and minority leader Daschle came together and agreed on a set of rules to govern a 50-50 Senate. We should follow that precedent. We have offered to abide by the same agreement. The last time there was a 50-50 Senate, what’s there is fair. That is precedent.

Senator Schumer: (07:03)
We could organize the Senate today, if both sides agreed to abide by the same rules as last time. The Republican leader, however, has made an extraneous demand that would place additional constraints on the majority, constraints that have never been in place before. In fact, his proposal would remove a tool that the Republican leader himself used twice in just the last Congress to accelerate the confirmation of Republican nominees. Leader McConnell’s propos- sorry, leader McConnell’s proposal is unacceptable and it won’t be accepted. And the Republican leader knew that when he first proposed it.

Senator Schumer: (07:44)
Only two days ago, Mr. President, we celebrated the inauguration of a new president and the turning over of a new leaf. The American people want us to work together and move past the meaningless political fights and gridlock that have plagued us for too long. It’s time to get to work. The first step is for the Republican caucus to agree to follow the same precedent that governed the Senate last time around. I yield the floor.