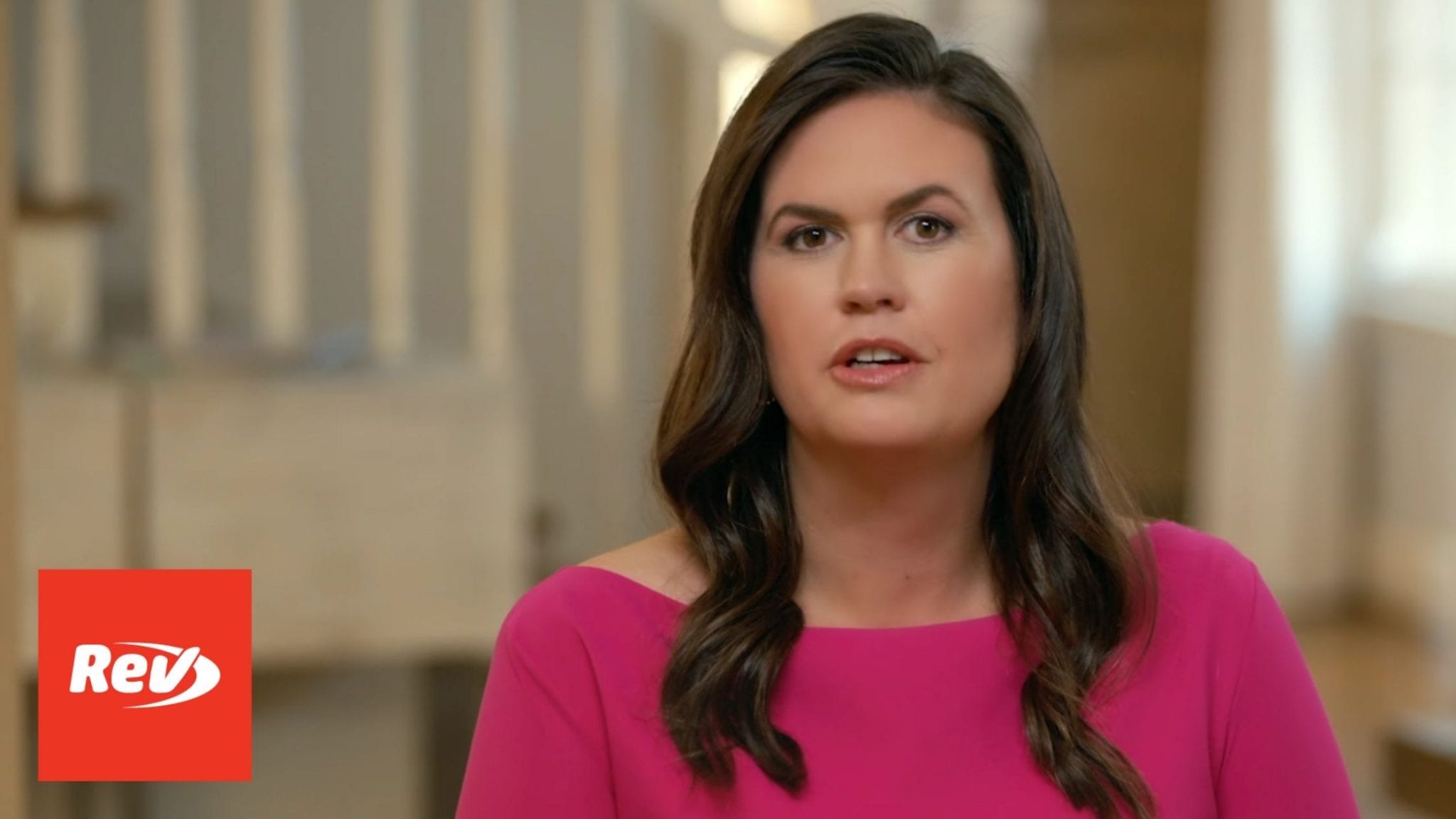 Sarah Huckabee Sanders announced her candidacy for governor of Arkansas on January 25, 2021. Read the transcript of her announcement video here.

Sarah Huckabee Sanders: (00:02)
In the pitch black of night, with no lights on the plane or runway, Air Force One touched down and war-torn Iraq. Nearby, hundreds of troops had gathered at a remote military base in the desert to celebrate Christmas. They expected to be joined by senior military leadership, but instead got their commander-in-chief, the room erupted.

Sarah Huckabee Sanders: (00:25)
A young soldier yelled from the back of the room, “Mr. President, I re-enlisted in the army because of you.”

Sarah Huckabee Sanders: (00:31)
And the president reply, “And son I’m here because of you.”

Sarah Huckabee Sanders: (00:36)
That soldier then came over to me and said, “Thank you, Sarah. I love the way you handle yourself, you I have a tough job.”

Sarah Huckabee Sanders: (00:43)
I politely corrected him and told him, “Thanks, but I take questions. You take bombs and bullets; that’s a tough job.”

Sarah Huckabee Sanders: (00:52)
The soldier silently reached up and tore the brave rifles patch from his arm and handed it to me and said, “We’re in this together.” Overwhelmed with emotion and speechless, I just hugged him with tears in my eyes and a grateful heart for our heroes who keep us free. America is great because we are free. But today our freedom and the rule of law are under attack.

Sarah Huckabee Sanders: (01:21)
I was the first White House Press Secretary to require Secret Service protection because of a credible violent threat against me. We’ve seen violence in our streets, at a congressional baseball practice, and at our Capitol, this is not who we are as Americans. To remain free we must have law and order and resolve our differences peacefully.

Sarah Huckabee Sanders: (01:46)
The radical left solution is to impose government control and censorship from the top down. But their socialism and cancel culture will not heal America, it will only further divide and destroy us. Everything we love about America is at stake. And with the radical left now in control of Washington, your governor is your last line of defense. In fact, your governor must be on the front line. So today I announce my candidacy for governor of Arkansas, and ask for your prayers and your support.

Sarah Huckabee Sanders: (02:23)
As governor, I will defend your right to be free of socialism and tyranny, your second amendment right to keep your family safe, and your freedom of speech and religious liberty. Our state needs a leader with the courage to do what’s right, not what’s politically correct or convenient. I took on the media, the radical left, and their cancel culture, and I won. As governor I will be your voice, and never let them silence you.

Sarah Huckabee Sanders: (02:55)
My dad always said, “The real test of a leader is not the way you handle the issues you know are coming, it’s rising to the moment in a crisis you can never plan for.” I’ve been tested under fire, successfully managing one crisis after another, in one of the most difficult high pressure jobs in all of government. At the table with president Trump confronting our most dangerous adversaries, like China and North Korea, winning on tax cuts, the border, and judges. Enduring relentless attacks, but still getting the job done. I was only the third woman, and the first mom to serve as White House Press Secretary. And with your support, I hope to be the first woman to lead our state as governor.

Sarah Huckabee Sanders: (03:42)
Arkansas is home. I grew up in Pine Bluff and Texarkana. I’m a proud graduate of Little Rock Central High, and Ouachita Baptist University. My husband, Bryan and I started our marriage here. And this is where we chose to raise our family. Arkansas is the land of opportunity, where Sam Walton grew a little five and dime store into the most successful business on the face of the earth. It’s the home of legends like Al Green and Johnny Cash, who pioneered a new American sound. It’s where Daisy Bates and the Little Rock Nine struck a blow against racism, and blazed a trail for civil rights. Arkansas is God’s country, the natural state. You haven’t lived until you float the clear, free flowing waters of the Buffalo River through the Ozark Mountains, or watch the sunrise on a duck hunt in flooded green timber.

Sarah Huckabee Sanders: (04:37)
I love my state, and care about our people. When small businesses first took a hit at the beginning of the pandemic, I knew we had to do something to help. So my husband, Bryan and I launched the Arkansas 30 Day Fund to raise money from the private sector to help small businesses in every corner of Arkansas keep their doors open, and save jobs.

Sarah Huckabee Sanders: (05:04)
As your governor, I will not be intimidated by the serious challenges we face. I will courageously lead. I will stand with our brave law enforcement officers, promote law and order, and keep our community safe. I will prohibit sanctuary cities and cut off funding for cities that deliberately violate immigration laws. I will fight back against the radical environmental policies, like the Green New Deal that threatened to destroy so many jobs. I will take on the bureaucracy, reduce the cost and size of government, and make it accountable to you.

Sarah Huckabee Sanders: (05:41)
I will lower the state income tax to reward hard work, allow our businesses to compete, grow, and prosper, and create more good jobs. I will champion good schools and good teachers, but also offer more choices to parents of kids in failing schools. Every child must have the opportunity of a quality education, and no child should ever be trapped in a life of poverty and despair.

Sarah Huckabee Sanders: (06:09)
Our goal shouldn’t be to take assistance away from the working poor, but to offer the right education and job training opportunities to incentivize work, and unleash hope for a better future.

Sarah Huckabee Sanders: (06:22)
We will succeed, but only if we hold the line against the attacks on our freedom, and push forward with fresh ideas under a new generation of leadership. It will be a long, hard fight, and my opponents are already turning their fire on me, but here’s the truth, as White House Press Secretary, I never had to worry about the far left and their allies at CNN or the New York Times defining me, because I have a creator who’s already done that.

Sarah Huckabee Sanders: (06:52)
I’m a Christian, a wife, a mom, a proud are Arkansan. My opponents will do everything in their power to destroy me, but I will not apologize for who I am or who I’m fighting for. I’m fighting for you. I will not retreat. I will not surrender. And I will not bow down to the radical left. Not now, not ever.

Sarah Huckabee Sanders: (07:18)
As governor, I will defend our freedom and lead with heart. I hope you will stand with me by going to SarahForGovernor.com to donate and join our movement. Thank you. May God bless America, and may God bless the great state of Arkansas.