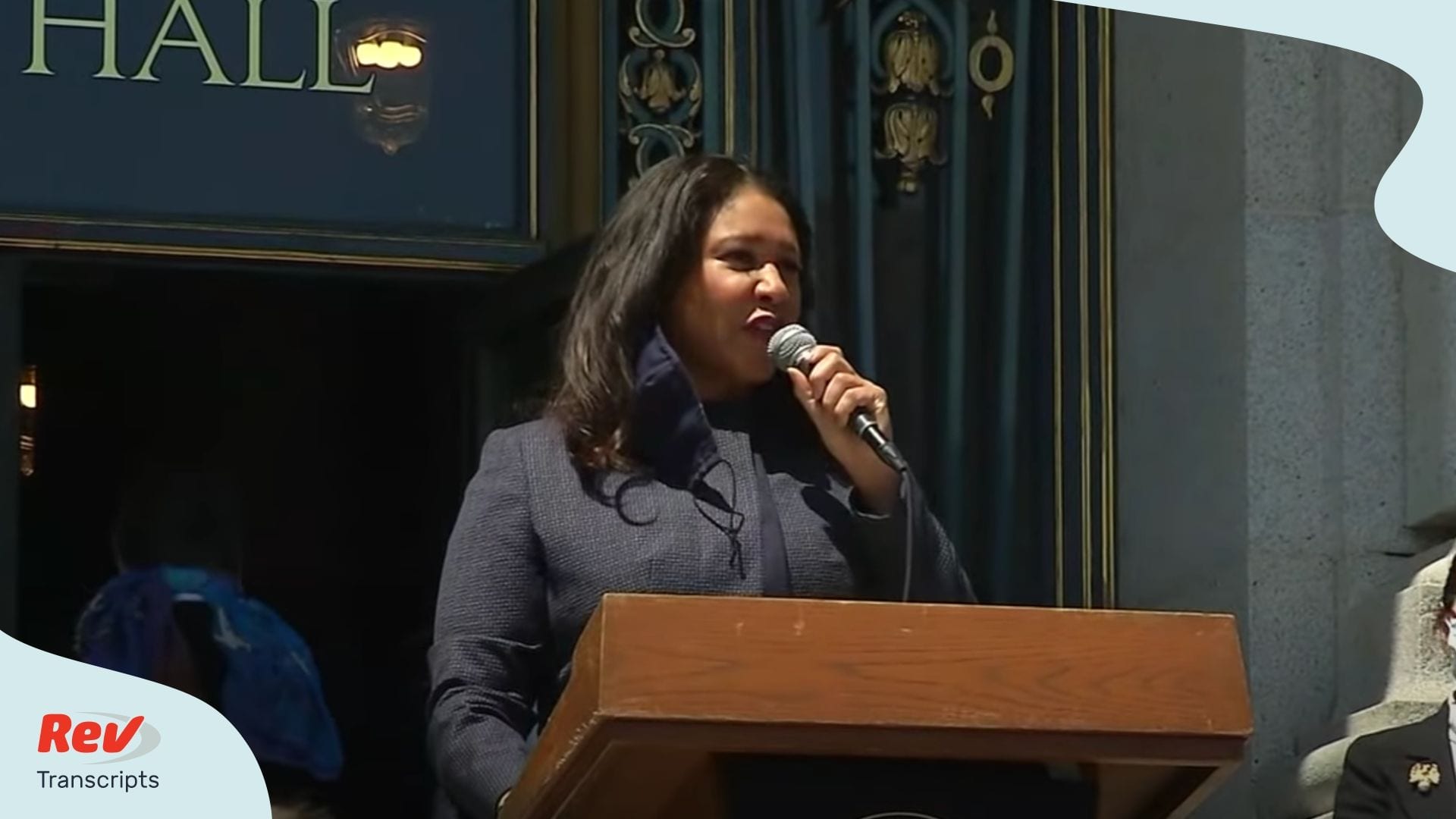 London Breed: (00:01)
First of all, I want to thank everybody that came out today to honor George Floyd’s memory. My heart has been heavy. Yes, I’m the mayor, but I’m a black woman first. I’m a black woman first. I grew up in this city. I grew up not too far from here, in public housing. I never thought I’d be mayor, I never thought I’d be in any situation to push for change. But it’s been a blessing, and let me tell you why. I grew up at a time where there was a lot of poverty, still is, a lot of violence, still is, a lot of hopelessness and frustration. I still can’t believe that I’m mayor. Because the reason why I got involved in public office in the first place, had everything to do with wanting to make sure that I’m the norm and not the exception.

London Breed: (01:38)
In 2006, sadly, my cousin was killed by the San Francisco Police Department. And at that time there was a lot of anger and hurt. This was my cousin who I grew up with, who I played with, who I kicked it with, who I loved. And when his mom showed up, wanting to know what happened, she was treated like a criminal. There was no independent investigation, and I didn’t understand why. I get it, nobody’s perfect, but my cousin didn’t deserve to die.

London Breed: (02:31)
And let me tell you, I’m so proud when I served on the board of supervisors that any time in San Francisco, there’s an officer involved shooting, there is an automatic investigation. I get it. What I’m seeing is the hurt, and the pain, and the frustration on everybody’s face right now. And for African Americans, we’ve been feeling that hurt and that pain, and that frustration for far too long. We are glad to see other people understanding our hurt, and our pain, and our frustration. And I want to be very clear, I’m in charge of this city, and as a mayor, who’s in charge of this city, I will do everything I can to push for the right policies for our law enforcement here in the city, to make sure that what we know has been happening sadly all over this country, doesn’t happen in our city. There is nothing more important to me than to do that.

London Breed: (07:14)
And I want to again, appreciate the fact that, yes, we have had a number of challenges around protests, but I understand the spirit of what the protest represent. We got to make sure people understand that we don’t want to see this happen again, and we won’t sit quietly by, and let it happen again. I understand that. So I know you already did a kneel in, and I want to tell, we got Jamie Foxx in the house, and Reverend Brown is going to introduce him in just a minute. But Jamie, I want to ask you to come out here because it’s time to do another kneel in in solidarity. It’s time to do another kneel in in solidarity. So everybody, please join me. Let’s do it.