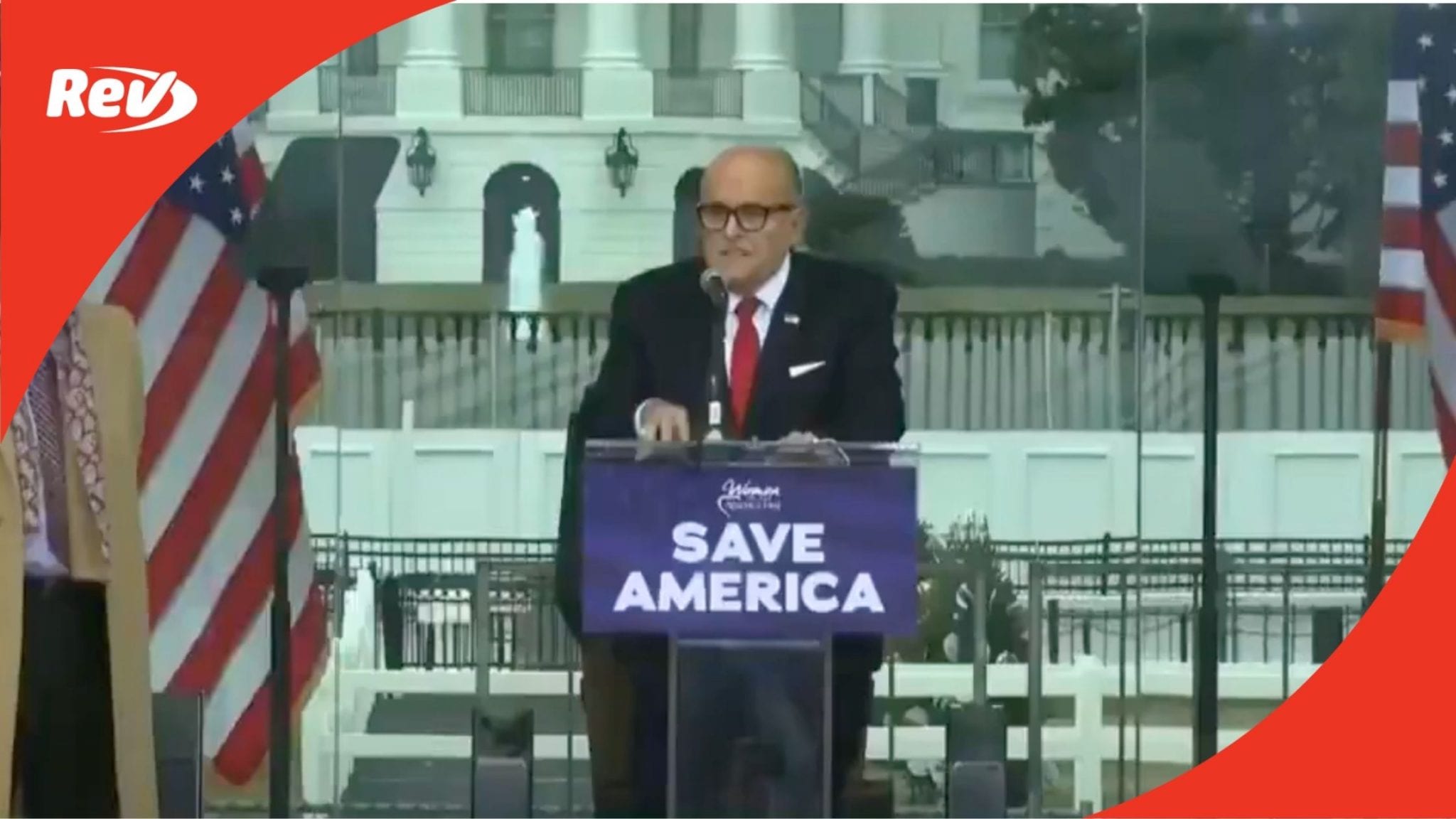 Rudy Giuliani gave a speech at Donald Trump’s “Save America” rally on January 6, before Trump protestors stormed the Capitol building in a riot. Giuliani said, “Let’s have trial by combat,” in his speech. Read the full transcript here.

Rudy Giuliani: (00:09)
Hello. Hello everyone. We’re here just very briefly to make a very important two points. Number one; every single thing that has been outlined as the plan for today is perfectly legal. I have Professor Eastman here with me to say a few words about that. He’s one of the preeminent constitutional scholars in the United States. It is perfectly appropriate given the questionable constitutionality of the Election Counting Act of 1887 that the Vice President can cast it aside and he can do what a president called Jefferson did when he was Vice President. He can decide on the validity of these crooked ballots, or he can send it back to the legislators, give them five to 10 days to finally finish the work. We now have letters from five legislators begging us to do that. They’re asking us. Georgia, Pennsylvania, Arizona, Wisconsin, and one other coming in.

Rudy Giuliani: (01:49)
It seems to me, we don’t want to find out three weeks from now even more proof that this election was stolen, do we?

Rudy Giuliani: (02:01)
So it is perfectly reasonable and fair to get 10 days… and you should know this, the Democrats and their allies have not allowed us to see one machine, or one paper ballot. Now if they ran such a clean election, why wouldn’t they make all the machines available immediately? If they ran such a clean election, they’d have you come in and look at the paper ballots. Who hides evidence? Criminals hide evidence. Not honest people.

Rudy Giuliani: (02:43)
Over the next 10 days, we get to see the machines that are crooked, the ballots that are fraudulent, and if we’re wrong, we will be made fools of. But if we’re right, a lot of them will go to jail. Let’s have trial by combat. I’m willing to stake my reputation, the President is willing to stake his reputation, on the fact that we’re going to find criminality there.

Rudy Giuliani: (03:24)
Is Joe Biden willing to stake his reputation that there’s no crime there? No. Also, last night one of the experts that has examined these crooked dominion machines has absolutely what he believes is conclusive proof that in the last 10%, 15% of the vote counted, the votes were deliberately changed. By the same algorithm that was used in cheating President Trump and Vice President Pence. Same algorithm, same system, same thing was done with the same machines. You notice they were ahead until the very end, right? Then you noticed there was a little gap, one was ahead by 3%, the other was ahead by 2%, and gone, gone, they were even. He can take you through that and show you how they programmed that machine from the outside to accomplish that. And they’ve been doing it for years to favor the Democrats.

Rudy Giuliani: (04:34)
It is a matter of scientific proof. We need two days to establish that. It would be a shame if that gets established after it’s over, wouldn’t it be? This was the worst election in American history. This election was stolen in seven states. They picked states where they have crooked Democratic cities, where they could push everybody around. And it has to be vindicated to save our republic. This is bigger than Donald Trump. It’s bigger than you and me. It’s about these monuments and what they stand for.

Rudy Giuliani: (05:15)
This has been a year in which they have invaded our freedom of speech, our freedom of religion, our freedom to move, our freedom to live. I’ll be darned if they’re going to take away our free and fair vote. And we’re going to fight to the very end to make sure that doesn’t happen. Let me ask Professor Eastman to explain as easily as we can, I know this is complicated, but what happened last night, how they cheated, and how it was exactly the same as what they did on November 3rd.

Professor Eastman: (05:52)
America’s Mayor, wonderful. Hello America. Sorry I had to say that. Look, we’ve got petitions pending before the Supreme Court that identify it chapter and verse, the number of times state election officials ignored or violated the state law in order to put Vice President Biden over the finish line. We know there was fraud, traditional fraud that occurred. We know that dead people voted. But we now know because we caught it live last time in real time, how the machines contributed to that fraud.

Professor Eastman: (06:31)
And let me as simply as I can explain it; you know the old way was to have a bunch of ballots sitting in a box under the floor and when you needed more, you pulled them out in the dark of night. They put those ballots in a secret folder in the machines. Sitting there waiting until they know how many they need. And then the machine, after the close of polls, we now know who’s voted, and we know who hasn’t. And I can now, in that machine, match those unvoted ballots with an unvoted voter and put them together in the machine.

Professor Eastman: (07:06)
And how do we know that happened last night in real time? You saw when it got to 99% of the vote total and then it stopped. The percentage stopped, but the votes didn’t stop. What happened, and you don’t see this on Fox or any of the other stations, but the data shows that the denominator, how many ballots remain to be counted, how else do you figure out the percentage that you have, how many remain to be counted, that number started moving up. That means they were unloading the ballots from that secret folder, matching them to the unvoted voter, and voila, we have enough votes to barely get over the finish line.

Professor Eastman: (07:45)
We saw it happen in real time last night, and it happened on November 3rd as well. And all we are demanding of Vice President Pence is this afternoon at 1:00 he let the legislators of the state look into this so we get to the bottom of it, and the American people know whether we have control of the direction of our government, or not.

Professor Eastman: (08:16)
We no longer live in a self governing republic if we can’t get the answer to this question. This is bigger than President Trump. It is a very essence of our republican form of government, and it has to be done. And anybody that is not willing to stand up to do it, does not deserve to be in the office. It is that simple.

Rudy Giuliani: (08:40)
God bless you. And thank you so much for your support. I know the courage it takes to be out there. I know how you get ridiculed. I know how they try to take jobs away from you. But you look in the mirror every night and you say to yourself, “I’m doing the right thing for myself, for my family, for my children, and most importantly for the United States of America.”