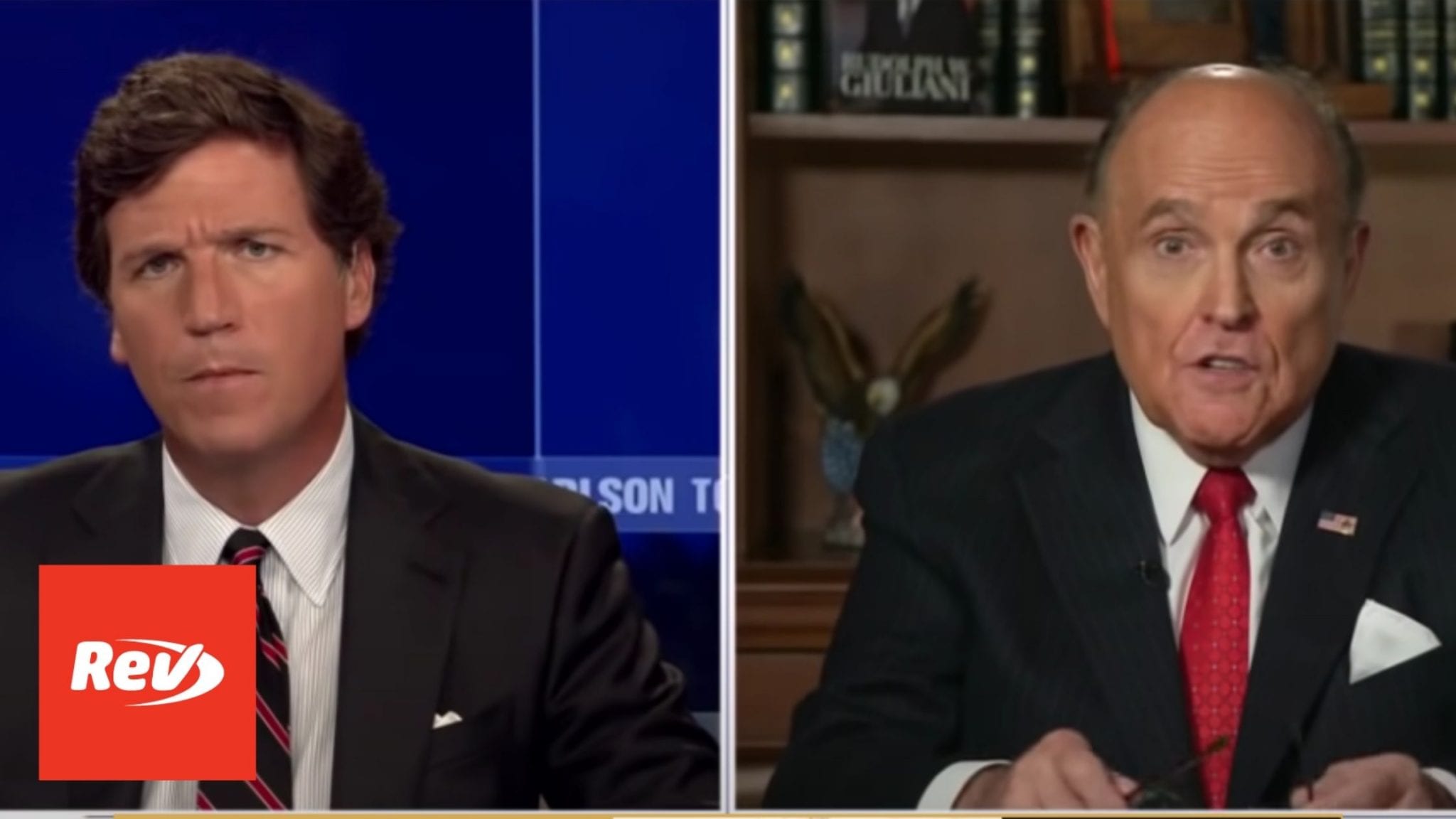 Rudy Giuliani participated in an interview with Fox News’ Tucker Carlson on April 29, 2021—his first interview since the FBI raided his home. Read the transcript of the interview here.

Tucker Carlson: (00:08)
By our count, Rudy Giuliani is at least the third attorney to have his personal communications with former President Donald Trump seized by the Justice Department. Sense a theme here?

Tucker Carlson: (00:19)
Rudy Giuliani joins us to tell us what happened. Mr. Mayor, thanks so much for coming on. Now, if you’d been reading the Twitter feed of the Lincoln Project, the democratic hacks who got Joe Biden elected, you would have known that federal agents were about to raid your home; they knew before you did, but apparently you weren’t. Tell us what happened yesterday.

Rudy Giuliani: (00:42)
What about six o’clock in the morning there was a big bang, bang, bang on the door, and outside were seven, seven FBI agents with a warrant for electronics.

Rudy Giuliani: (00:55)
And I looked at the warrant and I said, “This is extraordinary because I’ve offered to give these to the government, and talk it over with them for two years. I don’t know why they have to do this.”

Rudy Giuliani: (01:08)
The agent seemed somewhat apologetic, I might say. They were very, very professional and very gentlemanly. The only time they got perturbed is at the end of the surge when they had taken about, I’d say seven or eight electronic items of mine, which is what they took, and two of someone else’s, they weren’t taking the three hard drives, which of course are electronic devices, they just mimic the computer. I said, “Well, don’t you want these?”

Rudy Giuliani: (01:54)
Now Hunter Biden’s hard drives fall within the scope of the subpoena. The subpoena requires them to take all electronics, but they decided to leave that behind. And they also were completely content to rely on my word that these were Hunter Biden’s hard drives. I mean, they could have been Donald Trump’s. They could have been Vladimir Putin’s. They could have been anybody’s. But they relied on me, the man who had to be raided in the morning, because, what? I’m going to destroy the evidence? I’ve known about this for two years, Tucker, I could have destroyed the evidence years, a year… I didn’t destroy the evidence because evidence is exculpatory. It proved that the President and I, and all of us are innocent.

Rudy Giuliani: (02:38)
They are the ones who are committing… It’s like projection, they’re committing the crimes. Yeah, go ahead.

Tucker Carlson: (02:44)
Well, let me manage it inject to say it’s, I think, literally projection. So from what we have read in the press, the Department of Justice wants to know whether you violated FARA, the Foreign Agents Registration Act in representing foreign nationals, Ukranians, for pay; you didn’t register, they’re saying that may have been a crime.

Tucker Carlson: (03:03)
We know for a fact that a Hunter Biden did that. He didn’t register under FARA, he represented Ukrainians, he probably made a lot more than you did. He also represented Chinese nationals lobbying his dad, and he has not been charged with a FARA violation. Am I missing something here?

Rudy Giuliani: (03:18)
Yeah, you’re missing equal administration of justice, which is what we don’t have anymore.

Rudy Giuliani: (03:25)
The reality is the hard drive contains somewhere between a dozen or more violations of FARA that are spelled out completely, failure to register. The fact is it also spells out, as we now know, a clear violation of the gun act, the application is a straight out fraud. He says, “I’m not an addict.” We have a picture of him five days before smoking a crack pipe behind the wheel of a car, and then saying under oath that he’s not an addict. And it’s the left that gets all perturbed about people who are mentally unstable having guns; well he was unstable, unfortunately and tragically. I feel sorry for that part of Hunter Biden. I think his father exploited him.

Rudy Giuliani: (04:11)
But the reality is he’s still a danger to the public if he’s driving an automobile or holding a gun, but they don’t care about that.

Rudy Giuliani: (04:17)
They come extend it to my apartment, when I’m willing to talk to them civilly myself. And second, I can tell you I never ever represented a foreign national. In fact, I have in my contracts a refusal to do it, because from the time I got out of being mayor, I didn’t want to lobby, never did it to Bush, never did it to Obama, never did it with Trump. And I can prove it. Just give me an opportunity.

Rudy Giuliani: (04:44)
But they won’t. Instead they had to break down, I wouldn’t say breakdown, but smash on my doors in a frightening way, lucky I don’t get frightened very easily. I handled them very professionally, and they handled me very professionally. I want to make that point.

Rudy Giuliani: (05:00)
Also, Hunter, I am a lawyer who has prosecuted a lot more serious cases that have been prosecuted in the U.S. Attorney’s Office since I left. And the reality is that that warrant is completely illegal. The only way you can get a search warrant is if you can show that there is some evidence that the person is going to destroy the evidence, or is going to run away with the evidence.

Rudy Giuliani: (05:24)
Well, I’ve had it for two years and I haven’t destroyed it. And they also got it from the iCloud. So there is no justification for that warrant, it is an illegal, unconstitutional warrant, one of many that this department of injustice tragically has done it. It breaks my heart because I belong to the Justice Department, and I think I had a record that’s a hell of a lot better than theirs.

Tucker Carlson: (05:50)
Joe Biden said he didn’t know, the Lincoln Project knew, the guys who covered up child molestation, but Joe Biden says he didn’t know that this raid was coming. Do you take that at face value?

Rudy Giuliani: (06:05)
Maybe he doesn’t remember. I’m not sure if he can retain anything for more than about the time it takes to read it. But in any event who cares if he knew or not? And the reality is the Lincoln Project knowing means that they have a serious leak in a very important investigation. We have been warning of that for two years. My lawyer Bob Costello has written to them four times to plug up the leaks. They’ve done nothing to do that.

Tucker Carlson: (06:31)
May I interrupt you? I should’ve done this at the outset.

Tucker Carlson: (06:34)
I just want to make absolutely certain that we understand, our viewers understand what it is the Justice Department says they’re investigating. We’ve read it’s a FARA violation. Is there something else? What have they said to you about what they’re looking into?

Rudy Giuliani: (06:49)
They haven’t said anything. They won’t explain to me what they’re looking into for two years. We’ve called them five, six occasions said, “Tell us what you’re investigating, we’ll come in and address it.”

Rudy Giuliani: (07:01)
Of course, that’s ridiculous. And so I have to go as a lawyer on the search warrant; the search warrant is purportedly based on one single failure to file for representing a Ukrainian national or official that I never represented. I’ve never represented a Ukrainian national or official before the United States Government, I’ve declined it several times. I’ve had contracts in countries like Ukraine, in the contract is a clause that says I will not engage in lobbying or foreign representation. I don’t do it because I felt it would be too compromising. Here I am in the middle of representing the President of the United States on a charge that I believe he was innocent of.

Rudy Giuliani: (07:51)
I had great passion about that. If you’re a lawyer and you’re representing an innocent man, there’s no greater burden you can have. And my sole concentration, and I am so offended by the things they said about me, my sole concentration from the beginning here, Tucker, was to find evidence that would prove what I knew that he was innocent of Russian collusion, and that he was innocent of doing anything improper.

Rudy Giuliani: (08:14)
He did exactly what a president should do with the president of Ukraine, he asked him to investigate a vice-president who violated our laws over and over again, 30 years of the Biden crime family violating our laws; that is what is on the hard drive that they have censored. And that’s why they want to put me in jail.

Tucker Carlson: (08:35)
One of the great ironies is the Democratic Party is hysterical on the subject of Russia in part because they’ve taken so much money from Ukraine, which of course fears Russia and has for an awful long time. They’re being paid to hate Russia.

Tucker Carlson: (08:47)
But let me just ask you, so now they’ve taken your phone, they’ve got all your texts, they’ve got all your digital communications, so unless you’ve been in mass 12 hours a day for the last five years, is there anybody who could… No, it’s a sincere question, is there anybody [crosstalk 00:09:05] who if the Justice Department was out for you, and they’ve got every text you’ve ever sent, and every email, that they couldn’t find something to charge you with? Do you think this is going to remain a FARA investigation or could it get much bigger quickly?

Rudy Giuliani: (09:19)
Well, I think it should get much bigger. I think they should be investigated for blatantly violating my constitutional rights, the President’s constitutional rights; in the middle of the impeachment defense they invaded, without telling me, my iCloud. They took documents that are privileged, and then they unilaterally decided what they could read and not read.

Rudy Giuliani: (09:44)
So the prosecutors, the Justice Department, spied on me. And if that is not taken seriously, if that doesn’t result in their being sanctioned, the case being dismissed, and it stopping, this is no longer a free country. We might as well be in East Berlin before the wall fell. This is tactics only known in a dictatorship where you seize a lawyer’s records right in the middle of his representation of his client; you should be prosecuted and disbarred for that. You shouldn’t be prosecuting somebody else.

Tucker Carlson: (10:25)
I agree with that uncritically.

Tucker Carlson: (10:36)
It’s shocking. I hope you’ll come back. I have a feeling we’re going to be hearing a lot about this-