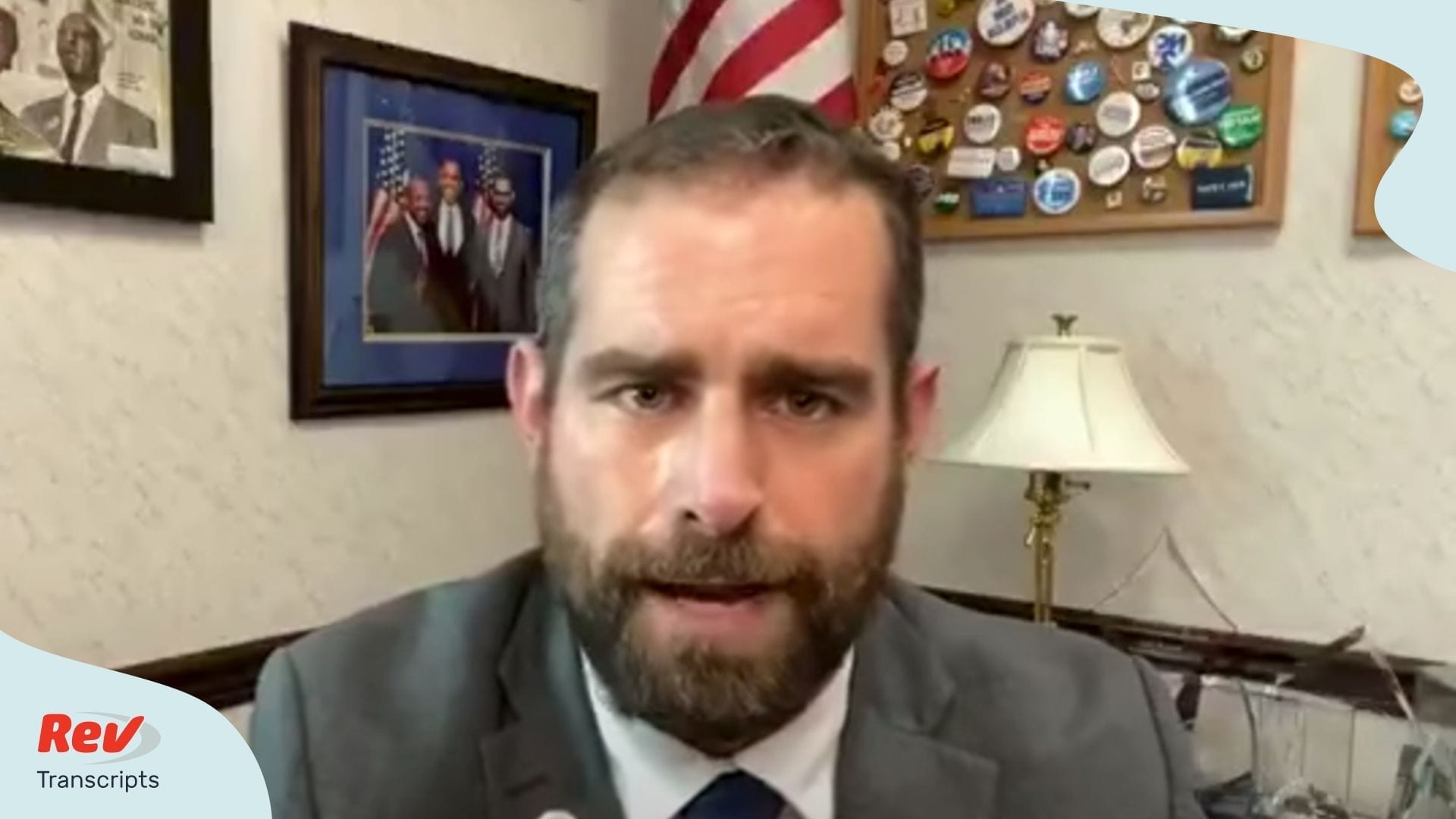 Brian Sims of the US House of Representatives released a video that went viral on May 28. He criticized a fellow member of Congress who tested positive for coronavirus and did not reveal the result. Rad the full transcript here.

Representative Brian Sims: (00:01)
Hi, everybody. Representative Brian Sims here. I am in my office in the House of Representatives. I just walked back here from the House floor. Today has been one of those kinds of days where I hope in the years to come, the decades to come after I’ve finished serving in elected office that I hope I’m able to sort of put out of my memory. I sort of don’t exactly know where to begin. This morning, apparently, House Democratic leadership learned that for as much as a week, perhaps longer, that House Republican leadership knew that at least one of their members had tested positive for COVID-19, that other members who had been exposed to him would eventually go on quarantine, but they didn’t go on quarantine until they were done serving alongside us, especially those of us that serve on the State Government Committee.

Representative Brian Sims: (01:01)
So for those of you that know, the Pennsylvania House of Representative under our gerrymandered Republican leadership has been perhaps the most active state legislature in the entire country. And during that time period, during the entire COVID-19 crisis, the State Government Committee has been the place where all of these [inaudible 00:01:18] bills to pretend that it is safe to go back to work have been going. And every single day of this crisis, the State Government Committee in Pennsylvania has met so that their members could line up one after one after one and explain that it was safe to go back to work, it was safe to go back to race car driving, or dog grooming, or getting your hair cut. Meanwhile, what we’re learning is that during that time period, they were testing positive. They were notifying one another and they didn’t notify us. I just spent the better part of the last 11 weeks sitting across the room from people who would eventually test positive and decided not to tell us. They did do some kind of quarantine. They did do some kind of contact tracing. They, I guess, being Republican leadership.

Representative Brian Sims: (02:03)
Russ Diamond, apparently, many of you know as the person that has led the charge to open up the legislature, screaming every single day in committee about how we were safe and how there wasn’t a risk has apparently been quarantining himself for weeks. Of course, he didn’t explain that to any of us when he was in committee talking with us or walking up and down the aisles or bumping into us or letting us hold the door open for him. I kind of don’t even know where to begin. Let me tell you a little bit about why this is so [inaudible 00:02:30] dangerous. First of all, let’s start with the Democratic Chairman of my committee, Kevin Boyle. Kevin Boyle’s got two young children. Kevin Boyle, every single day, comes up to this Capitol and then goes home to his wife and kids, his two young kids. And nobody decided to tell him that it was okay for his kid to be exposed, but not for these members. I know one of the members put out a statement saying, “I was looking out for my family.” But you exposing our families.

Representative Brian Sims: (02:53)
One of the members of state government has a wife who is immunocompromised. Let me tell you why it matters to me. Let me tell you why it matters to me. I wasn’t planning on talking about this until after the election, but in January, I donated a kidney. I secretly donated a [inaudible 00:03:09] kidney to somebody in my city, somebody who lives blocks away from me who was dying of renal failure. I’m so proud of having to do it, but it was not for public consumption. It was for my friends and for my family and for my staff. And every single day, every single day that our gerrymandered Republican leadership has been calling us up into this building so they could pass these ridiculous bills, pretending that it was safe to be out there, they were covering up that it wasn’t safe.

Representative Brian Sims: (03:38)
You have no idea how the people around you are impacted. And that’s why it’s so important to notify people. So here’s what needs to happen. Here’s what I think needs to happen. First of all, Mike Turzai, the Speaker of the House, needs to resign. And any member of leadership that has known what was going on, any member of Republican leadership that knew that members were testing positive, that other members were being quarantined, and did not tell those of us who were exposed to those members needs to be investigated by the Attorney General. And I think that there needs to be prosecutions. Exposing all of us up here to this crap while covering up, covering up what was going on while simultaneously telling people, telling families that it was safe to be outside, that it was safe to be interacting with other people while you were testing positive, while you were quarantining the people around you, while you were doing contact tracing, and not notifying a single Democratic member who has to show up here every single day for this crap.

Representative Brian Sims: (04:35)
There is no legislature in the country that it has met as much as the Pennsylvania legislature. And there is no committee that has met in this state legislature as much as the State Government Committee. And we have had to listen to this succession of members coming before us telling us that this was fake, that this wasn’t real, that there was no risks all the while knowing that they were testing positive and withholding that from us.

Representative Brian Sims: (04:57)
So I’ve got my eyes right now on the Republican legislature. And there’s a bunch of things that I want. I want a full blown investigation by the Attorney General, every single member of Republican leadership that knew that this was happening. I want an investigation of what kind of contact tracing that they did. The entire Democratic House of Representatives today had to jump on a call with the Secretary of Health to figure out if it was safe for us to go back to our families. I’m in a building right now surrounded by members that can’t go see their kids, that are having to call their husbands, having to call their wives, and saying, “Honey, I might’ve exposed you and everybody I love in this world because one of my colleagues tested positive, but he was protecting his family, but not protecting mine. And Republican leadership protected him.” I want a full blown investigation by the Secretary of Health. I need to know if it’s safe for us to be back in this building. This building needs to be scrubbed top to bottom.

Representative Brian Sims: (05:47)
I can’t believe that this is happening to me at work today. I cannot believe that this is what we are going through. People always say the parties are the same, or it doesn’t matter this party or that party. You know what the difference is? The difference is values and credibility. And every single day that I’ve showed up at this gerrymandered legislature, I knew that the Republican leadership that was out there was fake and it was false and it was looking out for themselves. But I never, ever, ever knew that the Republican leadership of this state would put so many of us at risk for partisanship to cover up a lie. And that lie is that we’re all safe from COVID. That lie is that social distancing isn’t important. One of these people, Russ Diamond, Russ Diamond walked around the House floor every single day without a mask on. Just a little bit ago, I was on the House floor. And at one point, only four Republican members had their masks on.

Representative Brian Sims: (07:35)
Mike Turzai, you need to resign. Shame on you. For those of you that don’t know, Mike Turzai is the Republican Speaker of the House, one of the people that has joined in going after the Secretary of Health, one of the most qualified people in this country to deal with COVID-19. And yet every single day, you have perpetuated the lie that it was safe for Pennsylvanians to be outside, that it was safe for Pennsylvanians to interact with each other. Every single day, you have dragged us to this legislature so that you could go industry by industry by industry and explain how it was safe. Even using the House as an example. I sat in state government a week ago with one of these members while it was explained to us that the room we were in was the perfect example of how safe it could be.

Representative Brian Sims: (09:32)
So I’ll continue to report back. I’ll continue to not mince my words. I’m a Democratic member of the Pennsylvania House who just found out that my Republican leadership, in a cover up to make sure that we didn’t know that COVID-19 had breached the House of Representatives, was lying to its members and covering up from its members about that. The only way we found out is because a reporter asked one of our members and our members got it out of their leadership. You belong in jail. Shame on you. And thank you to everybody that is asking how we’re doing and what’s going on. The answer is we don’t know. The answer is a whole bunch of my colleagues are on the phone right now with their loved ones saying, “I’m sorry. I’m sorry for what I might have done to you and not known that I did it.”

Representative Brian Sims: (10:13)
And it was Mike Turzai that did it. It was Republican leadership that did it. It was Russ diamond that did it. Every single day, slamming a Secretary of Health for saying that it was risky for us to be together. Every single day, walking around this House without a mask. And where are you right now? You’re in quarantine because you might be spreading a deadly disease to all of us and our families. This is shameful, this is disgusting, this is the height of Republican hypocrisy. This is what happens when Republicans gerrymander a state. This is what happens when Republicans take control.

Representative Brian Sims: (10:46)
I’ve spent so much of my time here trying to see beyond the blind disgusting partisanship. And now that partisanship has grown deadly, deadly. So no, Mike Turzai, no, Pennsylvania Republicans, no to the Pennsylvania House. I see you. We see you. My life doesn’t belong to you, the lives of my colleagues don’t belong to you, the lives of their friends, their family, their spouses don’t belong to you. And you know what? The lives of the constituents of your colleagues who you covered up for don’t belong to you either. Right now, you should be using your money, your resources, to study every single thing that those members did with your blessing. And you should be reaching out to every single one of those families, every single one of those Pennsylvanians, making sure they’re safe, making sure they’re healthy, but you’re not. You’re too busy-