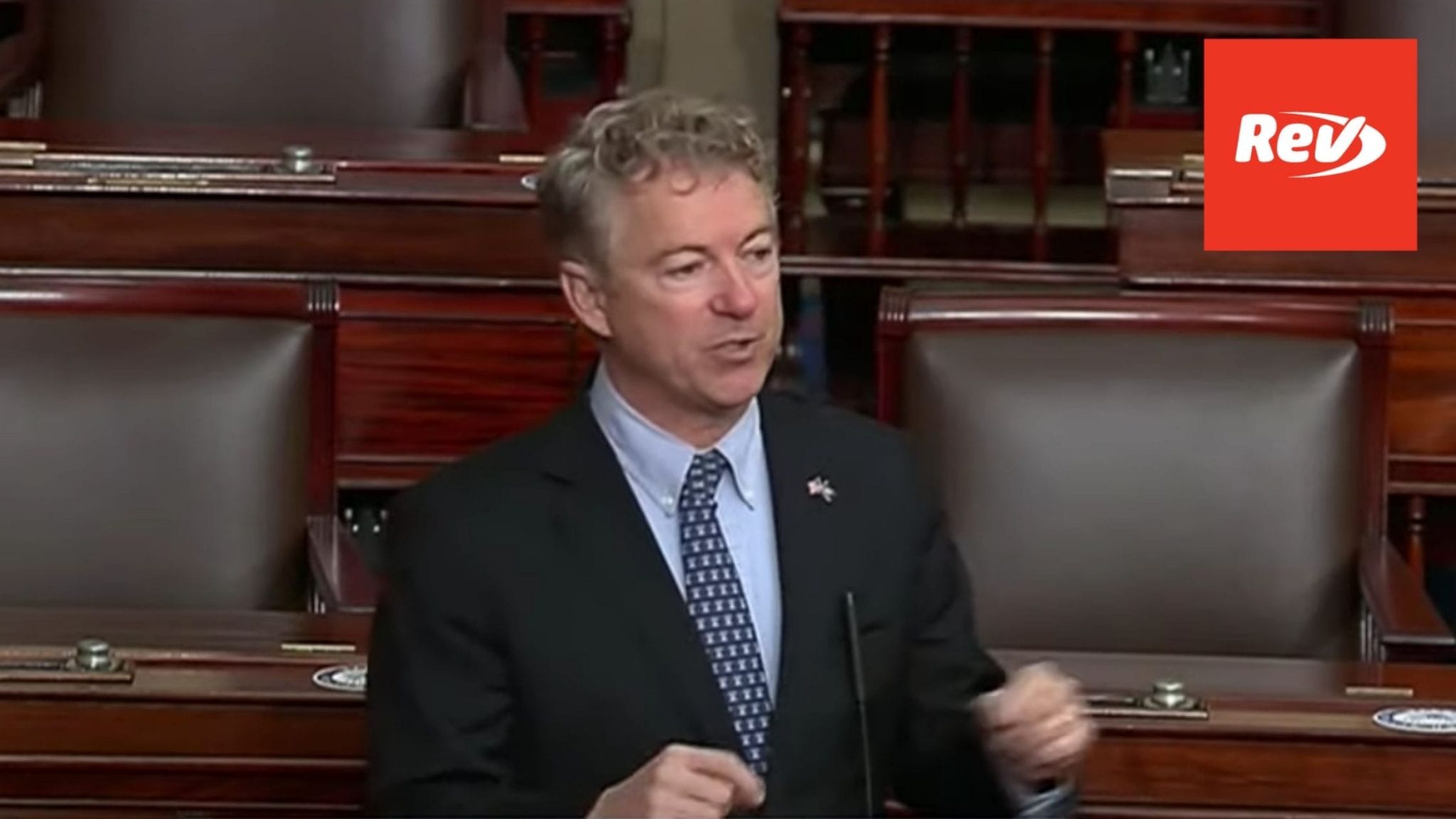 Sen. Rand Paul gave a Senate floor speech on the Trump impeachment on January 26, 2021. He called the impeachment “a sham, this is, a travesty, a dark blot on the history of our country.” Read the transcript of his full remarks here.

Sen. Rand Paul: (00:01)
This impeachment is nothing more than a partisan exercise designed to further divide the country. Democrats claim to want to unify the country. But impeaching a former president, a private citizen is the antithesis of unity. Democrats brazenly appointing a pro-impeachment Democrat to preside over the trial is not fair or impartial and hardly encourages any kind of unity in our country. No. Unity is the opposite of this travesty we are about to witness. If we are about to try to impeach a president, where is the chief justice? If the accused is no longer president, where is the Constitutional power to impeach him? Private citizens don’t get impeached. Impeachment is for removal from office, and the accused here has already left office.

Sen. Rand Paul: (00:58)
Hyper partisan Democrats are about to drag our great country down into the gutter of ranker and vitriol, the likes of which has never been seen in our nation’s history. Instead of doing the nation’s work with their new majorities in the House, the Senate, and the Executive branch, Democrats are wasting the nation’s time on a partisan vendetta against a man no longer in office. It’s almost as if they have no ability to exist, except in opposition to Donald Trump. Without him as their boogeyman, they might have to legislate and to actually convince Americans that their policy prescriptions are the right ones.

Sen. Rand Paul: (01:41)
Democrats are about to do something no self-respecting Senator has ever stooped to. Democrats are insisting the election is actually not over. And so, they insist on regurgitating the bitterness of the election. This acrimony they are about to unleash has never before been tried. Why? Because calmer heads have typically prevailed in our history and allowed public opinion to cast blame where blame is deserved. This sham of an impeachment will ostensibly ask whether the president incited the reprehensible behavior and violence of January 6th when he said, “I know everyone here will soon March to the Capitol to peacefully and patriotically make your voices heard.” Peacefully and patriotically, hardly words of violence.

Sen. Rand Paul: (02:40)
But what of Democrat words? What of Democrat incitement to violence? No Democrat will honestly ask whether Bernie Sanders incited of the shooter that nearly killed Steve Scalise and volunteer coach. The shooter nearly pulled off a massacre. I was there because he fervently believed the false and inflammatory rhetoric spewed by Bernie and other Democrats, such as the Republican healthcare plan for the uninsured is that you die. As this avowed Bernie supporter shot Steve Scalise nearly killing him and shot one of our coaches and two or three of our staff, he screamed, “This is for healthcare.” Ask me or anyone if that’s incitement. No Democrat will ask whether Cory Booker incited violence when he called for his supporters to get up in their face of congresspeople, a very visual and specific incitement. No Democrat will ask whether Maxine waters incited violence when she literally told her supporters, and I quote, that, “If you see a member of the Trump administration at a restaurant, at a department store, at a gas station ,or any place, you create a crowd and you push back on them.” Is that not incitement?

Sen. Rand Paul: (04:03)
My wife and I were pushed, and surrounded, and screamed at by this same type of mob that Maxine likes to inspire. It’s terrifying to have a swarm of people threatening to kill you, cursing at you, and literally holding you hostage until police come to your rescue. That night we were assaulted by the crowd, I wasn’t sure if we’d survive even with the police protection. But no Democrat has ever considered impeaching Maxine for her violent rhetoric. In fact, Republicans, to our credit, have never once thought it legitimate to formally sensor or impeach these Democrats. No Republican has sought to use the government to hold these Democrats responsible for Antifa and Black Lives Matter violence that has consumed our cities all summer resulting in over a billion dollars of destruction, looting, and property damage. Not one Republican said, “Oh, let’s impeach the Democrats who are inciting this.” Because it would be ridiculous.

Sen. Rand Paul: (05:07)
Many on the Democrat side of the aisle cheered them on. Kamala Harris famously offered to pay the bill for those who were arrested. I wonder if she’ll be brought up on charges of inciting violence for that now that she’s vice-president. Should Kamala Harris be impeached for offering to pay for violent people to get out of jail who have been burning our cities down? No. And no Republican has offered that, because we’re not going down the road the Democrats have decided, this low road of impeaching people for political speech. Should Republicans impeach the Democrat mayor of Seattle who incited and condoned violence by calling the armed takeover of part of her city a summer of love? Any Republicans try to impeach her?

Sen. Rand Paul: (05:58)
On June 8th, the New York Post, citing U.S. Justice Department statistics, reported that more than 700 law enforcement officers were injured during the Antifa, Black Lives Matter riots. There were at least 19 murders, including 77 year old retired police officer David Dorn. Yet, Democrats insist on applying a test of incitement to a Republican that they refuse to apply to themselves. I want the Democrats to raise their hands if they have ever given a speech that says, take back, fight for your country. Who hasn’t used the words fight figuratively? And are we going to put every politician in jail? Are we going to impeach every politician who has used the words fight figuratively in a speech?

Sen. Rand Paul: (06:47)
Shame, shame on these angry, unhinged partisans who are putting forth this sham impeachment, deranged by their hatred of the former president. Shame on those who seek blame and revenge and who choose to pervert a constitutional process while doing so. I want this body on record. Every last person here, is this how you think politics should be? Look, we’ve now got crazy partisans on the other side of the aisle trying to sensor and remove two of the Republican senators for their political position.

Sen. Rand Paul: (07:24)
Now, look, I disagreed. I don’t think Congress should overturn the electoral college. But impeaching, or censoring, or expelling a member of Congress you disagree with, is the truth so narrow that only you know the truth? We now have the media on your side saying there is only one set of facts, ones that of truth. And you can only interpret it this way. Now, we have seven senators on the other side trying to expel, sensor, or impugn two senators on this side. And I defend them, not because I defend their position. I disagreed with their position. But you can’t impeach, sensor, expelled people you disagree with. What is this coming to?

Sen. Rand Paul: (08:07)
In a few minutes, I will insist on a vote to affirm that this proceeding we are about to enter is unconstitutional, that impeachment of a private citizen is illegal and essentially a bill of attainder. And that no sense of fairness or due process would allow the judge in the proceeding to be a partisan Democrat already on favor of the impeachment. A sham, this is, a travesty, a dark blot on the history of our country. I urge my colleagues to reconsider this kangaroo court and move forward to debate the great issues of our day.